Lake Powell to drop below target level, a troubling sign for Colorado River 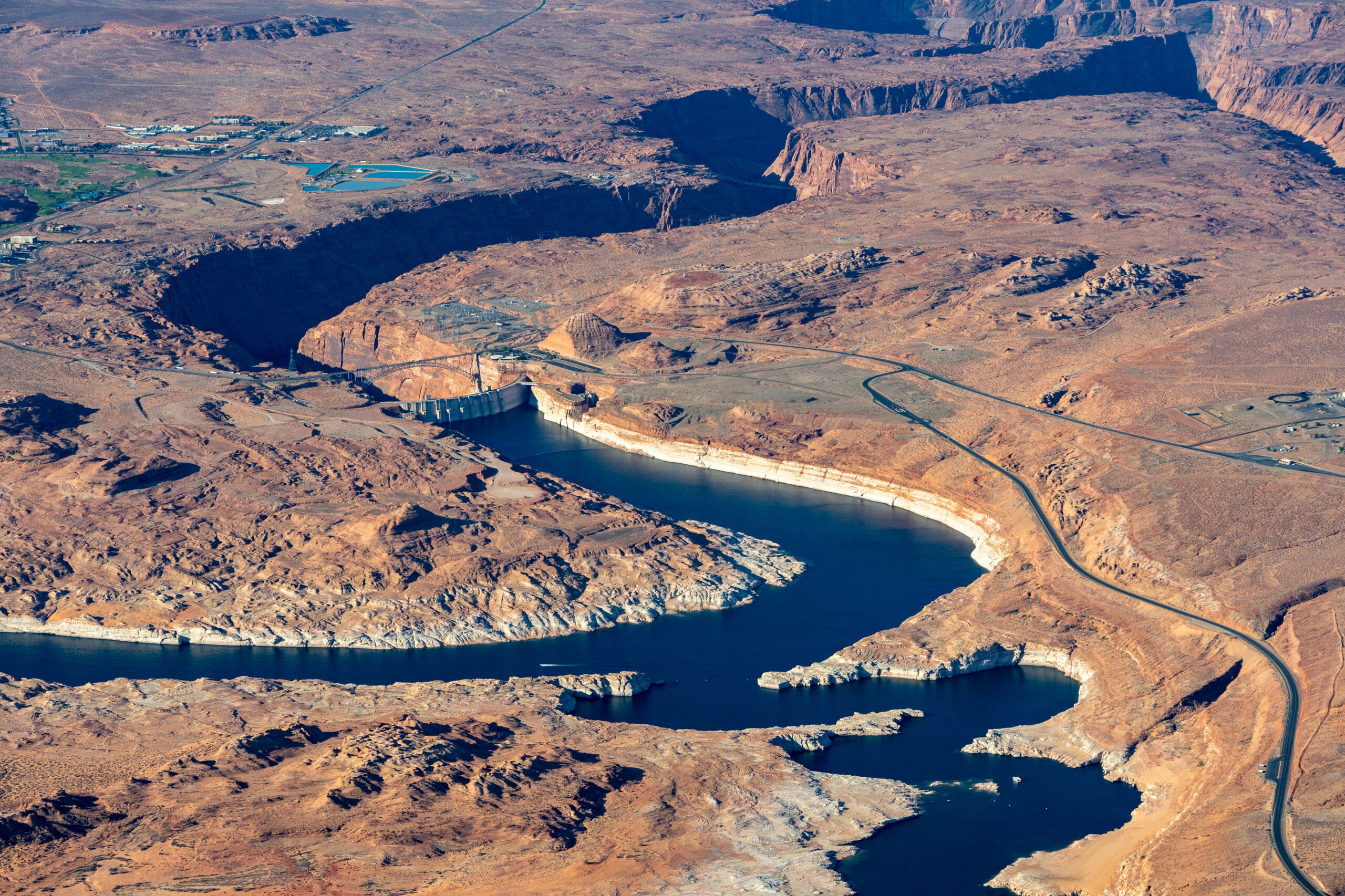 In the coming days, Lake Powell, a major reservoir on the Colorado River, is expected to drop below a critical threshold, a sign of the water stress facing the region amid a prolonged drought, warming temperatures and changes in how water cycles through the environment.

Forecasters with the U.S. Bureau of Reclamation, the federal agency charged with managing much of the West’s water infrastructure, expect Lake Powell to fall below a key low-level water mark within a matter of days. Below the threshold, a “target elevation” to keep operations at the reservoir stable, Lake Powell is at greater risk when it comes to producing hydropower. It also means the reservoir only contains a fraction — about 25 percent — of the water it was created to store.

Officials note that the low reservoir level will be temporary. The reservoir is expected to operate above the target elevation come spring, when mountain snow melts and runs off into tributaries that make their way to Lake Powell, flowing through Wyoming, Colorado, Utah and New Mexico.

But the very fact that the reservoir has reached this critical level so rapidly is a sign of increased stress on a river system that serves an estimated 40 million people and dozens of communities  in the Southwest, including seven U.S. states, tribal nations and Mexico. Southern Nevada residents receive about 90 percent of their drinking water from the Colorado River.

Chuck Cullom, executive director of the Upper Colorado River Commission, said the low water level signifies how Lake Powell and the watershed are experiencing the impacts of drought and climate change. Both are affecting the system at its source, leading to less runoff from snow and decreasing how much water flows into the reservoir, described by water managers as “inflows.”

At the same time, Lake Powell, located around the Arizona-Utah border and held back by the Glen Canyon Dam, continues to release water to Lake Mead downstream. That water serves states in the Lower Colorado River Basin: Arizona, California and Nevada. The states that are upstream of Lake Powell, in the Upper Colorado River Basin, are required to deliver specific amounts of water to the Lower Basin states in accordance with the laws governing the river.

"The decline in Lake Powell reflects the mass balance problem for the reservoir, which means that inflows into Lake Powell are less than releases downstream of Lake Powell, which cause the storage in the lake to decline,” Cullom explained in an interview this week.

When full, the water in Lake Powell sits at 3,700 feet above sea level. As of March 8, the water held back in the reservoir sat at 3,525.73 feet, inches away from the target elevation of 3,525 feet. At the current rate, the reservoir is likely to dip below that key marker in the next few days.

As part of a multi-state Drought Contingency Plan, signed in 2019, water managers identified the need to keep Lake Powell above 3,525 feet. Doing so, they said, would provide a buffer before the reservoir hit 3,490 feet, the point at which hydropower could no longer be generated by the dam (Glen Canyon Dam sends electricity to more than 3 million customers in the West).

But back-to-back years of low inflows into Lake Powell have depleted the reservoir faster than many expected when the drought plan was signed. The low inflows have been driven by less-than-average snowpack and dry conditions, which have made runoff less efficient.

John Berggren, a water policy analyst with Western Resource Advocates, said even though it’s temporary, hitting the 3,525 foot mark is a sign that water users need to plan for the worst.

“It's a big deal in the broader picture because I really think this demonstrates how quickly the bottom can fall out in this system and how quickly things can go from not the best situation to a really bad situation,” said Berggren, noting the lack of drought-busting precipitation this winter.

Water officials are expecting another year of below-average inflows. According to the Colorado Basin River Forecast Center, Lake Powell inflows are estimated at 69 percent of average. That would make the situation of balancing Lake Powell and other reservoirs even more challenging.

Last year, the U.S. Bureau of Reclamation took emergency actions, as part of the 2019 drought plan, to release water from reservoirs upstream of Lake Powell. The goal was to bring more water to Lake Powell, one of the primary reservoirs in the basin. To boost Lake Powell, the federal government has also adjusted when water is released from the reservoir.

Without taking those actions, Becki Bryant, a Reclamation spokesperson, estimated that the elevation of Lake Powell would be about 8 to 9 feet lower than it already is.

Now, Reclamation is working with the states in the Upper Basin — Wyoming, Colorado, Utah and New Mexico — to develop a framework and a specific 2022 plan to keep Lake Powell above 3,525 feet. Those plans would set the guidelines for how water is moved to Lake Powell from a series of upstream reservoirs, taking into consideration a number of factors involving water supply, recreation, hydropower generation and habitat for endangered species. The agency, Bryant said, is “optimistic that the framework and [specific 2022 plan] will be completed by early April.”

Still, those plans, part of what Colorado River officials describe as the Drought Response Operations Agreement (DROA), are a short-term approach to balancing inflows to Lake Powell. In the past, water managers have discussed other measures to keep Lake Powell at its target elevation.

As part of the 2019 drought plan, the Upper Basin states committed to exploring more conservation. The idea behind the program, known as demand management, would be to compensate water users to temporarily and voluntarily conserve water. The water would remain in the river, where it would be shepherded to Lake Powell, helping to boost the reservoir’s elevation. But creating such a program is still in the very early stages, with numerous, challenging legal details to sort out.

And tension remains in the Upper Basin, where some water users have sought to build new infrastructure to use more water, including a pipeline that would tap into Lake Powell.

In the long term, Cullom stressed the need to “consider new tools” across the entire basin to manage a river that has less water.

Water managers across the basin have already started to discuss what those tools might look like as they prepare for negotiations to rewrite the operating guidelines used to manage the river's complicated and interconnected infrastructure. The current set of management rules expire in 2026.

The federal government has said it plans to lay out a formal process for re-negotiating the guidelines this year. Even though the deadline for finishing the negotiations is several years out, complex water agreements can take multiple years to complete. At the same time, key state and federal officials have committed to a more inclusive process. In years past, negotiations have excluded Indigenous communities, who have rights to Colorado River water, and environmental groups.

Berggren, with Western Resource Advocates, said it is important that the current crisis on the river not eclipse the need to start discussing the new guidelines in an inclusive and formal way.

​​”We can't afford to lose any more time in this basin," he said.

Tribes within the Colorado River Basin hold water rights to about one-fifth of the river’s flow. Yet the United States government, states and other institutions have historically ignored Indigenous communities in decision-making on the Colorado River and created obstacles to accessing their rights. In two excellent pieces for High Country News, Pauly Denetclaw examines this history and how tribes are fighting for their water rights as new negotiations unfold. The stories also look at the legal hurdles that tribes face and the challenges in settling water right claims.

Just how much have we warmed? This, from Yale Environment 360, caught my attention:

“Spring is beginning sooner in the United States, with 97 percent of 242 locations across the country experiencing temperature increases since 1970, according to a new analysis from Climate Central.

The analysis showed that close to half of the 242 locations have warmed by at least 2 degrees F. Reno, Nevada saw the greatest increase of any city, warming by 6.8 degrees F, followed by Las Vegas, Nevada and El Paso, Texas, which warmed by 6.2 degrees and 5.9 degrees, respectively.”

“You can have all the water rights in the world, but if the resource isn’t there, it isn’t there.” That quote is from an article in the Deseret News looking at the proposed Pine Valley Water Project, a plan to pipe groundwater in Utah that could affect Nevada. The Great Basin Water Network, based in Nevada, is actively pushing back on the project.

Incredible visuals in the Review-Journal on how Las Vegas has grown and what kind of buildings developers have constructed. A good example of the power of data journalism.