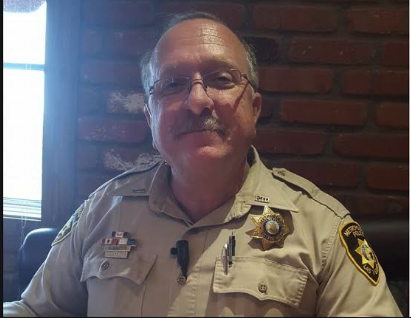 By Sarah Kleiner and Chris Zubak-Skees @ Center for Public Integrity

A Las Vegas police officer who’s raising money in the name of children with leukemia — but spending most of the cash on himself, his wife and professional fundraisers — is still employed by the Las Vegas Metropolitan Police Department.

Seven weeks after the Center for Public Integrity published an investigation about Officer William Christopher Pollock, he remains a patrol officer in the northwest section of the city, according to the police department’s human resources office.

It’s unclear whether Pollock has been placed on administrative leave at any point during the last seven weeks; the police department’s public information officer, Aden Ocampo-Gomez, has refused to answer the question.

“We do not have any investigative updates at this time regarding Officer Pollock,” Ocampo-Gomez said in emails to Public Integrity. The department previously said it was investigating the allegations against Pollock.

Pollock and his wife, Kecia Pollock, run four federal political action committees: the Children’s Leukemia Support Network, the Firefighters Alliance of America, the Heart Disease Network of America and the Police Officers Defense Alliance. Little — if any — of the money raised by the organizations goes to help people in need, according to a Public Integrity analysis of Federal Election Commission filings.

The four Pollock PACs together spent about $4 million from 2017 to mid-2019, almost all of what they raised. About $3.7 million of that went to a network of companies owned by Las Vegas telemarketer Richard Zeitlin, while the Pollocks brought home about $150,000. Most of the rest covered overhead.

The only political expenditures — less than 1 percent of overall spending — benefited Dean Heller, a Republican U.S. senator from Nevada who voters defeated in the November 2018 midterm election.

William Pollock did not respond to a request for comment via email. The phone number listed for his PACs, as reported in federal filings, has been disconnected.

When a Public Integrity reporter visited the Pollocks’ home in May, Kecia Pollock declined to be interviewed and quickly closed the door of her 3,000-square-foot home in a gated Las Vegas community.

Sheriff Joseph Lombardo, an elected official who oversees the Las Vegas Metropolitan Police Department, did not respond to an email seeking comment. Department officials declined to make Lombardo available for an interview this week.

The Las Vegas Metropolitan Police Department is an independent agency that receives some of its funding from the city of Las Vegas. Jace Radke, a spokesperson for Las Vegas, said the city would not comment on an ongoing investigation. Two members of the Las Vegas City Council previously said they found the allegations against Pollock concerning.

Clark County also contributes funding to the police department. Dan Kulin, the county’s spokesman, said neither Commissioners Marilyn Kirkpatrick nor Lawrence Weekly, the chairwoman and vice chairman of the county commission, were available for comment.

William Pollock used his position as a law enforcement official in at least one fundraising solicitation to donors, referring to himself as “Officer William Pollock, President/CEO” in the Police Officers Defense Alliance letter.

Pollock earned $118,000 in 2018 from the Las Vegas police department, plus $53,000 in benefits for a combined $170,600 in compensation, according to the organization Transparent Nevada. The Las Vegas Metropolitan Police Department hired Pollock in 2001.

In recent years, Pollock was the focus of a separate investigation — one conducted by the police department.

Pollock had been dispatched to the scene of a disturbance at a pawn shop in 2017, where he encountered a man armed with a table knife. The man allegedly grabbed Pollock’s car door and turned toward Pollock.

Pollock shot the man twice with his handgun. According to the police department, the man fell, then attempted to get up, still holding the knife. Pollock then shot him four more times, according to a civil lawsuit filed by the man’s family in 2018.

The Las Vegas Metropolitan Police Department investigated the shooting and found that Pollock, for the most part, followed department procedures. The district attorney declined to prosecute Pollock, who returned to patrol duty. The lawsuit was dropped earlier this month.