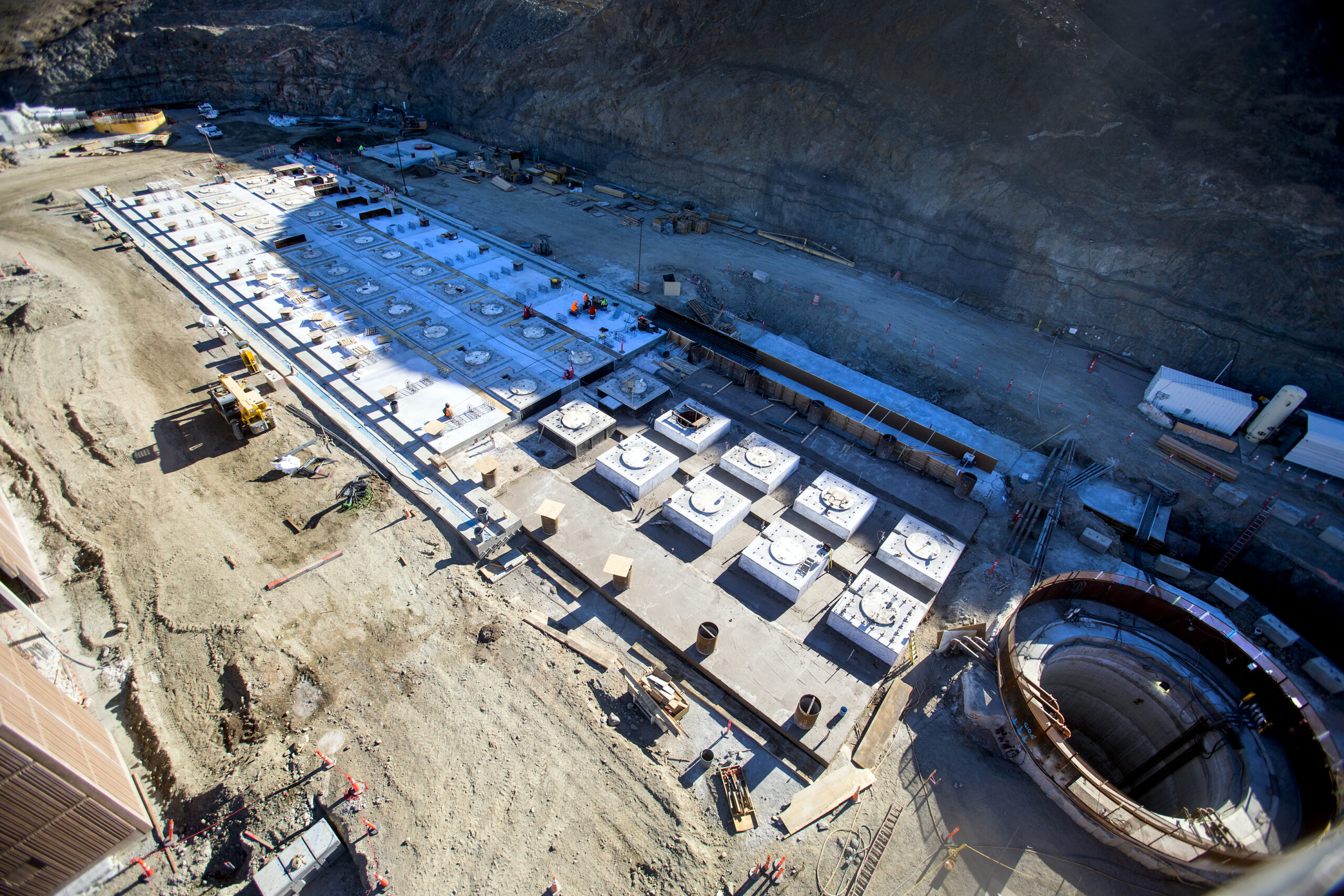 The country’s largest man-made reservoir, Lake Mead, has dropped to such a historically low level that Las Vegas water officials have completed the process of turning on a pump station that will allow Southern Nevada to retrieve water, even under extreme conditions.

The move — to turn on the pump station full bore — is an indication of how low Lake Mead has fallen over the past decade and serves as a bulwark against the possibility of Las Vegas losing physical access to its water as regional issues on the Colorado River become increasingly dire.

Without Las Vegas’ roughly $1.5 billion Lake Mead infrastructure in place, some water experts say the seven U.S. states that rely on the Colorado River would be facing even harder choices and an even more nerve-wracking situation than the shortage crisis that is playing out.

Lake Mead is about 30 percent full, and the amount of water stored at the reservoir has ticked down over the last month. As of Tuesday, Lake Mead’s elevation sat at about 1,056 feet above sea level, roughly 163 feet below the reservoir's maximum capacity.

For the Southern Nevada Water Authority, that’s a notable number because the agency’s first pumping station — which removes water from the reservoir and siphons it off to customers in the valley — becomes inoperable when Lake Mead drops below 1,050 feet above sea level.

It was never constructed to go deeper. Below 1,050 feet above sea level, the pump catches air. The top of the pump’s intake valve is already visible from the water line at Lake Mead.

The water authority’s second pumping station allows for the retrieval of water up to 1,000 feet above sea level. But the third pumping station, the one fully turned on this month and known as the “low lake level pumping station,” allows Las Vegas officials to pump out water from even deeper, with the potential to access water when other Southwest cities cannot.

Doa Ross, the water authority’s deputy general manager for engineering, said the pump station, which links to a third intake, or “third straw,” at the lake, will now serve as the city’s main pump.

“While we are in a situation where our first intake is now exposed out of water, this community had the forethought to plan for this, knowing that the drought is not going away,” Ross said.

In effect, Las Vegas watched the unfolding crisis on the river and prepared for the worst.

“We invested $1.5 billion in the third intake and the low-level pumping station for a reason,” John Entsminger, the water authority’s general manager said in a recent interview. “We knew very well that this day could come and if lake elevations continue to decline, the people of Las Vegas can take comfort in the fact that they are the most water-secure city in the desert Southwest.”

Lake Mead holds back water for three U.S. states — Arizona, California, Nevada — as well as Mexico and several Native American tribes. A future in which Lake Mead declines so much that water could no longer pass through Hoover Dam would mark a large-scale crisis for the entire Southwest.

In addition, there would be cascading ecological impacts across a watershed that has already been significantly manipulated and a river that rarely reaches its delta. In such a crisis, only Nevada, because of the third intake and pumping station, could retrieve water from Lake Mead.

“Without the third intake, Southern Nevada would be shutting its doors,” Pat Mulroy, the former general manager of the Southern Nevada Water Authority, said in an interview.

It is not out of the realm of possibility, Mulroy added, that Lake Mead could one day fall so low that water could not pass through Hoover Dam. Her assessment of the situation came down to this: “I would work from the premise that it is going to happen, not that it's not going to happen.”

Such a scenario is difficult to imagine, and there is no playbook for operating the reservoirs at such historic lows. But Colorado River water managers are increasingly being forced to navigate through a world of unknowns as different nodes across the large watershed, which supports about 40 million people in the Southwest, face stress from a lack of water.

Colby Pellegrino, the water authority’s general manager for water resources, said that models still show a zero percent probability of Lake Mead reaching dead pool in the short-term (most of these forecasts go out about two to five years).

Moreover, water users would likely face deeper cuts to lower the dead pool risk. If Lake Mead falls to about 1,025 feet above sea level, the 2007 operating rules for the river say that the states must discuss further cuts in water consumption.

“On the other side of this, though, are hydrologic realities,” Pellegrino said.

A lot of what happens next depends on how much precipitation falls across the West in the next few years. A wet year could stabilize the system and buy water managers more time to negotiate long-term operating rules (the current rules are set to expire at the end of 2025). But another dry year could make the hard management choices even more challenging.

Over the next year, forecasters with the U.S. Bureau of Reclamation, the federal water agency that helps manage Lake Mead, expect that the reservoir will fall to nearly 1,030 feet, but it could potentially fall even lower if less precipitation falls across the basin. Either way, the trajectory of the Colorado River is clear for all to see: There is less water stored in the entire system, with far less water running off from snowpack.

Climate change has contributed to prolonged drought, increasing temperatures and drying soils. Much of the water that ends up in the Colorado River starts as Rocky Mountain snowpack. In recent decades, changes in the climate have contributed to changes not only to the amount of precipitation that is falling but also the amount of snow that melts and runs off into the river.

“This isn't a drought any more,” said Brad Udall, a senior water and climate research scientist at Colorado State University. “Let's not fool ourselves. It's aridification. It's the long-term drying and warming of the American West. And it's going to continue, and it's going to get worse.”

Back-to-back dry years — years with below-average runoff — have left little water in Lake Mead and Lake Powell, a reservoir upstream. Lake Powell is facing such a high degree of risk that federal water managers recommended taking emergency action to hold additional water in Lake Powell, an action all seven states in the Colorado River Basin said they would support in a joint-letter. At stake is Lake Powell’s physical ability to generate hydropower and deliver drinking water to Page, Arizona, a city with about 7,500 residents, and the LeChee Chapter of the Navajo Nation.

But moving around water to address the immediate risks at Lake Powell could accelerate the decline of Lake Mead, and it does not solve the long-term structural issues facing the Colorado River. In the past two decades, water use has often exceeded the amount of water flowing into the river.

“There's a real chance that a really dry year could require us to do similar actions that we've already done this year or even greater actions,” Pellegrino said. “And those actions have the potential to accelerate Lake Mead’s decline beyond the projections that the bureau is showing.”

Pellegrino said all Colorado River water managers “need to be eyes-wide-open to the fact that we're really sitting in this precarious position until we’re able to rebuild storage a little bit.”

The third intake and low-lake pump station, now online, was contemplated before the current drought but after 2002, the driest year on record for the Colorado River Basin. At the time that the water authority board approved the third intake in 2005, Lake Mead was at 1,143 feet above sea level.

In 2015, the water authority broke ground on the pumping station for the third intake. The low-level pumping station was fully completed in 2020, when an underground cavern, which feeds 34 vertical pumping shafts, was filled with water from the reservoir. The infrastructure cost of the pumping station and the intake came out to about $1.5 billion, paid for by ratepayers.

Without it, Las Vegas and the Colorado River, as a whole, could have been approaching a “Day Zero” situation as Lake Mead approached 1,000 feet above sea level, which was the elevation of the second pump station. At the time, in 2005, there was far more water stored in Lake Mead, but the risk was evident. If Lake Mead did indeed fall to 1,050 or 1,000 feet above sea level, Las Vegas would have no way to get water unless other states cut their use to prop up the reservoir.

“We just decided that that risk was too big for this community,” Pellegrino said. “The risk has changed significantly, and I would say it has increased since that time.”

Over the past decade, the investment in the low-level lake pump station also provided flexibility to other Colorado River water users. The potential crisis — that Las Vegas could lose water if Lake Mead dropped to 1,000 feet above sea level — was off the table as the seven Colorado River states negotiated how to operate Lake Mead and Lake Powell in drought conditions.

Tom Buschatzke, the head of the Arizona Department of Water Resources, said in a recent interview that without the infrastructure, “we’d be in a much different place both in the context of Lake Powell and Lake Mead,” forced to reckon with the possibility of Las Vegas losing its water supply — and how to prevent that from happening within the river’s complex legal framework.

John Fleck, a University of New Mexico researcher and author of two books on the river, said that Las Vegas has become more water-secure by investing in infrastructure at Lake Mead and by steadily decreasing its per capita water consumption through aggressive conservation measures, including turf removal, watering restrictions and enforcement.

Representatives for the seven Colorado River states, tribal nations, Mexico, environmental groups, recreation organizations and communities across the basin are closely watching the renegotiation of the river’s operating rules, which are set to expire in 2026. The outcome of those negotiations could dictate how to manage the river in an increasingly arid future. In the coming months, the federal government plans to solicit comments that will help to inform the negotiation process.

“The river is currently being overused by 3 million or so acre-feet a year,” Pellegrino said. “And we've had the pleasure of having lots of storage to allow us to continue that overuse for the last 20 years. But we’re reaching the point where we no longer have a storage buffer.”