Laxalt is the favorite for governor, but the cocoon remains in place 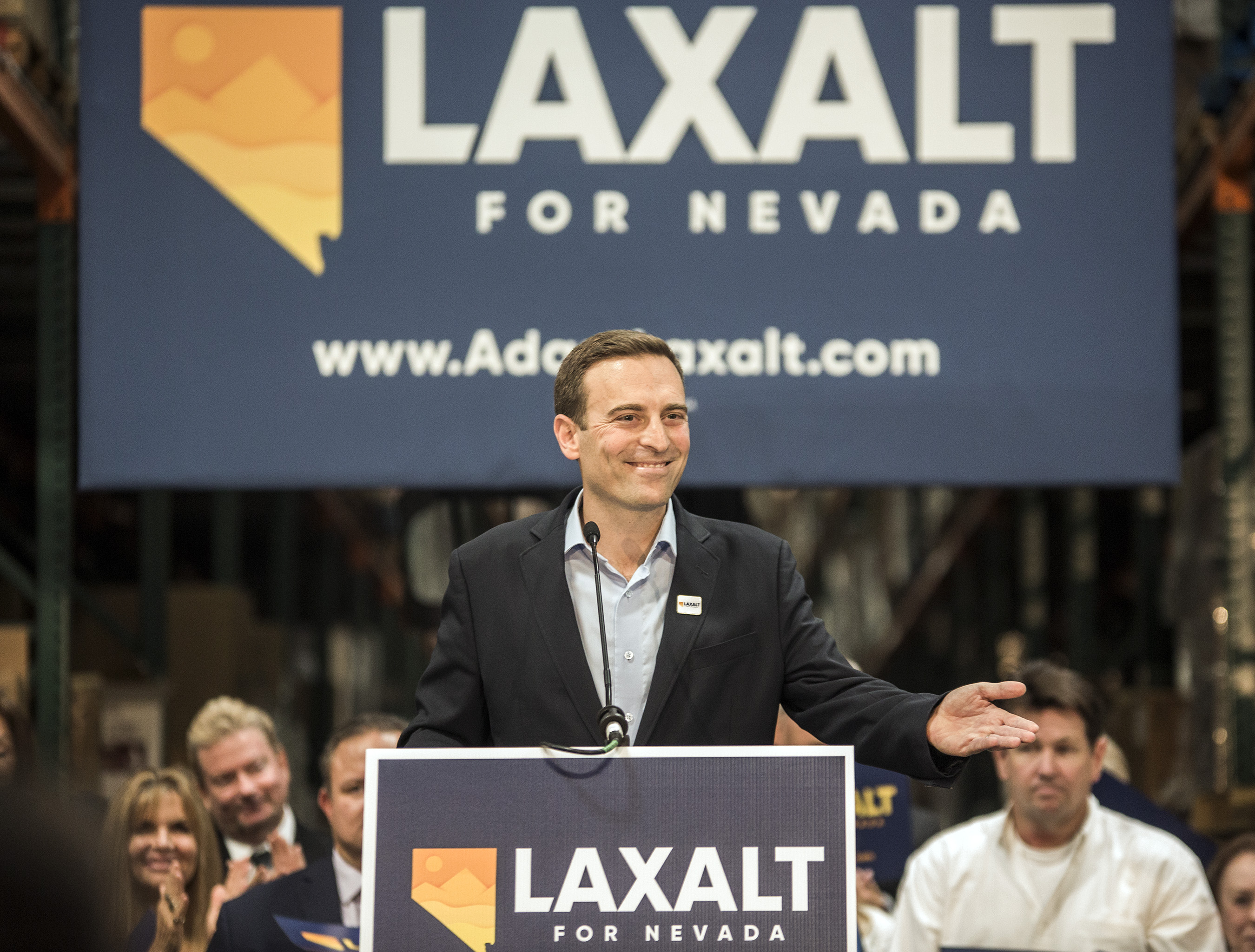 Adam Laxalt is the favorite to become Nevada’s next governor, and his rollout last week showed why.

Tightly constructed speech – it was short! -- with the gripping, candid story of his troubled early life.

Minimal media access – three minutes in Vegas! – that insulate him from potential gaffes.

This is how you do announcements if you want favorable media coverage and no damage done. From a political perspective, it was close to flawless.

But as the campaign’s approach for the state’s most important office appears to be The Laxalt Cocoon, the real question going forward is whether voters will learn much about a man who has a rare combination of living for the least amount of time in Nevada and having the least elective experience of any governor in modern history.

Laxalt, who is only 39, has only been in the state for about six years, had an undistinguished (and that is kind) legal career before piggybacking on his family name to run for attorney general in 2014. That name allowed him to tap into national money from people close to his grandfather, Paul Laxalt, the legendary former governor and senator and maybe the smoothest politician I have ever met. But his own work ethic and the Democratic Disaster of ’14 helped Laxalt the Younger pull off one of the biggest upsets in Nevada history over then-Secretary of State Ross Miller. With help from outside money, Laxalt portrayed Miller as frivolous and, well, cocooned, and the Democratic nominee did himself no favors by treating social media like a college student.

Laxalt has been a press release machine of late, focusing on resonant issues such as opioids and the Vegas shooting tragedy. But like most attorneys general, he has not gotten much attention, except for his admirable attempts to reduce a rape kit backlog and for rhetoric-filled law-enforcement summits..

But not since Paul Laxalt ran for U.S. Senate and governor while he was serving as lieutenant governor has a young politician shown the kind of preternatural ambition as his grandson has. (Let the record show Laxalt the Elder was 44 when he won for governor.)

Running for attorney general as his first foray and then, less than three-quarters of the way into his first term, announcing he wants to be governor does grandpa, who had been an elected district attorney, one better. (When any of us asked Laxalt early on about running for governor, believing he carried the ambition gene, all he talked about was re-election as attorney general.)

Laxalt would break the mold, just as he did by pulling off the unprecedented trick of losing the state’s two urban counties but crushing Miller so handily in the 15 rural counties that he eked out a victory. He is sui generis in many ways, a known unknown who is poised to win the state’s highest office despite unswerving allegiance to an unpopular president and despite being at odds with the state’s most popular elected official and the man he wants to succeed, Gov. Sandoval.

Laxalt is not favored because of a lack of credible opposition. Clark County Commissioner Steve Sisolak has and will raise millions and is a facile pol. His colleague, Chris Giunchigliani, works as hard as anyone and knows the state. And Treasurer Dan Schwartz surely is as qualified as Laxalt, although he will not have the money or institutional support.

No, the attorney general is favored because he will again dominate in rural Nevada in an off-year when the cows not only come home but they matter more because turnout will be down in the urban areas. He is favored because the Sisolak-Giunchigliani primary, should it materialize, will damage the Democrats much more than the Schwartz-Laxalt primary will hurt the GOP. And he is favored because he will have the most money – not just what he raises on his own but what is funneled to him through Super PACs and outside groups funded by Sheldon Adelson and the Kochs.

Although Adelson will help Laxalt and may be a deciding factor, a wild card is whether the Democrats can exploit that relationship. I can’t think of another politician who has been so obviously indebted to and in sync with a single private sector player.

It’s not as if you have to stretch to make the case, either, beyond the fortune Adelson already has spent on Laxalt.

Adelson’s operatives – Andy Abboud and Robert Uithoven – are Laxalt’s operatives. Laxalt’s positions, even if they run contrary to the state such as Internet gaming and pot, are Adelson’s positions. And, of course, there is one of the more astonishing stories in state annals, when Laxalt sought to intervene on Adelson’s behalf with the state Gaming Control Board, asking Chairman A.G. Burnett to take actions by intervening in a lawsuit that could have saved Adelson tens of millions of dollars. Burnett was so worried about Adelson’s influence that he taped the meeting; Laxalt’s attempt to muddy the waters, as if he was acting in the state’s best interest, do not diminish the story’s potential resonance.

But for now, Laxalt is riding high.

Few candidates have shown themselves to be as true to their campaign promises as Laxalt has. He ran in 2014 as a rock-ribbed conservative and Sagebrush rebel, promising to fight an overreaching federal government. The attorney general has been a man of his word, filing suit against the Obama Administration on issues from immigration to the sage grouse.

"Your leaders should do what they say they will do," Laxalt said last week when he announced. And he has been. (I wonder, though, if he will ever sue the Trump Administration if it attempts, for instance, to cut Nevadans off Medicaid. Laxalt will still be in that office until the end of next year, so let’s see whether those suits against Obama were principled or partisan.)

As he embarked on a 17-county tour last week, Laxalt showed he still has the facility for buzzwords, empty though they may be, when he said Nevadans should fret about the “Californication” of the state. He apparently thinks this is as clear and present a danger as “sanctuary cities,” which he also has signaled he will use as an issue.

We are a long way from the election, and I have come to expect the unexpected. But Laxalt was strong enough after such a short time in politics to send Sen. Dean Heller, who wanted to run for governor, scurrying back to a job he hates, and consign Lt. Gov. Mark Hutchison, who also eyed the big residence on Mountain Street, to retirement.

Yes, there is the mystery of what Sandoval, who clearly is no Laxalt fan and is furious about the attorney general’s support for repealing his signature achievement (The Commerce Tax), will do in the election. There’s a big difference between a tepid endorsement and outright hostility. (Team Laxalt edited a positive mention of Sandoval out of an announcement video before releasing it last week. The divorce may already be final.)

But the biggest question about Laxalt is the same one I raised in a 2014 piece for Politico headlined, “Who is Adam Laxalt?” We know a little bit more three years later. But not a lot.

And if The Laxalt Cocoon remains in place for the next year, Nevada may elect someone to the state’s highest office about whom very little is known, except for his triumph over early adversity, his facility with conservative shibboleths and his ties to Sheldon Adelson.