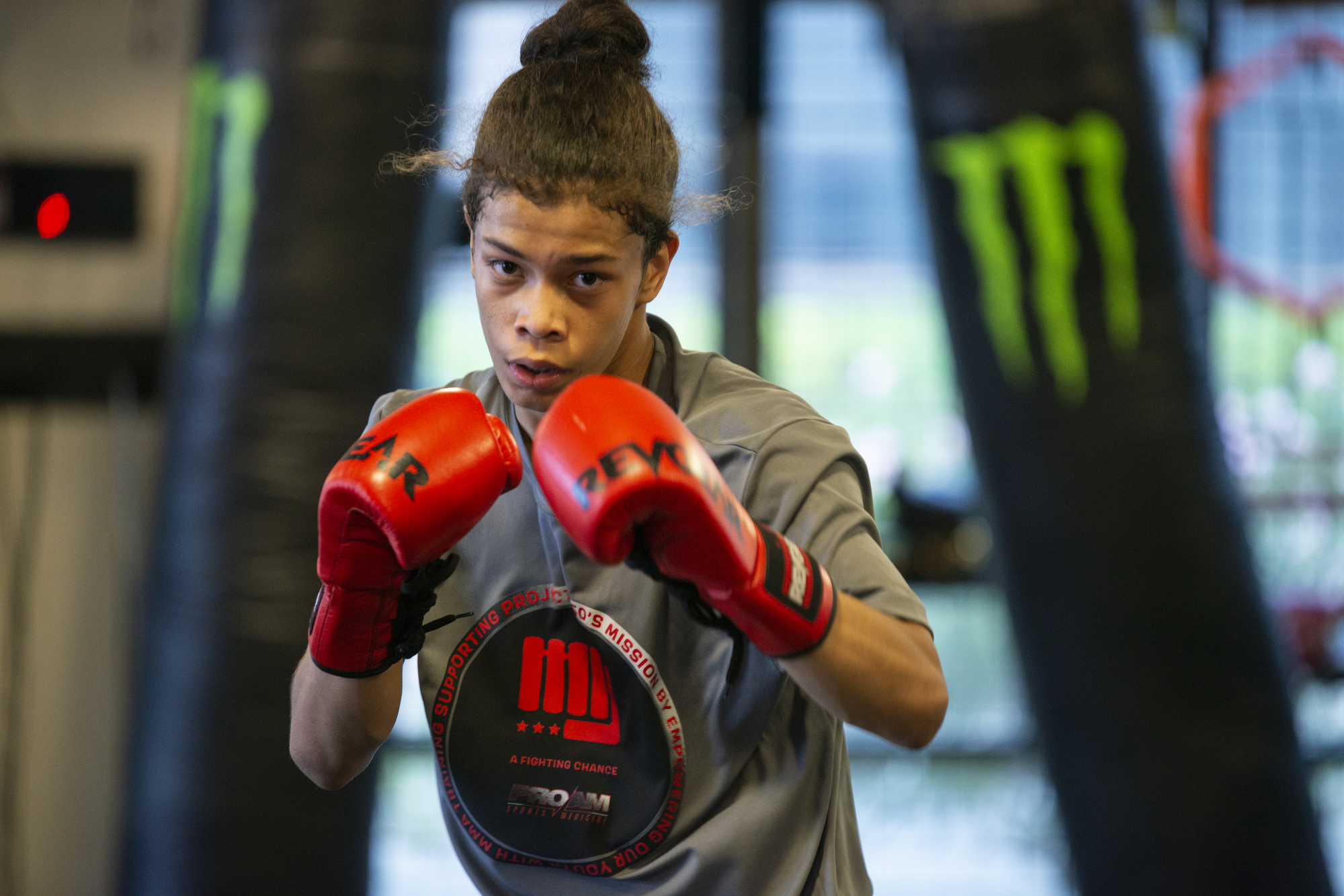 But his mixed martial arts class adds some extra steps. After each roll, once back on their knees, the students would push themselves up slightly and practice punching an opponent from below.

Parker made the drill look effortless. As other students struggled, Parker quickly went through the exercise, almost gliding across the mat. He was the first one at the end of the mat when the students did forward and backward rolls.

But there’s one thing he said he still struggles with: controlling his breathing throughout the exercise.

Parker took a small break to catch his breath, and jumped back on the mat for more training.

The ability to persevere is exactly what James Murphy, the class’ co-founder and CEO of ProAM Sports Medicine, hopes the students carry with them whether they are on or off the mat.

“They're gaining the confidence to further believe in themselves and see their way through difficult situations in life,” he said. “If they keep trying and grinding away, eventually good things will come from that.”

Murphy started the 90-day class called “A Fighting Chance” in partnership with Project 150, a nonprofit that supports homeless, displaced and disadvantaged students in Northern and Southern Nevada. The organization provides students at more than 100 high schools in the two regions with food, clothing, hygiene items, school supplies and enrichment activities — such as the MMA program — at no cost to the students and their families.

The program’s first cohort of students began training in May and graduated the beginner class last Thursday.

Murphy provided the students with uniforms they work out in, as well as sandals and boxing gloves. Syndicate MMA, a second business partner, provided the exercise space as well as the class instructors, and Experience Transport Agency, a third partner, provides the students a shuttle that takes them from Project 150’s Las Vegas office to the Syndicate’s training center.

About 20 students have already signed up for the next session of the beginner class, which starts next week. All 10 of the graduates from the first session are returning to the training center for the intermediate class.

“It’s a really great opportunity, and the parents are just excited,” said Kelli Kristo, Project 150’s executive director. “Their kids get to do something that they may not have otherwise been able to do for financial reasons.”

Murphy can relate to the housing hardships the students are facing. As a kid, he spent a year living with neighbors after his parents split up. Now the owner of a sports medicine practice, he hopes that through the class, he can help students gain the life skills and confidence they need to overcome their own challenges.

“Every kid needs a fighting chance in life,” he said. “So what we're all about is just kind of giving them as many opportunities as possible to level the playing field."

On a recent Tuesday, Mosley led the students through some warm-up exercises before pairing them up for sparing practice. Nasier paired up with his little sister, Nyele, 15, a high school volleyball player.

During the sparring practice, Nasier coached her on how to maneuver her body to avoid his glove, and once she got the hang of it, Nasier’s moves got faster and more intense. Nyele held her ground, but Nasier managed to gently graze his white glove against his sister’s cheek. Nyele laughed it off, and kept practicing.

Nyele wasn’t as interested or familiar with MMA as her brother when they began the class, but by the last week, she said she felt more confident in the sport and credits her progress to support from her trainers and one-on-one help from her brother.

“I feel like I've gained confidence,” she said. “Before, I didn't really know how to do anything like this. So this really helped me grow.”

While MMA has come more naturally to Nasier, he also feels the class has benefited him as not only an athlete, but as a person.

“It helped me realize that no matter how good you might be, it's best to learn from the beginning,” he said. “Even if you think you're the best, you can still do some things wrong.”

As Mosley walked around the gym, he said all the students have come far since their first meeting in early May.

“When you have something that you're passionate about, …you'll put in the effort,” he said. “So it's good to give them something that they can strive for and work towards it, and give them goals. Hopefully they can transfer that into everything they do.”