Months before a company lobbied the Legislature to create its own county, it purchased faraway water rights that could fuel future growth 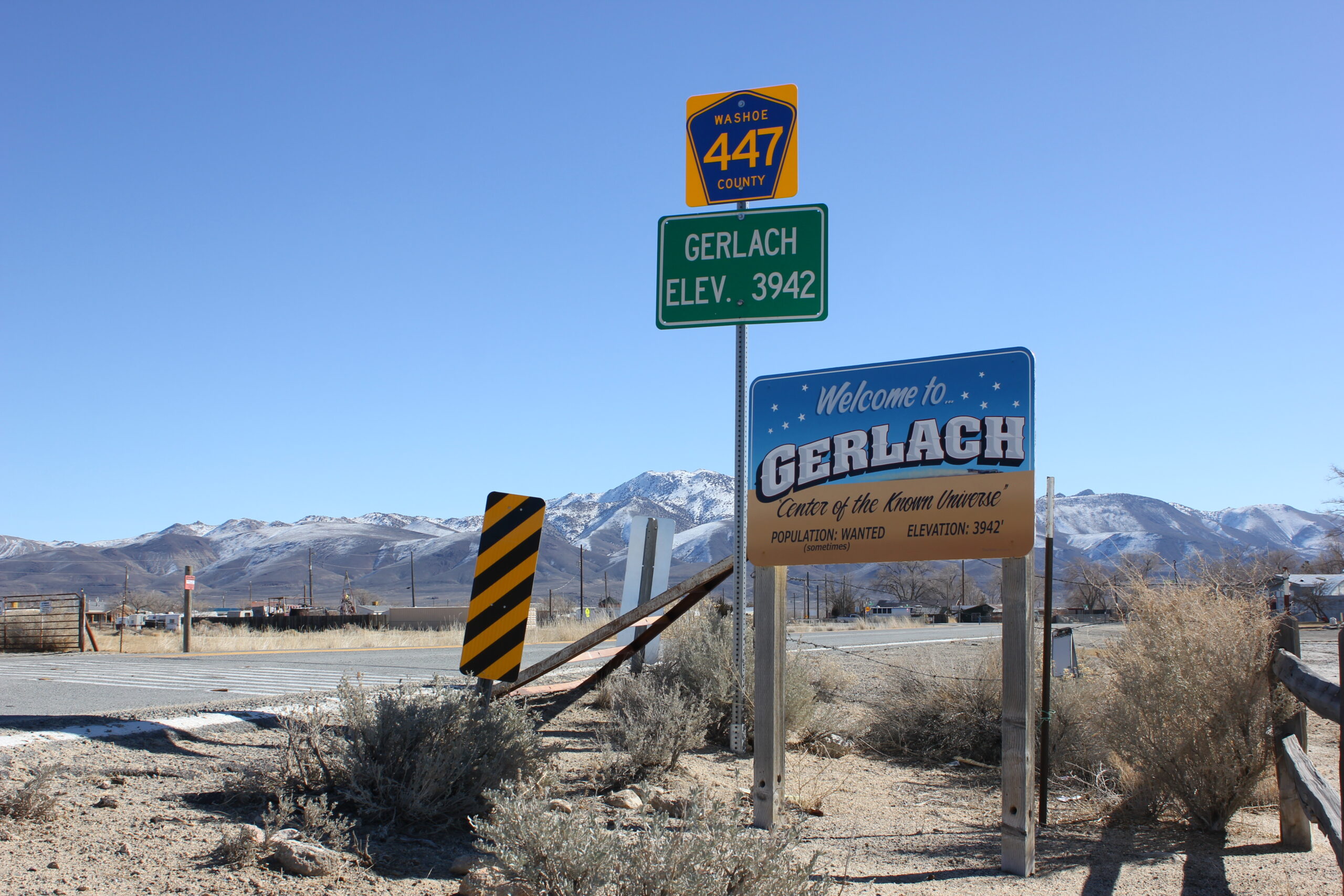 Near the edge of the Black Rock Desert, where thousands of visitors travel to the Burning Man Festival each fall, irrigation systems stand idle on a fallow field in February.

The land looks like many other agricultural operations in the state — but looks can be deceiving.

The titles to the water underneath farmland in this rural area are now held by Blockchains LLC, a company touted by Democratic Gov. Steve Sisolak and lobbying lawmakers for a new statute that could effectively give the private cryptocurrency business the sovereign powers of a county.

Blockchains, which bought about 67,000 acres in and around the Tahoe Reno Industrial Center in 2018, briefed lawmakers this week on plans to develop “Painted Rock Smart City.” To do so, Blockchains wants Nevada to create “Innovation Zones,” a pathway for large-scale developers focused on technology to break away from existing counties if they make major investments.

Sisolak backed the concept in his State of the State speech earlier this year, singling out the company, which has donated thousands to the governor and other politicians (Blockchains and its CEO Jeffrey Berns also have donated to The Nevada Independent, which discloses all donors).

“Following the passage of my Innovation Zone legislation,” Sisolak said in January, “Blockchains LLC has committed to make an unprecedented investment in our state to create a smart city in northern Nevada that would fully run on blockchain technology — making Nevada the epicenter of this emerging industry and creating the high-paying jobs and revenue to go with it.”

A new city — Blockchains wants to build about 15,000 dwelling units — will require finding water in an area where it is scarce. The industrial center’s water district is committed to serving Blockchains a portion of water, according to its service plan. But the allocation is not enough potable water to support a city projected to have more than 36,000 residents and 22 million square-feet of industrial development.

To get the water it needs, Blockchains is looking at importing it from rural Nevada.

"Most of the water we’ve looked at is up north,” Lee Weiss, the company’s executive vice president said in an interview. “The water we’ve recently acquired is still in Washoe [County].”

The company, Weiss said, has looked in other areas, including in Humboldt County, noting that it has “been looking at water deals and potential ones since we first were interested in the land.”

At the edge of the Black Rock Desert

In late November, Blockchains entered into agreements for a cache of faraway water rights for more than $30 million, according to documents filed with Washoe County recorder’s office. One month later, state officials received documents to put the water in Blockchains’ name. The water, primarily used for agriculture, is in northern Washoe County outside the town of Gerlach.

If fully permitted and transferred about 100 miles, the water could help fuel growth in the company’s futuristic city at the center of the state’s economic development strategy. The water would be enough to fill thousands of football fields to a depth of one foot — each year.

Even if the company moved a portion of its water to its planned town near Reno, such an action could cause environmental damage and face a litany of local, state, federal and tribal permitting challenges. Infrastructure needed to convey the water could cost hundreds of millions of dollars.

When a developer tried to export water from the area in 2007, the Pyramid Lake Paiute Tribe, Washoe County, the U.S. Bureau of Land Management and the Sierra Club all raised concerns.

"The Pyramid Lake Paiute Tribe is fiercely protective of its water resources, and 15 years ago, the tribe opposed an effort to move this same water from the San Emedio Basin to Fernley,” said Chris Mixson, an attorney for the tribe. “We’re watching these water rights very closely.”

There are also lingering questions about how Blockchains plans to manage sewage capacity for a new city along the Truckee River. Wastewater treatment can prove costly, and the tribe, along with other water users, would likely contest any plans to discharge additional effluent in the river.

Based on the advice the company has received, Weiss said he was confident Blockchains could move water in a way that was environmentally sound and did not conflict with other water use.

“We’ve looked at other potential purchases where the obstacles were much more than the ones here,” Weiss said, adding that Blockchians rejected other deals over environmental concerns.

Meghin Delaney, a spokesperson for Sisolak, did not respond to emails about whether Sisolak was aware of the company’s water portfolio or had concerns about water related to the project.

Under one draft of the legislation, a developer looking to create an “Innovation Zone” must show the Governor’s Office of Economic Development that they have “secured or can secure access to public utilities and natural resources necessary for the development proposed for the zone.”

An acre-foot of water can serve a little more than two homes per year in the Reno area.

A portion of the water, according to the state’s database of all water rights, is in the San Emedio Basin, outside of the Pyramid Lake Paiute Tribe’s reservation. The water is used to irrigate land at Empire Farms, according to records, and sits in an area used to generate geothermal power.

The second collection of water is tied to farming in Hualapai Flat, below the Granite Range and near the playa that hosts Burning Man each year. Hualapai Flat is also home to the iconic Fly  Geyser, which is located on a ranch that was purchased by the Burning Man Project in 2016.

For years, developers have eyed moving the water to fuel municipal and industrial development.

Blockchains purchased its water from Sonterra Development Company. Sonterra, controlled by Wade Company and Flagstone Fernley Holdings, had planned to develop land in Fernley. In June 2019, Sonterra sold its Fernley lands, according to an agreement signed with Blockchains.

In 2007, Sonterra Development Company proposed a pipeline to transfer the agricultural water to Storey County, where the Tahoe Reno Industrial Center is located, and Lyon County. At the time, Sonterra told state water officials that the project was estimated to cost $100 million and take about 10 years before the agricultural water was put to municipal use, records show.

Others have sought to pipe water out of the area. At Hualapai Flat, another entity, High Rock Holdings LLC, applied with the state to ship roughly 10,000 to 14,000 acre-feet to many of the same locations in 2007, according to a protest Washoe County filed with state water regulators.

Finding water to fuel growth in and around the industrial center has long proved challenging.

The industrial center, home to the Tesla Gigafactory, is located along the Truckee River, which is fed by snowpack in basins around Lake Tahoe and empties into Pyramid Lake. Along the way, the Truckee River is used as a source for drinking water in Reno, Sparks and Washoe County. Through a canal, some of the river is diverted to irrigate farms in and around Fallon.

As with many watersheds, there are increasing and often competing demands on the Truckee River, with little water to spare. The river is tightly regulated to protect water quality and Pyramid Lake. With limits on the river, developers have looked elsewhere, only to meet a slew of challenges.

Weiss said the company continues to look for more water to support the project.

“We recently committed to purchase certain water and we’re out there looking for more and always evaluating what our future needs are going to be and how we can fulfill those needs, along with assistance from our advisors, including our water counsel,” Weiss said.

When Sonterra and High Rock Holdings proposed exporting water to western Nevada in 2007, they faced pushback from environmental groups and entities at various levels of government.

In a protest filed with state water regulators, the Bureau of Land Management raised concerns that exporting too much water — and transferring the use from agriculture — could harm local springs and limit future growth in an area with potential for geothermal and outdoor recreation.

In 2007, the Pyramid Lake Paiute Tribe told state officials that taking water from the San Emedio Basin could hinder decadeslong efforts to restore Pyramid Lake. For years, the tribe has worked with the federal government and Truckee River users to improve conditions for two endangered fish, the cui-ui and the Lahontan cutthroat trout. Recreation at Pyramid Lake is central to the tribe’s economy.

The Sierra Club and the Great Basin Water Network filed a similar challenge.

Were Blockchains to move its water, it is likely that many of the same entities would file protests. The Burning Man Project, which has water rights in Hualapai Flat, declined to comment, but the organization has been involved in water-related issues in the area. The nonprofit recently submitted comments on a proposed geothermal project and expansion near Gerlach.

When it comes to transferring water from farms to cities, Nevada law requires developers meet a high threshold to prove their project will not harm the public or existing water rights in an area. They must prove a project is environmentally sound and not detrimental to the public interest.

State regulators never ruled on the merits of the 2007 proposal. In 2010, the state denied the project; Sonterra’s plans for the water had been put on hold after the housing market crashed.

Existing water at the industrial center

As the economy recovered, the area in and around Reno began to grow quickly.

The industrial center played a pivotal role in that growth. Mirroring the economic development strategy of other states, former Nevada Gov. Brian Sandoval used tax incentives to lure Tesla and other companies to the park. But for long-term growth, there was a need for more water.

Over the past few years, the industrial center’s water district negotiated with local governments to build a pipeline that would send treated effluent to the industrial park. The project was cast as a win-win, keeping effluent out of the river and providing reclaimed water to grow businesses.

The industrial center’s water district history may appear to offer a precedent for the Blockchains proposal to give private interests the power of local governments. For years, the water district’s board and operations were controlled by the industrial park’s developer. After the district tried to use eminent domain, as reported by The Nevada Independent, it restructured its operations.

In January, the Storey County Commission became the district’s ex-officio board of trustees.

According to the service plan for the water district, known as the Tahoe Reno Industrial General Improvement District, the treated effluent will go into what is known as a “process water” budget.

Out of that budget, Blockchains is entitled to 1,800 acre-feet of water, according to the plan.

If Blockchains wanted to import water, it’s also unclear whether the district would be involved, especially if the company effectively forms a local government. Shari Whalen, who operates the water district, said that “Blockchains has not contacted us about any water importation project.”

In the meantime, she said the water district is reviewing the proposed legislation.

“The district is concerned about the bill draft, and we have questions about it,” Whalen said.