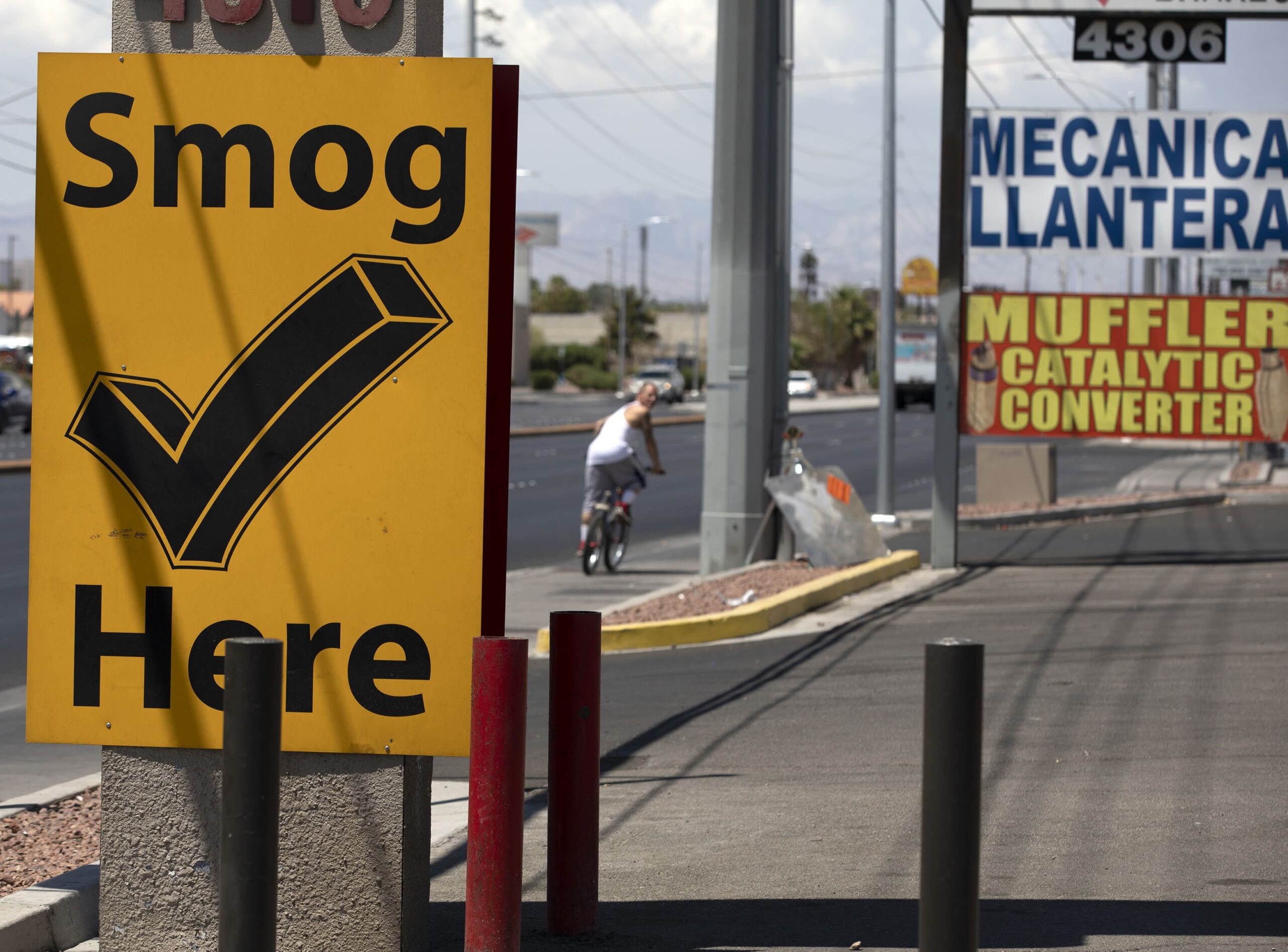 East Las Vegas, made up of approximately 66 percent Latino residents, is one of the Nevada communities most vulnerable to the harmful effects of poor air quality.

But a grant from the Environmental Protection Agency announced in July may help. The so-called “Buen Aire Para Todos” (Good Air for All) project, a collaboration between ImpactNV, Desert Research Institute, the City of Las Vegas, the immigrant advocacy group Make the Road Nevada and the Las Vegas-Clark County Library District, aims to use $300,000 in funding to bring the harmful air quality up to a healthier standard.

With less greenery compared to newer, master-planned areas such as Summerlin, pollution from major highways, homes without air conditioning and income levels lower than that of the city at large, residents in the East Las Vegas neighborhood face greater difficulty in obtaining resources against the climate crisis. On a day-to-day basis, the air quality levels are typically in the moderate zone, which means residents are advised to limit time outdoors if they are more at risk to air toxins.

“There's not a lot of green space. So there's a lot of emissions from vehicles and a lot of extra heat as well,” ImpactNV Director Lauren Boitel told The Nevada Independent.

Within the next two years, stationary and mobile outdoor sensors, as well as indoor sensors, will monitor the air quality while providing real-time data for community residents and the City of Las Vegas. The information from the sensors will help pinpoint where solutions, such as placing air filters in homes, are most needed.

Ten PurpleAir devices – sensors that glow based on air quality and provide data to an online map — will be installed on public buildings and street lights and placed in other public areas to make up for a low number of air quality stations in Las Vegas and little to no stations in the East Las Vegas area.

In collaboration with local business owners, 10 mobile sensors will also be attached to food carts and food trucks — places where workers can be exposed to dangerously high temperatures and are more vulnerable to street air pollution as well as their vehicles’ own pollution. Twenty sensors will also be placed in households of voluntary participants.

Lead-based paint and fewer ventilation systems in older homes add to the issue of air pollution in indoor settings because many of the homes in East Las Vegas have not been renovated.

“You have older houses, in those neighborhoods that could … not have adequate ventilation indoors. So they cannot really send out the pollution that is either penetrating from outdoors into [the] indoor environment or [generated] in the indoor environment,” said Lung-Wen Antony Chen, director of the Urban Air Quality Program at the UNLV School of Public Health.

However, he explained that indoor air quality is an area that still needs to be further explored because of the lack of data on different air filters. The air quality monitors will help play a large role in doing so.

Replaced monthly, highly energy-efficient air filters will be placed within homes to help protect against excessive dust and airborne particles. This will continue over the course of a year to test the filter’s effectiveness and is a small step in improving air quality. Participants will be given a stipend for their involvement in the project.

Spreading community awareness about how to improve air quality within homes and the health consequences of poor air quality is a crucial step in the project. Planned informational sessions will teach attendees how to understand the air quality index (AQI), how to reduce toxins in their own homes and how to beat the heat.

Make the Road Nevada, a partner of the “Buen Aire Para Todos” project, will be working with East Las Vegas community members and finding possible solutions to issues they are facing during the organization’s first air quality campaign.

“We really try and engage our community members to have conversations around the way that the environment is impacting their daily lives,” said Audrey Peral, director of organizing at Make the Road Nevada.

The Eros Project – based on a nickname for paleteros (popsicle vendors), eloteros (street corn vendors) and other street food vendors – has been a long-term outreach campaign at Make the Road Nevada. With increasingly intense heat waves because of climate change, it has become more dangerous and difficult for street vendors to work outside for extended periods of time.

Started pre-pandemic, the project worked to bring resources to vendors to guard against extreme weather and also partnered with local credit unions to provide safe and reliable banking systems such as Venmo and Zelle for undocumented workers. The clean air project will be a new tenet of the campaign in hopes of providing solutions for these workers.

“Knowing that firsthand, these are the folks that are outside on a daily basis so they're the ones that are really being impacted by these extreme heat and the extreme weather changes that are happening and the heat island effects that we're facing on on our parts of town,” Peral said.

Latinos at a higher risk of serious health issues

Residents in East Las Vegas face dire consequences of climate change as a result of redlining – a discriminatory practice that has led to neighborhoods made up predominantly of people of color being located in hazardous or less-established areas.

“One of the big areas of opportunities for East Las Vegas is because of the lack of air monitoring and having some of the worst environmental justice indicators in terms of air quality in that area,” Boitel said.

Ozone, a form of air pollutant, can come from vehicles, industry and other smog formation. From 2018 to 2020, Clark County had an average of 21.7 days with high levels of ozone levels, prompting the American Lung Association to give the county a grade of “F” for air quality.

In fact, Las Vegas and Henderson are ranked as the 11th most ozone-polluted cities in the United States, with the majority of pollution coming from vehicle exhaust engines producing chemical-heavy diesel particulate matter — which East Las Vegas is experiencing firsthand.

The county also earned an “F” grade for high levels of air pollutant particulate matter under 2.5 micrometers — known as PM 2.5.

When a person is exposed to the pollutant for long periods of time, the inhaled particles can flow from the lungs to the bloodstream, causing asthma, heart disease, pulmonary disease and even lung cancer.

Data show a higher prevalence of certain respiratory health issues in the area: In the ZIP code of 89101, which includes the East Las Vegas Library, almost 10.1 percent of adults suffered from chronic obstructive pulmonary disease in 2019, compared to 5.6 percent in the Summerlin ZIP code of 89144.

“This [is an] older neighborhood with relatively high population density, so that means there is more increased traffic volume in those areas. So that means that there could be more air pollution compounded by motor vehicles for people living there,” Chen told The Nevada Independent.

Advocates see electric vehicles as one way to mitigate the ongoing air quality crisis. Legislation passed in 2021 paves the way for additional charging stations for electric vehicles, as well as other clean energy initiatives, could bring Nevada closer to its goal of reducing carbon emissions to net-zero by 2050.

“Electric vehicles, of course, are pretty expensive, but you can probably replace the public transportation buses with electric vehicles in the near future. That can help to reduce the traffic emissions,” Chen said.

For now, the “Buen Aire Para Todos” project will help collect data to provide solutions aimed at combating the air quality crisis. With the help of the grant, sensors and educational programs will begin within the next few months.

But aside from the technology, organizers say the community aspect of engaging with residents who are experiencing pollution firsthand is one of the most important parts of the project.

“We've been able to collaborate now with new entities,” Peral said. “That's gonna really help put this research down on paper and to make it something factual so that we can then use it to really try and implement some policies that are going to be helpful for our community.”