On the Record: Where do top candidates stand on abortion? 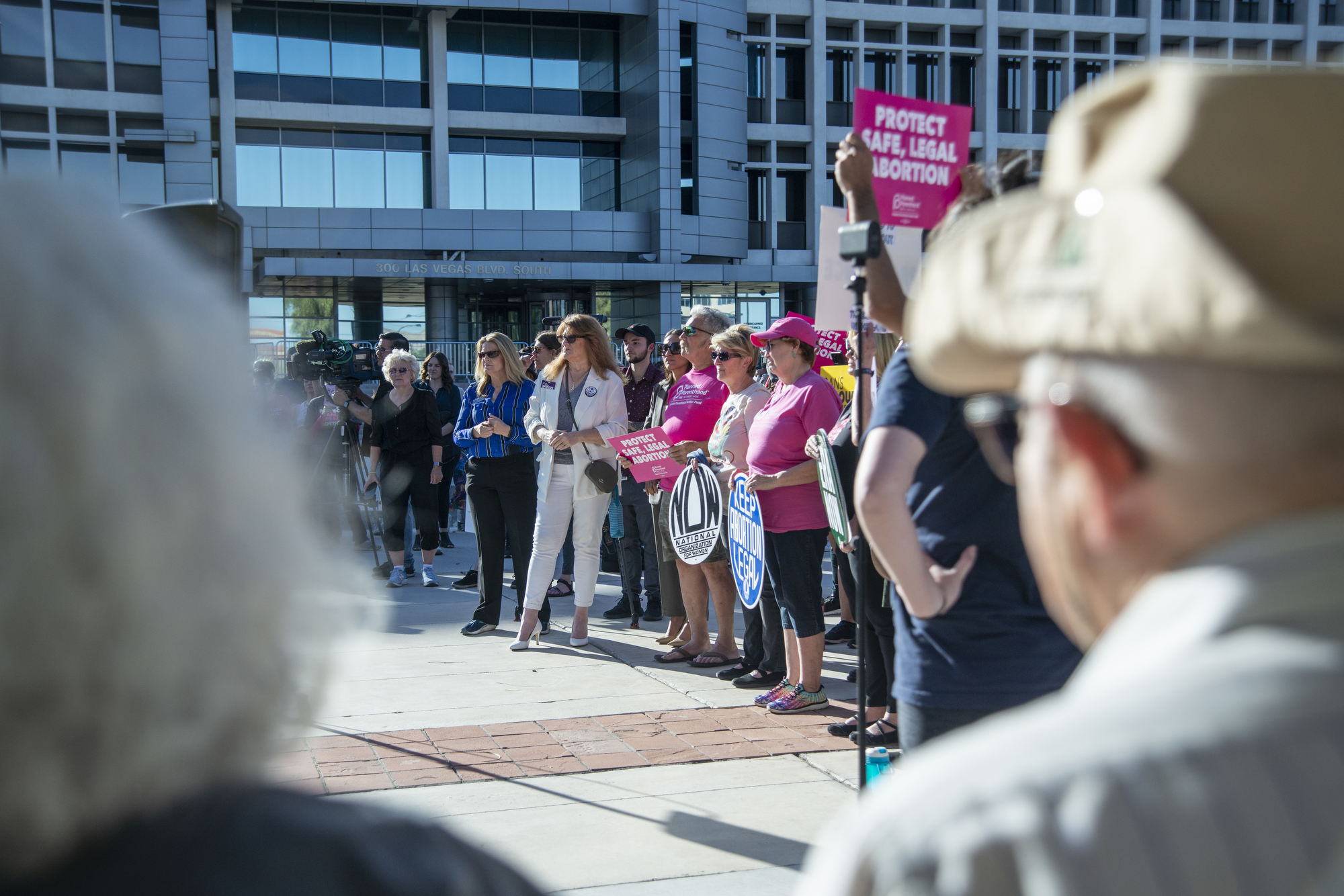 The expected overturn of federal abortion protections by the U.S. Supreme Court has launched the topic of abortion rights to the forefront of the 2022 election.

Though abortion rights in the Silver State have been protected by state law for more than 30 years and are unlikely to shift based on the Supreme Court decision, the outcome of the state’s congressional and Senate and gubernatorial elections will likely have implications for abortion protections at the federal level and contraceptive access.

To help readers discern where candidates fall on various issues of abortion access, The Nevada Independent sent out the following list of questions to candidates in the U.S. Senate, congressional and gubernatorial races:

Answers from each candidate are linked beneath their names. If a candidate did not respond to the questionnaire or provide a statement, it is noted. The Nevada Independent characterized some individual stances based on prior interviews, statements and news articles.

“Nevada's laws keep the government out of a woman’s decision to have an abortion. I support federal legislation protecting a woman's right to choose just as we have done in our state.”

Though Sam Brown did not respond to the questionnaire, he has proclaimed himself as a pro-life candidate, tweeting in May, “I am proudly pro life and await final SCOTUS ruling. This is the first time in history a draft opinion was leaked. One purpose: Intimidation. Free speech. 2A. Independent judiciary. Public education. There is no American foundation the left won't target for politicization.”

Laxalt also did not respond to the questionnaire but following the leak of the Supreme Court draft, he wrote that if the document reflected the Supreme Court’s final decision, “it would constitute a historic victory for the sanctity of life.” Laxalt condemned the leak, though, and noted that “no matter the Court’s ultimate decision on Roe, it is currently settled law in [Nevada].”

“Twenty six states are likely to ban abortion immediately if Roe v. Wade is overturned. I am proud to have been a part of the fight to ensure abortion access in Nevada with Question 7 in 1990, and I will continue to fight at the federal level to ensure that every woman has the right to body autonomy and choice over our own health care decisions. We need to protect every American woman’s right to choose and give them access to abortion regardless of where they live.”

For her full response to each question, click here.

“Regardless of where you stand on abortion, you should be very scared because the foundation of why we have the right to make a choice for our body and our autonomy is based on the right to privacy … We need to do whatever measures necessary, codified into law or pack the courts. We need to do something now to make sure that we are not allowing this to go through because again, it doesn't stop there.”

Serrano did not respond to the questionnaire but has posted this statement on her campaign website: “I believe in the sanctity of life, therefore I will fight to protect our children, born and unborn. Since Roe v Wade, sixty-three million babies have lost their lives in the womb. I will work to protect the unborn, for all human beings deserve the inalienable right to life.”

Brog did not respond to the questionnaire and does not have any information about abortion rights readily available on his campaign website.

“I support returning the question of abortion back to the States and to the people to decide. This was a Federal power grab that should never have happened. Even people who support abortion, like Ruth Bader Ginsburg, agreed that Roe had constitutional problems.”

“I have consistently voted to protect life and prevent the taxpayer funding of abortions through continuing to maintain the Hyde Amendment in all government funding bills, voting for the Defund Planned Parenthood Act, and even signing onto a discharge petition for the Born-Alive Abortion Survivors Protection Act. Further, I have consistently opposed the Democrat Party’s abortion-on-demand agenda by voting against every anti-life bill and amendment they have brought to the House floor.”

Tarkanian did not respond to the questionnaire, but he tweeted in May, “The Left will always fail at making moral arguments because they are immoral. The harder they try to justify killing unborn babies, the easier it becomes for the American people to see through their deceit.”

“I support all women across this country having access to safe, legal abortions if they choose to have one. I respect the voters of Nevada who protected reproductive rights in our state over two decades ago. I also trust that women making such decisions are making the best choice for themselves and their families at that time.”

For her full response to the questionnaire, click here.

“The unprecedented leaking of a U.S. Supreme Court opinion has done irreparable harm to our judicial system. While the final outcome is not decided, as a pro-life conservative and constitutionalist, I believe that states should decide abortion policy.”

“Once the Supreme Court acknowledges that Roe was incorrect, abortion will be an issue committed to the states. I am pro-life and support banning abortion in Nevada except in cases where the mother's life is at risk.”

“John believes that abortions should be curtailed, except in cases of rape, incest, or a threat to the mother's life/health, whereby he would like to see it limited to the first trimester unless on a case-by-case basis pursuant to the needs of the individual, circumstances would require an enlargement of the timeframe.”

Bossert did not respond to the questionnaire but has this statement on his website: “At conception, an unborn baby has unique DNA, and the baby will have its own heartbeat as early as 3 weeks. A moral society must provide and care for those among us that are unable to protect and defend themselves. The responsibility to stand in the gap and fight for the constitutional and God-given right to life is chief among our duties as Americans.”

“I believe that a woman’s decision to have an abortion is deeply personal, and she should be able to make that choice without government interference. I also support repealing the Hyde Amendment, which currently prevents women who are poor from accessing safe and legal abortion services.”

Though Black did not respond to the questionnaire, her campaign website includes this statement about the issue:

“It is our responsibility to protect all life – born and unborn. Planned Parenthood and abortion clinics across the U.S. should be cut off from government funding. We need to support centers that provide help to expectant mothers and reform our adoption systems so children can be put into homes that will love and care for them the way they deserve.”

Peters did not respond on to the questionnaire but described himself as “Pro-Life” on his campaign website:

“Why have we abandoned all personal responsibility when science has made it so much easier to avoid pregnancy?  Why have we signaled that an abortion is easier than birth control? … As a father, I understand the importance of protecting the unborn.  As a Congressman, I will fight to protect life, not devalue it.”

Bonaventura did not respond to the questionnaire and does not have any information about his stance on abortion rights on his campaign website.

“As long as I’m Governor, I will oppose any attempts - whether at the federal or state level - to attack a Nevada woman’s’ right to an abortion within 24 weeks of her pregnancy.”

“Senator Heller has said from the beginning of this campaign that he is pro-life and proud of it. As an example, he was asked recently if he would support a proposal allowing Nevadans to vote on banning abortions after 13 weeks except in cases of rape, incest, or threat to the mother's life. He said yes, he would support such a measure.”

Lombardo did not respond to the questionnaire. In response to the leak of the Supreme Court draft opinion, Lombardo told The Nevada Independent in an email, "Abortion policy is already addressed in Nevada law. The governor and legislature cannot make changes to it. The voters put it into law and only they can change it."

In May, Las Vegas Review-Journal conservative columnist Victor Joecks wrote that when asked, Lombardo said he would support sending voters a 13-week abortion ban ballot initiative, with exceptions for physical health, rape and incest. Reached for comment about more specific details, Lombardo’s campaign confirmed his answer and said he would support giving voters the “ultimate decision” on a 13-week abortion ban if it was brought forward by the Legislature or voters.

“If the voters and the Nevada Legislature sent a bill to the governor’s office, Joe has always said that he would view it through a pro-life lens,” Lombardo spokeswoman Elizabeth Ray said in an email to The Nevada Independent.

His campaign said he supports parental notification for minors but has not taken a position on spousal notification because it was ruled unconstitutional by a federal judge in 1981.

Gilbert did not respond to the questionnaire. His campaign website notes, “All life is a gift from God. I will fight to defend life and protect the unborn. I will oppose all pro-abortion legislation.”

This story was updated on Friday, August 8, 2022, at 10 a.m. to include information about Clark County Sheriff Joe Lombardo’s stance on abortions.