Overdoses among Hispanics spiked in 2020; advocates point to lack of services, stigma 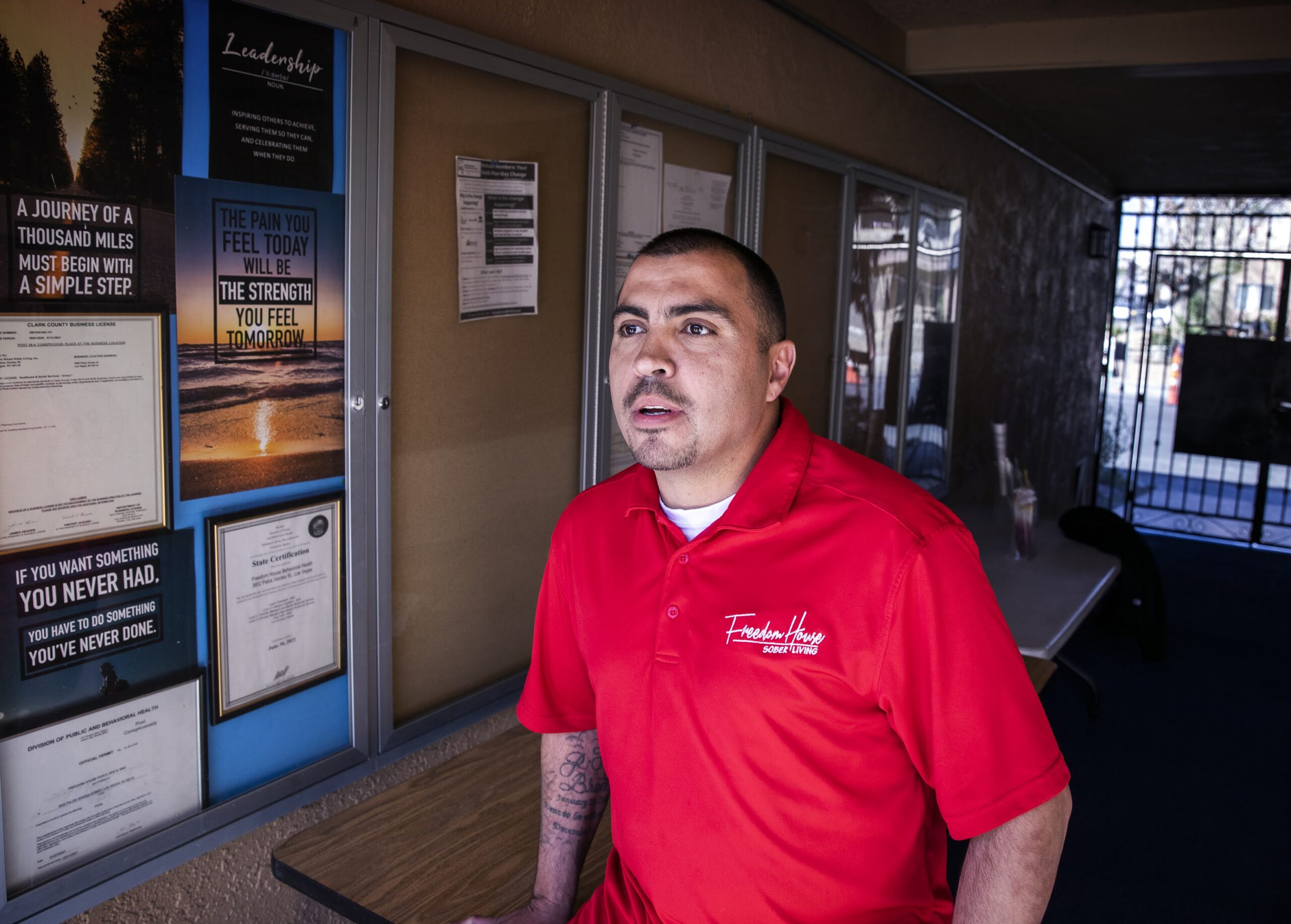 As the battle against COVID-19 took center stage over the last two years, another health crisis — drug-related overdoses — was worsening, particularly in the Hispanic community.

Overdose deaths among Hispanic residents in Nevada increased by 120 percent between 2019 and 2020, according to data released in October by the state Department of Health and Human Services. That surge is more than double the 55 percent increase in overdose deaths statewide during the same period.

Elyse Monroy, program manager for the Nevada Overdose Data to Action program (which oversees the surveillance of opioid overdoses in the state) said she was shocked to see the sharp increase in overdose deaths. Hispanic residents made up nearly 20 percent of Nevada’s recorded overdoses in 2020, up from 13 percent in 2019.

She said she was surprised because monthly non-fatal reports never showed “even a little tiny increase” in reported drug-related visits by Hispanic individuals to the emergency room in 2020.

A nationwide study on fatal drug overdose rates before and during the COVID-19 pandemic published in March shows that all racial and ethnic groups examined had increases in drug overdose mortality rates in 2020 compared to 2019. The increase was higher than any prior year between 1999 and 2019.

Though reported drug overdose rates among Hispanic or Latino individuals were lower than that of other demographic groups, the report indicated that Latinos saw a large increase (40.1 percent) in drug overdose rates in 2020 compared to the prior year.

The overdose mortality rate in Black individuals increased by nearly 50 percent, the largest percentage increase. The study also showed that American Indian or Alaska Native individuals experienced the highest rate of overdoses among the demographic groups.

Unintentional drug poisoning deaths, or overdoses, include cases where a drug or too much of a drug was taken accidentally, or the wrong drug was given or taken.

Advocates say there are several factors that may contribute to substance misuse in the Hispanic community, as someone who is grappling with substance misuse disorder may also be facing other challenges. Those could include stable housing, lack of trust in the health care system, and accessibility and availability of resources in Spanish with providers that not only listen but understand patients’ backgrounds — often referred to as cultural competency.

The sharp increase, however, has catalyzed conversations about external factors driving substance abuse-related problems within certain communities, including the Hispanic community. In January, the Nevada Office of Minority Health and Equity (NOMHE) held a virtual town hall meeting focused on opioid abuse in the state.

“Solely describing an addiction as a disease can be misleading,” Tina Dortch, program manager at NOMHE, said during the virtual meeting. “Merely doing that takes focus away from the forces of racism and other forms of oppression or discrimination that are so often bound up in addiction.”

Nevada is a federally designated health professional shortage area for almost all provider types, meaning there are too many patients and too few medical providers. As a result, residents face more hurdles finding providers, especially ones who accept Medicaid.

Across the board, from behavioral health, mental health, substance abuse counseling, and primary care providers such as dentists, Nevada does not have enough health care professionals to meet its needs, Monroy said.

That lack of resources, compounded by the fact that even fewer speak Spanish and are culturally competent, means many fear the rise of overdose deaths among the state’s Hispanic population could worsen without quick intervention.

Aaron Luna of the CARE Coalition, a nonprofit organization, explained during a community meeting on opioids in February that the deep-rooted ‘familismo’ — referring to the importance of family in Hispanic community — can both help and hurt someone experiencing addiction.

Family members can act as a support system, provide advice and encourage recovery. But sometimes prioritizing family can create pressure to not let down loved ones and result in ignoring one's health. Family members might have misconceptions and stigma surrounding drug use, Luna said. And for youth, family dynamics may prevent conversations about substance use and the effects of drugs.

“You might be more open-minded and realize ‘I have an issue’ … For older generations, say my parents or my grandparents, when we talk about substance abuse, they might say, ‘Why are you using that? That’s from the devil,’” Luna said. “Because they think it’s a moral fault that you're going through that issue. It’s not seen as a disease.”

Not talking about the risks of substance abuse can put children and teens more at risk, Luna said, adding that children with immigrant parents already experience immense pressure to make their family proud.

When Monroy looks back at her brother’s struggles with mental illness, she sees one of those family challenges: Her American mother wanted to get him medication, and her Mexican dad wanted to take a spiritual and holistic approach.

“We talk about, what does ensuring equitable access to care mean? It means culturally competent care,” Monroy said. “I think sometimes in public health we tend to over-medicalize issues and take out some of the more holistic routes of care.”

Others may not be able to afford to take time off or go to the doctor.

Jose Melendrez, executive director for the office of Community Partnerships in UNLV’s School of Public Health, said his father was a construction worker and even after suffering a heart attack, “the only time he could go see a doctor was if he had the cash in his pocket to go see a doctor.”

“We have so many Latinos that don't have the right kind of insurance. They might not have access to [health care],” Melendrez said. “And if they do, do we have enough Spanish-speaking, culturally competent professionals in those areas that can work with those communities? I would say my answer is no.”

Though Nevada’s rate of individuals without health insurance dramatically shrank after the state expanded Medicaid as part of the Affordable Care Act, Nevada’s population of uninsured individuals still ranks among the nation’s highest. According to the Kaiser Family Foundation, nearly 1 in 5 Hispanic residents in Nevada lacked insurance in 2020.

Sometimes substance abuse stems from injuries. Many of the jobs that Latinos take on require manual labor that could lead to injury. Prescription opioids meant for pain management, without information on the dangers of misusing the medications, can lead to abuse, Luna said.

George Petty hurt his back eight years ago while working as a bellman at the Excalibur Hotel and Casino. The Las Vegas resident was prescribed opioids for pain management and became addicted, from taking one or two pills to five or six a day, he said. Eventually, he was introduced to heroin and, in 2017, he became homeless.

After spending 45 days in county jail in early 2020, Petty realized he didn't want to keep living that lifestyle and subject his family to further pain.

A case manager with Shine a Light Foundation, a nonprofit focused on homeless outreach and placement services, referred him to the Las Vegas Metropolitan Police Department's Law Enforcement Intervention for Mental Health and Addiction (LIMA) program. LIMA’s goal is to divert individuals with a substance abuse disorder, or chemical dependency, away from the justice system to community-based services for treatment, detoxification, counseling and support.

Petty spent nine months in LIMA and graduated in January 2021 and is now working as a court liaison at Freedom House Sober Living, where he recovered. The facility offers life skills and job development classes, as well as classes about coping with anger.

“For recovering addicts, normal stuff people take for granted, we really had to work a long time to achieve,” Petty said. “To get back into society and get all these things done — it is a bit of an accomplishment.”

Paul Vautrinot, program director with Freedom House, said that they can accommodate clients that require services in Spanish and have bilingual therapists on staff, but the “demand” is not enough to warrant offering full classes in Spanish. He attributed cultural differences hindering addicts' openness to ask for help, but Freedom House won’t turn them away if they do seek services or support.

Advocates agree that education is the main way to address hesitancy to ask for help, with a focus on informing communities about the effects of substance abuse.

Education should include conversations with children and an overview of the resources available, including where to access and how to use Narcan (naloxone), an opioid overdose treatment that comes as a nasal spray, Melendrez said.

In 2015, former Gov. Brian Sandoval signed SB459, the Good Samaritan Drug Overdose Act, into law. It protects those who call for help in an overdose emergency from any legal ramifications and also expands access to naloxone.

The bill also allows the Department of Health and Human Services to award grants for educational programs or prevention efforts, including how to recognize and respond to opioid-related drug overdoses, and how to administer naloxone. The community-based organizations that provide those resources can also supply naloxone for free thanks to state funding, Monroy said.

The biggest barrier to getting naloxone to those in need is the expiration date, Monroy said. It has a shelf life of 18 to 24 months, and should not be kept in a vehicle because of heat sensitivity.

Although Hispanics are diverse in cultures and ideologies, one thing advocates agreed on was that schools and religious or faith-focused organizations serve as safe places, where people the Hispanic community trusts can bring up difficult conversations about substance abuse in a comprehensive approach.

“Faith-based communities, our Catholic churches, the priests, the Christian-based churches, the school districts, everybody needs to be on the same page with the same information so that we can get it out there,” Melendrez said. “Trying to go one by one, we're never gonna make it.”