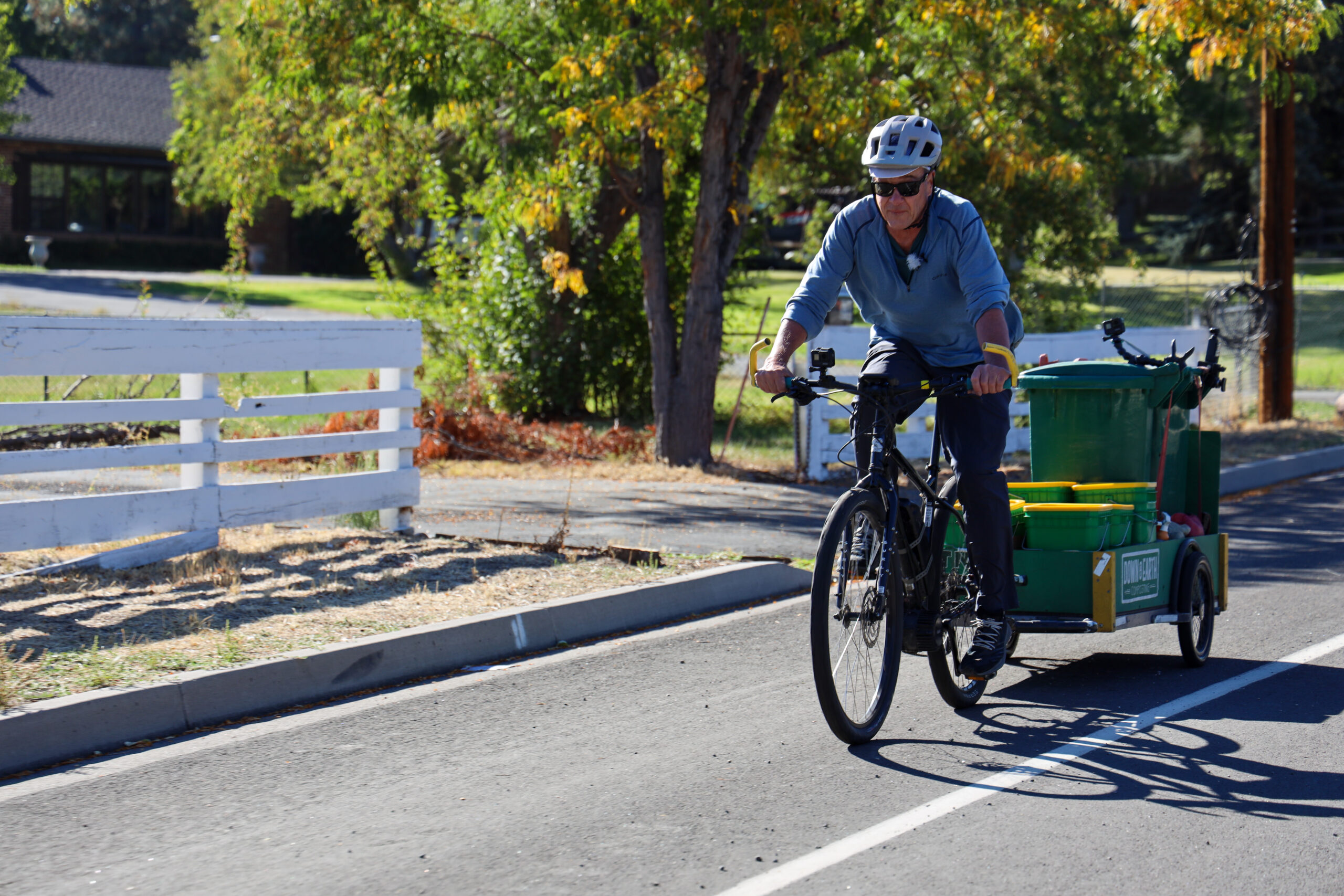 Mike Harrison works as a “rot rider” for Down to Earth Composting in Reno.

That means twice a week, he hitches a trailer to an e-bike and motors around town collecting compost. It might not be the fastest way to move large quantities of food waste around a city, but Harrison would not have it any other way.

“I do a lot of video work in my other jobs and that's part of why I like this so much, because it's the exact opposite. Instead of staring at a screen, I'm out in the world,” Harrison said. “Plus, we’re making good dirt.”

Harrison found Down to Earth the same way a lot of customers do — by noticing the bikes with large trailers riding around town. As a gardener, he was drawn to the mission of promoting composting, and loved the idea of using bicycles.

“I think all of us are going to see more and more e-bikes pulling trailers, hauling a variety of things because it's cost efficient. I think for the operator, it's a world of difference,” Harrison said.

The explosion of e-bike technology for commuters has prompted large delivery and logistics companies to look at how the two-wheeled vehicles can help solve the so-called last-mile problem. Often, more than half the cost of a delivery comes from the final mile, the most time-consuming and inefficient part of the process.

A big part of that cost is fuel, something Down to Earth minimizes by doing as much collection as it can on bikes. But the unique bike trailers emblazoned with company logos also serve as advertising.

“On a snow day last December, I had a couple pull in front of me,” Harrison said. “And they jumped out of their truck and they're like, ‘We started using you because we saw you riding on a snow day.’”

Members who sign up for at-home collection get their compostable material taken away once a week. In return, they’ll receive compost twice a year — up to 40 gallons total. Harrison said home gardeners especially like this, because it can be difficult to compost successfully in Nevada.

The biggest composting barrier: Nevada’s dry climate. The microorganisms that drive the composting process need a certain amount of water to survive. Oz Kupoglu, CEO of Down to Earth Composting, recommends looking for guides tailored to your climate if you want to try composting at home.

“In Las Vegas, even if you water your compost pile once a week, that might not be enough,” Kupoglu said. “Those little worms need that moist environment so they can come in and do their jobs.”

Kupoglu started as a rot rider, but she took the reins as the company’s chief executive two years ago just as the pandemic was forcing many restaurants to close or transition to a delivery model.

“We were actually one of the luckier businesses,” she said. “We grew a ton because of people cooking at home and wanting to reuse their food scraps rather than just throw them away.”

According to the Environmental Protection Agency, composting provides a number of ecological benefits. First, it produces less methane, a potent greenhouse gas, than sending organic waste to landfills. Second, it can reduce reliance on chemical fertilizers, which are being threatened by the war in Ukraine.

Kupoglu said what she likes about the Down to Earth story is that it started out as a small dream for a couple of people that has blossomed into something much larger.

“It's really intimidating trying to save the world as one person,” she said. “Five years down the line, we have 750 members now and we collect commercially from certain restaurants as well. So you can make a huge difference.”

It is in that spirit, on a brisk October morning, Harrison lugged the first green bucket of food scraps to his trailer, hopped on the e-bike and pedaled the hilly streets of Northwest Reno to his next pickup.

One stop down, many more to go.