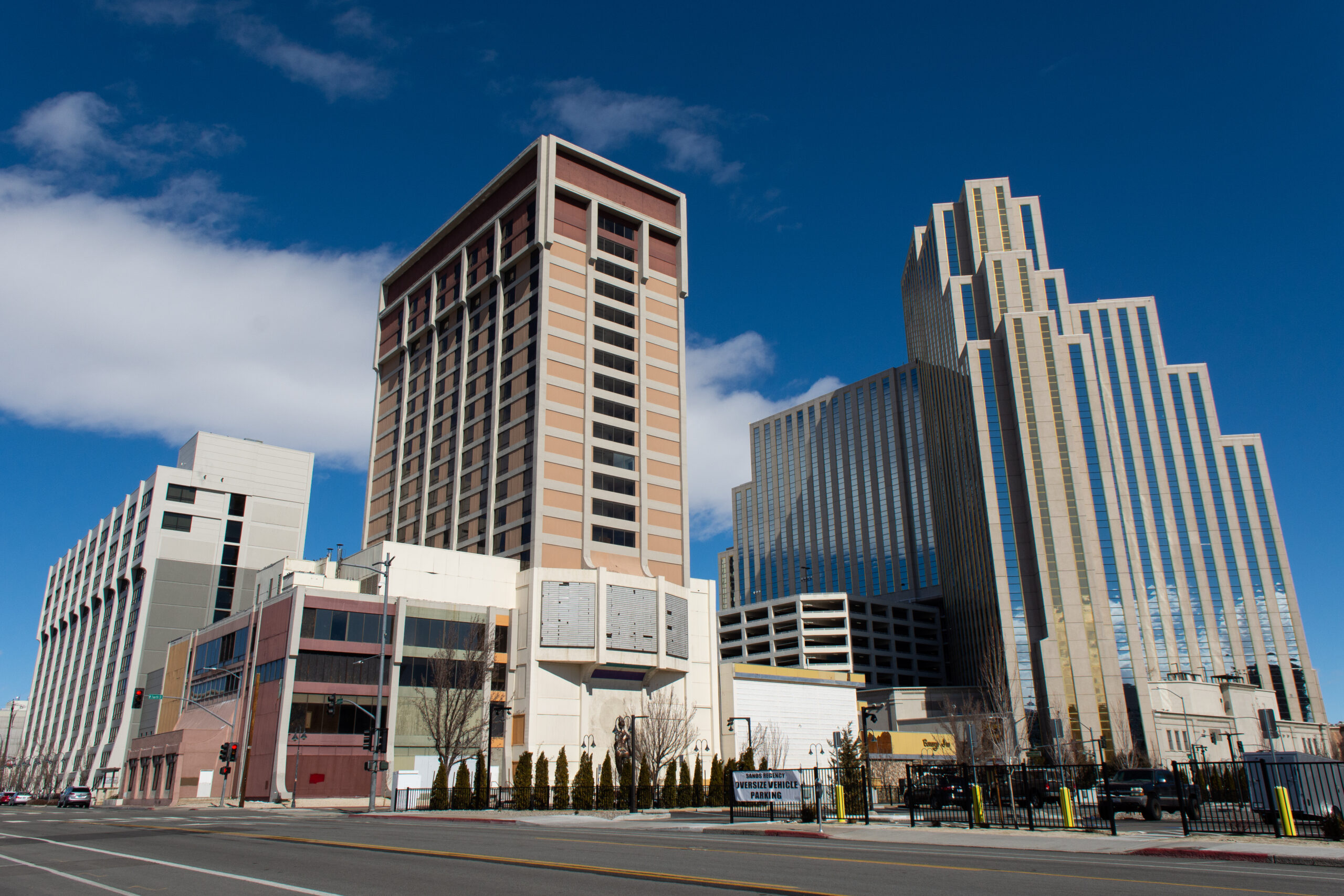 Amid growing unease about skyrocketing rental and home prices, Reno’s city council held a special meeting Tuesday to discuss solutions that may alleviate pressure on the market and increase affordable housing.

Marci Camp is one of the city’s residents experiencing the crisis firsthand. Standing before the council during public comment, she described how she and her neighbors are facing a more than 36 percent rent increase. She does not know where else they can go.

“My income is not negotiable,” she said. “Many of us are disabled and seniors … we’re not sleeping, we’re in fear, we’re in anger and our family of neighbors is being disbanded.”

The seemingly unrelenting price hikes have made it difficult for most families to afford rent or mortgages, Mayor Hillary Schieve told The Nevada Independent during an interview Sunday. At the meeting, Tuesday, she and other staff and council members reviewed the city’s growth trajectory and discussed ongoing efforts to curb housing costs and other steps the city could take.

“There’s no one-size-fits-all solution,” Schieve said. “We’ve got to do whatever we possibly can.”

The city’s options are limited by the scope and authority of local government, though, meaning the city doesn't have explicit permission to implement policies such as a rent control law.

But Schieve said the council could increase housing options and work with state and county leaders to address housing insecurity by combining resources with other jurisdictions and offering supportive services such as helping residents access housing subsidies and providing mental health services.

During the meeting, Councilman Devon Reese also brought up the idea of exploring universal basic income, or a fixed-dollar allowance for residents, to help address the housing crisis. Municipal leaders in Stockton, California launched a similar program in 2019.

“We have to be willing to fail,” Reese said. “I'm trying to find what are the innovative approaches communities are doing and perhaps one of them is a universal basic income.”

Councilwoman Naomi Duerr said she’s seen larger corporations with a portfolio of apartments spread across multiple states generating rent increases without cause, and said she would like to look into how to incentivize landlords not to raise rents unnecessarily on tenants.

One way to drive down housing costs is to increase the amount of housing stock, as part of a supply-and-demand equation, Schieve said on Sunday. Through programs such as the city’s “1,000 Homes in 120 Days,” which offer developers local permit fee deferrals that act as no-interest “loans” to attract more construction, the city could boost inventory, eventually lowering demand and prices.

Additionally, the mayor said she and her staff are looking at increasing the amount of mixed-family zoned developments and allowing for homeowners to build separate living units on a property, such as a mother-in-law apartment. Her remarks arrive in the wake of ProPublica reporting highlighting the lack of replacement for city-approved demolitions of weekly motels, which are one of the few affordable housing options in the area for residents on fixed incomes.

Various state officials and other community leaders were on hand for the special meeting, including State Treasurer Zach Conine, who noted that through a partnership with the AFL-CIO Housing Investment Trust and the Building and Construction Trades of Northern Nevada, the state is working to develop a pipeline of affordable housing projects in Washoe County and across the state.

Because the city has limited resources and Washoe County has primary responsibility for Northern Nevada’s homeless services, Schieve said this is a team effort and she is looking to other jurisdictions for assistance.

“We will build it, but then [the county has] got to bring the supportive services,” she said. “That is what they do, but we all have to be doing it together.”

The city plans to host meetings focused on affordable housing every three weeks, Schieve said. She hopes the meetings encourage more community input and participation as the city confronts the housing challenges.

But Schieve said it’s not as easy as simply building new homes or apartments.

Affordable housing units built under the federal Low-Income Housing Tax Credit program receive federal tax subsidies that partially offset construction costs. Federal law sets a limit on the income level of tenants and the amount of rent that landlords can charge them.

Property owners are required to maintain affordability (as defined by the terms of a tax credit agreement) for a timeframe of 15 to 30 years. At that point, owners can either renew the affordability status or drop it and rent or sell their property at the market rate.

During the 2021 legislative session, lawmakers passed SB12, a law requiring property owners with affordability restrictions that are subsidized and under the oversight of the Nevada Housing Division to notify local governments and tenants a full year before they intend to let restrictions expire.

State lawmakers said this would give local governments time to react to affordable-designated units coming off the market. Still, with market rates as high as they are, Schieve said there’s a minimal incentive for owners to keep the housing affordable.

About 6.2 percent of Reno’s housing units are designated as affordable housing for low-income earners, Reno’s Neighborhood Development Division Manager Monica Cochran said during the meeting. She said the city is working on seeing what it can do to encourage developers or property owners to keep housing from going back to market rate, including offering funding to rehabilitate and maintain buildings.

Additional funding on the horizon

Along with a discussion on land use and zoning, the council weighed in on how to best spend the city’s share of federal American Rescue Plan Act (ARPA) funding for affordable housing projects. Council members voted in January to set aside more than 50 percent of the nearly $25 million the city received in ARPA funds for affordable housing.

On Tuesday, council members directed staff to allocate $2.5 million of the ARPA funding toward a proposed expansion of Sage Street dormitory housing and $2 million toward the purchase and renovation of a 35-unit highway motel that could be used to house senior citizens and veterans, pending terms of ownership and operations.

Though the state’s housing division could not commit an exact dollar amount to the two projects because it is still waiting to hear how much it is set to receive through state ARPA funding, Administrator Steve Aichroth said the division is excited about contributing funding to the two projects.

During the pandemic, the city received funding from the federal CARES Act that allowed it to set aside resources to help people pay rental deposit fees and create crisis relocation vouchers. The influx of funding also allowed Reno to help construct the Nevada Cares Campus, a 46,000-square-foot shelter.

Schieve said the ARPA funding would enable the city to develop workforce, transitional and other affordable housing beyond what was allowed under the CARES Act.

“We never had the financial ability to do anything and now with this federal funding, we are finally now going, ‘Wow, we can take this money and we can really build housing,’” she said. “We’ve always had to rely on private development. So you always have to do a private and public partnership.”

The Reno Gazette Journal reported that the Reno Housing Authority is considering purchasing the former Sundowner Casino Hotel and Bonanza Inn as part of a 1,000-unit project focused on workforce housing (housing that is affordable to workers and near their jobs) backed by Schieve and developer Jacobs Entertainment. Though the housing authority has submitted an offer to buy the inn and a letter of intent to make an offer on the Sundowner and Bonanza Inn, the bids are not public. Schieve said nothing has been finalized yet.

“I would love to see that be workforce housing right downtown,” she said. “A lot of service workers downtown [make] very little wages and these are people that would never be able to qualify for a mortgage, but then they don’t qualify for financial assistance because they make too much.”

Though the housing authority requested $13 million from the city’s allocation of ARPA funds to help it purchase the two properties, council members did not take action on the request and instead called for a future special meeting to consider a more detailed request.

Even with the additional ARPA funds, Schieve warned that it takes time to bring housing projects to life.

Construction timelines could be hampered by pandemic-related supply shortages, a problem that can’t be solved even with the additional federal funding.

“We’ve got to explore every option because people need it. And they need us now more than ever,” she said. “We’ve never seen this financial ability to do it … and we have to keep trying.”