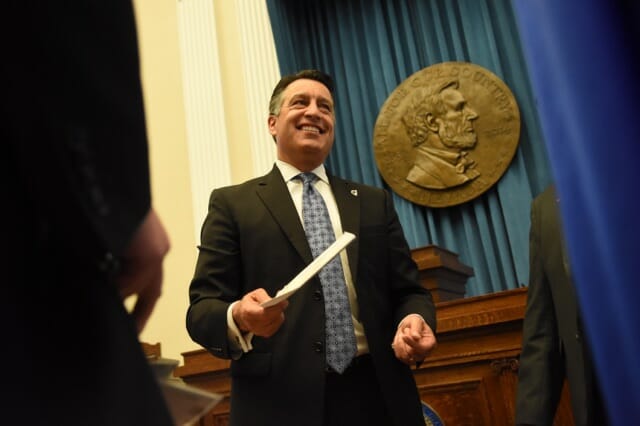 Nevada Gov. Brian Sandoval has no immediate plans to send state National Guard members to the U.S.-Mexico border, saying he did not think the proposed plan was “appropriate.”

A spokeswoman for Sandoval said Thursday that the Republican governor had not been contacted by the federal government since the administration announced earlier this week that it would deploy several thousand National Guard troops to the border and that he would only consider doing so under specific circumstances.

“In the past, the Nevada Army National Guard has participated in Border (Patrol) missions, which amounted to both surveillance and life-saving mission sets in the performance of their border duties,” Sandoval spokeswoman Mary-Sarah Kinner wrote in an email. “If a proposal that was consistent with life-saving missions was necessary and/or requested, the Governor would consider such a request.”

The Trump Administration formally announced the planned deployment on Wednesday, but said many of the details still needed to be worked out with border-state governors — a necessity given that National Guard personnel report to state governors.

Democratic Rep. Dina Titus urged Sandoval to refuse any request by the administration to use the state National Guard for border patrol, citing increases in spending for border patrol agents and calling it “premature and unnecessary, and will further damage our relationship with Mexico.”

Sandoval made similar comments last year after the leak of an internal Department of Homeland Security memo calling for up to 100,000 National Guard troops be used in immigration enforcement, and included Nevada among the 11 states where they would be deployed.

“After reviewing early media reports, the Governor said this morning that he didn’t think this would be an appropriate use of the Nevada National Guard and questioned its legality,” Sandoval’s former spokeswoman Mari St. Martin said in a February 2017 statement.

Federal law prohibits active-duty service members from engaging in law enforcement inside the U.S., unless given permission by Congress. Homeland Security Secretary Kirstjen Nielsen did not give details Wednesday as to the number of requested troops and how much the operation would cost, but said it would be similar to deployments used by former Presidents George W. Bush and Barack Obama during their tenures.

An unnamed administration official told The Washington Post that the National Guard troops stationed on the border would perform support roles including road development and intelligence gathering.

Arizona Gov. Doug Ducey, New Mexico Gov. Susana Martinez and Texas Gov. Greg Abbott, all Republicans, said in statements that they favored the deployments, while Democratic Oregon Gov. Kate Brown said she would turn down any request to send Guard troops to the border. A spokesperson for Democratic California Gov. Jerry Brown said the announcement would be “promptly reviewed.”

Although not a border state, Nevada has an estimated 210,000 unauthorized immigrants living in the state, good for nearly 7.2 percent of the state’s population.

The administration’s announcement comes as the number of illegal border crossings are at their lowest level since 1971, though the number of people arrested for illegally crossing jumped by 37 percent between March and February 2018.