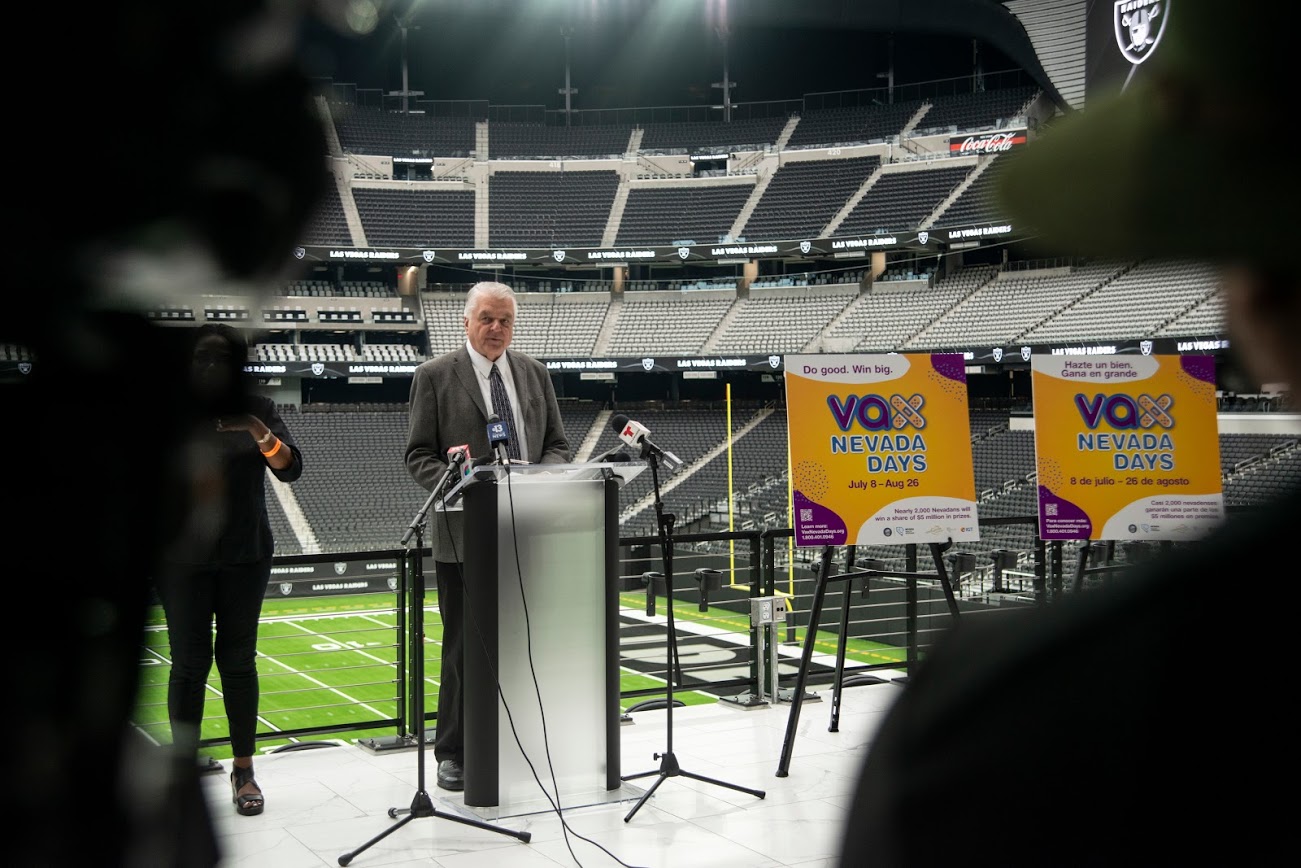 Gov. Steve Sisolak announced on Thursday a new state-run incentive program that will award some $5 million in prizes —  including a $1 million grand prize — to Nevada residents who get the COVID-19 vaccine.

“We want to avoid ever going through what we went through COVID last year,” Sisolak said. “That's why today I want to provide Nevadans with an exciting update on one more way we're planning to encourage all Nevadans to get their vaccine, in addition to thanking those who've already gotten their shots.”

Sisolak unveiled the program at a kickoff press conference at Allegiant Stadium, where a vaccine clinic and stadium tours were simultaneously being held. Though winners will be announced each Thursday from July 8-Aug. 26, those who have already been vaccinated will be automatically entered in the drawings once their vaccinator has submitted that information to the state.

Every Nevadan who is at least 12 years old and receives at least a first dose will be automatically entered to win one of nearly 2,000 prizes.

People of all ages are eligible to win one of 500 Nevada state park annual passes or one of 1,250 state fishing licenses.

All $5 million worth of prizes will come from federal COVID-19 relief funds, and they will be distributed through Immunize Nevada. Sisolak said he expects winners to first be called as prizes are drawn, though the administration of the program will be fully carried out by Immunize Nevada.

Sisolak was also joined at the event by Scott Gunn, a senior vice president at the gaming company IGT Global Solutions Corporation. Gunn explained that other states are able to administer COVID-19 incentives through their state lotteries. Because Nevada does not have a state lottery, IGT will be helping pick winners through a certified random number generator, which is the process used by lotteries in other states. Gunn also noted that IGT will not have access to anyone’s personally identifiable information throughout the process.

Sisolak explained that the drawings are legal in the state because Nevadans are being entered into a raffle system rather than a lottery that someone would have to pay to enter.

Over the past few weeks, a variety of other states have announced incentives meant to boost vaccination rates, after the number of doses being administered daily across the country significantly declined in late April and May. Some states have announced cash prizes, such as Ohio, which started the “Vax-a-Million” campaign to boost vaccination numbers by giving out five $1 million prizes to vaccinated adults.

Other states have offered different, non-cash prizes, such as free tickets to a Six Flags theme park, which Illinois offered to some of its vaccinated residents.

Update: This story was updated at 5:30 p.m. on June 17, 2021 to include more information about the incentive program.