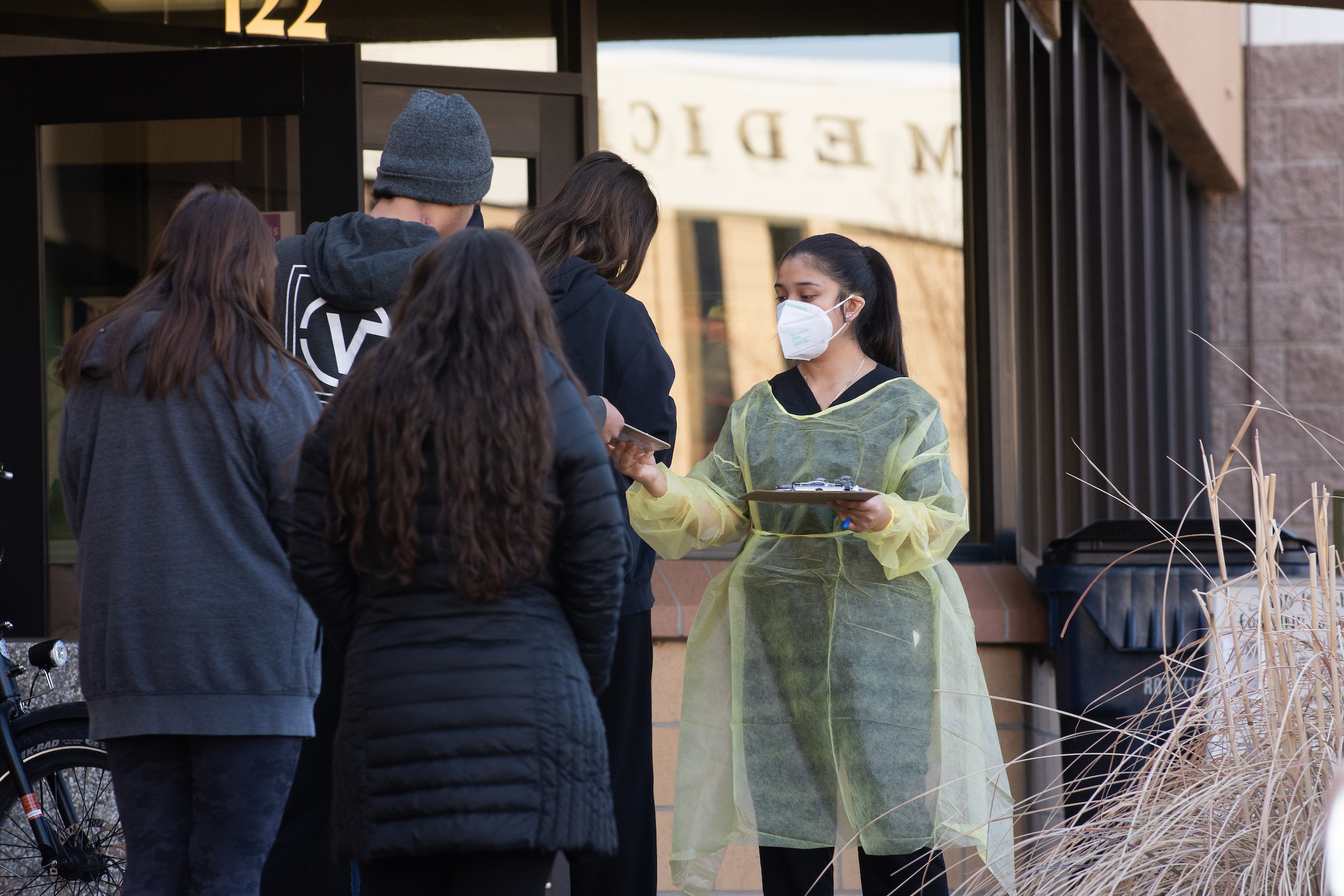 Gov. Steve Sisolak’s office on Wednesday criticized the actions of a politically connected COVID testing contractor that expanded in Nevada without proper licensing and yielded widely inaccurate test results, calling the company’s actions “despicable” and “fraudulent” and saying they are cooperating with a federal investigation.

The comments come in light of a ProPublica story co-published Monday with The Nevada Independent. Sisolak’s administration is under fire for its actions in approving Northshore Clinical Labs to conduct testing last year, but his office argued that it opened an investigation and took action to suspend the company’s PCR testing and correct deficiencies the first day it was made aware of the issues.

"The company's negligence is despicable," a spokesperson for the governor's office said in a statement, adding that the state is assessing its legal options. "They took advantage of states and local municipalities at a time when millions of Americans were relying on their services.”

A Tuesday email to the state, obtained by The Nevada Independent, indicates the Department of Health and Human Services' Office of the Inspector General plans to subpoena documents about Northshore's Nevada operations for its ongoing case.

Meanwhile, Washoe County School District spokesperson Victoria Campbell said the district is "troubled" and surprised by many of the findings in the ProPublica investigation, saying many of the details revealed were new to them. Like many of the public agencies that worked with Northshore and were contacted by The Indy following the publication of the story, the school district indicated that it had trusted other government agencies to vet the company.

“The school district does not employ epidemiologists and relied on its partnerships with the local health district and the state for this sort of guidance,” Campbell said. “The school district was informed by the Washoe County Health District that Northshore was a viable contractor, and the state Department of Health and Human Services was also aware of this contractor and our intent to use their services.”

ProPublica’s investigation found that even though red flags were raised by scientists at the ​​Nevada State Public Health Lab, government managers in Nevada ignored their warnings and expanded the lab’s testing to the public late last year. Public health officials at UNR ultimately found that the company’s PCR tests missed 96 percent of the positive cases in a university setting.

Kent Ervin, chemistry professor at UNR and state president of the Nevada Faculty Alliance, said the university suspected problems with Northshore’s PCR test results in November and December and had confirmed the problem by early January. But the students and faculty were never informed that they may have received false-negative results.

University President Brian Sandoval’s email announcement to the campus in February stated that UNR was terminating its contract with the company because of the institution’s dissatisfaction with its service. The announcement did not mention the testing problems.

Having relied on a negative PCR test from Northshore before visiting his family for Thanksgiving, Ervin said UNR and the Nevada System of Higher Education should have been transparent.

“I’m outraged that a worthless test could have put my family members in harm’s way,” Ervin said. “We are owed an apology.”

Scott Walquist, director of communications at UNR, responded to a request for comment and underscored the role of UNR staff in helping identify there were discrepancies in the testing. Sandoval did not respond to requests for comment this week regarding the ProPublica story.

The Republican Governors Association (RGA) has seized on the situation, arguing the story clearly shows the Sisolak administration pressured its licensing bureau to rush approval for the COVID testing company, causing more cases and deaths. A spokesperson for Sisolak’s likely general election opponent, Clark County Sheriff Joe Lombardo, criticized the governor on Tuesday and said he “owes Nevadans accountability and transparency, so that the thousands of families affected by his administration’s negligence can finally get some answers.”

To date, neither state nor county health officials have alerted individuals who received COVID tests from Northshore that they may have been given inaccurate results nor shared plans to remedy the issue, although the governor’s office said the state will use lessons learned from across the pandemic to make investments and strengthen Nevada’s public health systems moving forward. None of the municipalities that contracted with Northshore said, when asked, whether they plan to apologize or notify the public directly.

A spokesperson for the federal Health Resources and Services Administration said although the agency does not generally comment on specific cases, the agency does take corrective action against providers who are out of compliance with the terms and conditions of the Uninsured Program, including working with law enforcement when appropriate.

Northshore, based in Chicago, began a dramatic national expansion last year. In contracts with brothers Greg and Angelo Palivos, the company started to build clientele and manage operations in Nevada. Their father, Peter Palivos, regularly contributed to Nevada political campaigns in the past and met often with Sisolak in the early days of the governor’s administration.

When licensing for a Northshore testing facility in Henderson was projected to take longer than anticipated, the Palivoses asked Mike Willden, a former director of the Nevada Department of Health and Human Services (DHHS) who now works for The Perkins Company lobbying firm, to get the process expedited. Willden told ProPublica he thought the company could help address a dearth of testing capacity in Nevada.

In an interview with The Nevada Independent on Tuesday, Willden said he received many inquiries and complaints about COVID testing because of his past involvement with DHHS. When the Palivos brothers contacted him in August, Willden said he put them in contact with inspector Bradley Waples, who then begrudgingly let Northshore skip the waiting line according to emails first reported in the ProPublica investigation.

“They contacted me since they thought I was knowledgeable with the processes and asked for help and I reached out on their behalf and put them in touch with various players in the state to help them get licensed,” Willden said. “I had no detail. I have no information about Northshore’s testing policies, procedures, and I didn’t ask for it and they didn’t offer it.”

Willden said he has met the Palivos brothers but only had phone calls with Peter Palivos about a program that never got off the ground a couple of years ago. He added that although the Palivos brothers offered him monetary compensation, he refused and only accepted a Christmas gift, a tin of caramel popcorn and four steaks, as a token of appreciation.

Richard Perkins, the former Democratic speaker of the Assembly and president and chief lobbyist for The Perkins Company, said he has never spoken to the Palivos brothers and was not involved in any way.

The governor's office said Willden, a “former DHHS director with a long standing reputation in state government, vouched for the company,” and that the state’s licensing bureau followed necessary procedures to approve Northshore's license. Given the company's extensive contracts, national footprint and representation that it was under contract with the city of Henderson and needed to meet an Oct. 12 start date, the inspection appointment was expedited by seven days, Sisolak’s office said.

After Willden’s introduction, Sisolak’s chief of staff, Yvanna Cancela, contacted the director of the state’s pandemic response, who urged the head of the state’s licensing bureau, Cody Phinney, to move up its inspection of Northshore Nevada headquarters in Las Vegas. A spokeswoman for Sisolak said Cancela did not talk to Palivos about Northshore.

Palivos donated $25,000 to Sisolak in the past five years and made contributions to many prominent Democratic campaigns including Ford, Assemblywoman Shannon Bilbray-Axelrod and Henderson Mayor Debra Anne March. He also contributed to Justice Lidia Stiglich, who won a nonpartisan seat on the Nevada Supreme Court.

But Sisolak’s office says the governor did not have any conversations with Palivos about Northshore clinical operations.

A spokesman for Ford told The Indy his office did not make decisions regarding the business of the office such as investigations based on politics, including campaign donations.

The governor’s office said the state’s COVID-19 response coordinator worked with Northshore Clinical Labs to start a testing program with the City of Henderson to ensure services would remain uninterrupted and to connect Nevadans to testing during a time of great need.

In response, a spokesperson for the City of Henderson told The Indy the state was likely unaware of the extent of the city’s involvement with the company. According to city spokeswoman Kathleen Richards, the city did not have any kind of partnership or contractual agreement to provide COVID testing services with Northshore Clinical Laboratories.

Richards said Northshore Clinical Labs obtained a Henderson business license after it was licensed by the state Department of Health and Human Services. The company followed the same business licensing requirements for any entity operating a business in Henderson’s jurisdiction, and it operated its testing facility in the parking lot of Whitney Ranch Recreation Center under a standard facility use agreement and without any involvement from the city.

Palivos has frequently introduced March at events, and he and his wife have contributed $7,500 to her since last year.

Other local municipalities contacted by The Nevada Independent responded with similar statements that their agencies were under the stress of the pandemic and trusted the state’s confirmation of the company’s credentials.

The spokesperson for the city of Las Vegas said while the city did contract with Northshore Clinical Labs for testing in multiple locations, it was for a short time to provide limited COVID-19 testing when demand for testing was at its highest levels.

“The city has not entered into any other contracts with Northshore Clinical Labs, and is no longer affiliated with the company,” said Jace Radke, senior public information officer of the City of Las Vegas.

Campbell, with the Washoe County School District, said the district’s testing program was in response to the emergency directive from the governor. In compliance with the directive, the school district relied on antigen testing and said it was not aware of the company’s high error rate.

Northshore set up four testing locations in Washoe County after an agreement was signed in December. According to the county’s spokesperson, when all four locations were operational, the company was able to conduct 1,600 tests per day.

While the total number of tests administered in the county is unknown because the company was not obligated to report those numbers (the county wasn’t paying for the tests nor running the testing sites for them), county officials said the company only carried out antigen tests under its jurisdiction.

“What we knew at the time was that Northshore Labs was licensed by the state to conduct COVID-19 testing and was already doing so for the school district and UNR,” Bethany Drysdale, media and communications manager at Washoe County, said in an email. “They ramped up to accommodate our community-testing needs but discontinued PCR testing when it proved to be unreliable.”

Scott Oxarart, communications manager for the Washoe County Health District (WCHD), said the health district “did not have anything to do with the testing operation” other than holding a meeting with Northshore to ensure they were licensed to test in Nevada and that its results were reported correctly.

“The meeting with WCHD and Northshore was to see what they were offering as a testing lab,” Oxarart said in an email. “We received confirmation from the state that they were reporting correctly and that they were licensed prior.”

Editor’s note: If you had direct experience with Northshore Labs or have any information about matters described in this story, please fill out this short contact form.