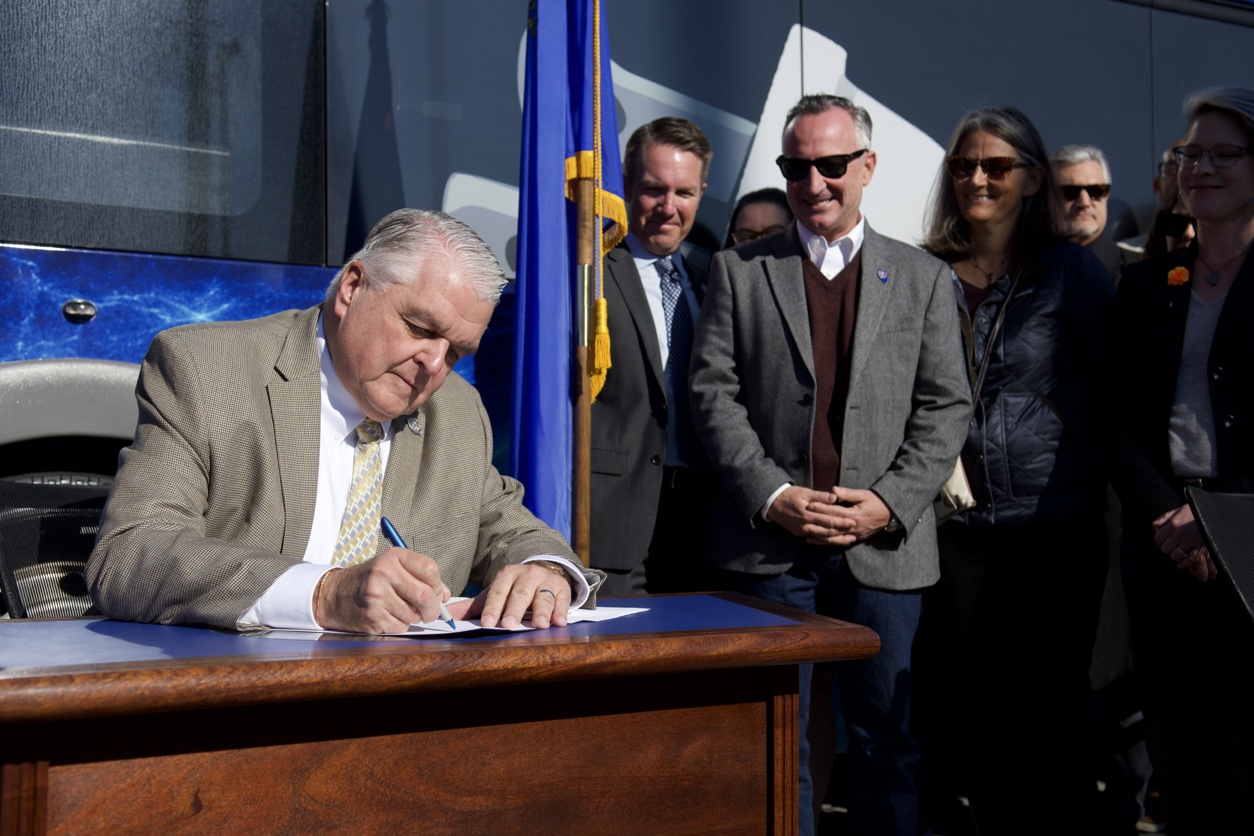 Through an executive order Friday, Gov. Steve Sisolak directed his administration to develop a coordinated plan to address climate change, saying during a speech in downtown Reno that it builds on “substantial progress” his administration and the Legislature made in less than a year.

The announcement marks a significant shift for an executive branch that was early to embrace renewable energy, but until recently had shied away from making explicit policy statements on an issue that scientists say is playing a role in rising temperatures, more extreme wildfires and increased variability of mountain snowpack, the source of drinking water for most Nevadans.

“We are here to acknowledge that our fight is far from over,” Sisolak said in front of an electric bus at the Reno Transportation Commission of Washoe County. “In order to protect Nevada and reach our goals, we must continue to take steps to address this serious issue.”

Sisolak said the state will start moving to stronger emission standards. He said the state needs to turn its attention “to transportation, the largest source of carbon pollution in our state.”

The governor did not elaborate on how the state planned to toughen emission standards. David Bobzien, who heads the Governor’s Office of Energy, said his office plans to study the issue.

“The administration has a lot of research to do [to] really look at the various models that are out there and try to find the one that is most applicable to our specific situation in Nevada,” he said.

Sisolak’s directive instructs state agencies on how to implement SB254, legislation requiring the state publish an annual emissions report. The legislation, signed by the governor in June, asks the state to examine the reductions necessary to meet specific carbon reduction benchmarks.

The executive order directs the administration to complete a report that inventories the state’s greenhouse gas emissions and includes policy options to reduce emissions. From there, it charges the state with developing a climate strategy with specific budget recommendations.

Echoing these goals, the executive order aims to cut greenhouse gas emissions to 28 percent of what they were in 2005 levels by 2025. By 2030, the state’s goal is to bring emissions to 46 percent below 2005 levels. Those benchmarks are in keeping with commitments from the U.S. Climate Alliance, a coalition of states that are seeking to follow the Paris Agreement.

The report, according to SB254, requires the state to examine whether its policies “support long-term reductions of greenhouse gas emissions to zero or near-zero by 2050.”

At the event Friday, Democratic Sen. Chris Brooks said that the efforts marked a shift for the state.

“Just one year ago, we could not even discuss the climate crisis or the reduction of carbon in the Nevada Legislature or in our state government,” he said. “And look how far we’ve come.”

The state’s efforts will be coordinated by the Department of Conservation and Natural Resources and the Governor’s Office of Energy, but the executive order explicitly calls for collaboration with tribes, local governments, state agencies, the Nevada System of Higher Education and federal agencies. It also requires that the administration consider how the policies will affect low-income communities, often the most at-risk from climate change.

“Communities of color, especially low-income families, are hit hardest and the worst by the effects of climate change,” Alexa Aispuro, a community organizer with Chispa Nevada, said at the event. “We’re more likely to live in neighborhoods with dirty air or near sources of pollution.”

Policies, according to the executive order, could include “economy-wide” or “sector-specific programs” that include “market-based mechanisms.” Other policies that it suggests are building codes, transportation electrification and “tools and technologies to enhance climate resiliency.”

In addition to focusing on the reduction of emissions across the economy, the executive order also asks state agencies to consider their energy use and conduct a climate risk assessment.

Before laying out administrative directives, the executive order acknowledges the challenges that climate change poses for Nevada’s environment and its economy. Between 1970 and 2018, it states, temperatures in Las Vegas have increased by more than five degrees, a threat to public health. And climate change, the executive order notes, poses a risk to outdoor recreation.

It also ties climate change to attracting businesses to the state. Some companies are pushing to reduce their carbon footprint and incorporating climate change into their own risk assessments.