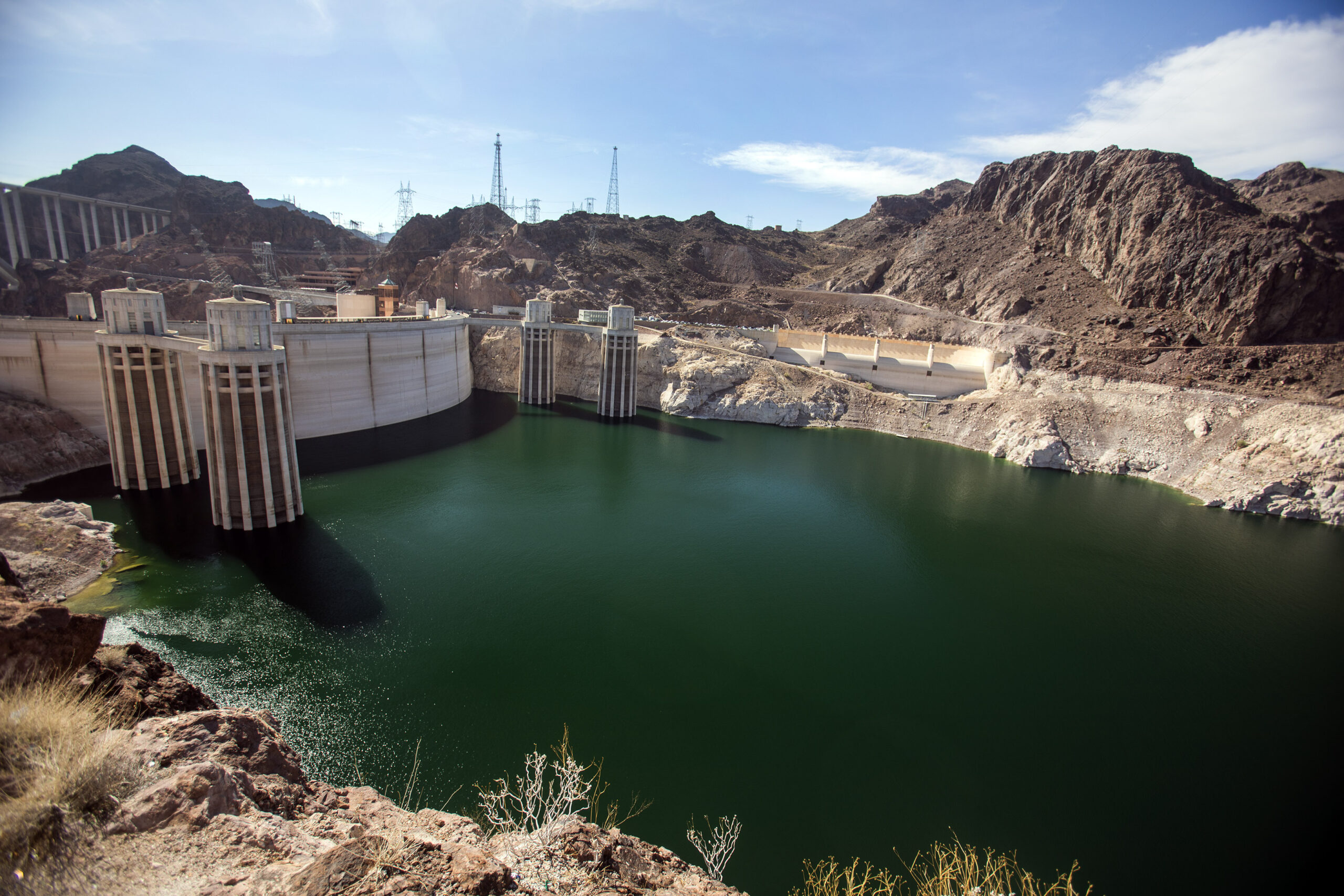 After more than three years of negotiations, Southwest water managers this week released the first public draft of their short-term plan to manage the Colorado River as overuse and drought continue to strain a water supply that supports 40 million people from Wyoming to Nevada.

The complex plan is meant to defer more severe shortage conditions on the river as negotiators in the seven-state Colorado River Basin work out an even more complex long-term framework for a century-old system challenged by higher temperatures and changes in precipitation.

Infighting and a wet start to 2017 had put the plans on hold, but discussions resumed again this year with abysmal snowpack across the basin and forecasts of a shortage as early as 2020 led federal water managers at the Bureau of Reclamation to call for a plan by the end of the year.

Water managers said releasing the draft “Drought Contingency Plan” on Wednesday was a milestone, particularly after a spring of public sparring between different factions on the river.

The Southern Nevada Water Authority's board will consider the plan and vote on it next month.

The plan asks Colorado River water users to make cuts to their supply in an effort to store more water in reservoirs like Lake Mead, the country’s largest storage pool and a symbol of drought across the West. The reservoir, impounded behind the Hoover Dam outside of Las Vegas, is lined by an eerie bathtub ring that shows where the water line used to be, about 140 feet higher.

“I think it shows that we are on track to try to get [a drought plan] done by the end of the year,” said John Entsminger, the general manager of the Southern Nevada Water Authority. “The [drought plan] is an incredibly important set of documents. It demonstrates that the seven states are still capable of coming together and managing this river in the case of changing conditions.”

No easy way to conserve

During a prolonged drought, the plan requires water users to double down on voluntary cuts as a way to keep more water in Lake Mead and Lake Powell, the system’s second-largest reservoir upstream of Lake Mead. If the reservoirs dry up, the seven states risk running afoul of multiple laws that govern the river — the incentive driving everyone to come up with a proactive plan.

If Lake Mead drops another 55 feet, the federal government could throw out the playbook and force even deeper cuts. Most water users want to avoid the uncertainty that comes with that.

“We need to be proactive,” said Jeffrey Kightlinger, the general manager of the Metropolitan, a wholesale water seller for Southern California cities. “We feel it is better to control our own fate.”

If Lake Powell drops even lower, Glen Canyon Dam will produce less hydropower, the revenue of which supports operations and endangered species compliance. More importantly, low levels at Lake Powell put the Upper Basin (Colorado, New Mexico, Utah and Wyoming) in a precarious long-term position. The river’s upper division is required to send a certain amount of water from Powell to Lake Mead every year to fulfill their obligations under the 1922 Colorado River Compact. If they don’t, downstream users in the Lower Basin (Arizona, California, Nevada) can force the Upper Basin to curtail water use. This tool is referred to as a “Compact Call.”

Without steps like the drought plan, “the system is going to crash,” said Andy Mueller, who runs the Colorado River District, which focuses on protecting river water in Western Colorado.

"What that means up here is we think it’s possible we will get a call," he said.

But as Mueller also concedes, the devil is in the details. Asking users to conserve more water — and in turn, use less — is a challenging, expensive, and often unpopular proposition. Now that a public draft of the plan is out in public, water districts across the basin must review the plans and sign off on them. Even though Nevada is ready to sign off on the plan and has been ready for more than a year, other water users still have concerns about the conservation measures.

In Arizona, where the cuts would be steepest, state officials are still working on an intra-state agreement that would be palatable for its state legislature, which must approve the plan. To get there, Arizona officials are looking to find ways to mitigate cuts that would disproportionately fall on low-priority agricultural users in Pinal County outside of Phoenix. Paul Orme, a lawyer for the farming community, said that Arizona officials presented a mitigation plan on Wednesday, but it faded corners from other water users — cities and tribes — that would have to sacrifice their water.

“I can't really answer your question: Where do we go from there?" said Orme.

But he added that Pinal County farmers have significant leverage in the state’s legislature.

“There are folks in the Arizona legislature who are very much interested in seeing Pinal County agriculture survive," Orme said.

California is also working toward an intra-state agreement between the Metropolitan Water District  and agricultural users over how the cuts would work. Kightlinger said there had been some back-and-forth over what percentage Metropolitan and each agricultural district would conserve to boost Lake Mead’s elevation, but the parties are close to a tentative agreement.

“There’s a high likelihood we are going to complete this,” he said.

There are still key details to work out in Colorado too. Although Mueller agrees with the concept of sending more water to Lake Powell, he said conservation should not fall disproportionately on the backs of farms, ranches and orchards in Western Colorado. Mueller said he wants to see a commitment from cities that they contribute an equal amount to boost reservoir levels at Powell.

“[Conservation] water should come equally from both,” he said.

Although Las Vegas gets 90 percent of its water supply from the Colorado River, Entsminger said the utility will be able to easily absorb the cuts, which kick in once the lake dips below a certain elevation. The region, Entsminger argues, has a more secure supply than other water users because it can access water through a pumping system, even if the lake falls so low that no water can be delivered out of the Hoover Dam to Arizona or California.

In drought negotiations, that puts Nevada in a unique situation. Even though it is the most arid state in the country’s most arid region, it has less to lose than others. In a recent podcast with The Nevada Independent, Entsminger likened the state’s position to that of Switzerland.

In these negotiations, Entsminger said Nevada helped bridge a divide between the Upper Basin and the Lower Basin. The agreement Nevada helped hammer out is a key part of the drought plan. It allows states like Colorado to “bank” conserved water in Lake Powell without sending it to Lake Mead under the reservoir’s current operating rules; it avoids the weird situation in which the benefit of the Upper Basin’s conserved water is enjoyed by the Lower Basin.

That was at the crux of a disagreement earlier this year, when the Upper Basin states released a letter to the Central Arizona Project, which controls Arizona’s Colorado River canal, of placing water orders to manipulate in such a way that they could take more water from Lake Powell.

"We saw that the water that was being saved was pulled down the river by convenient timing of orders from the Central Arizona Project,” Mueller said. "We weren't very happy with that.”

“It's very big from an Upper Basin, Lower Basin relationship perspective that we are going to set aside some of the dogma of the river,” Entsminger said during an interview this week.

James Eklund, Colorado’s chief negotiator in the drought talks, said Entsminger played a helpful role in bringing all of the various interests together to hammer out a deal.

“He's been a calm voice in the discussions," he said.

But creating a “bank” in the Upper Basin comes with its own legal and funding challenges. Who pays to incentivize conservation? Who gets title to the conserved water? How do you account for it? And how do you shepherd it to Lake Powell without other users diverting it along the way?

"Our position has been cautious optimism," said Kightlinger, who represents Southern California users. "We've given them [a go-ahead] on the construct but we really want to see the details."

How complicated is all of this?

The drought plan is so complex and involves so many side agreements that it has come to mean something different to different groups. Almost everyone agrees that it is a short-term fix to a long-term problem — climate change and overuse mean there is less water to go around.

Water managers are not even sure what to call it.

It’s about drought, yes. But some take issue with that word because it suggests that the system will recover from the conditions that have drawn down Lake Mead to its lowest elevation since it was fully filled. Eklund said that a more suitable name could be the “Climate Contingency Plan.”

“It gets away from the notion that we are going to get bailed out by the weather,” he said.

Eric Kuhn, a former general manager of the Colorado River District who is working on a book about the history of Colorado River hydrology, agreed that using the term “drought” is flawed.

In many ways, the drought plan is a first step. For conservation groups, it is a way to create the reliability needed to tackle other important issues, like habitat and the general health of the river.

“Reliability of the Colorado River water supply is important both to people and to nature,” said Jennifer Pitt, who works on river issues for the Audubon Society. “We are very encouraged to see the progress that is being made toward adopting this [plan] and we know that is not the end of the story. That's the beginning of the story. There’s more work to do."

For others, it’s a prelude to future negotiations. Once the conservation plan is finalized, the conversation will shift to long-term planning. Right now, water managers are operating under a set of guidelines completed in 2007. Those expire in 2026 but negotiations for new guidelines begin in 2020. The plans will likely go through an extensive environmental review. The purpose of the drought plan, Entsminger and others said, is to ensure water users can get to 2026 without severe shortages.

"The question is what if this drought continues,” Entsminger said. “What if climate change makes the hydrology worse than anything we’ve seen or modeled? Then what does the next iteration of Colorado River management look like?"