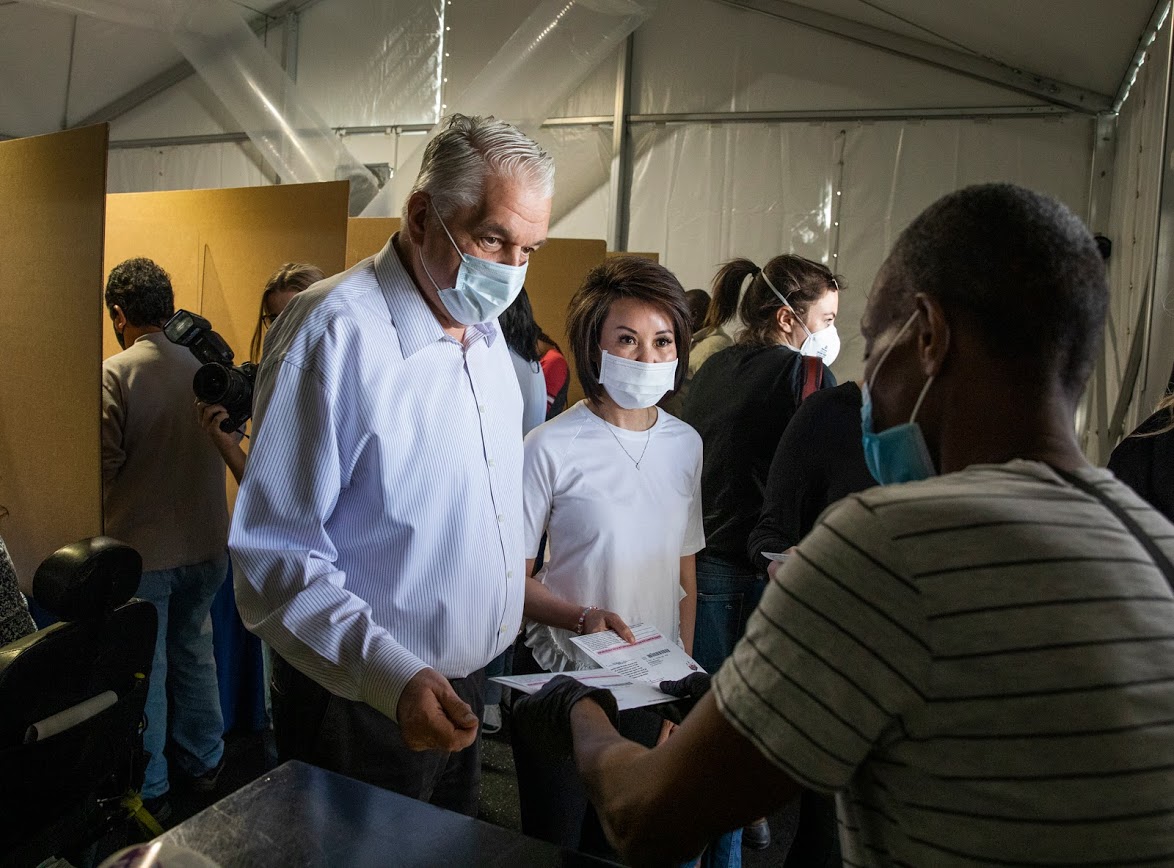 Take a look at any of Gov. Steve Sisolak’s posts on Facebook, Twitter or other social media networks, and it isn’t difficult to find sharply critical comments or personal insults over his decisions in handling the COVID-19 pandemic.

But for Steve Feeder, a 60-year-old Clark County resident, his comments on Sisolak’s Facebook page this spring calling the governor a “tyrant” and stating that “like Hong Kong protesters we need to arm ourselves and form a militia and fight back” have resulted in real-world consequences — criminal misdemeanor charges.

Feeder is now awaiting a trial date next year over a series of Facebook comments made in May 2020 that sharply criticized Sisolak’s initial handling of the COVID-19 pandemic, after a Las Vegas Township Judge ruled in October that the state had met a minimal evidentiary standard for the misdemeanor crime of “inciting breach of peace.”

Several of his comments made unspecified violent calls to action against the state’s Democratic governor.

“In any WAR which we are now in sheep will be casualties but we must March on,” he wrote in one comment on a May 19 post regarding the number of COVID-19 tests in the state. “If you enjoy getting [f*cked] in the SPHINCTER each morning continue to write here and get no results. It's time to fight back. If not say hello to your new TYRANT leader.”

Other incendiary remarks posted on Facebook by Feeder and cited by state prosecutors include more than three dozen instances of leaving a comment telling people to “arm themselves, form a militia, and go to war with the government,” a photo of Sisolak superimposed as a Nazi, and a GIF moving image of a gun pointed at a man’s head with the caption “I thought I saw John Wilkes Booth in the house.”

Prosecutors with the state Attorney’s General office said during a court hearing they often decline to bring charges just on social media-related threats directed at the governor and other public officials owing to the broad free speech protections in the First Amendment, but that Feeder’s comments were specific enough to warrant criminal charges.

“If you count all the threats, there's 34 of the exact same threats pasted on Governor Sisolak's page, which is open to the public for any crazy person to read it and act on it regardless of whether the defendant intended for somebody to act on it,” Deputy Attorney General Michael Kovac said during a preliminary hearing on the case in October in Las Vegas Justice Court. “The fact that he's posting that to Governor Sisolak's page shows a subjective intent to terrorize the governor. There's no other reason for him to post it there.”

Feeder was offered a plea deal prior to his preliminary hearing in Las Vegas Justice Court, which would have entailed a guilty plea to a single misdemeanor, a promise to stay out of trouble for six months, a $1,000 fine and a 120-day suspended sentence.

But an attorney for Feeder, Jay Maynard (who didn’t respond to an emailed request for comment), said in court filings and transcripts that his rhetoric — while incendiary — did not rise to the level of criminal conduct and are afforded free speech protections under the First Amendment. Feeder has pleaded not guilty to all charges, and has a jury trial set for June 2021.

Feeder’s attorney noted during a preliminary hearing that state prosecutors presented no evidence that Feeder had purchased a gun, planned a trip to Carson City, attempted to directly contact Sisolak or done anything beyond posting comments on Facebook. They also said his speech was not a specific enough call for violent action to warrant criminal proceedings.

“He was upset. Absolutely. He used some very pointed language. Absolutely. But he was protesting the fact that we had been in a quarantine for — as he put it at the time — 60 days, and that is well within his First Amendment right,” Feeder’s attorney said during that same Justice Court hearing in October. “Indeed, to be able to complain to our government is the most essential of the First Amendment rights. Political speech is protected beyond any other form of speech. It is sacrosanct and it is absolutely essential to the proper functioning of our democracy.”

Similar to federal law, Nevada has several laws on the books that criminalize making specific threats against an elected official. Feeder was initially charged with three crimes, including:

Las Vegas Township Judge Karen Bennett-Haron ruled during an October preliminary hearing that state prosecutors had only met an initial standard of “slight or marginal evidence” on the count of publishing matter inciting breach of peace (a law added in 1911 which hasn’t been updated since), with the other two counts not sufficient to meet that evidentiary burden. That evidentiary standard is set at a higher level (proof beyond a reasonable doubt) in a misdemeanor case during the actual court proceedings.

Colter Earl of the Nevada Department of Public Safety, assigned to the investigative division as a detective, testified that he began looking into the case after receiving a complaint from the state’s Dignitary Protection Detail regarding “threats” made against Sisolak by Feeder on his Facebook page.

Earl told the court that he conducted a “knock-and-talk” investigation in May 2020 at the home of Feeder, who admitted to posting the comments on Sisolak’s Facebook page.

“His response was that his wife called him an idiot and that when I had showed up at his house that I was there for his rant,” Earl said, according to a court transcript. “He described himself basically as very angry and upset regarding the State's action in the COVID-19 response.”

Earl said that his division did not have a “rule book” determining when it was appropriate to investigate or bring charges related to social media threats, but that his division takes complaints from either public officials or from the Dignitary Protection Detail before conducting an initial investigation.

Investigators with the state also pointed to a litany of other comments left by Feeder, including calls for “civil disobedience,” telling the governor that “your [sic] the CANCER and your slow painful passing will be the cure” and saying that a family friend had prayed for “death to the tyrant and his family.”

While acknowledging that Feeder hadn’t taken any direct action beyond the Facebook posts, state prosecutors wrote in a court filing that making the threats in a “popular, public online forum amplifies the fear that Defendant (Feeder) might find a receptive audience of like-minded individuals willing to carry out such threats.”

They cited recent cases including the arrest of three alleged members of the “Boogaloo” extremist movement in Las Vegas and the resignation of the state’s former Department of Employment, Training and Rehabilitation Director Heather Korbulic over threats made to her safety after less than two months on the job.

“It is an environment on edge, filled with angry, impulsive, and dangerous nutcases, many of whom are armed and appear ready to take action,” prosecutors with the attorney general’s office said in a filing. “It takes only one of these nutcases to be moved by one of these exhortations and decide to cross the oftentimes fine line separating vitriol from violence.”

But Feeder’s attorney still holds that the state failed to meet the minimum standard needed to overcome First Amendment protections: an “immediate call to an audience that the speaker knows is receptive.”

“Crazy people aren't the standard,” Feeder’s attorney Maynard said during the June evidentiary hearing. “The speaker has to know that his audience is receptive to an immediate calling. We don't see that anywhere.”