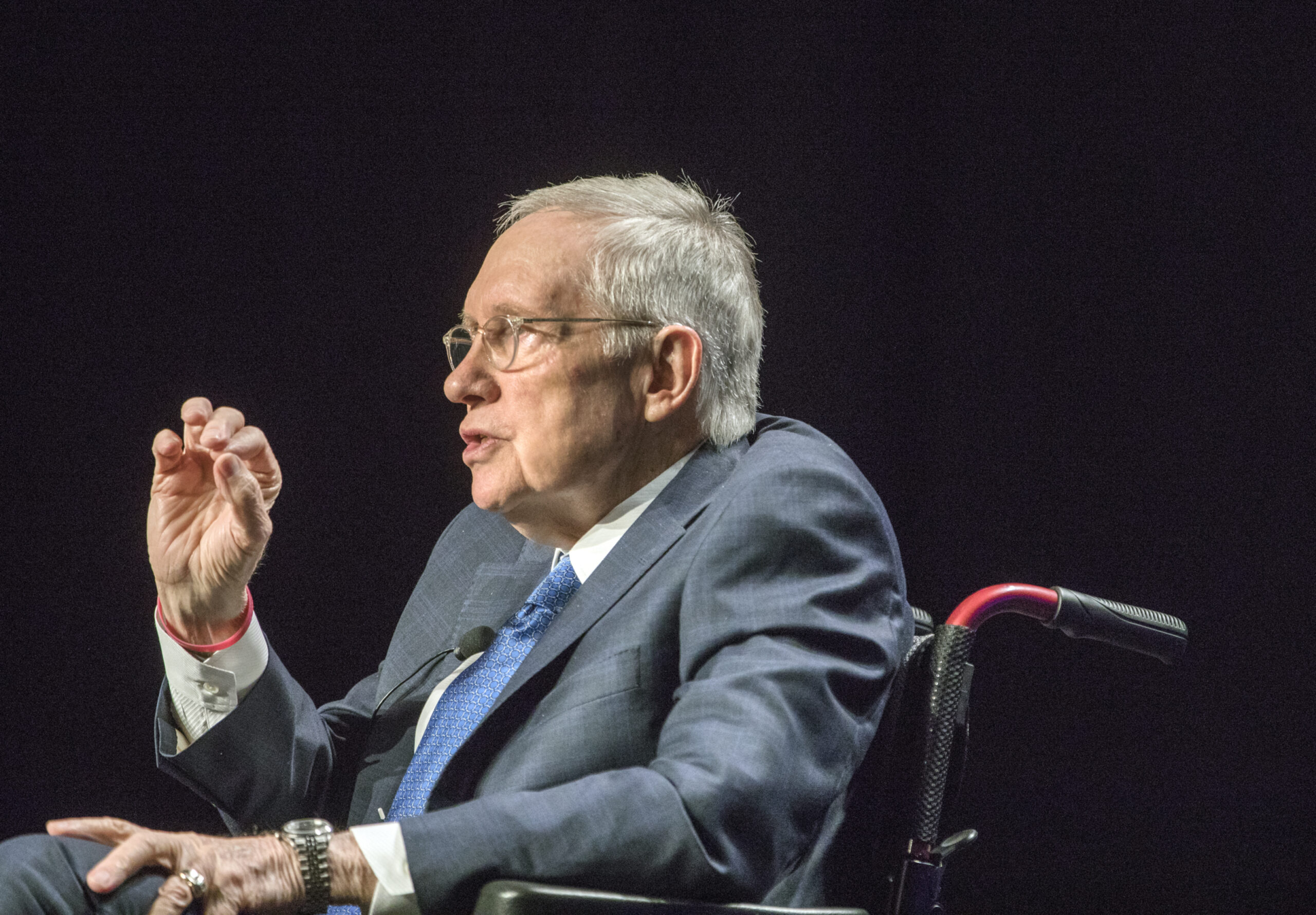 Oh sure, there will be leaders who grew up in unimaginable poverty. Or those who are more workhorse than showhorse. Or who dominate their state’s political apparatus.

But no one will ever have the conjunctions Harry Reid put together: A poor kid from Nowhere USA who escaped his hardscrabble beginnings and became the state’s youngest-ever lieutenant governor and then lost both a U.S. Senate race (by 600 votes) and mayor’s race (in a landslide) and then was resurrected by his mentor (Gov. Mike O’Callaghan) to serve as the state’s top casino regulator where he confronted the mob and both helped and was investigated by the FBI and who seized on a new congressional seat to return to elected politics and who then won the same Senate seat he lost 12 years earlier and who ascended to heights where no Nevadan had gone before and who saved a president’s first-term agenda and who became Nevada’s electoral gatekeeper, creating and destroying candidacies, and who made a tiny state a national force that mattered and who is, barely arguably, the most important public figure in Nevada history.

Harry Mason Reid, who died Tuesday at 82, never stopped moving forward, always searching for the light, making the deals, cajoling those he could with his strategic brilliance, running over those he couldn’t without grace or remorse, never looking back.

He just didn’t have time or the temperament for social niceties or for the self-editing mechanism most politicians have. But the caricature of Harry Reid – the former boxer who was not afraid to land a low blow, the ruthless tactician who would do anything to win, the charismatically challenged curmudgeon – is so one-dimensional.

All humans are complex, but some are more complex than others. Reid was as kind in private to people, important and not, as he was dismissive, even nasty to foes in public. He engendered – and still does even in death – deeper loyalty from his staffers and others than any pol I have encountered. And his six-decades-plus love affair with his wife, Landra, is one for the ages.

Reid’s dedication to his family and especially his wife is an untold story that will be told in the book I am writing about the most powerful man in the history of Nevada politics. And he was that, with the only other contender the execrable Pat McCarran, whose name was removed from the Las Vegas airport and replaced with Reid’s this month.

It may be hard for some to believe that Reid, the man who called Bush 43 a “loser,” who made unsupported allegations about Mitt Romney paying taxes and who even once referred to Barack Obama as having “no Negro dialect, unless he wanted to have one,” could be so kind, so caring in private. There are many, many stories like this one, of Reid’s private acts of kindness and compassion.

This will do little to mollify his legion of critics, many of whom took to social media upon news of his death to put out unspeakably cruel sentiments – who takes the time to declare “good riddance” after someone dies? I am fairly certain Reid would not care about any of that, except for the effect it had on his family. He knew he could be polarizing and offensive, but he also knew that when it came time to run for re-election, his incomparable staff would save him. And save him they did, in 1998, by 400 votes, and in 2010, when no one thought he would survive. It’s almost as if he decided he could not be anyone but who he was, and he planned to offset that with countless personal connections to strangers and by hiring the best available operatives.

That’s how he survived for so long, with an indomitable will, private connections and peerless staffers. What politician do you know who doesn’t care what people think of him? What elected official just says anything that comes into his head? Who survives pancreatic cancer for nearly four years?

Indeed, Reid’s last couple of weeks of life were characterized by his refusing to succumb – he texted me as recently as two weeks ago. Until he finally, unimaginably could fight the good fight no more.

As much as he cared naught for what people wrote about him, Reid brooked no criticism of his family. I know. I know because he cut me off for years after I wrote critical columns about his children.

“It was never about what you wrote about me,” Reid told me when he summoned me to his Bellagio office and agreed to cooperate for the book. “It was always about my family.”

Don’t misunderstand: I come not to praise Reid, but I also do not want the good he did to be interred with his bones. Trust me – he would not want this to be a love letter, just as he told me he knew the book would not be all sweetness and light.

It’s not that he didn’t care; he just wanted the real story told.

For all the bad he will be remembered for by some – his role in polarizing D.C., his brandishing of the nuclear option, his smashmouth approach to politics – Reid did what few have done: He changed history. Several times.

He helped talk Obama into running for president. He made sure Obama’s first-year agenda passed – perhaps averting a depression, ensuring millions had health care, health care he never had as a child. When Hillary Clinton was in trouble in 2016 during the primaries, he quietly ensured Bernie Sanders’s momentum was stopped. He saved the Las Vegas Strip during The Great Recession, going so far as to threaten bankers MGM Resorts needed to survive. He was prescient on renewable energy, the Hispanic vote in Nevada and public lands.

He was a man of contradictions who either evolved in his views or changed them for political reasons, depending on your point of view.

Who else could be revered by environmentalists and yet be cozy with the mining industry? Who could have given a nativist speech on the Senate floor and later ensure the Dream Act passed? Who else could have been a devout Mormon, yet eventually press for gay marriage, even speaking at a gay staffer’s wedding?

Regrets? He had very few. Only one, in fact, he told me: Voting for the Iraq War.

Reid had no time for such feelings. That would mean looking back, which he rarely did. He was too busy, no time for introspection or even for saying “goodbye” on the phone.

Reid’s place in the national firmament will be forever debated – the good, the bad and the ugly. His use of the nuclear option, especially, will be seen as a throughline to Justices Gorsuch, Kavanaugh and Barrett. And his style will be cited as part of the slow degradation of the national political discourse.

But his impact on the state he loved cannot be questioned. All roads through Nevada, figuratively and literally, ran through Harry Reid.

He hated the word “pork” – he saw them all as essential projects – and he brought hundreds of millions of dollars to Nevada, including rural counties that rewarded him by hanging him in effigy and voting against him by landslides. But it was the road not built, the road that could have led to trucks of nuclear waste rolling through the state to Yucca Mountain, that may have been his greatest Nevada accomplishment.

If Reid had not ascended to the summit, waste would have descended on the state. Harry Reid stopped Yucca Mountain. Period. Full stop.

Reid built many intangible structures, too, including the enduring Democratic political machine named for him and too many careers to mention, including those of both current senators, Catherine Cortez Masto, whom he anointed as his successor in 2016, and Jacky Rosen, whom he plucked from obscurity to run for Congress and then against Dean Heller four years ago.

I knew a lot about Reid before I started researching the book – and I learned a lot more this year talking to him, interviewing others and looking at his papers. I consider myself lucky to have spent hours with him, experiencing his laconic style and his lesser known wry humor. He gave me insight and quotes that amplified my knowledge and will enliven his story.

This has been a year bookended by prominent deaths in Nevada – Sheldon Adelson, a seminal figure in gaming, at the beginning, and Reid, a towering influence in politics, at the end. Indeed, Reid and Adelson were not all that dissimilar – blunt, polarizing and supremely influential and accomplished. They liked each other, actually, and had a fascinating private relationship.

The difference, perhaps, is that Adelson had several peers in his sphere – Steve Wynn, Kirk Kerkorian, at least. But Harry Reid, the master of the Senate and the king of Nevada, stands alone.

Jon Ralston is the founder and CEO of The Nevada Independent. He has covered politics in Nevada for more than 35 years and is writing a biography on Harry Reid for Simon & Schuster.