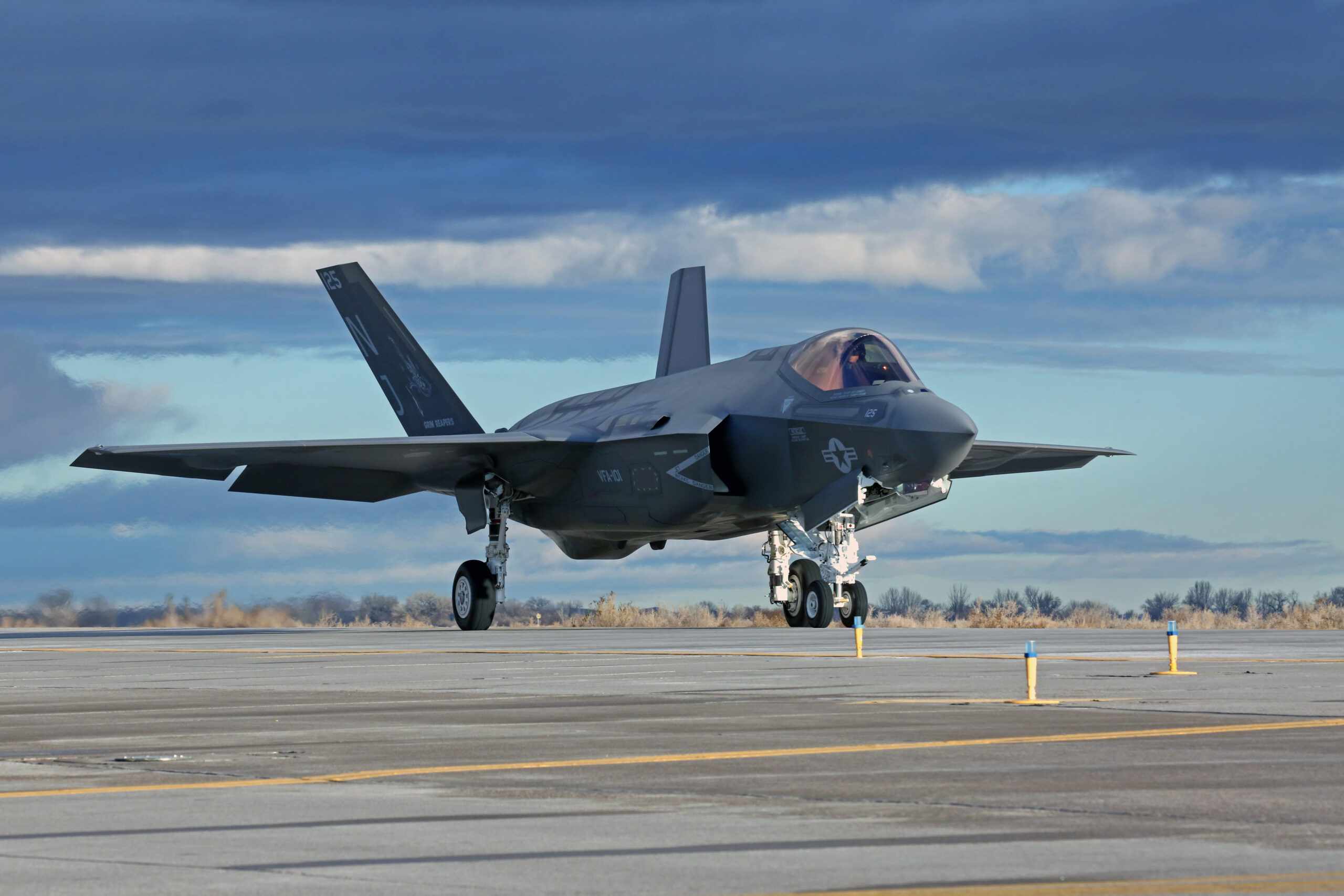 The turnout was high for the central Nevada town of Gabbs (population: 269). On a cold, foggy Monday night, about 60 people sat in the gym bleachers of Gabbs School to watch officials from the U.S. Navy present a proposal to expand Naval Air Station Fallon by about 600,000 acres.

Even among those who support the military in Gabbs and throughout Northern Nevada, the Navy’s plan is a subject of debate. The proposed land transfer would cut off some access to public land for hikers, miners, local ranchers, hunters and the dozens of rockhounds who fill up at the town’s one gas station over the summer when they are collecting minerals. In Gabbs, it would also mean the re-routing of part of state road and moving a nearby natural gas pipeline.

“We fully support anything and everything the Navy needs in general,” Lorinda Wichman, a Nye County commissioner, said during a public comment period after the Navy’s presentation on Monday evening. “However there are a few things I’d like to point out. We know that the [land withdrawal] will substantially increase the impacts to Nye County and to Gabbs.”

For four years and under two different administrations, Navy officers have argued that they need more space in the Fallon range to train for modern warfare. The range in Fallon, known for being the home to TOPGUN, is the Navy’s primary facility to prepare all carrier air wings for deployment. Navy officials believe that the current site, stretching across about 240,000 acres, does not provide enough land to test modern weapons launched at greater distances and altitudes.

“The way we are doing it now is not even close to what we do in combat,” Capt. David Halloran, the base's commanding officer, said in Gabbs. “And that’s what we’re missing out on.”

To fix the problem, the military has proposed taking ownership of 618,727 acres of federal land and an additional 65,153 acres of non-federal land, an action that would expand the training complex to nearly one million acres. Federal land managers currently allow the public to access much of the area for grazing, hunting, mineral exploration and geothermal development. Due in large part to safety concerns, the military’s proposal would curtail many of those activities.

That has frustrated exploration geologists, conservationists and ranchers who could see mining claims, wilderness areas and grazing allotments affected by the closure of some of the land.

According to an exhaustive map created by the state, the area that the Navy is proposing to withdraw contains 13 mining districts and several areas with high geothermal potential.

Gov. Brian Sandoval, in recent months, has taken an active role in engaging the Navy on ways to alleviate those conflicts, including a meeting with the secretary of the Navy. State agencies proposed a “Nevada Alternative,” which they wanted the military to analyze in its Environmental Impact Statement released in November. After a meeting in September, Sandoval was able to secure a few compromises. The Navy agreed to close its range for two weeks to allow for a bighorn sheep hunt and make exceptions in certain areas for geothermal development.

But the Sandoval administration still has lingering concerns about the Navy’s plan, which it expressed in a memo to the congressional delegation on Nov. 15. The administration said that the Navy’s proposal did not go far enough in mitigating the economic impacts to rural counties.

The plan could still stymie geothermal development, especially if projects want to incorporate solar into their build-outs, and it lacked a formal proposal to address mitigation for Nevadans with claims and permits to graze, mine, or pump groundwater, according to the memo.

The Sandoval administration has pushed one possible solution, but it would likely get fierce pushback from environmental organizations. The Navy’s proposal calls for eliminating about 75,000 acres of three Wilderness Study Areas, federal land that is managed as wilderness and consequently blocked off from development. The Sandoval administration has lobbied the Navy to release the entire Wilderness Study Areas and two other wilderness study areas, making about 511,000 acres of protected land open to multiple use, which includes grazing, mining, hunting and recreational activities. That land, outside of the Navy’s purview, would still be accessible public land but would no longer have wilderness protections, a concern for at least one wilderness advocate.

“We look forward to working with our new governor and Nevada delegation to find innovative solutions to protect our wilderness study areas and allow for improved national defense,” Netherton wrote in an email.

Changing the Wilderness Study Areas to a less-protected land status would be the best way to offset the Navy’s impacts on geothermal, the Sandoval administration said in the memo to the delegation. But given opposition from environmental groups and tribes, it’s an open question as to whether Gov.-elect Steve Sisolak, a Democrat, would support Republican Sandoval’s approach.

Navy officials have noted that the draft proposal is just that: a draft.

To that end, the Navy has spent this week soliciting public comments at meetings throughout northern and central Nevada. In addition to the Gabbs meeting on Monday, the Navy has had meetings from Austin to Fallon, and it will host meetings in Lovelock and Reno on Thursday.

Many critics of the Navy’s plan have questioned whether they need so much land to conduct their exercises, a claim that Halloran pushed back on during the Gabbs meeting on Monday.

“If we could do this with less land, we would want to do it that way,” Halloran said. “I can not emphasize to you enough that the Navy does not want more land to manage in any way shape or form. This is a need, not a want. Before we go to combat, we want people trained properly.”

Dave Shaddrick, the president of the Nevada Mineral Exploration Coalition, said the Navy should try to train on its current lands or the hundreds of thousands of acres already owned by the military at the Tonopah Test Site and the Air Force’s Southern Nevada facilities, which operate in about 2.9 million acres of land. The Air Force’s Nellis Test and Training Range near Las Vegas is also pursuing a modernization plan to expand its size by about 300,000 acres.

“Virtually everyone has said that these lands that they are talking about taking from public use are very important lands,” he said. “There’s a tremendous amount of geothermal potential out there. There is a lot of mineral potential out there. They’re heavily used by recreators [and] hunters. None of us believe that the Navy has really justified such a dramatic step.”

Halloran said the Navy needed its own space, separate from the Air Force, because both ranges have fully booked schedules for training and are set up to meet particular needs.

“Nowhere else in the world does the Navy have the ability to train like it does in [Naval Air Station] Fallon,” he said during the Monday meeting. “This is the one location where we have the bombing ranges with the target sets that allow us to complete the training.”

Carl Erquiaga, the Nevada field representative for the Theodore Roosevelt Conservation Partnership, said the Navy has worked to mitigate some of the issues such as agreeing to re-open some land for a short hunt. But he said the proposal was “still a difficult pill to swallow.”

"It takes in an awful lot of land that is really important to me as an individual," said Erquiaga, who has hunted bighorn sheep, which roam the area that the military would take over.

Erquiaga, who is also a Churchill County commissioner, said that although the military is one of the county’s largest employers, he remains concerned about closing land to geothermal.

"We realize the Navy is a very important part of our community and our job base,” Erquiaga said. “They are probably the largest employer in the county. But another big economic driver is renewable energy. And there are some areas in there that are going to be off-limits."

In Gabbs on Monday night, Johnnie Bobb, chief of the Western Shoshone National Council, said that tribes were concerned with how the land conflicted with traditional sites and water.

“Our concern about this: It is happening where native people roam this country,” he said.

Before the meeting, residents talked to military officials and scanned presentation boards that the Navy set up on easels. Each board outlined the potential impacts of the Navy’s plan.

Update: This story was updated at 5:20 p.m. on Dec. 19 to clarify language about what activities fall under the "multiple use" of federal land.