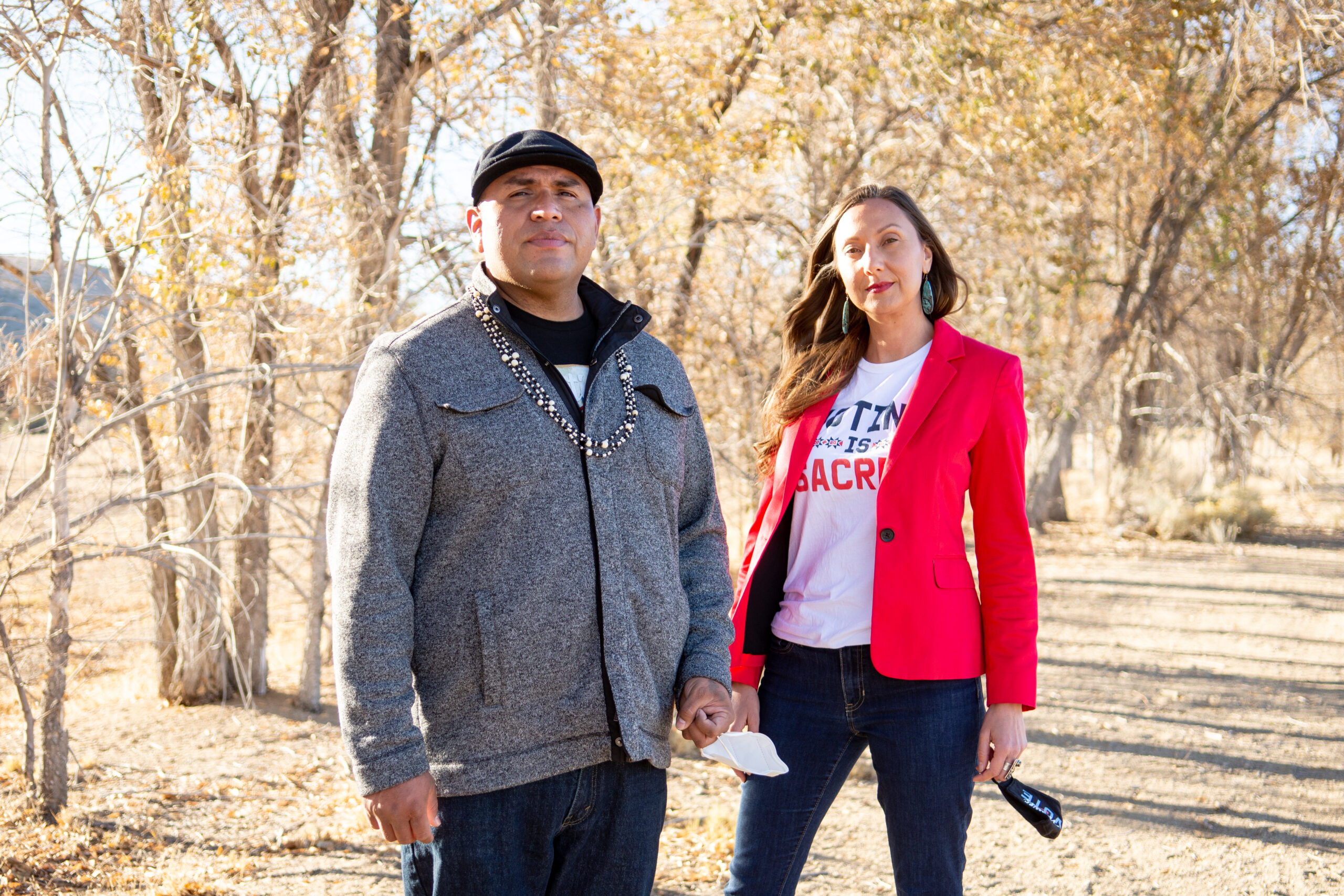 Historically, political campaigns haven’t invested the same amount of time, energy or resources to mobilize Native voters as with other demographic groups. Brian Melendez, founder of the Nevada Native American Caucus and coordinator for the Nevada Native Vote Project, sent a letter to the state Democratic Party Sunday, criticizing the party’s “inadequate” efforts to organize, communicate and engage Native leaders and voters. Melendez, an enrolled member of the Reno-Sparks Indian Colony, said that strategy requests made by the Native American Caucus were “delayed, denied or ignored.”

“Comprehensive Get Out The Vote efforts were present across the State; the lack of attention and resources provided to the Native community in Nevada is staggering. Steps must be taken to ensure increased coordination and communication with our leadership and the community,” he wrote.

The criticism comes in spite of the Democratic Party’s presence on tribal lands in Northern Nevada for early voting events and visits from Democratic presidential candidate Joe Biden’s Soul of the Nation bus tour on three reservations.

On the other hand, Melendez said President Donald Trump’s re-election campaign has done even less to rally Native voters in Nevada ahead of the election.

Melendez said it’s not in the best interest of either party to neglect Indian Country in Nevada, which could prove to be a powerful force if the population’s voters are mobilized successfully.

Historical data counting Native voters throughout past elections, as with most record-keeping for Indian Country, hardly exists, and the population is regularly left out of tracking in the race categories in election exit polls. Therefore, it’s difficult to determine the level of representation Native voters have had in Nevada in past elections, where eligible Latino voters make up nearly 20 percent of the state’s population, Black voters nine percent and Asian voters eight percent.

The 2010 Census counted 60,000 people of voting age across Nevada’s 27 tribes. But the Native population is historically undercounted in the census because of the number of reservations in geographically isolated areas, the lack of home addresses and other factors. Melendez said he believes this number is “inherently low.”

A Native American Rights Fund 2020 report states that of the 6.8 million Native people living in the U.S., nearly 4.7 million are over the age of 18 and eligible to vote. The report also states that there are more than 1 million eligible Native voters in the country who are not registered to vote.

Brian Melendez and his wife, Teresa Melendez, have been spearheading mobilization efforts in what’s turning out to be a noticeably different engagement and presence at the polls for Native voters. The pair argues that there’s too much at stake for Native people to forego voting in the election.

“We're talking about these existential threats to our environment, our natural environment —  having clean water and fresh air and the things that our people need to survive on this planet,” Brian Melendez said. “We don't believe, in our tribal communities, especially with COVID and everything else kind of plaguing our environment, that doing things the way that they have been done is going to help us or help the environment. So that means that people have to vote.”

The pair have been hosting virtual candidate forums, registration drives and get out the vote events in coordination with the Nevada Democratic Party, as well as social media campaigns featuring young Native voters making calls to action to inspire eligible Native voters that have stayed away from the polls in the past.

Food trucks, shaved ice cream and “voting is sacred” T-shirts were just a few of the incentives used to attract and energize voters at the Pyramid Lake and Reno-Sparks Indian Colony voting sites throughout October.

Northern Nevada Regional Director for the Biden campaign Michael Cullen told The Nevada Independent he’s excited by the energy he’s felt coming from the events and from talking to Native voters.

“I think our thought and strategy as a campaign is that every vote matters, right? Whether that's in Reno or Vegas or whether that's in Pyramid Lake Paiute Tribe or Reno-Sparks Indian Colony or wherever, and we can't leave any stone unturned. We can't take this for granted and we really need to meet communities where they are,” Cullen said.

Before Brian Melendez issued his critical letter to the Democratic Party Sunday evening, Cullen said Native voters present at the events had expressed gratitude to have campaign representatives spend time on their lands.

A young Native girl named Karianna, 6, told Cullen she wants to be Sen. Jacky Rosen when she grows up, a moment captured on video that prompted Rosen to reach out to the young girl and her family.

The moment was a highlight of the campaign season for Cullen, who said he’s inspired by the engagement with young voters who can’t vote yet, but one day will.

While Biden’s bus tour made stops at three of the state’s 32 reservations and colonies, President Donald Trump’s re-election campaign didn’t have any physical presence on tribal land ahead of the election.

Nevada Trump Victory spokesperson Keith Schipper told The Nevada Independent that the campaign has reached voters across the state “in every community” but did not specify how many voters were Native.

“President Trump has delivered for Native Americans. From sending ventilators and teams to build medical centers for the Navajo Nation in response to the COVID-19 pandemic, to restarting the Council on Native American Affairs, Native voters in Nevada know the President has their backs. Trump Victory’s permanent presence in Nevada since 2016 has allowed us to build relationships with voters in every community to deliver the Silver State for the President on November 3,” Schipper wrote in a statement via email.

The Navajo Nation spans Arizona, Utah and New Mexico but does not include Nevada Native Americans.

As for the restoration of the Council on Native American Affairs, originally established under President Barack Obama, the Biden campaign has countered that Trump only recently re-established it after three years in office, ahead of the election and after foregoing a White House Tribal Nations Conference during his presidency.

Trump’s Putting America’s First Peoples First plan is shorter and though it includes many of the same issues addressed by the Biden-Harris plan, it notably excludes a pledge to address climate change, a high-priority issue for Native voters, according to Brian Melendez. The president’s plan includes building a thriving economy, championing heritage and education, ensuring better health care by improving care delivery and coordination through the Indian Health Service and securing safer communities.

The widespread participation Brian and Teresa Melendez and others have been working hard to foster through their outreach and education efforts doesn’t come without significant obstacles that have historically suppressed Native voter turnout.

Native people’s right to vote was approved by Congress in 1924, but wasn’t expanded across every state in the U.S. until 58 years ago in 1962. Since then, Native American Nevadans have struggled with compounding factors that make casting their ballots more difficult than it is for other demographic groups.

These factors include long distances between reservations and polling locations, lack of transportation, lack of mailboxes and home addresses, limited internet access and a lack of ballot drop boxes on reservations. While casting a ballot is one thing, even registering to vote can be difficult for Native people who lack a state-issued identification card and only have a tribal identification card, which cannot be used to register to vote.

A report released this year by the Native American Rights Fund, “Obstacles at Every Turn,” details the layered historical obstacles and calls the rural and isolated nature of reservations “the tyranny of distance.”

Distrust in federal and state governments is an outgrowth of these long-standing obstacles and an added layer to the factors keeping Native voters from the polls.

“We know that for a fact there are tribal people that are completely disenfranchised or disheartened and they just don't have any reliability in the system,” Brian Melendez said. “So, we try to do our best to explain to them why they should vote. That's the other end of it.”

Brian and Teresa Melendez say they are acutely aware of the obstacles keeping eligible voters from the polls in Nevada.

In a letter addressed to Secretary of State Barbara Cegavske and Elko and Humboldt county election officials, the Nevada Native Vote Project and the All Voting is Local Nevada chapter urged the provision of more in-person voting locations and ballot drop boxes closer to the Duck Valley Reservation in Elko County and the Fort McDermitt Reservation in Humboldt County.

When it comes to securing voting access for their communities, Native leaders understand they must advocate for themselves or continue to suffer neglect at the hands of their state, federal governments.

In 2016, the Pyramid Lake Paiute and Walker River tribes sued the state after they were denied requests for voter registration and polling places on tribal land. Earlier this year, the tribes sought to intervene in the Nevada GOP lawsuit attacking the state’s election law that allows ballots with unclear postmarks to be accepted up to three days after Election Day.

Likewise, Brian and Teresa Melendez created the Native American Caucus and lead the Nevada Native Vote Project in the hopes of balancing the scales of power in political spheres and creating lasting change in their communities.

“It's clear that the influence we need to have, it doesn't exist in these political spaces,” Teresa Melendez said. “So when we started this organizing work, it's important for this election, critically important election, probably the most important election of our lifetime. But we know that there's long-lasting ramifications and effects of the political organizing efforts that we're investing in right now.”