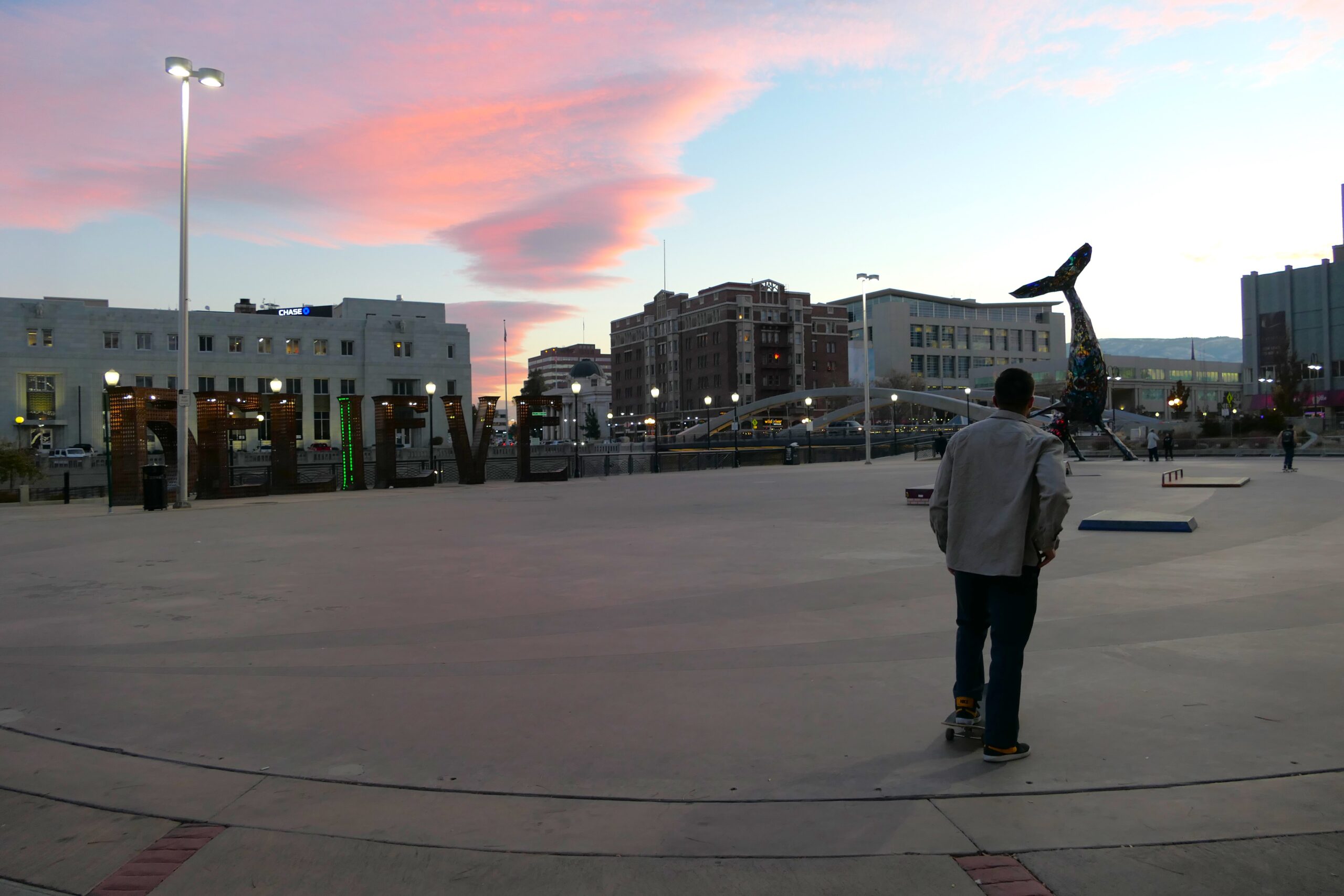 Reno City Plaza, an expanse of concrete sitting alongside the Truckee River, is a symbol of downtown life. Adorned with Burning Man art such as the space whale and Believe sign, it’s been the site of several celebrations, social justice protests or even just an open area for skaters to practice tricks.

It is also a gathering place for the unhoused population in Reno.

However, every Tuesday at 5 p.m., it serves a different purpose: A grassroots group of volunteers who call themselves Family Soup Mutual Aid hands out hot food, hygiene supplies, warm clothes, fentanyl testing strips and Narcan to the unhoused population who have been gathering at the plaza for at least the prior half hour.

“If you're hungry, get in line. If you need something, [they] try to help you here. [They] don't ask questions,” said one of the people who attends Family Soup Mutual Aid’s weekly dinner and supply event.

The Tuesday evening tradition started in October 2021, when co-founder Nicole Anagapesis noticed there were fewer places for the unhoused population to gather after the city plaza had been gated off. Anagapesis started asking people what they needed and told them to meet her back at the plaza on Tuesday night. It soon became a weekly event as Anagapesis’ friends joined her in bringing supplies to the plaza.

Family Soup Mutual Aid has stuck with the practice. Every Tuesday the group asks people what they need, and throughout the week, members do their best to gather those supplies. Some supplies come as community donations from Family Soup Mutual Aid. Some are given to drop-off centers in midtown Reno such as Kindred Hair Space, a midtown salon, and Renovate Wall Coverings, a local wallpaper and fabric business. Other supplies come from the volunteers' own pockets.

“It is a full-time job. And there's a lot of people that we know work at nonprofits and stuff like that, that get paid to do what we do,” Anagapesis said. “It's something that I live every single day in my life, and I think a lot of the organizers in this group are on the same page. It is definitely very rewarding, but it's incredibly exhausting.”

On this particular Tuesday night, about 10 volunteers of all different ages handed out food and supplies.

“It's kind of direct, I guess. I can really see the people I'm going to be helping,” said Jarod Zeoinski, a student at UNR who was among the helpers.

Twelve-year-old Lilli comes to give out supplies with her mom every week.

“One day, I kind of just said, like, ‘Oh, I kind of want to help with something and do something’ because I was just, like, sitting at home doing nothing. So I might as well do something with my time,” Lilli said as she took a break from giving out hot beverages.

Washoe County reported that 54 unhoused people died last year within the county, an increase of 20 percent from 2020 and more than double the number of deaths in 2016. The increase in deaths mirrors the growth of Reno’s unhoused population, which almost doubled from January 2021 to January 2022.

More than half the deaths reported this January were attributed to accidents including overdoses, collisions with vehicles and one drowning.

During the cold, dark months, peoples’ needs change. They need warm clothes, shelter and hot meals. Northern Nevada has already seen its first snow this year, and the nights are getting longer and colder.

Anagapesis said it can be challenging getting people what they need to stay warm, in part, because of the expense.

Shelter for the unhoused population in Northern Nevada remains a large need, and though there are a few shelters in the Reno area, many prefer to find their own shelter, Anagapesis said.

The Washoe County-owned Cares Campus, a warehouse-style homeless shelter, opened last year and has provided the unhoused population with several hundred beds, bathrooms and shower units. Despite this, Anagapesis echoes the sentiment of many activists for the unhoused: Local government could be doing better when dealing with the ever-growing unhoused population in Reno.

“There is kind of a blanket answer from local government right now, which is just get everybody to the Cares Campus when we know via anecdotal evidence and firsthand evidence that that place isn't safe for women. It's not safe for elderly people, people with disabilities,” Anagapesis said.

Anagapesis said she wants to see local governments allocate more funds to social programs and services while working with the unhoused population on a more case-by-case basis.

Dana Searcy, the housing and homeless services manager for Washoe County, said the county is still working on the Cares Campus.

“Safety is the team’s No. 1 priority and we have worked to bring services to the campus through the addition of 23 case managers, onsite security and medical services available seven days a week,” Searcy said in an email to The Nevada Independent.

Searcy said the Cares Campus was built quickly during the COVID-19 pandemic to provide enough space to social distance and the shelter is still developing. These in-progress updates to the Cares Campus include a women’s dorm with an 85-person capacity, and a dorm to meet the specific needs of the “frail and elderly” population. The latter will open next week with a capacity to shelter 118 people.

The Cares Campus has an overall capacity to shelter 604 people.

Though Anagapesis is proud of the work Family Soup Mutual Aid and the other mutual aids are doing to fill the gaps, she wishes more needs of the unhoused were met so there wouldn’t have to be so many gaps to fill.

Plus, Anagapesis said, this kind of activism can be addicting.

“We're happy that we can and we're grateful for the opportunity to a certain extent, but we don't want to be out here in the cold. We want to be home with our families,” Anagapesis said. “We're doing what we can for [the unhoused]. But there's no balance. Once you start, once you dip your toes into this level of activism … it's kind of hard to get out.”

This story was updated at 1:45 p.m. on 12/2/22 to add information from Washoe County on the Cares Campus shelter.