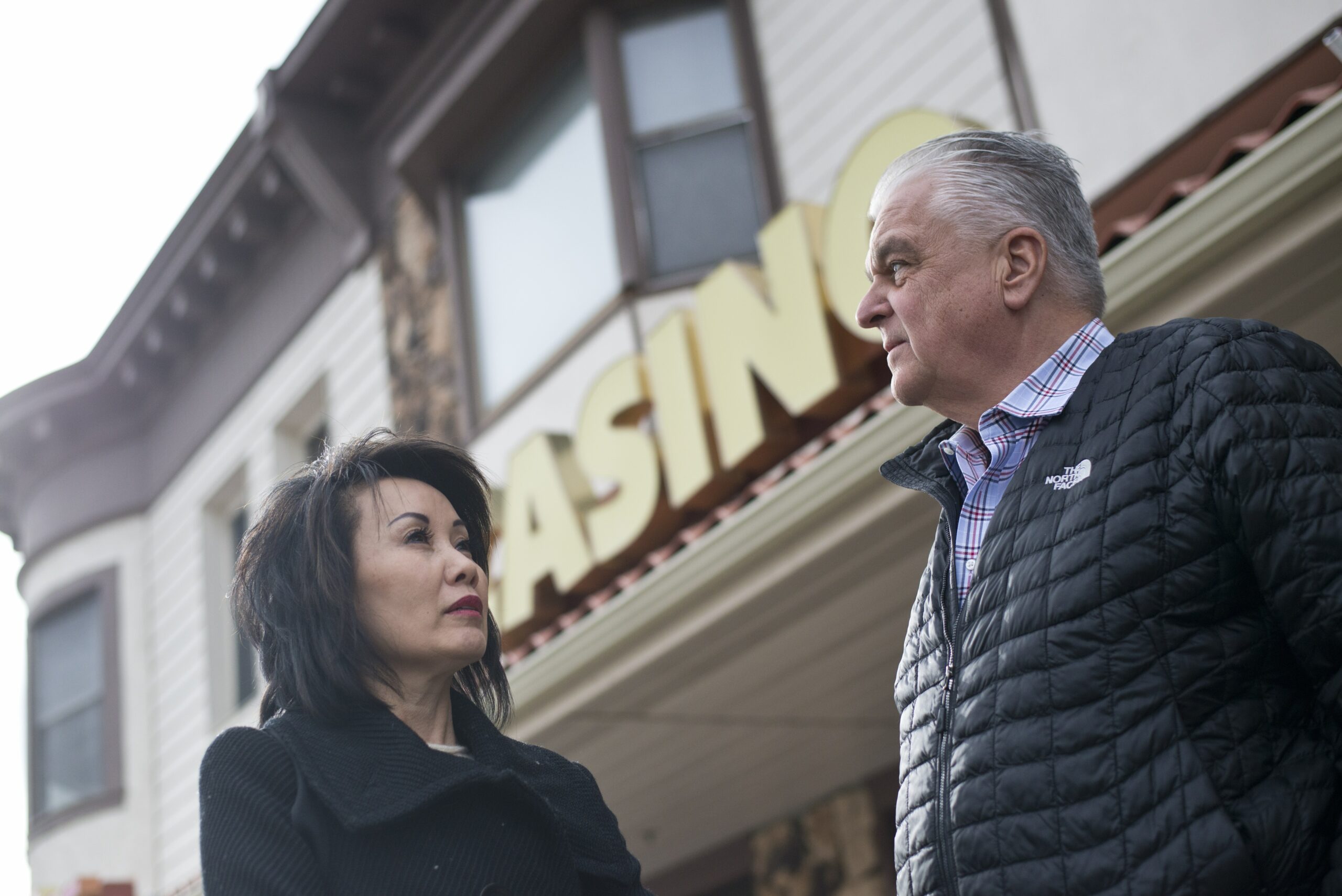 Gov. Steve Sisolak and first lady Kathy Sisolak were angrily berated and threatened by a pair of men at a Las Vegas restaurant over the weekend, including one who said “We should string you up by a lamp post right now, p—— boy.”

The video shared widely on social media and reported by the Las Vegas Review-Journal shows a one-minute encounter between Sisolak and a man who initially approaches him as if to take a photo, before saying “I can’t tell you what a piece of f—-ing s—- you are.”

The man and another individual then record themselves following Sisolak, his wife and daughter as they leave the Lindo Michoacan restaurant in Summerlin, continuing a profanity-heavy tirade against the governor touching on a variety of conspiratorial tropes, including claims that he was “hiding the Hydroxychloroquine” and calling him a “New World Order traitor piece of s—.”

The first individual continued: “You want to sell us all down the river. You working-for-China piece of s—-.” After the Sisolaks left the restaurant, he followed them continuing the tirade.

In a statement on Monday, Sisolak’s office said he was “deeply disappointed in how this incident unfolded, particularly with the language used to talk about First Lady Kathy Sisolak’s heritage.”

“We can disagree about the issues, but the personal attacks and threats are unwarranted, unwelcome and unbecoming behavior for Nevadans,” his office said in a statement.

His office added that it will have “no further comment on this incident as there is an ongoing investigation.” The Nevada State Police confirmed in a separate email on Monday that the office had opened an investigation into the matter, but declined to provide further details.

Ninfa Magna, the manager of the Lindo Michoacan restaurant, said the owner, Javier Barajas, is traveling out of the country. Magna said she was at the restaurant Sunday but did not see the incident with Sisolak, adding that she heard about it from her staff and watched the video for the first time on Monday.

She declined to comment on the incident other than to say she was saddened by what took place.

“There's a line of respect for other people, especially families,” Magna said in an interview. “There were families in here.”

The man in the video appears to be Justin Andersch, who runs a right-wing daily vlog called Cannabis and Combat. Andersch posted an alternative angle of the video on his Instagram account, and took credit for the video on his podcast.

Condemnation from other Nevada elected officials quickly poured in on social media Monday. Attorney General Aaron Ford tweeted that we “should denounce this verbal attack and racist diatribe against the Governor and First Lady,” adding that “Real patriots don’t act like this, and anyone perpetrating these actions should be held accountable.”

“The people who accosted the Governor and First Lady should be held accountable, and the politicians who encourage this kind of rhetoric and behavior should firmly denounce it,” she wrote on Twitter.

Several Republican elected officials and candidates spoke out against the video. Secretary of state candidate Jesse Haw called it “Unacceptable behavior” in a tweet, and Republican Assemblyman Tom Roberts said “This kind of conduct is reprehensible and has no place in Nevada.”

“This is a lesson to everyone that we’ve gone too far when full-time security is needed for the Governor and his wife,” Roberts, who is running for Clark County Sheriff, said on Twitter.

Nevada Republican Party Chair Michael McDonald said in a statement that "there is no place for the behavior and violent threats against the Governor we saw on that video from this weekend."

Republican gubernatorial candidate and Clark County Sheriff Joe Lombardo said in a statement that "no one deserves to be accosted while trying to enjoy a peaceful meal with their family. Hateful verbal abuse and violent threats have no place in our political system."

"This harmful rhetoric makes it difficult to have issue-based conversations with voters, and only serves to distract from the real issues facing everyday Nevadans," he said in an emailed statement. "If you're frustrated with this governor and his policies, like I am, the appropriate recourse is to vote him out at the ballot box this November."

Not all Nevada Republicans denounced the video. Las Vegas City Councilwoman and Republican gubernatorial candidate Michele Fiore told the Las Vegas Sun that Sisolak was "lucky it was just words" and "If you look at the history of dictators, pitchforks will be next."

Fellow gubernatorial candidate Joey Gilbert said in a Facebook post on Sunday that he “cannot think of a more deserving person than the corrupt, bought and paid for hack, Steve Sisolak — to be treated that way.”

“Hell no I do not condemn it,” he wrote. “You earned it Steve. You absolutely earned it.”