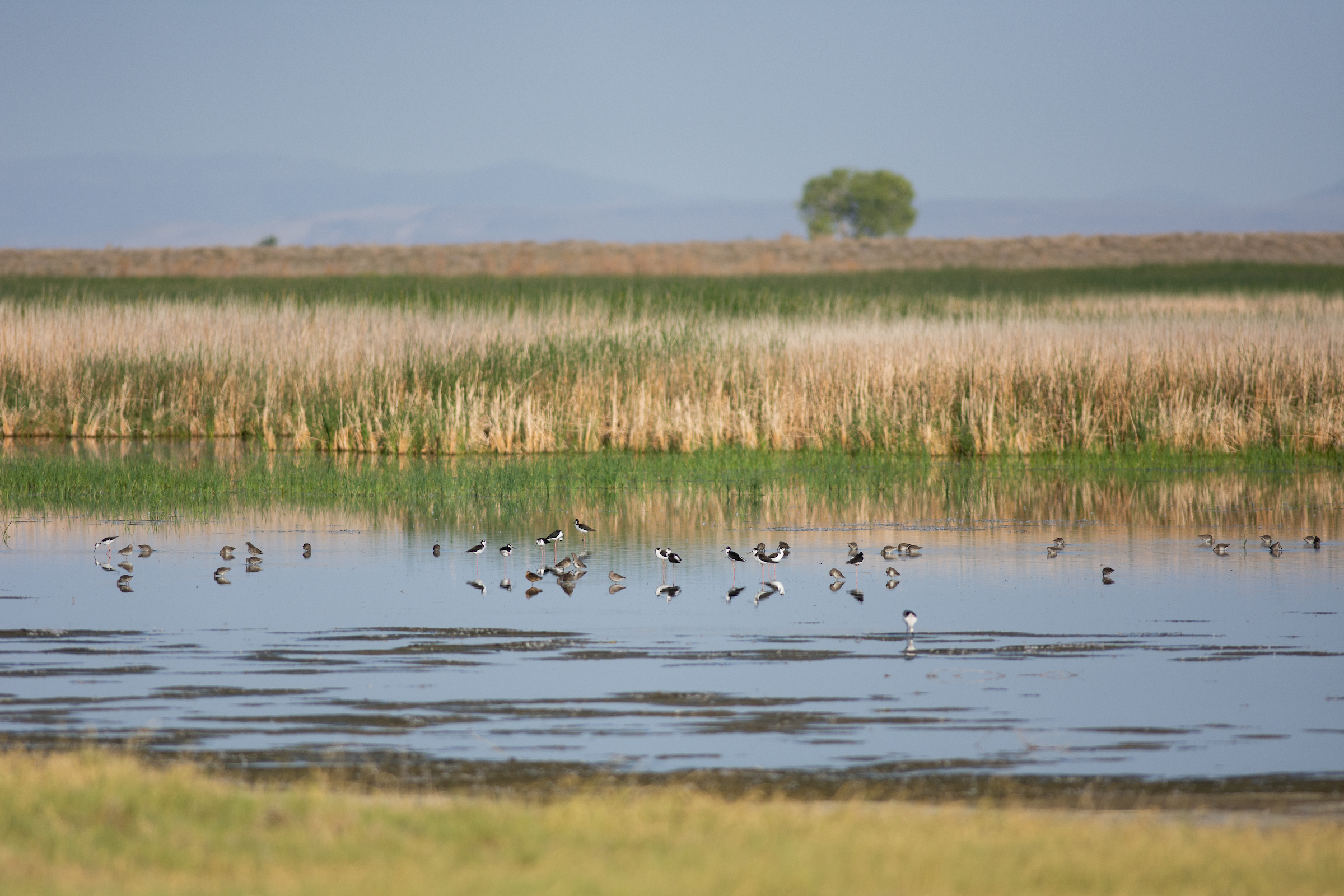 On a warm September morning, Mike Goddard pointed his scope toward a marshy pond within the Stillwater National Wildlife Refuge. What Goddard hoped to spot: The many migratory birds that forage in the shallow shores of the wetlands, once abundant in this area outside of Fallon.

“The short, stout ones with long, straight bills are long-billed dowitchers,” he observes, peering into the mounted spotting scope. “The big, white ones are American avocets. Then there are some small sandpipers over there to the west… We’ll go up and do a count here real quick.”

These species, known as shorebirds, connect Western Nevada’s patchwork of wetlands to the rest of the globe. Shorebirds log thousands of miles each year, migrating from the Arctic to more tropical climates. Along their worldwide journey, wetlands and saline lakes in the Great Basin, from Fallon to Salt Lake City, serve as important habitat to support foraging, resting and nesting.

Yet these lands have faced numerous threats in recent decades, both in Nevada and across much of the Pacific Flyway, a major pathway for migratory birds. Drought and water diversions have meant that less water is filling many of these arid wetlands. Warming temperatures have only added to the pressures on shorebirds, contributing to a decline in Great Basin populations.

It’s one of the reasons that counting shorebirds is so important, said Goddard, who worked as the wildlife refuge's manager for more than a decade before retiring in 2012. Population counts, over time, can help track species’ health. Since retiring, Goddard has trained volunteers, while advocating for wetland protections as a board member of the Lahontan Audubon Society.

Over the past several years, federal and state wildlife agencies have worked to improve habitat for shorebird species, acquiring land and water rights. Last year, after a roughly three-decade wait, the federal government transferred 23,000 acres of land to the state. But biologists also face limited water supplies, infrastructure constraints and the needs of many different species.

Jenni Jeffers, a biologist at the Nevada Department of Wildlife, calls it one big “juggling act.”

In general, Jeffers said, “drought and water availability across the Great Basin — and the whole Pacific Flyway — is the biggest challenge we’ve seen” for populations of shorebirds. Across the Great Basin, there are other stopping points for these birds, including Lake Abert in Oregon, the Great Salt Lake in Utah, Mono Lake in California and Walker Lake outside of Hawthorne.

Yet the valley wetlands have long been recognized as a significant piece of the landscape. The valley wetlands are split into three segments: the Stillwater National Wildlife Refuge, the Fallon Paiute Shoshone Tribal Wetlands and Carson Lake and Pasture, the area recently transferred to the state. Wildlife officials are currently developing a management plan for Carson Lake.

In 1988, the valley was added to the Western Hemisphere Shorebird Reserve Network as a site of hemispheric importance. It is also the site of some of the longest-running shorebird surveys in the region, with archived Nevada Department of Wildlife data going back nearly four decades.

But shorebirds do not arrive and depart in one fell swoop. Their timing is staggered and spread out. As a result, Jeffers said that wildlife biologists working on wetlands restoration, as part of a grant from the National Fish and Wildlife Foundation and secured by the National Audubon Society, have increased their survey intensity. Now, wildlife managers and volunteers are conducting three surveys each season across the valley.

“You’re having different populations” come through, Jeffers said. “So you'll have Dowitcher’s roll in, and they'll stay for a few weeks and then they're gone. And then they'll come back in the fall.”

The Lahontan Valley Wetlands sit at the end of the Carson River. Before any dams, ditches and diversions were built in the valley, the river traveled a meandering course, carving out wetlands throughout the area. Goddard said the Carson River, left to its natural flows, can be “described as a fire hose on a concrete floor,” whipping around and changing direction in a dramatic way.

But in the early 1900s, the U.S. Bureau of Reclamation constructed the Newlands Project, one of the federal government’s first efforts to irrigate the arid West with large-scale infrastructure to build storage reservoirs, prevent flooding and redirect rivers. The project brought together two rivers: the Carson River and the Truckee River. The Carson was impounded at Lahontan Dam, and the Truckee was redirected toward the Fallon agriculture through a canal at the Derby Dam.

The project, by combining the Carson’s flows with water from the Truckee, brought more water to Fallon and the Lahontan Valley — for a time. Yet that extra water came with significant costs on the other end of the system. By diverting the Truckee River, the Newlands Project helped to dry up Winnemucca Lake, itself a wildlife refuge, and caused severe declines at Pyramid Lake, the river’s terminus, critical fish habitat and a spiritual center for the Pyramid Lake Paiute Tribe.

In the 1970s, damage at Pyramid Lake had devastated the Lahontan cutthroat trout and the cui-ui, where the name for members of the Pyramid Lake band of the Northern Paiute (“cuiyui ticutta,” or cui-ui eaters) originates. The government stepped in to bring water back to Pyramid Lake. In 1990, Congress passed a settlement and a framework for moving forward on the rivers.

As more water was redirected back to Pyramid Lake, less water was coming into the Lahontan Valley Wetlands and the larger Fallon area. Goddard said wetland “flows dried up dramatically.”

Yet, he noted, the 1990 settlement act was not blind to this consequence, or unprepared. The act created the framework for a program to purchase water rights from willing sellers within the Newlands Project — with a goal of sustaining 25,000 acres of wetlands in the Lahontan Valley.

Since then, the state of Nevada, the Nevada Waterfowl Association, the Bureau of Indian Affairs and the U.S. Fish and Wildlife Service have acquired 49,040 acre-feet of water (an acre-foot is the amount of water needed to fill one acre to a depth of one foot). The majority of that water — 38,340 acre-feet — is managed by the wildlife service for the Stillwater National Wildlife Refuge.

Even so, drought remains a large challenge for getting the water to the wetlands. In dry years, a portion of those water rights can be curtailed as water deliveries are cut by the irrigation district.

“When we’re drawn down like this, there’s less of the habitat than we would like to provide,” said Carl Lunderstadt, who serves as the manager for the Stillwater National Wildlife Refuge. “But it makes the location all the more critical because there’s drought all over the West.”

This part of Western Nevada continues to be formed and shaped by water — and at one point in geologic time, there was a lot more of it. Standing on an unpaved road at the refuge and looking for shorebirds with Lahontan Audubon Society volunteers Rose Strickland and Dennis Ghiglieri, we could see the shorelines of ancient Lake Lahontan imprinted into the mountainside.

Today, Ghiglieri said, "they are basically the largest and only wetlands left in Western Nevada.”

The wetlands serve not only as critical habitat for shorebirds, but also as a spot for avid birders. Strickland’s interest in birding came from taking a UNR ornithology course — as she describes it, “the best college course I ever took.” Not only did she learn about birds, she recalls going on field trips and coming away learning about their habitat and the environment in the Great Basin.

“Wetlands are always an excellent place to look for birds,” she said.

As for identifying birds, that can be a more challenging task. Strickland, who also serves on the Lahontan Audubon Society board, said she went out twice in the spring for training sessions.

“That was the tricky part,” Strickland said. “If the sky is filled with birds, how do you pick out the shorebirds you are interested in? But we had excellent training and felt comfortable doing that.”

Creating and expanding new wetland habitat is not an easy or fast process, Goddard added, but it’s a task that could prove essential to recover declining shorebird species in the Great Basin. It took more than three decades for the federal government to transfer ownership of Carson Lake and Pasture to the state, something that was spelled out in the 1990 settlement act. But having the two segments of the valley wetlands work together could be beneficial. The two areas have different habitats. Carson Lake has more flooded pasture compared to Stillwater’s mud ponds.

State officials are beginning the process of drafting a management plan aimed at improving bird habitat at Carson Lake and Pasture. Jeffers says that getting the state’s roughly 7,000 acre-feet of water to the area can be a balancing act with timing during the irrigation season and staying carefully attuned to wetland depth and temperature — too hot, and birds are at risk to disease.

The management plan will consider a number of other factors, including where to improve water delivery infrastructure and where to allow for livestock grazing, which is permitted in the area.

This work, Jeffers said, is part of a global effort to maintain shorebirds, species that connect us across the Earth. These birds migrate awe-inspiring lengths, from the Arctic and back again. On the way, long-haulers rely on wetlands and water sources in the Great Basin and elsewhere.

“They make these huge movements, and they depend on a variety of wetlands habitat along the way, from Alaska to Panama,” she said. “The Lahontan Valley Wetlands provides really critical replenishment of fat reserves for these long-range migrants. Without this, populations could greatly be reduced. We have a responsibility to provide this for them as they migrate through.”

Update: This story was updated on Sept. 27 at 9:47 a.m. to include more information about the National Fish and Wildlife Foundation grant.