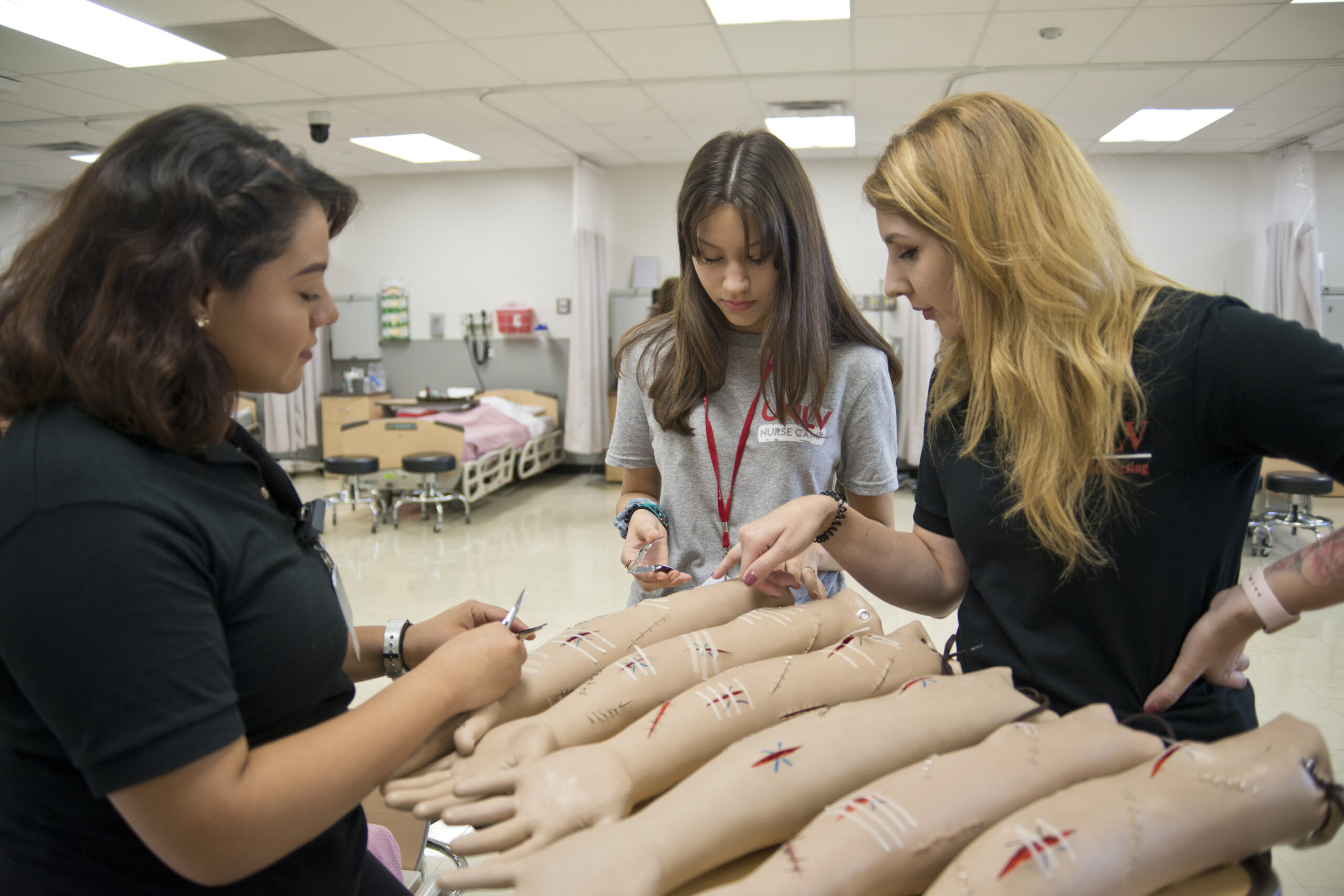 Inside a makeshift hospital room, a group of students learns how to gown and “glove up” before they go into an isolation room. Some then practice how to administer CPR, ensuring that the depth of their chest compressions is on target. Others use an ultrasound training device to look at dummy livers and kidneys inside a manikin.

For the first time, UNLV hosted a week-long nursing camp for 30 high school juniors, seniors and recent graduates to show them the ins and outs of a career in nursing. It’s part of the school’s effort to address the state’s health-care workforce shortages. Roughly 980,000 Nevadans live in a Primary Care Health Professional Shortage Area, meaning they face barriers in access to routine preventative care services that could keep them healthy and out of the hospital.

The first day of the nurse camp began with a CPR and first-aid training session and a Stop the Bleed course. Other days included a tour of UMC and an opportunity to shadow working nurses and UNLV student nurses.

Mary Bondmass, the associate dean of faculty at UNLV’s School of Nursing, said her goal for the camp is to encourage young students interested in the health field to stay in Nevada in order to complete their higher education.

“We have to give them the bug, because nursing isn’t for everybody, and give them the skills they need to be good nurses,” she said.

Bondmass, who ran the CPR station on Thursday, said her favorite part of the camp was seeing the “lightbulb moment when the students finally realize they’re doing it right.”

The participating students hailed from a variety of backgrounds and had varying degrees of interest in nursing coming into the camp. One of them, Anna Cosby, a freshman at UNLV, said she has several family members in the field and has known she wants to be a nurse her whole life. She said she had already gained so much knowledge and appreciated the staff’s willingness to answer any questions she had.

Victoria Tarango, a senior from Rancho High School, said she originally wanted to be a neurosurgeon, but now she’s considering nursing.

“You get to have a great relationship with all your patients and help save lives, but also have a life of your own,” Tarango said, adding that it’s “important to love what you do, but also have things you’re passionate about outside your job.” (For Tarango, that’s boxing.)

Other students said they were open to the prospect of a career in nursing, but hadn’t set their sights firmly on the medical field. Troy Corbin, a senior at College of Southern Nevada High School, said that nursing “has always seemed cool” but that he hadn’t ever seriously thought about it as a career. After a few days of the camp though, Corbin said he had already learned so much and is very interested in nursing now.

UNLV faculty are excited about what the nursing camp could mean for the school’s future, particularly in light of the fact that the School of Nursing is planning to expand its undergraduate program starting in the fall to 216 students annually spread across three cohorts, which represents a 50 percent increase since the fall of 2017.

Tricia Gatlin, an associate dean at the nursing school, touted the program’s success in placing students immediately into jobs. She said the school has a 100 percent job placement rate for its students within three to four months of graduation.

Gatlin acknowledged that one school can’t fully solve the state’s health-care workforce shortage, but said that “by having prepared and qualified nurses, we can make a big difference in our community.”