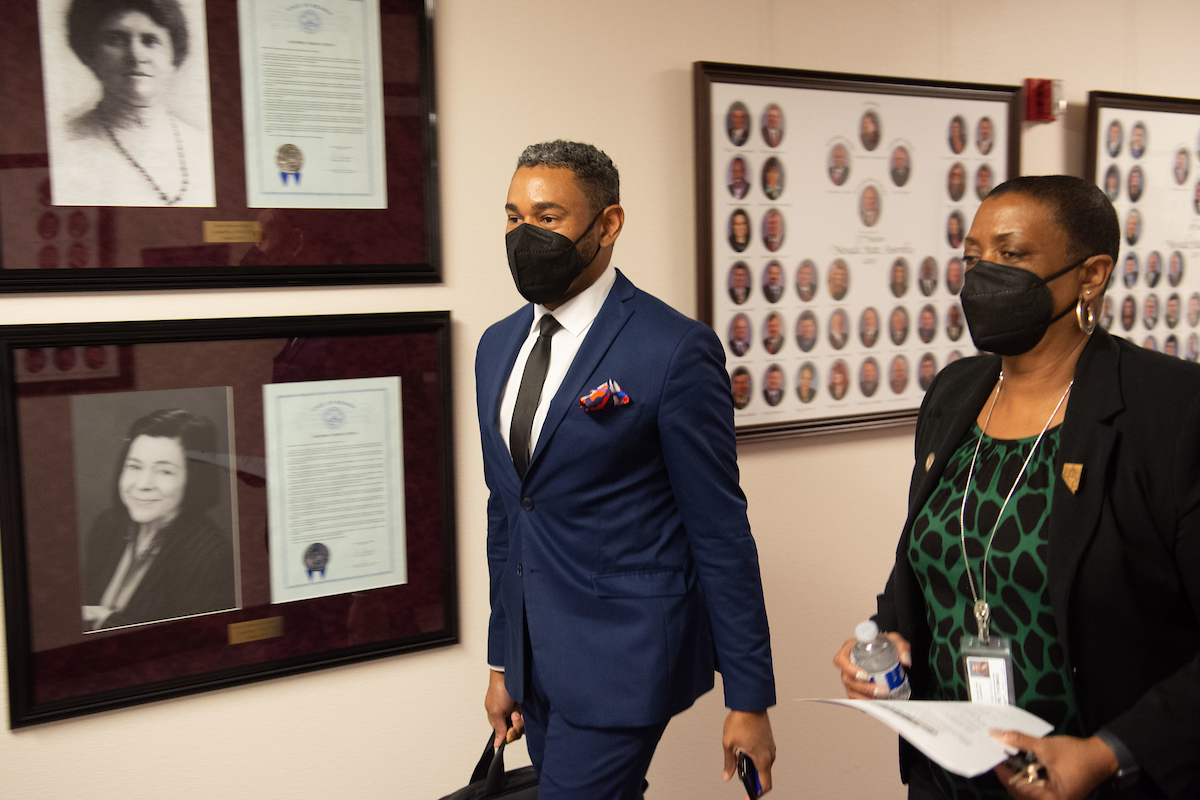 After more than 13 years as president of the Urban Chamber of Commerce, Ken Evans is handing a younger generation of leaders the reins of the organization dedicated to the success of Southern Nevada’s Black business community.

Chamber members celebrated the appointment of Democratic Assemblyman Cameron “C.H.” Miller, 42, at the Classic Jewel downtown lounge and bar earlier this month. Evans, 60, said the change was important for keeping the momentum of the organization, which is a business resource hub located in the Historic Westside that provides workshops, roundtable discussions and summits to help locals thrive as business owners.

“​​I'm excited about [passing the torch] because I'm a big believer that you come in, you do what you can do, and then you hand the torch off to someone else to take it to another level,” Evans said at the event, which drew a crowd that included top Black executives and leaders in the state, from industries such as mining, energy, criminal justice and hospitality.

Evans said he is looking forward to Miller connecting with current members of the organization and building up next-generation business owners and aspiring entrepreneurs who can contribute to the “economic development in Southern Nevada, nationally and globally.”

“The chamber has done a lot of great things in getting us to this point,” Miller said. “And so I'm looking forward to just literally standing on their shoulders, and reaching as far as I can reach.”

Miller, a second-term Democrat in the Assembly, plans to lead the bipartisan organization while serving through the legislative session this spring.

He said despite his move to Northern Nevada for more than 100 days, a great team and solid vision will provide success in his first year.

“They can expect to continue to be supported,” Miller said about members of the Chamber. “And [expect] me to find new ways to help the business community thrive.”

The leadership change comes after the building where the Urban Chamber is located was donated to the organization's nonprofit arm by the city of Las Vegas last month.

Miller said he will start his service as president and CEO with an audit to decide what needs to change, what needs to stay and what can end at the Urban Chamber of Commerce.

“Whenever you have a changing of the guard, if you will, in my opinion, it requires a thorough understanding and evaluation of what's happening right now,” he said.

Miller said after that evaluation, members can expect “new things with a new spin and a new twist.”

Miller and Evans said the transition to a younger generation of leaders is not only reflected in the new president and CEO. The executive board is now a majority of “next-gen” leaders that includes civil rights attorneys, mental health professionals and engineers.

Using the assassination of Martin Luther King Jr. as an example of a lapse in leadership for Black baby boomers, Evans said it is important to intentionally position younger Black leaders early on to keep economic growth steady.

“He was slipping into an economic development agenda,” Evans said about King. “And he was trying to get America to pay attention to the fact that, what good is it for you to have the right to sit at the lunch counter if you don't have the money to pay for your meal?”

He said King’s death not only devastated the Black community but that it felt as if his generation had lost almost 50 years of progress.

Structural and systematic racism has kept millions of African Americans in a cycle of multigenerational poverty. According to Gabriel Zucman, an economist at the University of California Berkeley, Black Americans’ average wealth has remained around 15 percent of that of white Americans since the mid-1960s.

“So from our standpoint at the Chamber,” Evans said, “We say, we can't afford to have another 50-year collapse.”