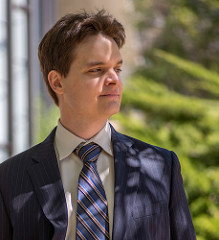 When David first registered to vote in 1998, it was as a Libertarian. He didn’t like telling others what to do (and he definitely didn’t like others telling him what to do), so it seemed like the right move at the time. Though his address has changed a time or two since then, his party affiliation hasn’t — and he has been a tireless evangelist for Libertarian causes ever since.

Professionally, following more than a decade of information technology (IT) experience, David works as an IT Disaster Recovery specialist. He has provided IT services for a variety of entities through the years, including governments, non-profits, a for-profit college, various dentists, numerous lawyers, credit card processors and more.

David was raised in Torrance, CA, then moved to Pahrump for high school and has lived in Nevada ever since — though he had the good sense to get out of the Southern Nevada heat and attain his B.S. in Computer Science from the University of Nevada, Reno. He has two sons, Brian and Aiden, and enjoys long hikes and drives in the Nevada wilderness (though he freely admits he’s better built for driving than hiking). He also finds listening to the IndyMatters podcast a refreshing way to get through his commute from Sparks to Carson City each day.