Indy Explains: What is the tip allocation rate and why is the Culinary Union protesting it? 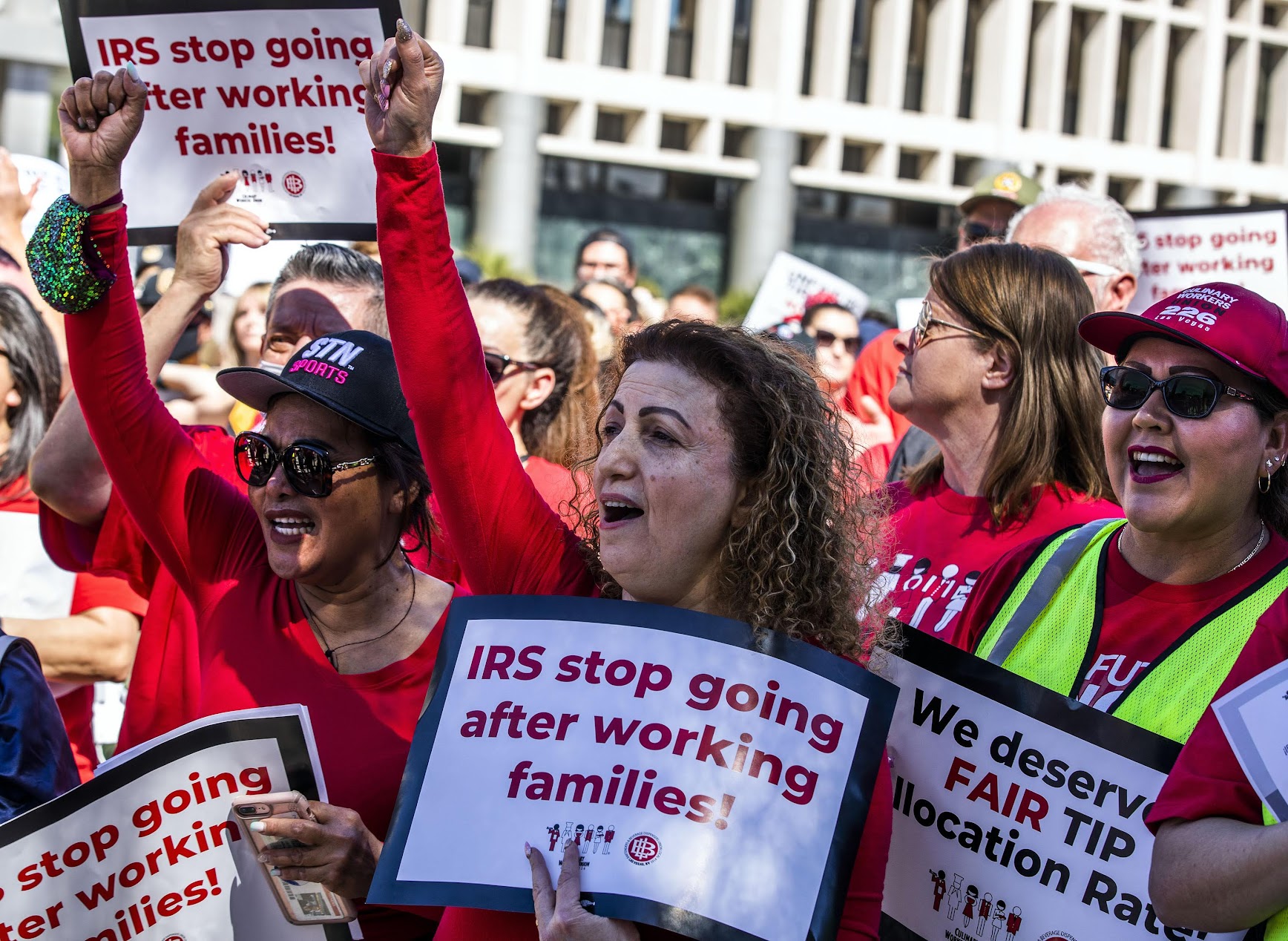 Tips play a big role in compensating many of Las Vegas' hospitality workers — from cocktail servers to bellhops to valet parkers — and how tips are taxed is at the center of an ongoing outcry from the Culinary Union.

In 2020, the IRS — the federal agency charged with collecting taxes — lowered what’s called the tip allocation rate to compensate for the lack of open hospitality business during the thick of the pandemic. The rate defines what workers would be reasonably expected to make from tips — and the IRS then taxes them accordingly.

Nearly two years later, the IRS has increased tip allocation rates by anywhere from 50 percent to 60 percent higher than pre-pandemic, which in turn increased taxes on income for hospitality workers, leading to hefty cuts in take-home pay and even some paychecks with a balance of zero, union workers say.

In February, hundreds of union workers rallied in downtown Las Vegas, calling the higher rates unfair and urging the IRS to include the union when negotiating such agreements, as it had in previous years. “Shame on you,” the crowd chanted, while holding signs demanding a fair rate.

Casino workers are just bouncing back from pandemic-related business closures, yet some 10,000 people in the industry have not gone back to their jobs. They face high inflation and a sharp rise in the cost of living, including substantially higher gasoline and housing prices, according to Ted Pappageorge, the Culinary Union’s secretary and treasurer.

In March, Nevada Sens. Jacky Rosen and Catherine Cortez Masto called on the IRS to meet with the Culinary Union and its workers to hear their concerns about the increase.

The IRS offers employers several methods for tip allocations. This story will mainly be referring to the Tip Rate Determination Agreement (TRDA) and the Gaming Industry Tip Compliance Agreement (GITCA), which both require the IRS to work with the employers to arrive at a tip rate and require 75 percent employee participation.

What is the tip allocation rate agreement?

Tip allocation rates are voluntary agreements between the IRS and employers where tipping is customary — such as the restaurant industry and casinos. The rates, which differ among employers, positions and shifts, are calculated from data provided by companies such that the IRS can project the amount of tips workers are likely to make in an hour.

“[The IRS says] ‘We'll look at every single job in Las Vegas, every single shift … and identify separate and unique rates of what we think you would make in tips,” Pappageorge explained. “And if you agree to our rates, then you agree to pay taxes on the rate, and we will agree to not audit you … but we think they have made an overreach.”

According to the IRS website, the agreement is used to determine how to distribute tips to employees, which can ensure that employees earn minimum wage and encourage tax compliance by potentially making reporting income and tips simpler for employers. All cash and non-cash tips received by an employee are considered income and, thus, are subject to federal income taxes.

The agreements are also voluntary for employees — workers can opt out of the tip allocation rate agreement but then must keep track of their tips or risk an audit.

“It's common for folks to opt out. It's an individual process … Each person would have that decision to make,” Pappageorge said. “But we have explained to the industry and it's important that people are secure and do their taxes. And people are willing to pay their fair share of taxes.”

How does it work?

While many customers are used to tipping their waiter 15 to 25 percent, the IRS assumes an average tip rate of 8 percent. The government agency expects employees to report tips that amount to at least 8 percent of their gross food and drink sales, according to the IRS website, and split the tips between the public-facing employees and those in the back.

UNLV tax law professor Francine Lipman gave this example: If a restaurant earns $5,000 in a pay period, 8 percent of its sales is $400. If the restaurant's indirectly tipped employees (people such as bussers and cooks who receive tips from tip-sharing rather than from customers) receive $100 in tips, the share of 8 percent of sales that directly tipped employees should receive is $300.

But, lately, some Culinary members have said the dollar amounts on their checks have seen a dramatic decrease. Aretha Wilder, who has been a cocktail server at the Flamingo for 31 years, said her first check after the new tip allocation rate was established showed she made $471 for 80 hours of work, when in 2019 she would have made more than $800.

“What happens is, the tips you make do not go on your paycheck, but the taxes for your tips come out of the paycheck … So if you're on your hourly rate and you're paying the taxes on your tips, that leaves little left in your paycheck,” Pappageorge explained. “And there's no arguing that people should pay taxes on their income. The problem is that the IRS made … new rates higher than they were pre-COVID.”

Pappageorge said that the rates are appropriate for some employees, but for others who are still catching up, it is unfair and “they went too far.”

“The problem is that [IRS officials] have moved too quickly. Other industries are back to work, but that's not happening here and it's still quite volatile. So we need to get a better look at these rates,” Pappageorge said.

Where do the negotiations stand?

According to the tip rate determination agreement, the IRS will usually review the tip rates only once a year, and either the employer or the employees can request a lower rate by filing a petition with the IRS. The current rate agreement is for three years, Pappageorge said.

Because the tip allocation rate increase also affects how tipped workers are taxed, Pappageorge argues that the IRS is breaking President Joe Biden’s promise of no new taxes for people making less than $400,000 a year.

In previous negotiation years, the Culinary Union and workers have participated in the process along with their employers or the Nevada Resort Association because of “joint interest in making sure that workers are fairly taxed,” Pappageorge said. This time around, only the IRS and employers came to the agreement.

The IRS rate agreements increased nationwide, but the Culinary Union has not heard the same complaints from other hospitality worker unions around the country, Pappageorge said. They have also not heard from IRS officials in response to their concerns.

“These are average workers that work here in Las Vegas. They have good jobs and their taxes have been jacked up. And we think that this is the absolute wrong time to jack up taxes on working families,” Pappageorge told The Nevada Independent. “So we want the IRS to do what the president said.”

Ideally, Pappageorge said the current rates should be lowered to what they were in 2019 and gradually increase during the agreement period to ease the blow and give time for the economy to get back to “normalcy.”