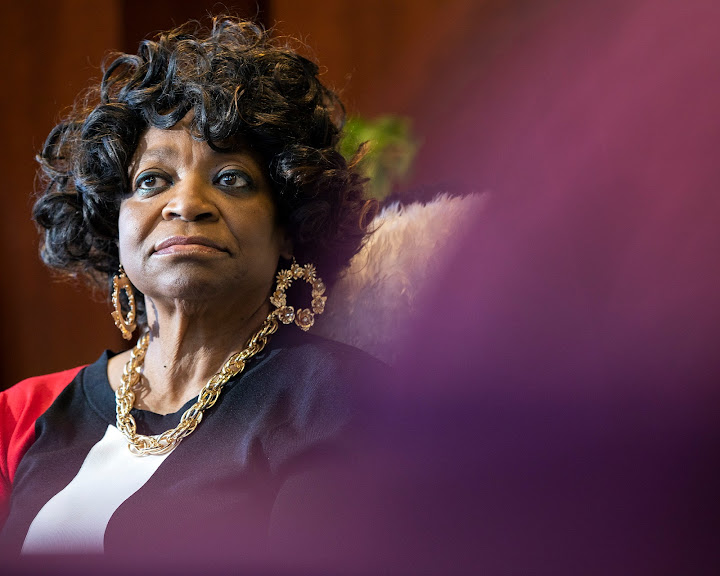 For more than 20 years, Judge Johnnie Rawlinson has served on the 9th Circuit Court of Appeals as not only the first but, for most of that time, also the only African American woman on that court. Now, the longtime judge says she may be ready to step back and take so-called senior status — but only if Nevada’s two U.S. senators back her preferred replacement.

Her pick: Berna Rhodes-Ford, a former clerk for Rawlinson, a lawyer for more than two decades — and the wife of Democratic Nevada Attorney General Aaron Ford.

“I could do this job for another 20 years without hardship, God willing,” Rawlinson, 69, said in an interview. “I don't have any health issues, I don't have any impediments to doing this job. But I am cognizant of the fact that the torch needs to be passed at some point, and I think this is the opportune time.”

Rawlinson was confirmed to the seat in 2000 in a historic appointment under President Bill Clinton and at the recommendation of former Sen. Harry Reid (D-NV). Now, Rawlinson said, the opportunity to endorse her successor presents an opportunity to preserve the “legacy” of judicial appointments spurred by Reid, especially efforts to expand the diversity of the courts.

“I talked to him about a month before he passed away, and he continued to say that he was proud of the fact that he had put me here and I would not want that legacy to be forgotten,” Rawlinson said.

These considerations also come with a possible time crunch, as Democrats eager to populate the federal judiciary with nominees face the likelihood that the party could lose control of the Senate in November, and could hypothetically be locked out of further nominations for the duration of President Joe Biden’s term.

While Rhodes-Ford has signaled interest, her potential nomination has not moved beyond early discussions. No formal process can begin until Rawlinson decides to take senior status, something she has not yet done, and Rhodes-Ford’s name comes with lingering political questions and ethical implications.

Chief among them: Could her marriage to the Democratic attorney general present a conflict of interest, either for her as a jurist on the circuit court, or for the Democrats making the ultimate call on the appointment of Rawlinson’s replacement?

“I think it's unfortunate that people penalize her simply because her husband is successful,” Rawlinson said.

The issue of Brnovich’s relationship to her husband — and his public stances as a politician — has come up in court, including a 2021 case in which executives for a website under scrutiny for prostitution argued her husband’s criticism of sex trafficking affected the fairness of the trial.

A three-judge panel with the 9th Circuit later denied that motion, arguing at the time that Brnovich had not committed a “clear error.”

Rhodes-Ford, who currently serves as the general counsel at Nevada State College (NSC), told The Nevada Independent in an interview Wednesday that it was Rawlinson who initially approached her about the potential for a nomination to the circuit court, a consideration she called “the honor of a lifetime.”

Before taking the job at NSC in 2019, Rhodes-Ford spent more than two decades in labor, employment, corporate and health care law. That includes a stint as the in-house counsel for the occupational health care company Concentra, as well as an "of counsel" position at the firm Holland and Hart and as a partner at the Brown Law Group.

As Rawlinson has thrown Rhodes-Ford’s name into the ring, it remains unclear where the decisions on the federal level — where senators and ultimately the president hold final sway over the process — will go.

Rawlinson said she had already spoken to the White House about her wishes, as well as Sen. Catherine Cortez Masto, the state’s senior senator. She also said she was “in the process” of securing a meeting with Sen. Jacky Rosen, the state’s junior senator.

In a statement sent to The Nevada Independent Wednesday, a spokesperson for Cortez Masto said that both senators “support a diverse judiciary,” and that Cortez Masto “respects [Rawlinson’s] right to serve as long as she desires.”

The statement adds, however, that the senators also established a set of two bipartisan judicial commissions composed of lawyers from across Nevada, meant “to ensure an open, accessible application process for judicial vacancies.”

“Should a Nevada vacancy open up on the Ninth Circuit, Senator Cortez Masto will support the work of the Northern and Southern commissions, which will come together to recommend candidates to the Senators and the White House,” the spokesperson said.

In a separate statement, a spokesperson for Rosen also pointed to the commissions, calling the group a “diverse group of Nevada’s top legal minds” that would recommend potential candidates.

It is unclear precisely how those commissions would be involved should Rhodes-Ford be nominated, in the event Rawlinson does step aside. However, Rawlinson said she believes the commission would “not have as much sway” in this case, as the White House becomes more involved in the nomination of an appellate judge, rather than it is with appointments for a district court judge.

Rawlinson also said that she had “some concerns” about the commissions overall.

“I think those commissions sometimes have the tendency to perpetuate themselves,” Rawlinson said. “And by that I mean the people — they seem to gravitate toward people who've gone to the same schools they've gone to, who’ve had the same experiences they've had, and sometimes that leads to a lack of diversity.”

Rhodes-Ford, when asked about the federal implications of a nomination to the appellate court, said she respects “the wishes of the senators and the wishes of the president, and [I] understand that it is their decision.”

“I just hope that they will give me due consideration,” Rhodes-Ford said.

It was then-Senate Majority Leader Harry Reid who pushed in 2013 for the “nuclear option” — killing the 60-vote filibuster for such nominations — after Republicans blocked 30 judicial nominations to that point under President Barack Obama.

Today, grim economic headwinds and low presidential approval ratings have created new electoral concerns for a Democratic Party with a razor-thin edge in the U.S. Senate. Should control flip to Republicans, it remains unclear how Democrats may reach the 50-vote threshold needed to confirm judicial nominees.

Reporter Humberto Sanchez contributed to this report from Washington, D.C.