Activity ramps up for finding Clark County's next superintendent, a process that could prove challenging

Some equate it to finding a magician. Others call it Nevada’s most important leadership decision short of the governor’s race this year.

It’s also the reason several dozen emails — each containing some sort of advice or recommendation — have landed in Linda Cavazos’ inbox the last few months from various community members and organizations. She sits on the Clark County School Board of Trustees, the seven-member group charged with selecting the district’s next superintendent. The arguably monumental task is upon the board again following Superintendent Pat Skorkowsky’s announcement last year that he would retire in June.

And if Cavazos’ inbox and cell phone are any indication, the community has a lot to say about what kind of leader the nation’s fifth-largest school district needs moving forward.

“I don’t even count the texts anymore,” she said.

The trustees’ work kicks into high gear this week as Skorkowsky’s departure inches ever closer. The board meets with Ray and Associates, the Iowa-based firm hired to conduct a national search, on Wednesday for the first substantive, public discussion about the process. On the menu: Establishing a timeline for the search, determining how to solicit public input and discussing compensation and benefits for the new district leader.

It’s a critical step in the journey to find the next man or woman who will shepherd a school district that has more than 320,000 students but also a bevy of academic and financial challenges.

The Clark County School District just wrapped up budget cuts to overcome a roughly $60 million deficit — an unwelcome distraction on top of an already-busy year. The district is moving to a new operating model designed to empower decision-making at the school level. The state-mandated reorganization met resistance from school officials and trustees last year, triggering a rocky rollout that heightened tensions among state and local education leaders. Later, the budget turmoil created a rift between Skorkowsky and a couple of trustees, which played out in public settings as they sorted out the finances.

Suffice to say, school officials and community education partners agree on at least one matter: The next superintendent must be someone who can successfully navigate a road that’s more bumpy than smooth toward a system that delivers a quality education to all students, regardless of ZIP code.

Cavazos, the newest board member, said she’s up for the challenge of finding that perfect person — whether it be an internal or external candidate.

“I do feel optimistic,” she said. “I want to get someone who is excited about coming here and wants to be here.” 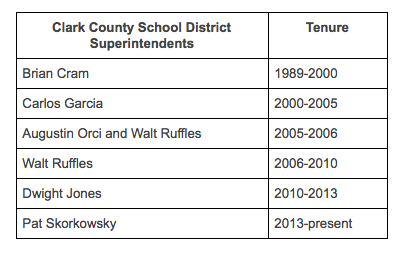 If a tentative timeline circulated at an education meeting last month pans out, the top candidates could be presented to the board in March. But that hasn’t stopped speculation about who may wind up on that list.

An insider or an outsider? A teacher-turned-administrator or a business-oriented person?

Board President Deanna Wright said she has heard chatter about whom people want to see succeed Skorkowsky but insists that’s all it is — chatter. Among the names she said she has overheard drifting through the rumor mill:

Wright said she’s not pushing any particular person. She wants the process to occur naturally and transparently, with the best candidates rising to the top for final consideration.

“It’s important we go through this process with a really open mind,” she said.

White, Martinez and Carranza did not respond to inquiries from The Nevada Independent asking whether they’re interested in the position.

Geihs, in a phone interview, said he’s not making any decisions until after he sees the candidate criteria decided upon by the board. In the meantime, other school districts have approached him about opportunities, he said.

“I’m considering those options as well,” Geihs said. “We’ll see where Clark County falls in that and if it is even a viable option. I just don’t know whether it is yet.”

He’s not the only internal candidate mulling a bid for the district’s top job. Mike Barton, Clark County’s chief academic officer, echoed his colleague’s stance: He is waiting to see what qualities and experience the board wants in the next superintendent before throwing his name in the ring. But Barton acknowledged interest in the possibility.

“The longer you stay in a system and work with people to do this work, you feel like you’re responsible for improvement,” he said in a phone interview.

What kind of leader is best?

Whoever lands the gig comes at a critical juncture in the school district’s history.

The massive decentralization effort is well underway but also far from complete. The district hasn’t achieved a key component of that mandate, which is transferring 80 percent of unrestricted funds to the school level as required by law. And then there’s the cultural piece — creating an environment where parents, teachers and principals feel empowered to make budget-related decisions that they think will best serve students.

On top of that, the district needs to rebuild its meager financial reserves and continue improving student learning. Clark County is the largest school — by a landslide — in Nevada, which continually falls toward the bottom of state rankings in terms of education funding and outcomes. Graduation rates, however, are on the rise both statewide and in Clark County.

“I think it’s going to take someone of heroic proportions to come in here and turn this school district around,” said Stephen Augspurger, executive director of the administrators’ union. “That’s not going to happen overnight.”

To help find that person, the district is shelling out roughly $43,000 for the search firm. That doesn’t necessarily mean the chosen candidate will come from elsewhere; after all, Skorkowsky spent his career in the district, starting as a teacher before ascending the ranks to the top leadership role.

Education leaders and organizations surveyed by The Nevada Independent generally didn’t indicate a preference about whether an outsider with a fresh perspective or an insider with institutional knowledge would be the best fit for the job.

Instead, many described the ideal new superintendent as someone who can blend educational expertise with financial skills and has the ability to connect and build relationships with staff, lawmakers, community business leaders and parents who come from diverse ethnic and socioeconomic backgrounds. (Roughly 46 percent of the district’s students are Hispanic and another 14 percent are black.)

Educate Nevada Now, an advocacy organization for classroom equity, wants to see someone determined to boost academic achievement among students who are learning English or living in poverty, said Sylvia Lazos, the organization’s policy director.

“I think the system really has to pivot to paying better attention to the equity issues we face because that’s how you lift Clark County,” she said. “We can’t continue to give a lot of attention and a lot of money to schools that are already doing well.”

Others are calling for a candidate who has deep financial prowess. Their argument: The school district is one of the state’s largest employers and has a $2.4 billion budget.

“We need a leader that has an understanding of how to manage a large organization like this and, if he or she doesn’t have that skill, they know the types of people to hire so that the district can be better managed,” Glenn Christenson, who chaired a reorganization-related council, told a legislative committee last month.

Christenson, a former Station Casinos executive, has long advocated for more synergy between the business community and school system and warned that not including the former in the selection process would be a mistake.

It’s unclear to what extent the business community will be involved in the process. The board, however, is planning public input meetings.

Still, the board president isn’t convinced the next superintendent must be someone who hails from the business world.

The search is capturing the attention of many organizations, including one that’s more focused on bringing charter schools — public schools that operate under a performance contract issued by a public entity — into Southern Nevada’s education ecosystem. Jana Wilcox Lavin, the executive director of Opportunity 180, said she’s eager to hear what vision parents, community members and other nonprofits have for the school district. That conversation, she said, should guide the selection process.

“To me, it’s more about leadership than it is about a unicorn with a certain set of skills,” she said.

The circumstances — an in-progress reorganization paired with financial and academic challenges — raise the question: Does the right candidate even exist?

The president of Nevada Succeeds, which focuses heavily on teacher quality as the pathway toward improving education, thinks so. But Brent Husson finds it difficult to fathom an outsider being able to jump into the complex situation and emerge victorious.

“I don’t see how an external candidate would be able to get up to speed in a timely manner,” he said, referring to the reorganization. “It’s not like they can avoid it. It’s the law.”

The money and politics factors

Attracting the right candidate may come down to money.

The median base salary for superintendents in large school districts — defined as those with more than 25,000 students — was $229,000 for men and $225,000 for women in the 2016-2017 academic year, according to the School Superintendents Association. Salaries on the top end of that spectrum were in the high-$300,000 range.

Skorkowsky was hired with a $260,000 annual salary, not counting benefits, in 2013. Raises given to administrators during Skorkowsky’s tenure have pushed his salary closer to $280,000.

“I think we’re not going to get that many great candidates because of what we pay,” he said. “It’s pretty hard.”

The board anticipates tackling the compensation issue during the Wednesday meeting. The conversation could generate considerable debate given the recent budget cuts and layoffs.

More important than pay, Garvey said, is finding a leader who will push back when lawmakers introduce bills or initiatives that put a squeeze on the district’s already-tight finances. She fears any arbitration victories for the unions negotiating contracts right now could trigger even more budget cuts given the fiscal situation.

“I want someone who is going to say, ‘That doesn’t make sense,’” Garvey said.

Board members say they’re committed to seeing the reorganization through, but trustees’ initial resistance has sown fear in some local education officials. John Vellardita, who heads the powerful teachers’ union, said the district needs a “change agent” who’s willing to embrace the reorganization — not someone bent on undoing or ignoring it.

“What we don’t want is a retread of superintendents from different school districts that are part of a model that we just left — top-down, highly bureaucratic, not acclimated to empowering stakeholders,” he said.

Vellardita said qualified and interested candidates should view the opportunity as a “risk moment” that could change the face of public education in Nevada.

Whether the selection process unfolds in a fair and transparent manner, as trustees and other community members have called for, remains to be seen. Several education leaders voiced concerns about inevitable behind-the-scenes jockeying as stakeholders maneuver to see their desired candidate land the all-important job.

“We shouldn’t kid ourselves,” Vellardita said. “There’s a policy discussion that should take place to determine the next leader, but we also know there will be a political discussion and decision made.”

Members of a parent group are keeping their fingers crossed for a transparent process and, ultimately, a new leader who arrives with no strings attached, said Anna Slighting, a Hope for Nevada board member.

“This needs to be someone who is coming to us clean, who will do the right thing because it’s the right thing to do and not because they’re beholden to any organization,” she said.

Clark County won’t be the only large school district undergoing a leadership transition in the near future. The chancellor of New York City’s schools announced her retirement last month, and Chicago Public School’s chief recently resigned amid an ethics probe.

Disclosure: Station Casinos has donated to The Nevada Independent. You can see a full list of donors here.
SHARE