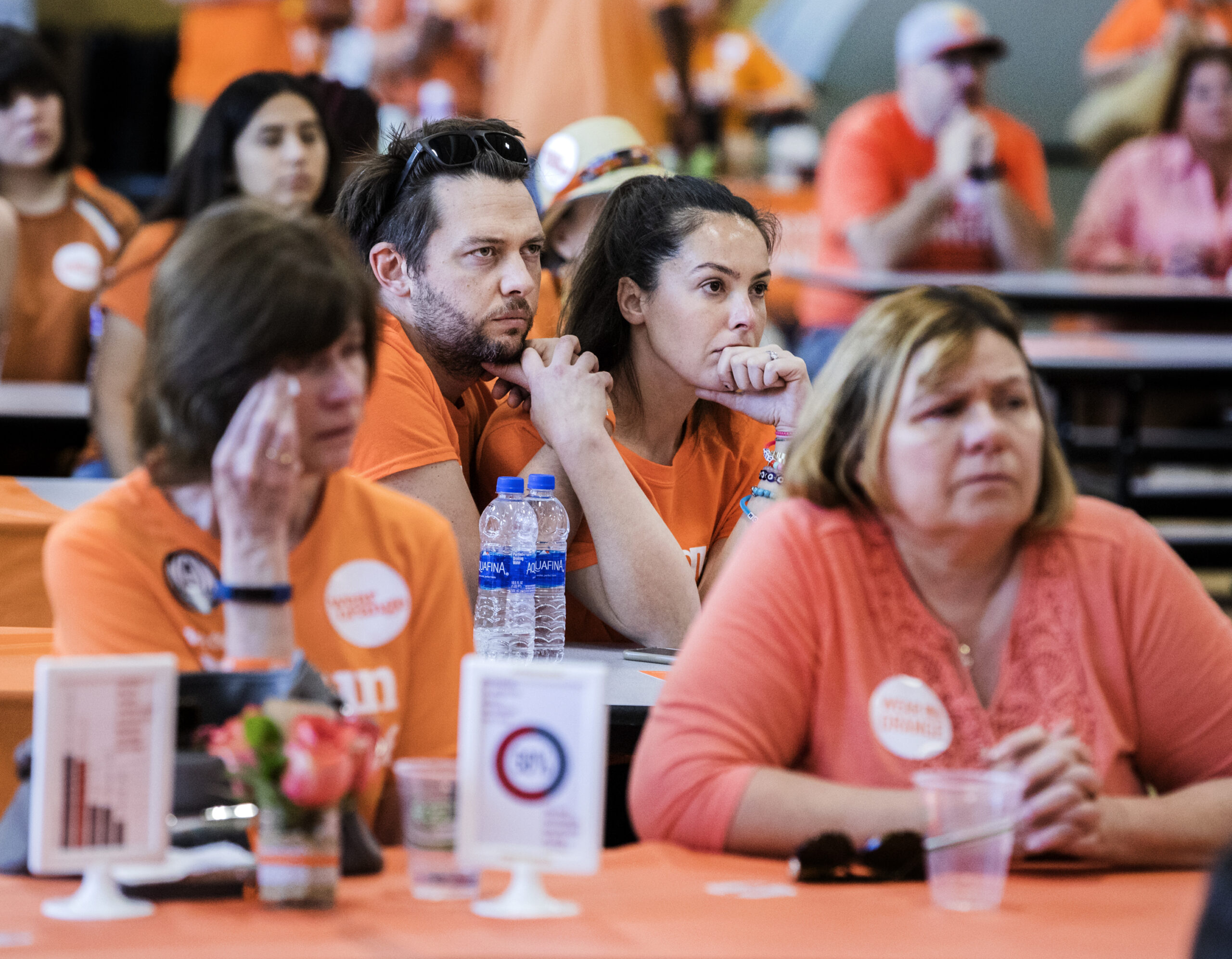 They were there when Vermont Sen. Bernie Sanders rallied seniors in Henderson and again when California Sen. Kamala Harris visited a West Las Vegas community center, and they snagged front row seats to hear another Golden State politician, Rep. Eric Swalwell, speak inside a mosque.

Women, along with some men and teens, wearing fire-engine red T-shirts have made it their mission to attend campaign events any time a presidential candidate comes to town. They’re members of Moms Demand Action for Gun Sense in America or a related student group, both of which are bent on making gun violence prevention a centerpiece issue in the 2020 election cycle.

“At least someone involved has been to every single one,” said Elizabeth Becker, communications director for Nevada Moms Demand Action, referring to candidate visits. “We don’t want to miss anyone.”

Leaders say the grassroots-style, all-volunteer organization has grown rapidly the last few years in Nevada, fueled by increasing distress over gun violence and the Las Vegas Strip mass shooting. Nevada’s firearm mortality rate —16.7 deaths per 100,000 people in 2017 — exceeds the 12.0 national average, according to data from the Centers for Disease Control and Prevention.

The Nevada chapter of Moms Demand Action doesn’t keep a membership roll, but Becker said the organization has groups that meet regularly in Reno, Henderson and Summerlin and is launching a fourth one in North Las Vegas.

Moms Demand Action, which falls under the umbrella of the Michael Bloomberg-funded Everytown for Gun Safety, has nearly 6 million supporters. Bloomberg, a billionaire businessman, is the former mayor of New York City.

“The tide is turning,” Becker said. “Even people who own guns, they want to see background checks.”

But the organization isn’t just about background checks or other policy initiatives supporters describe as common-sense gun laws. It’s also about providing support to people thrust into a community no one voluntarily joins — gun violence survivors.

When Stephanie Pizzoferrato arrived at a Las Vegas hospital eight years ago, she didn’t know bullet fragments were lodged in her 4-year-old daughter’s brain. The little girl had fallen out of the family’s sport-utility vehicle while with her father, grandfather and twin brother on public land, where they were shooting BB guns.

There hadn’t been any noise indicating gunfire. Dayla’s father and grandfather assumed she hit her head on a rock.

But medical staff pulled Pizzoferrato into a closet-sized room halfway through her daughter’s emergency surgery. The injury, they told her, was caused by a bullet.

“It was just not corresponding in my brain,” Pizzoferrato said. “It made no sense. How could this happen?”

Dayla’s father, whom Pizzoferrato was married to at the time, had grown up shooting guns. He was a responsible gun owner, she said, and wanted to teach his children firearm safety.

Authorities later determined, she said, that a stray bullet from a handgun ricocheted twice before striking Dayla. Her daughter died two days later.

As far as Pizzoferrato is concerned, the family’s tragedy illustrates how it only takes one bullet to make a terrible mistake. The shooter was never identified.

“I don’t believe or feel they intentionally did this,” she said. “I don’t think that anyone would want to hurt a 4-year-old little girl out there.”

Three years after Dayla’s death, Pizzoferrato became involved with the Nevada chapter of Moms Demand Action. Earlier this month, she carried a wooden box containing her daughter’s ashes onto a stage at Cheyenne High School and shared her story. Rather than red T-shirts, attendees were sporting orange as part of the Wear Orange movement coinciding with National Gun Violence Awareness Day.

The movement was born out of another tragedy — the death of 15-year-old Hadiya Pendleton in Chicago. She was fatally shot one week after performing in former President Barack Obama’s second inaugural parade in 2013.

Pizzoferrato ran through a list of places where gun violence has ended lives — churches, concerts, movie theaters, schools and office buildings. But she said there are countless other fatal shootings, whether accidental or intentional, that don’t generate as many headlines.

“This has become a national epidemic,” Pizzoferrato said in a room so quiet only the hum of the air conditioning was audible.

Still, Pizzoferrato made clear in a later interview that she doesn’t support taking guns away from people. She simply wants more “common sense” policies such as safe storage laws.

“I understand their purpose to help protect people, keep people safe,” she said. “But I also believe we should be locking up our guns.”

Nevada made some headway in that regard this past legislative session. An omnibus gun bill passed in the final days of the Legislature makes it a misdemeanor penalty to negligently store a firearm in a place where a person has reason to know a child could access it.

The same legislation, Assembly Bill 291, also bans bump stocks and enacts a “red flag” law that allows the temporary seizure of firearms from people deemed a threat to themselves or others.

AB291 wasn’t the only major gun bill passed this session, though. In February, the Democratic-controlled Legislature approved and Gov. Steve Sisolak signed into law a long-stalled measure that will require background checks on almost all private gun sales and transfers. It will take effect next year.

Linda Cavazos, a Clark County school trustee and Moms Demand Action member, said she believes a “red flag” law could have prevented the death of her brother, who killed himself with a gun several decades ago. Cavazos described the group’s purpose as one rooted in raising awareness about gun violence and supporting laws that could reduce it.

“We are not anti-gun,” she said. “We cringe every time that somebody classifies us as gun control because we classify ourselves as gun violence prevention.”

Moms Demand Action, a nonprofit with 501(c)(3) status, does not give money to politicians, although individual members may do so on their own. Its parent group, Everytown for Gun Safety, has a political arm that donated $300,000 to the Nevada State Democratic Party last year, according to campaign finance records.

Similarly, Moms Demand Action does not support any specific candidates or have a national policy platform, said Becker, the spokeswoman for the Nevada chapter. While the group advocates for gun-safety measures and a universal gun background check law, other policy priorities vary by state depending on what exists in each place, she said.

The group also does not support more controversial policies such as creating a gun registry or confiscating weapons, Becker said.

“If something isn’t going to pass in Kansas, then we’re not going to support it in a more liberal state,” she said, describing the group’s philosophy.

On the campaign trail, it’s largely about listening and asking questions. Becker said the Nevada group has asked volunteers to attend candidate events, wear their red T-shirts and ask gun-related questions. The request serves a dual purpose — elevating the topic in campaign discourse and ferreting out where candidates stand on gun policies.

The number of presidential candidates who have released gun-related policy plans, she said, illustrates the growing appetite for the conversation.

In 2017, nearly 40,000 people died from firearm-related injuries in the United States, according to the CDC. That figure includes 508 people in Nevada.

“If there is any way we can reduce the amount of people we are losing to guns each year,” Becker said, “I think we should do it as long as we’re respecting people’s rights.”

For Pizzoferrato, it’s part of keeping her daughter’s memory alive and preventing other families from experiencing similar loss. She already has met with Harris and Massachusetts Sen. Elizabeth Warren. She hopes to meet more presidential candidates.

“We can’t keep doing the same thing,” she said. “It’s not working.”