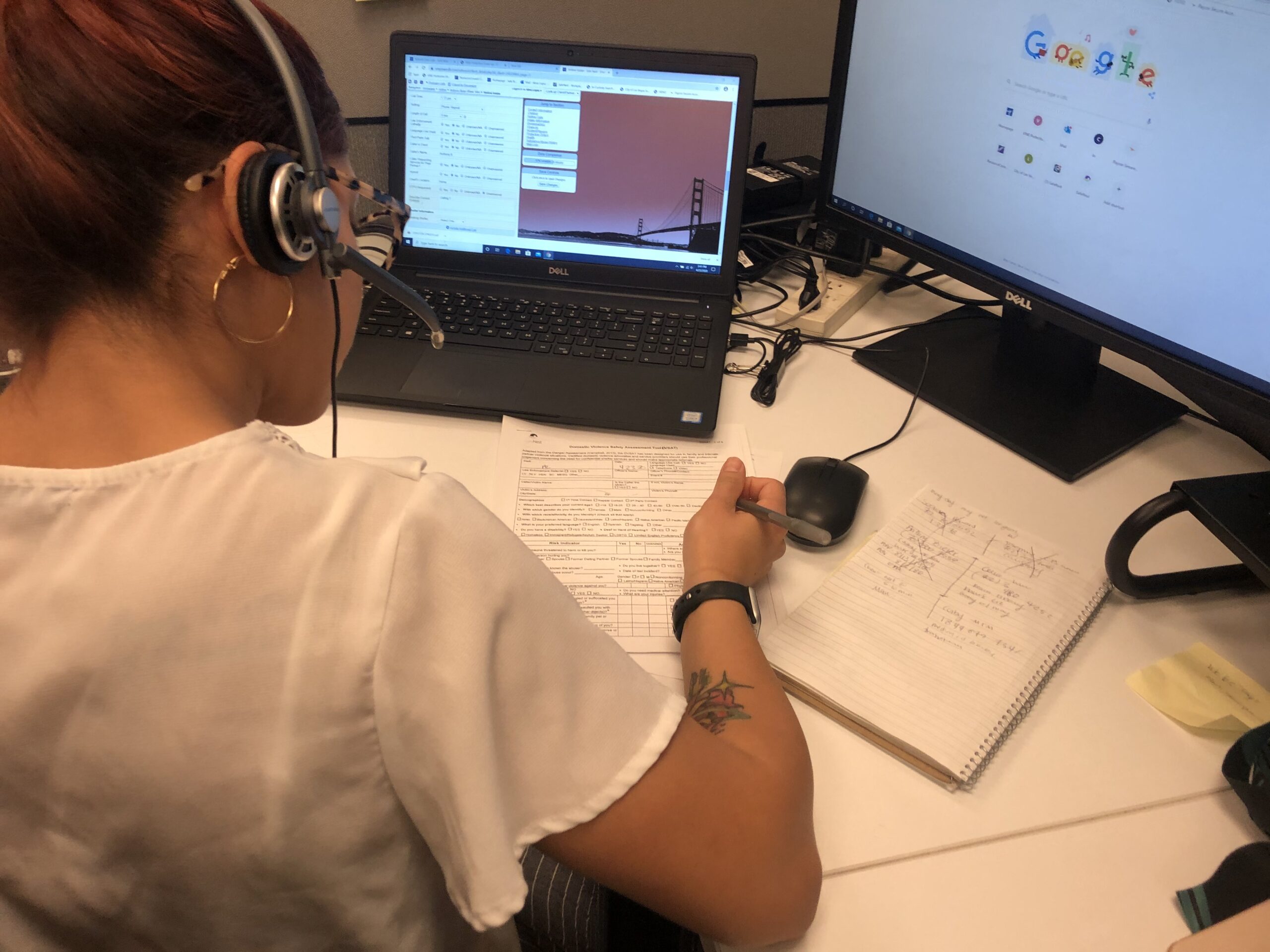 Underneath his face mask, Art Rice’s lips curved upward, forming a smile that could only be seen through the twinkle in his eye.

As a crisis advocate with SafeNest, a domestic violence agency, it’s his job to convey a sense of safety and trust to the people he encounters. On this night, it was a woman and her teenage daughter. They stood next to a pickup truck outside a Las Vegas home. A Metro Police officer sat nearby in his patrol vehicle.

Rice walked gently toward the mother-daughter pair. He asked if he could speak with them. And, like he always does, he “approached the conversation with a smile.”

A short time earlier, two 911 calls had been placed from this residence. An argument had erupted between the woman and her estranged husband, who had invited her over for dinner to discuss their impending divorce. Their daughter was next door at a neighbors’ house. She overheard her father yelling at her mother and then saw him punching her in the head. As the woman tried to grab her cell phone from the pickup truck, he slashed the front tire.

The mother and her daughter both summoned police from their phones. Before officers arrived, though, the husband had disappeared.

Now, it was Rice’s turn to intervene and help empower the domestic violence survivors. He asked how he could help them. Dialogue ensued. A pocket-sized brochure he handed them included, among other things, advice about protection during a crisis:

“Stay away from kitchen, where the abuser has easy access to weapons.'

“Stay away from small spaces like bathrooms or closets, where you can be easily trapped.'

“Get to a room with a door or window for easy escape.'

In this case, the abuser had access to weapons. Rice walked the woman through safety planning. It was the first of five domestic violence-related calls that night in Las Vegas. As frontline health care workers battle COVID-19, there’s another set of first-responders, like Rice, who are waging a fight against another epidemic that has long gripped Nevada — domestic violence. The shelter-in-place orders, crucial for combating an airborne virus, can worsen abuse among couples, family members or roommates.

Metro Police have reported a 12 percent spike in domestic violence calls since the pandemic jolted normal routines and shuttered schools and many businesses. But domestic violence agencies across the state fear that’s just the beginning.

Their trepidation is rooted in history. When the 2008 financial crisis walloped Nevada, domestic violence hotlines lit up with calls. Financial stress, experts say, escalated into verbal and physical abuse.

Back then, Nevada held the not-so-coveted top ranking for its rate of women killed by men (2.96 per 100,000). That’s according to a 2010 Violence Policy Center report, which was based on 2008 data. The Silver State only marginally improved in the decade that followed. The most recent report, based on 2017 data, placed Nevada fourth in the nation.

The report doesn’t reflect the entire scope of domestic violence given its many forms — emotional, sexual, financial and physical to name a few. The crime cuts across gender, ethnicity, age and socioeconomic status, too.

Metro Police responded to nearly 71,000 domestic violence calls in 2018. SafeNest leaders say that figure does not represent the total number of incidents annually. Many go unreported.

“It was scary, but we’re adding multiple, multiple levels of scary to this,” she said. “Now, you’re being told to stay home. It’s much more uncertain.”

Ortenburger said the calls leveled a bit after that initial day, perhaps because victims feel trapped in their homes with abusers and unable to place a call. Crisis advocates have also come across people whose abusers used the pandemic as a scare tactic — telling their victims that summoning help could bring the virus to their doorstep.

That’s why the agency is expecting an influx of calls as restrictions loosen. People may feel safer seeking help if they can do so from a friend’s home or when the abuser returns to work.

It boils down to isolation. The ongoing pandemic and quarantine period threatens survivors’ access to family members or friends and other resources if they are staying with their perpetrator, said Heather Kaminsky, a graduate student and project coordinator for the Center for the Application of Substance Abuse Technologies (CASAT) at the University of Nevada, Reno.

“Interpersonal violence is an issue that thrives in silence,” she said. “And I think that's why we're also seeing an increase in it right now because people are isolated. So it's a lot harder to connect to other people.”

The shelter-in-place directive, however, has given way to a new trend: Metro Police are receiving more emergency calls from neighbors who are overhearing violence happening next door, across the street or down the hall. The violence likely existed all along, said Greene, who offered a more simple explanation.

“Neighbors are home now,” she said.

On the flip side, Greene said authorities have run into more difficulty convincing victims to seek medical treatment. Forensic exams for sexual assaults and strangulations, useful for evidence collection, also screen for other damage.

“It’s another limiting aspect to the help they could get,” she said.

As news reports and social media brim with well-meaning health advice to stay home, domestic violence advocates are trying to spread another message: Help exists. SafeNest, for instance, has been slipping its information in grocery bags at food distribution sites.

The pandemic hasn’t shuttered services. Hotlines are staffed and operating 24 hours a day, seven days a week. So are shelters. In other words, they’re essential services allowed to remain open.

“Really our goal at this point is we want survivors to know that we’re still here,” Cisneros said.

Still, COVID-19 has changed some of their operations. Social-distancing measures have been implemented in shelters, officials said, along with increased sanitation and hygiene protocols. They’re also asking residents about their health, and Safe Embrace has established an isolation room for anyone exhibiting symptoms.

Shelter isn’t the only form of help. Victims of domestic violence can seek a legal remedy via temporary protection orders. But the Second Judicial Court in Washoe County has seen a decrease in requests for temporary protective orders, said Judge Bridget Robb in the Family Division.

“What we have seen is that, in March, we were down by almost 50 applications from the month before, which was February, and February is a short month,” Robb said. “Here's the thing that concerns me: I want victims of domestic violence to know that even though the court right now is closed to personal appearances, we are absolutely open for TPO (temporary protective order) applications and for extended protective order hearings.”

She explained that victims can request an order a variety of different ways — digitally online, on a smartphone or in person at the court. Instructions for the process are also explained by telephone. The same is true down south. The Eighth Judicial Court in Clark County has launched a guided application online for temporary protection orders, and the Legal Aid Center of Southern Nevada is processing TPO applications by phone for those without computer access.

Greene said she hopes some of these new services, such as online and telephonic TPO applications, exist beyond the pandemic. The crisis, she said, has taught advocates and law enforcement agencies how to better help domestic violence victims.

But the trick will be maintaining those efforts going forward.

“History tells us that we’re really good for about 60 days after the crisis,” she said. “Then we drift back to what’s familiar.”

All signs point toward the virus leaving a nasty economic situation in its wake. And even when the community recovers medically and economically, other factors won’t change. Nevada has a transient population. Vast deserts surround urban areas. And people move here looking to start over, away from their social safety nets. All these factors, experts say, contribute to the state’s higher-than-average domestic violence rate.

“The fact of the matter is if we can rally around COVID-19, when we come out of this, let’s tackle the next epidemic that we’ve been dealing with for decades — and that’s domestic violence,” Ortenburger said.

As Rice bid the mother and her teenage daughter goodbye, a familiar thought washed over him: “I hope and pray to God I’m helping you.”

A Navy veteran, Rice joined SafeNest as a crisis advocate in January. He’s the only male advocate on staff, but he says the role suits him. He’s a natural chatterbox and doesn’t believe anyone should suffer. While he’s a relatively new crisis advocate, the in-field visits with domestic violence survivors — the organization’s preferred term rather than “victims” — have existed a bit longer.

SafeNest partnered with Metro Police about two and a half years ago for a pilot program dubbed “PS417” — the police code for a family disturbance. It started in the northwest valley area command, where there had been nine domestic violence-related homicides.

Officers were looking for ways to better serve people involved in those situations while reducing or eliminating homicides. So crisis advocates started meeting them on scenes.

“They got to see firsthand cases where they could help victims right then and there,” said Lt. Timothy Hatchett, who works in the department’s office of community engagement and helped launch the program. “Do you know what you can do after an arrest? Do you know what an emergency protective order is?”

Domestic violence calls in that area plunged by 30 percent during the pilot year, and zero homicides related to domestic violence occurred. Now, the program operates across Metro’s jurisdiction.

Still, Rice knows his contact with survivors may not immediately drive them to safety. Statistically speaking, it takes survivors about nine tries to leave their abusers.

The woman he encountered on this night had previously obtained a protection order against her husband. The slashed tire, however, indicated escalating violence.

Rice will likely never know how her story ends. He can only hope that maybe, just maybe, his conversation will help her escape the vicious cycle.

“SafeNest becomes something of a beacon in the darkness,” he said. “When you feel you have nowhere to go, you have us.”