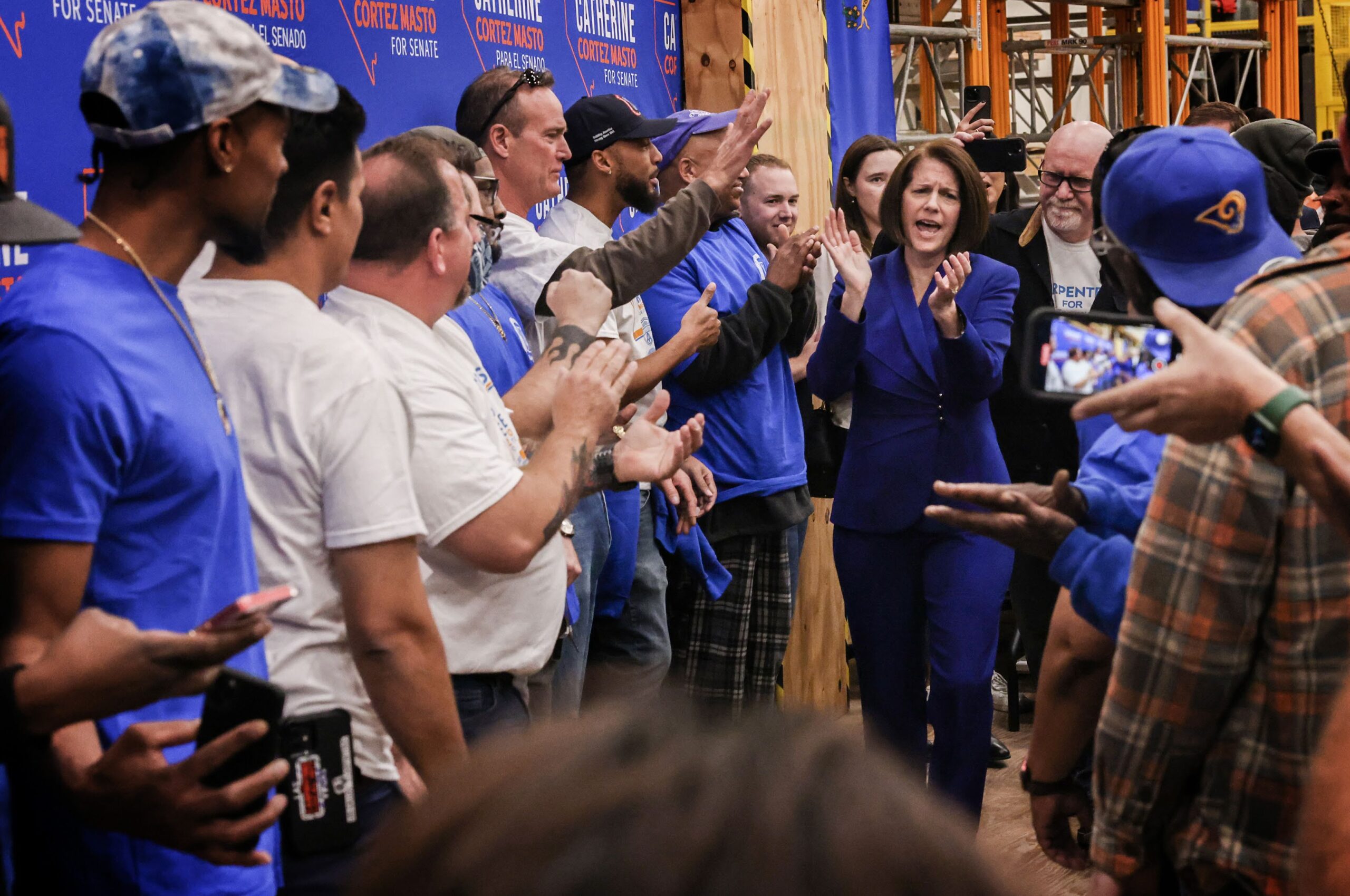 After four days of counting ballots, news organizations projected that Catherine Cortez Masto had narrowly won her second term as U.S. Senator for Nevada, defeating Republican Adam Laxalt and securing control of the Senate for Democrats.

Cortez Masto entered the 2022 midterms as one of the most endangered incumbent senators, as national Republicans looked to seize on poor economic conditions and an unpopular Democratic president.

Following a historically expensive Senate race that saw tens of millions of dollars pour into Nevada airwaves, she has emerged on top — if only just, leading by less than 1 percentage point as of Monday evening.

Now, the nation’s first Latina senator heads back to a divided Washington, amid expectations that Republicans will hold a razor-thin majority in the House, and the Democratic majority in the Senate will be unable to extend beyond 50 or 51 seats, depending on the results of next month’s Georgia Senate runoff.

Cortez Masto spoke with The Nevada Independent in a phone interview Monday to discuss the election, how she plans to work with Republicans back in Nevada and on Capitol Hill, and her legislative priorities for a second term.

Editor’s note: This interview has been lightly edited for clarity.

The Nevada Independent: Has Adam Laxalt called you or do you expect him to concede?

Cortez Masto: No, he has not called me. But you know, I didn't get a call from my last opponent [Republican Rep. Joe Heck] when I ran for the Senate.

We are still counting votes, but it does look like you're going to outperform President Biden in a lot of the state's rural counties — though not all of them, and they're still heavily Republican leaning. Why do you think that is?

I learned from my father [former four-term Clark County Commissioner Manny Cortez] and growing up in Nevada and running for office in the past, you just don't take any voters for granted. You gotta get out, talk to them, listen to them, ask for their support and their vote, and then make sure you follow up.

A lot of the work that I have done, whether it's on the wildfires or the drought or bringing broadband into the community or addressing mental health issues, have been informed by Nevadans because of the work that we've done together. And I've been able to really show the work that I've done to bring essential resources and support into the state. But, really, the key is just getting out and talking to Nevadans.

When you look at the two statewide races in Nevada, why do you think your campaign succeeded where Gov. Sisolak’s did not?

The only thing I can tell you is, I know from my perspective, in the past and running and just being in Nevada, I just try to be everywhere and show up to it. I think it's that important that I'm going to represent the people in Nevada whether they supported me or not.

I need to show up and go to where they are, whether it's in our urban areas or rural areas, and that's why every August when I have the opportunity to be out of D.C. and back in the home in Nevada, I get into our rural communities. I drive there and show up and that's true in our urban areas. I think it's important that not only do I provide support for so many Nevadans when they need the help and they can call my office and they can email it or they can or show up in person but I also go to them. And to me that's how it should be when you're representing a state.

There is going to be a split government in Nevada and a Republican in the governor's office. How do you plan to work with Governor-elect Lombardo?

Same way I worked with [Republican Gov. Brian] Sandoval when I was attorney general.

I think there is a way to work together. We’re all looking after the best interests of Nevada, and solving problems for Nevada and the people and businesses in Nevada. There's always going to be an opportunity to work together.

I'll work with anybody that really wants to solve problems and work on behalf of the people in the businesses in the state of Nevada. I did that with Governor Sandoval and I look forward to doing that with Governor-elect Lombardo as well.

You've pledged to block any attempt at a federal abortion ban, but what do you think, realistically, is the likelihood that that kind of ban is going to come up before Congress?

One-hundred percent. They already tried it. [Republican South Carolina Sen.] Lindsey Graham already tried to introduce it. So they're not going to stop. Of course they're going to continue.

Listen, we had a 50-50 Senate, Democrats are in control, and Lindsey Graham still introduced it to try to get something done. So yes, I think we have to be vigilant and make sure not only are we standing up for Nevadans — in which Nevada is a pro-choice state — and fight to ensure that not only physicians but [inaudible] get the support and they're not criminalized for providing — whether it's access to that health care as a physician or a woman who is seeking that type of reproductive freedom.

You've campaigned as a defender of [Deferred Action for Childhood Arrivals] and Dreamers. But the legal footing of DACA is on shaky ground. Assuming that Democrats aren't going to be able to do immigration reform on their own in Congress, what's the path forward for Dreamers?

We continue to fight. And I'm not giving up … I've already had calls and meetings with the White House and will continue to do so.

There is an opportunity, to some of my colleagues, Republican colleagues, who claim that they want to work and support Dreamers and work on legislation. You're welcome to work together and I will look for them to stand up and fight, but I'm not giving up. This is such an important issue that I know that we can absolutely make sure that DREAMers and TPS recipients, so many that were on the frontlines of this pandemic, are on a pathway to citizenship.

We can fix the broken immigration system and treat people with dignity, and at the same time, secure our borders. We can do both. I know, I was attorney general. For eight years, I worked on these border issues with the AG’s of Mexico, from drug trafficking to human trafficking. So yes, I will continue to fight for resources to make sure that we're doing everything to address those issues on the border. But we can also fix this broken immigration system and treat people with dignity. It's worth fighting for.

You said in your victory speech that Nevada has ‘rejected far right politicians’ this election. They're still counting votes, so it could change, but right now [Adam Laxalt] is doing about 1.5 to 2 points better than [Trump] in 2020. Even if Democrats won key races, why do you think more Nevadans are supporting Republicans in 2022? What's the difference?

I'm going to leave the punditry to other people. Here's what I know in my race and why it is so important, what I have seen: You're in a state where Nevadans have voted for pro-choice, to make sure that women have that right to choose.

You're in a state where voters have fought so that we can ensure everybody has the right to vote, and in a vote that is safe and secure for them, and they can vote in Spanish, English and Tagalog because people care about ensuring everybody has access.

And just like this election where, for me, getting elected and holding control of the Senate with the Democrats is a statement by itself by Nevadans. It is a backstop against the federal abortion ban trying to be pushed on the floor of the Senate. Again, these are what voters want in Nevada and I think [it] is important to listen to them.