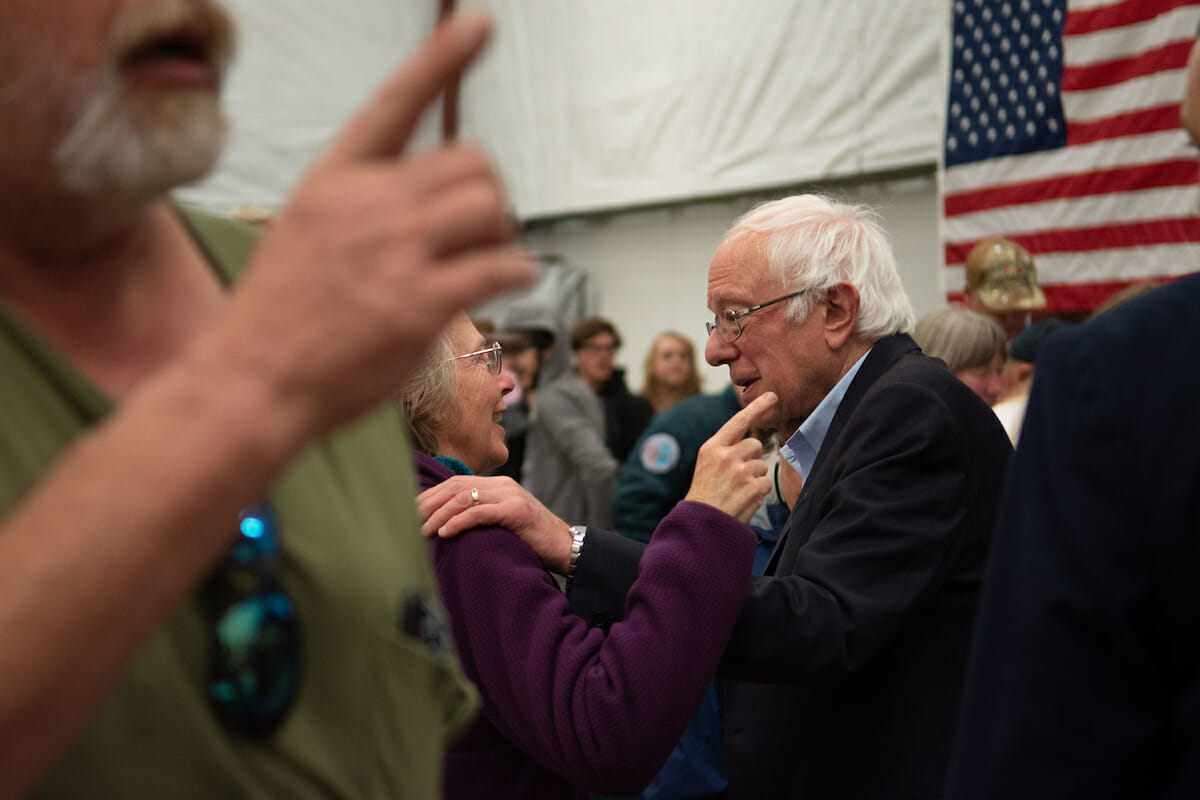 A Navy veteran who told Bernie Sanders that he wanted to kill himself because of his struggle with Huntington’s disease and overwhelming medical bills returned to a Carson City campaign rally three months after they first met to thank the Democratic presidential contender.

John Weigel offered Sanders a brown leather flight jacket from his time in Navy search and rescue training and a flight patch at the rally, which was held at the Stewart Community Center. After Sanders highlighted Weigel’s plight during a question and answer portion of a September rally, the veteran was able to regain lapsed military health insurance coverage and received tens of thousands of dollars from donors who sympathized with his plight.

“Thank you for rescuing me,” Weigel said, to cheers from the audience.

Sanders thanked Weigel and took the patch but said he could not accept the jacket.

“It’s a beautiful jacket. It’s a jacket that you earned and I want you to keep it,” the Vermont senator said, before telling the audience that returning veterans deserved “the best quality health care that this country can provide them.”

Weigel told the audience at a Carson City rally in September that he struggled with Stage 4 Huntington’s disease, a fatal, hereditary ailment that attacks the nervous system in ways similar to Parkinson’s or Alzheimer’s. He said his health care providers had stopped accepting his military insurance, even saying he had canceled his plan despite his claims to the contrary.

When Sanders asked how he was going to pay off the $139,000 bill he received, a visibly upset Weigel said he couldn’t and was going to kill himself.

The exchange prompted people including Sanders’ wife Jane to counsel Weigel after the event.

Weigel said that representatives from the offices of Sens. Catherine Cortez Masto and Jacky Rosen reached out, including one Rosen staffer, Xiomara Ibarra, who picked him up at his house and took him to help fill out paperwork that advanced his case.

Then, he worked with a representative from TriCare who help retroactively reinstate his military insurance. All he had to pay was $29.50 for each of the months that had lapsed, he said.

Beyond that, a GoFundMe page started on his behalf has so far raised more than $45,000 from more than 2,000 donors — many chipping in $5 or $10. He said he feels more at peace knowing he has money to cover unresolved medical expenses, and also plans to use that money to buy a motorized wheelchair and get another service dog.

“The GoFundMe thing — all the support that people would write was good, and then having the monetary security,” he said in an interview after the event. “I’m not getting rich. I’m living like I’m a refugee, so that helped a lot.”

His one disappointment though — that Sanders didn’t take the jacket that he received after his search and rescue training 25 years ago.

“It would’ve meant a lot to me if he would’ve taken it,” Weigel said.