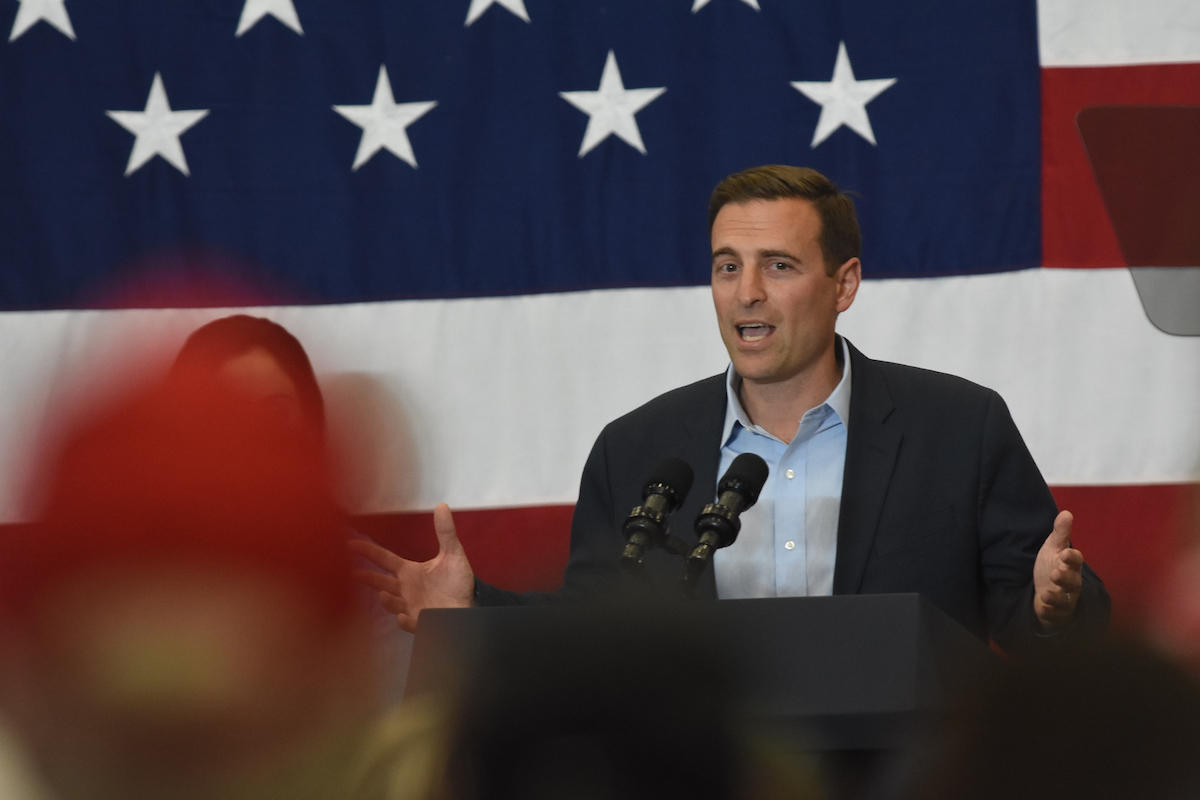 Republican Attorney General Adam Laxalt has largely stayed out of a fray about whether to give students more recourse if they’re subject to a predatory lender, even as hundreds of Nevada students who attended shuttered for-profit colleges have unresolved claims for debt relief and as attorneys general in other states have filed several lawsuits trying to boost borrower protections.

Laxalt’s office put out a press release in 2017, along with attorneys general from 44 other states, to inform Nevadans that they might be eligible for student loan forgiveness if they enrolled in Corinthian Colleges, a network of for-profit schools that included Everest College in Henderson and went bankrupt a few years ago.

“My Bureau of Consumer Protection will continue to fight for students who fall victim to institutions that misrepresent themselves, in an effort to help make Nevadan’s aware of their rights and options,” he wrote in April 2017.

But there were no other press releases issued on the matter of student loan forgiveness in the year and a half after that, as other attorneys general launched a fight with the Trump administration on the matter. Asked about whether Laxalt’s office had been involved in unpublicized activity on student loan fraud, a spokeswoman said he was involved in confidential working groups that deal with fraudulent lending.

“Since that time, our office has sent letters to the approximately 1,300 Nevadans eligible for this loan cancellation. In addition to these efforts, AG Laxalt’s Bureau of Consumer Protection is actively involved in National Association of Attorneys General confidential, multistate working groups similar to the Corinthian College matter,” Laxalt’s office said in a statement. “My Bureau of Consumer Protection will continue to actively fight to protect students against deceptive and fraudulent lending practices, including through Nevada’s Deceptive Trade Practices laws and multistate working groups.”

In the meantime, a fight for student loan forgiveness has raged at the national level, leading some — including congressional candidate Steven Horsford — to specifically call for the ouster of Education Secretary Betsy DeVos. (Horsford cited several reasons for opposing DeVos, including "students and educators in Nevada and across the country deserve a Secretary of Education who wants our nation's education system to work for them — not special interests.”)

The Corinthian Colleges saga is the most visible in the predatory student loan fight. Critics say the company — which included brands such as Heald College and Everest College — had a business model that required a constant flow of new students and relied heavily on federal financial aid.

The colleges marketed their vocational programs to non-traditional students through heavy TV advertising, but were accused of inflating their job placement rates and misrepresenting the career prospects awaiting its graduates. Lawsuits have also alleged that the company pushed students into high-interest private student loans to pay for their education in an attempt to meet a requirement that schools receive at least 10 percent of their revenue from sources other than federal financial aid.

Critics also accuse them of aggressively targeting veterans because GI Bill funds are not considered federal money, and can help colleges achieve the 10 percent requirement.

At an average cost of more than $20,000 a year, the programs left many students saddled with debt if they didn’t complete the program or made less than they were expecting. Corinthian and an affiliated loan program are accused of harassing students about repayment, including threatening not to let them graduate and sending them notices that they would be subject to lawsuits if they didn’t pay.

The company’s demise came after the federal government, concerned that Corinthian had falsified job placement data, restricted federal money. A deal struck between the schools and the federal government called for the closure and sale of Corinthian schools and cut some students’ private loan debt by about 40 percent, but did not address federal student loans that made up the majority of the debt.

The Obama administration started tightening up regulations in the wake of the Corinthian saga, but the Trump administration has reversed course, arguing that the rules didn’t take all stakeholders’ interests to heart, including those of the colleges, and inordinately target the for-profit education sector.

One of the first actions on the matter was in June 2017, when the Department of Education announced DeVos would “[press] pause on burdensome gainful employment regulations.” The regulations, adopted during the Obama administration, require for-profit schools and non-profit and public certificate programs to demonstrate they’re preparing students for “gainful employment in a recognized field” before they can receive federal funds.

A Department of Education analysis in early 2017 assessed post-secondary programs based on how much debt graduates have. Failing schools were ones in which student loan payments accounted for 30 percent or more of a graduate’s discretionary income; 98 percent of the programs that failed the test and were put on notice that they might lose federal funds as a result were in the for-profit sector.

“Once fully implemented, the current rules would unfairly and arbitrarily limit students' ability to pursue certain types of higher education and career training programs,” DeVos said in a statement. “We need to expand, not limit, paths to higher education for students, while also continuing to hold accountable those institutions that do not serve students well."

A few months later, a group of 18 Democratic attorneys general sued over the lack of implementation of the rule. The agency called it an attempt for the plaintiffs to score quick political points, but the prosecutors framed it as defense of students.

“It’s outrageous for the department to say they’re going to allow these predatory institutions to continue to take advantage of people who are vulnerable, people with very few resources,” Maryland Attorney General Brian Frosh, who led the lawsuit, told The Washington Post.

Elements of the rule were further delayed this June, when DeVos announced she would allow another year before institutions had to post data about median earnings for graduates.

In another incident of pushback against DeVos, a group of 20 attorneys general (this time bipartisan; Colorado AG Cynthia Coffman signed on) wrote to DeVos in July over the department’s proposed changes to student loan regulations. They argued new limitations on information that would be disclosed to law enforcement agencies including state attorneys general offices would hamper states’ abilities to pursue cases of fraud in the for-profit education sector.

Laxalt was not part of that group.

DeVos has also gone after a “borrower defense to repayment” rule, which has been around since the 1990s and nullifies federal loan obligations for students whose colleges used illegal or deceptive tactics to sign them up for loans. The rule was little used until 2014, when the failure of Corinthian College brought a rush of claims, and the Obama administration tweaked it to shift more of the burden to the schools and prevent colleges from forcing students into arbitration.

DeVos moved to end the rule in June 2017, which triggered another lawsuit in July. Nineteen Democratic attorneys general sued to oppose DeVos’ quest.

Later, the Department of Education attempted to replace the rule with one that required students to prove they were defrauded by a college before they could score student loan forgiveness.

“Postsecondary students are adults who can be reasonably expected to make informed decisions if they have access to relevant and reliable data about program outcomes,” the department said.

That proposal was expected to save the government $13 billion over the next decade, mostly in unpaid student loan relief, compared with what it would have spent under the Obama rule.

Twenty AGs — but not Laxalt — wrote to oppose Devos' changes, saying that the burden of proof for a defense of repayment claim was nearly impossible to meet.

In September, a federal judge ruled in favor of the attorneys general who sued to oppose the effort to delay the rule. The same judge ruled earlier this month against for-profit colleges that sought to intervene and block the regulation, meaning the Department of Education will have to implement the rule.

Critics of the administration have said the Department of Education is too slow to resolve the cases of students of the since-shuttered for-profit schools. Data from May show that since President Donald Trump took office, more than 800 borrower defense claims have been filed in Nevada, 115 have been approved, and 1,295 remained unresolved.

Nearly half of the claims were from Corinthian Colleges.

A group of four attorneys general sued last December over what they said was the Trump administration’s refusal to discharge loans for students from Corinthian Colleges, in spite of promises under the Obama administration that the loans could be forgiven. Laxalt was not part of the suit, or an amicus brief from eight other states that were in support of the lawsuit.

Asked about his plans for college affordability and relieving student debt, Laxalt spokesman Parker Briden pointed to the attorney general’s comments on community colleges and repeated a criticism that’s been featured in ads against Sisolak, who was on the Nevada Board of Regents for a decade.

“Adam has talked about supporting community colleges and trade schools as an alternative for some students to four-year universities, a new college scholarship program for future teachers, and working with leaders to keep costs down for students,” Briden said. “Adam has a record of getting results and protecting Nevadans' wallets, unlike Steve Sisolak who doubled student tuition while on the board of regents.”

Asked about what the Democratic candidate might do about college affordability and potential predatory practices in higher education, spokesman Grigsby Crawford said Sisolak would push back on Trump administration practices.

"Having been on the Nevada Board of Regents for a decade, no candidate understands higher education better than Steve Sisolak,” he said. “Unlike his opponent, Steve Sisolak pledges to work with stakeholders at the state and federal levels to ensure Nevadans can further their education without being scammed in the process."