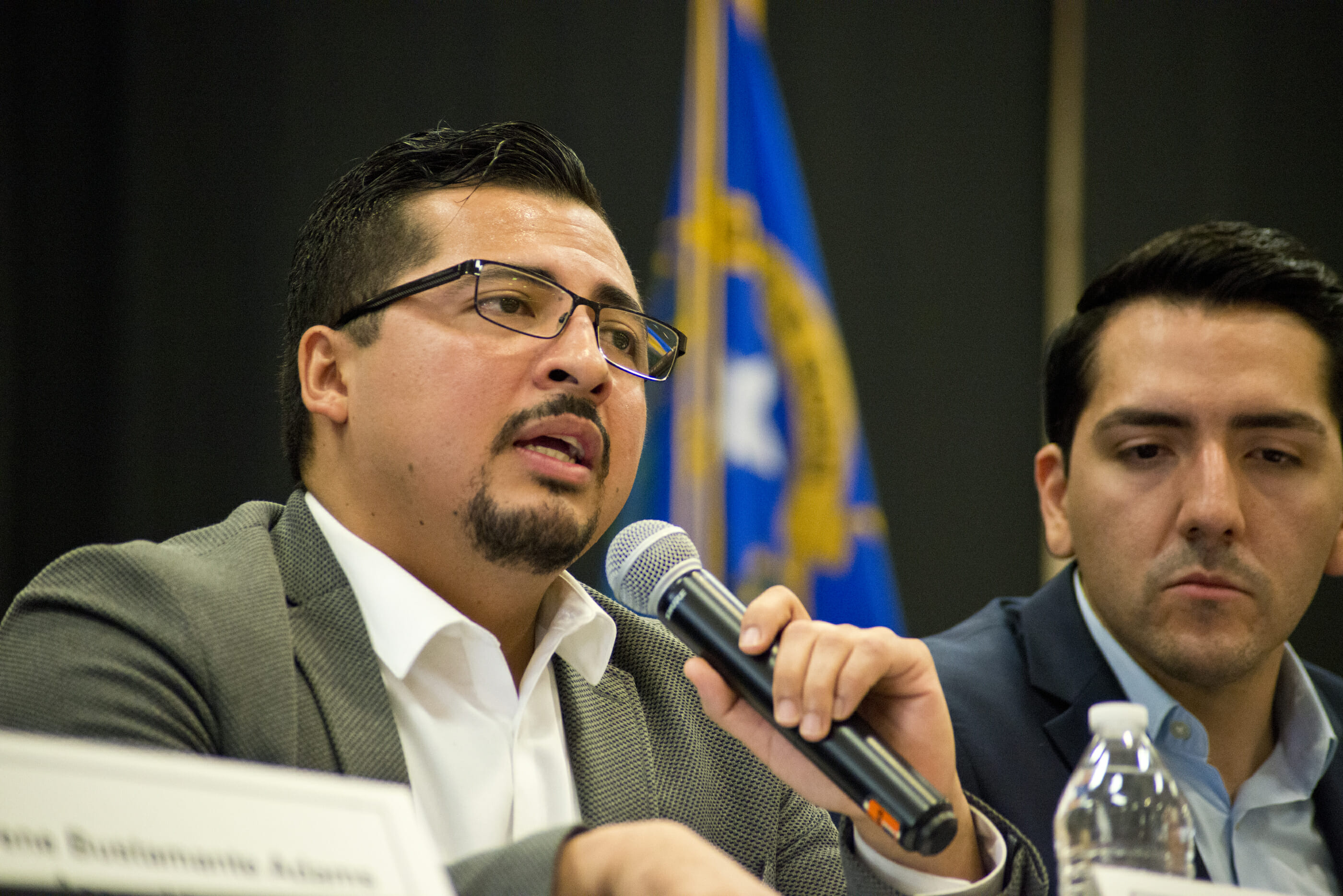 Latino essential workers continued to work as COVID-19 spread through their communities, a factor contributing to the current disproportionate rates of infection of COVID-19 and deaths caused by the virus among the population across the state.

In response, Latino leaders at the state and local level have mobilized to ensure the community receives the aid and resources it needs.

The Nevada Hispanic Legislative Caucus created a COVID-19 task force amid the initial outbreak in March that issued a list of recommendations to Gov. Steve Sisolak on how to support the Latino community amid the pandemic.

The recommendations specifically for the Latino community included a collaborative effort between the state government, local nonprofits, medical professionals and the Office of New Americans to ensure access to health care for undocumented Nevadans, and messaging and information available in Spanish regarding unemployment, food banks, the state health insurance exchange and how to receive health care.

State officials have worked to accomplish, or at least make progress, in most of these areas. Other efforts have been accomplished by the Hispanic Legislative Caucus’ task force itself, local governments or nonprofit organizations.

The task force has accomplished a successful food donation service that delivers to 60 to 80 families weekly in collaboration with La Bonita supermarkets in Southern Nevada.

However, metrics on COVID-19's effect on Nevada Latinos worsened since March, prompting Latino leaders to adjust and refocus their priorities.

Democratic Assemblyman Edgar Flores, a member of the task force, is concerned by the relatively higher infection rates in the community and is still working to stretch the task force’s resources across the state.

“It is a very concerted effort between a coalition of folks to start spreading the message that it's our families that are getting real sick out there — our immigrant Latino families,” Flores said. “So what we've done is we've started a very specific campaign here solely at our Northern Nevada family and explaining the resources that we have in Elko and Washoe all the other jurisdictions as opposed to just focusing heavily on Clark County.”

In Washoe County, Latinos accounted for 730 COVID-19 cases of the county’s tally of 1,719 cases as of Saturday, or about 42 percent, and mark the highest infection rate in the county of any ethnic group. Latinos make up about 25 percent of Washoe County's overall population, according to the Census Bureau.

Similarly, Clark County officials reported Saturday that Latinos in Southern Nevada account for about 34 percent of COVID-19 cases and identified the ethnic group as the hardest hit by the virus. Latinos make up about 31 percent of Clark County.

Other general recommendations made by the task force were: additional food donations and supplies to rural communities; accessible testing and an adequate supply of personal protective equipment for health care workers; drive-through testing and elimination of overcrowded emergency rooms to reduce the risk of exposure of infection, and efforts on behalf of the Nevada Department of Employment, Training and Rehabilitation to resolve issues getting through the system for unemployment benefits.

After being excluded from the federal stimulus payments provided by the Coronavirus Aid, Recovery and Economic Security (CARES) Act, the undocumented immigrant community faces additional obstacles amid the pandemic. This includes high rates of community members without health insurance, limited access to bilingual public health information and food insecurity.

Despite the task force’s accomplishments, such as the food donation service, there are still other matters they hope to solve, such as finding quicker ways to provide economic aid to the community without relying on federal or state government efforts.

Flores proposes that working more closely with nonprofit organizations and private businesses could be a more efficient way to bring economic aid to the Latino community, rather than waiting on bureaucratic governmental processes.

“One of the things we've learned and we've been able to identify is that we found a lot of allies in the community who fortunately don't have to wait for a specific act to pass or for a specific set of funding to come in,” he said.

However, that’s still a work in progress and while it could be a good idea for moving forward, it’s not a certain, consistent or streamlined effort just yet.

The task force had also requested that Sisolak provide an accessible health plan for undocumented and uninsured Nevadans, which also has yet to officially materialize, although Flores said there are other ways for undocumented community members to receive care.

A few months have passed since the initial outbreak of the virus, and the concerns of task force leaders have evolved.

The assemblyman admitted that a few additional concerns have cropped up since March, including rising infection rates among Latinos across the state and strained efforts to adequately reach and inform community members about the virus.

“One of the things that we've always been very critical of is that we need to make sure that when we're messaging the community that we're ensuring that we're using channels that are typically visited and used by the Hispanic community, one, and two, that they're adequately funded,” Flores said.

He explained that a possible reason for the sharp increase in cases among the community can be related to the essential industries in which community members tend to work, such as construction, food production and distribution and agriculture.

“Because those are the industries and the areas that haven't closed and have consistently stayed open, obviously there's folks that are at most risk and so we attribute the fact that just so many folks from the community have continued to work to being the real reason that we're seeing those numbers increase out there,” he said.

And the fact that so many Latino and immigrant community members are deemed essential workers that have continued on through the pandemic is another reason the exclusion from federal or state aid frustrates leaders like Flores and prompts them to find solutions.

“A lot of folk who are applauded for being essential are consistently being reminded that while they're essential and everybody will applaud them, that's all we're doing,” Flores said. “We're overlooking so many folk and, and that I think it's easy for folks to get discouraged.”

A May 1 protest organized by the Arriba Las Vegas Workers’ Center put a spotlight on the issue, with hundreds of immigrant workers showing up to ask for Sisolak’s support and aid as undocumented people missed out on aid from the CARES Act.

Asked if he thinks their request will be granted, Flores said he has hope.

“The reason I say I think there is hope for it is because not once have we had a conversation with the governor's office and that they did not express a genuine, sincere desire to try to make sure that all Nevadans are being taken care of,” he said. “What that means is though they have not necessarily found a solution today, it reminds us that they are constantly looking and trying to figure out what can and cannot be used to help our folks.”

Flores added that a similar counterpoint comes up regularly when he has this conversation.

“And that's where the conversation really goes in a direction that was never meant to go in that direction because no one ever said, ‘let's pick and choose,’” Flores continued. “Everybody is saying, let's take care of everyone. And when you do that as a state, we're better off. So it's just constantly reminding folks that it's not about not helping a particular group. The conversation that we're having is about helping every group. That's the difference.”

Flores shared the frustration he feels when he speaks to constituents who are undocumented essential workers that are expressing their concern and anxiety caused by the lack of tangible government support amid the pandemic and its economic consequences.

“The most frustrating thing is when you start talking to these families and you ask them ‘what do you do?’ Right away you start listening to essential workers. They're telling you that they're working in the construction industry. They're like, ‘Oh yeah, I'm working on that fancy stadium that it is supposed to help generate all this revenue in the future. I'm the one that's waking up at four in the morning. I work a graveyard shift …  I'm the one that's cleaning and doing the sanitation at this one facility.’"

“You start hearing all of these stories and they just make it very difficult for folk who are doing everything right and they're trying to do everything right, to have that sense of, ‘Yes, the system is taking care of me too.’ Right? Or that sense of ‘I'm being protected as well — I matter.’”

Flores added there is little he can do as a state legislator to immediately change the situation. Additionally, he said, most of Nevada’s federal delegation agrees that support, aid and government resources should be accessible to all Nevadans, regardless of legal status.

However, “the federal conversation doesn’t just involve them, it involves a whole host of other folks who represent different states … and their interests and who they represent are very different and they don’t fall in line with our view that we should be taking care of all essential workers, not just some of them,” Flores said.