Biden says Democratic millennials are not ‘a generation of socialists,’ draws distinction with Sanders on health care 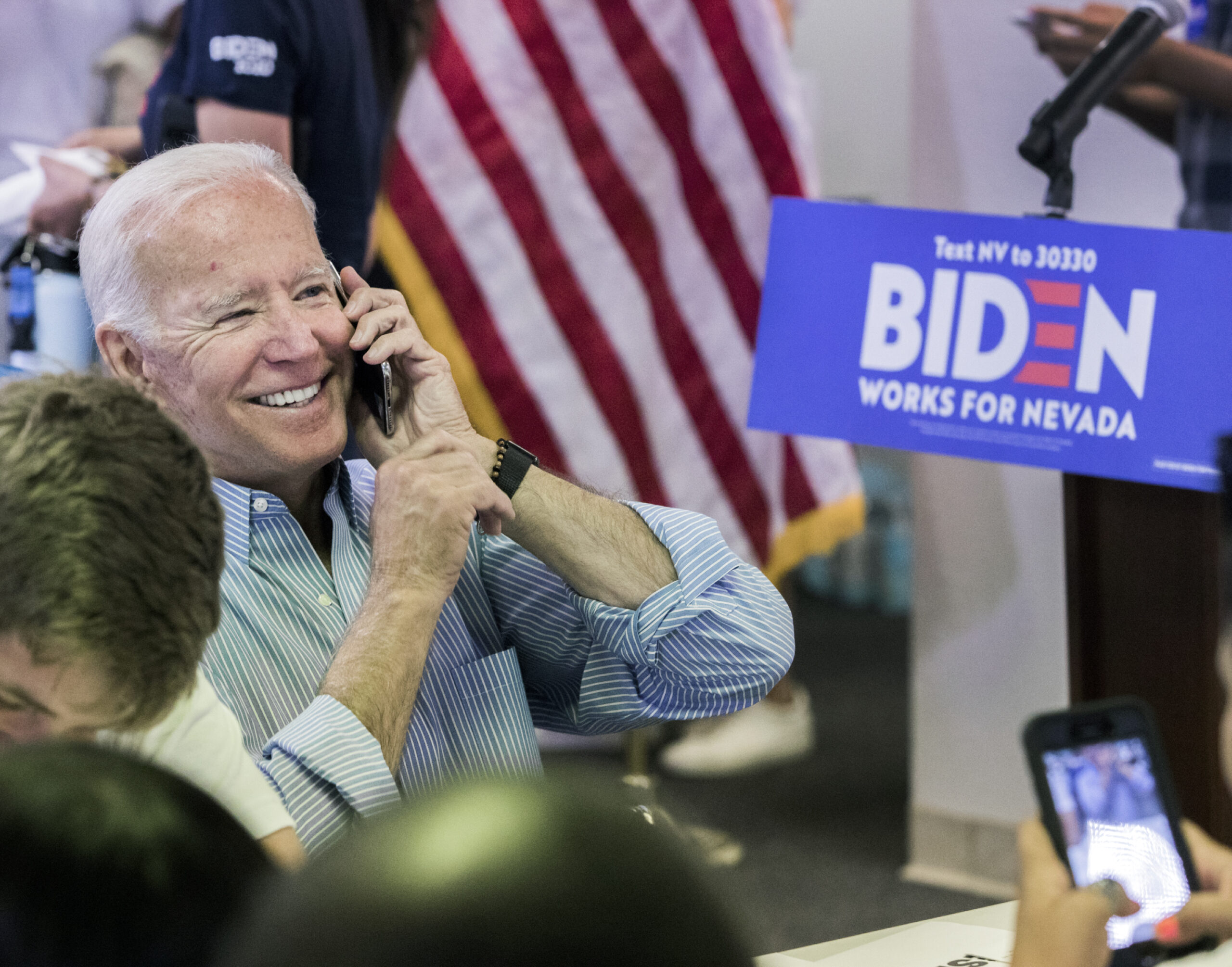 Former Vice President Joe Biden, asked at a downtown Las Vegas event on Saturday how to get a younger generation of Democratic voters on board his presidential campaign who want “radical, revolutionary change,” dismissed the premise outright.

“They’re looking for somebody who, in fact, can articulate what they believe and who is in the mainstream,” Biden said. “They're not all — and this is not a hit on Bernie, my word — but this is not a generation of socialists.”

Biden’s remarks come amid a week-long health care battle between Biden and Sanders that represents a microcosm in the fight over what the future of the Democratic Party should look like. Addressing Democrats at a Local Brews + National Views event hosted by the state Democratic Party, Biden drew a careful distinction between his recently-released health care plan building on the Affordable Care Act and the sweeping reform backed by Vermont Sen. Bernie Sanders.

Biden sought to put Sanders — who supports a single-payer health care system — in the same camp as Republicans lawmakers who have tried to do away with President Barack Obama’s landmark health-care law. It’s an approach the former vice president has taken this week after releasing his health-care plan, which would create a public health insurance option but otherwise leave the broad contours of the health-care system intact.

“There’s a lot of people, including in our party as well, who want to get rid of Obamacare,” Biden told the crowd of about a couple hundred.

Biden credited Sanders for at least “telling the truth about his plan” — which the Vermont senator has estimated could cost up to $40 trillion over a decade — and pointed to Sanders’ proposal to impose a 7.5 percent income-based payroll tax to help fund the plan. (When Biden struggled to remember the exact percentage, he asked for help: “I don’t want to get in trouble with Bernie. Does my staff remember?”)

"He is lying and trying to scare people, and he knows it,” Shakir said.

In an interview with The Nevada Independent before the event, Biden called Sanders “a good friend,” but touted his own proposal as “a more direct, immediate way of providing a Medicare alternative if people want to buy in.” Under Biden’s proposal, people would be able to remain covered under health insurance plans through their employer or the individual health insurance market, or buy into the public option.

Biden panned the Medicare-for-all proposal favored by Sanders and others for eliminating all private insurance plans.

“What Bernie's plan calls for, there's a section, and it says all private insurance goes away, period,” Biden said. “I think people should be able to have the choice to keep their private insurance if they want.”

He said that he “wasn’t suggesting Bernie’s plan might not be a good plan” but rather “that it’s incredibly expensive.”

“It's going to take a lot of time and we should build on something that's really good that we have right now,” Biden said.

Asked about a statement from Sanders to the New York Times that Biden sounds “like Donald Trump” when he talks about Medicare-for-all, Biden dodged the question at first, before giving a pithy response.

Earlier in the day, Biden attended a phone bank with roughly 75 supporters at the IBEW Local 396 headquarters on the east side of Las Vegas.

Saturday marked Biden’s second trip to Las Vegas since announcing his Democratic presidential bid earlier this year. In May, he held a rally at the International Union of Painters and Allied Trades in Henderson. He will return in two weeks with 18 of his competitors for AFSCME’s 2020 Public Service Forum, which will be held at UNLV and co-moderated by Nevada Independent Editor Jon Ralston and Huffington Post Washington Bureau Chief Amanda Terkel.

Biden also staked his ground on a number of Nevada-specific issues during his interview with the Independent on Saturday.

On the Department of Energy

Biden said that, as president, he would hold the Department of Energy responsible for its actions on nuclear waste in Nevada, including sending nine shipments and 32 containers of dangerous radioactive waste to the state between 2013 and 2018 that were supposed to be low-level radioactive waste.

“That's where it starts because that's where the shipments are occurring,” Biden said. “They're coming across state lines as well. It just does not make sense.”

He also reiterated his opposition to the construction of a long-term nuclear waste repository at Yucca Mountain, and said that high-level nuclear waste would have to continue to be stored where it is — at or near one of the more than 100 facilities across the country where it is generated — for the time being

“It should be basically kept on site until we can find some other way to deal with it, and, now, there's no other way that I'm aware of,” Biden said.

On marijuana and the criminal justice system

Biden reiterated his support for decriminalizing marijuana nationwide and rescheduling it as a Schedule II drug to make it easier to conduct medical research. But he said he does not support the federal legalization of marijuana and that the issue should be left up to the states. (Ten states, including Nevada, and the District of Columbia have legalized recreational marijuana use.)

“There's been no long-term studies,” Biden said. “I would not curtail the state's rights to make those decisions, but I would not make that federal decision until those studies are finished.”

Asked why the decision should be left up to the states when studies have shown that people of color are disproportionately incarcerated for marijuana-related offenses, Biden said “because it’s a state law.”

He also reiterated his support for automatically expunging prior criminal records for marijuana possession.

“A lot of people in some states, you can expunge the record, but they don't have the wherewithal to get a lawyer to know how to do and what to do,” Biden said.

Asked whether he had any specific proposals to help marijuana businesses access banking services, Biden said that he hadn’t thought about the issue, but that it should be left at the local level. Currently, marijuana businesses operating in states where the drug has been either partially or fully legalized are prevented from accessing credit unions and banks because the drug is illegal under federal law.

“The federal government, I don't think, is in the business of deciding whether or not we should promote or not promote the industry,” Biden said. “It's a decision that should be made locally.”

“I regret the information we were given turns out not to be accurate,” Biden said. “Since it passed, I've been trying to get it changed.”

He said that there should be zero difference between penalties on the two drugs.

Biden also said he agrees with the decision of a federal district court in New Hampshire that the federal Wire Act only applies to sports betting. Earlier this year, the Department of Justice released an opinion saying the law applies to all forms of interstate gambling and not just sports betting as it had previously been applied.

“I would reverse the White House opinion that was then reversed and overruled by the court. The court is correct,” he said. “That should be the prevailing position.”

The Department of Justice has said that it will hold off enforcing its opinion until at least the end of the year as a result of that decision.

Biden said that he does not support decriminalizing sex work nationally, though he wouldn’t seek to impinge on Nevada’s decision to allow prostitution in certain jurisdictions.

“In your state, you've made that judgment and you have a mechanism by which to oversee what's happening, and so I'm not suggesting I'm going to come and change the law in your state,” Biden said. “But there's a whole range of things that matter: It matters whether or not how you got into the trade, whether you got pulled into the trade or whether you're underage, et cetera, and whether or not you're owned by a John who is taking your money, et cetera. There's a whole range of things.”

On wildfires and climate change

Biden took a dig at President Donald Trump for blaming wildfires last year on a lack of raking of forest floors and reiterated his plan to take the country to zero emissions by the year 2050.

“That's why we should be focusing on alternative energy, wind, and solar,” Biden said.

He also expressed his support for states affected by wildfires.

“There's a lot we can do, but the fact of the matter is states deserve that help, and it's a natural disaster for them no different than flooding in the east, or crops being wiped out in the Midwest, et cetera,” Biden said. “We have to provide the help.”

Update 7/20/19 at 7:39 p.m.:  This statement, which was initially attributed to Sanders, has had its attribution corrected to Biden: "What Bernie's plan calls for, there's a section, and it says all private insurance goes away, period."