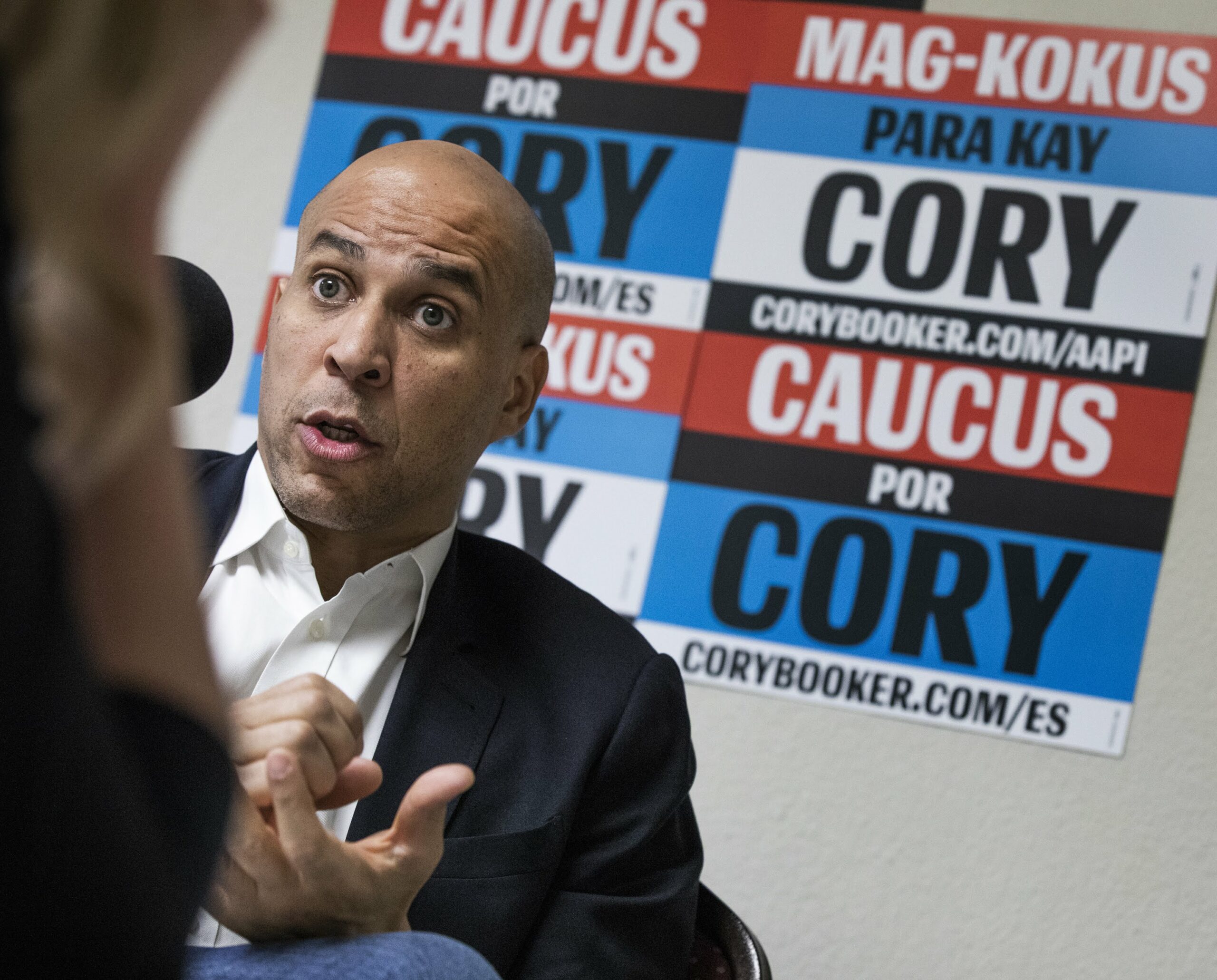 He chalks up his failure to notch the required four polls at 4 percent support or more and the success of others as emblematic of the outsize influence of money — and its ability to artificially boost polling numbers through television ads — in the Democratic presidential primary field. One of the seven candidates who did make the debate stage was Tom Steyer, a California billionaire who entered the race in July and has quickly boosted his profile in the presidential race by spending millions of his personal wealth on advertising.

“What does that say?” Booker said, in an interview on the IndyMatters podcast this week. “Really, what is it saying about our party that the only people that can really compete is folks that have the ability to write themselves $5 million checks?”

Booker, who spearheaded a letter this week signed by eight other Democratic presidential hopefuls urging the Democratic National Committee to lower the qualification thresholds for the January and February debates, said the existing process is “selecting out a lot of the diversity in our party.” Six of the seven candidates who appeared on the Thursday debate stage were white, with tech entrepreneur Andrew Yang the sole candidate of color.

But asked exactly how the process should change, Booker said that he wasn’t “going to prescribe that.”

“I do think that the party that stands for equality and inclusion should have a much better process for figuring this out than what is being made manifest now in terms of the unintended consequences,” Booker said.

“Here we are prefacing something on polls, which we've seen Bloomberg step in run an unprecedented amount of online ads, juicing up his poll numbers and suddenly that makes you a viable candidate as opposed to people we've seen fall out who have incredible [backgrounds],” Booker said.

He lamented California Sen. Kamala Harris’s decision to drop out of the presidential race despite what he described as her “tremendous qualifications winning in a state of 44 million people.” Harris attributed her decision to abandon the race earlier this month to a lack of funding.

“What I heard after Kamala dropped out of the race from people who are my supporters was this frustration, this anger, this sadness and disappointment because it just felt like something about it just didn't seem fair,” Booker said.

Booker compared Harris’s fate with that of John Kerry, who at this point in the 2004 presidential race tapped into his own coffers to keep campaigning as he fell significantly behind Howard Dean in the polls. He went on to win Iowa, New Hampshire, and, eventually, the Democratic nomination that year.

But Booker remains optimistic of his own chances and doesn’t put much stock in the polls, which he has struggled in. He also said that missing the debate isn’t the “mortal blow” he might have thought it would have been three months ago.

“I'm excited about our pathway to the presidency and even more excited that our pathway seems, this underdog pathway, seems to be the way we've elected those presidents who have been movement leaders,” Booker said. “And I think that I'm the best person in this field clearly to reignite that Obama coalition.”

And Booker really wants to win Nevada — not just because it’s the third early nominating state, but because it’s where his mom lives.

Booker also addressed complaints that the process of impeaching President Donald Trump has been too partisan. The House of Representatives voted Wednesday night largely on party lines to impeach the president for abuse of power and obstruction of Congress.

“This is very troubling, on both sides of the aisle, if this is treated as a partisan process. It is very troubling if you look at it that way because it dilutes the gravity of what we're talking about here, which is removing a sitting president from office,” Booker said. “That is something that should make us all sad to think about whether it's our party or not.”

He urged people to ignore the rhetoric and look at the facts of the case.

“Did this president use his office — I should say abuse his office — for his own personal gain, compromising security issues, the rule of law, and then did he, which is the second article, obstruct justice the investigation, the proper investigation of that?” Booker said. “That's the question before the United States of America.”

On health care, Booker balked at the idea that he is attempting to carve a middle of the road path between the single-payer, government run Medicare-for-all plans that would abolish private insurance favored by some of his rivals and the proposals to expand on the Affordable Care Act to establish a public option supported by others.

“These academic debates don't connect directly to how are you going to deliver real change for people. So I don't know about moderate, middle of the road,” Booker said. “As president of the United States, every single day I'm going to drive the ball down the field to lower your expenses and expand your access.”

The New Jersey senator also weighed in on the issue of decriminalizing sex work, which he supports. Booker said that he would like to see the federal government play a support role to the states, allowing them to develop their own laws and regulations.

“I am not going to be a president that tells states how to govern their laws in this area. I'm just not,” Booker said. “With the federal laws, I think we can definitely rewrite them, re-establish them, and really start turning to the states and doing things to incentivize them to do the kind of things that uphold the values we all hold dear.”

Booker suggested that he would like to see some changes made to SESTA (the Stop Enabling Sex Traffickers Act), a piece of federal legislation signed into law last year aimed at cutting down on online sex trafficking that sex work advocates say has actually made it more dangerous for sex workers. Booker and his Senate colleagues running for the Democratic presidential nomination all voted in favor of the law.

But Booker didn’t specifically address whether he regrets voting in favor of it or outline the specific amendments he would like to make.

“Look, there's processes in Congress, things like Medicare have had an evolution and you learn, you understand and you see unintended consequences,” Booker said. “And so are there changes, are there things that we need to do better as Congress? Absolutely.”

“We need to address the concerns that have been brought forward by advocates,” he added.

The New Jersey senator also weighed in on the issue of water contamination associated with the Anaconda Copper Mine outside of Yerington, touting his environmental cleanup proposal.

“The lack of urgency on these issues and for the communities in this state, these are life or death issues,”  Booker said. “And so we are going to make massive investments in cleaning up these environmentally toxic sites so that people have what I think should be a right in America, clean soil, clean water, clean air.”

He also wouldn’t go so far as to call for tribal consent in order for mining projects with the potential to contaminate groundwater to proceed, as former Housing and Urban Development Secretary Julián Castro has. But described tribal sovereignty as a “governing value.”

“I think there's a big problem in this country that our federal government has not given all due respect to the word sovereignty, tribal sovereignty, and this is something that is really frustrating to me,” Booker said. “My beliefs are resident with, I think, what Secretary Castro was saying, which is just that we need to be a nation that starts to begin to respect the law and the ideals of tribal sovereignty, which we do not do.”