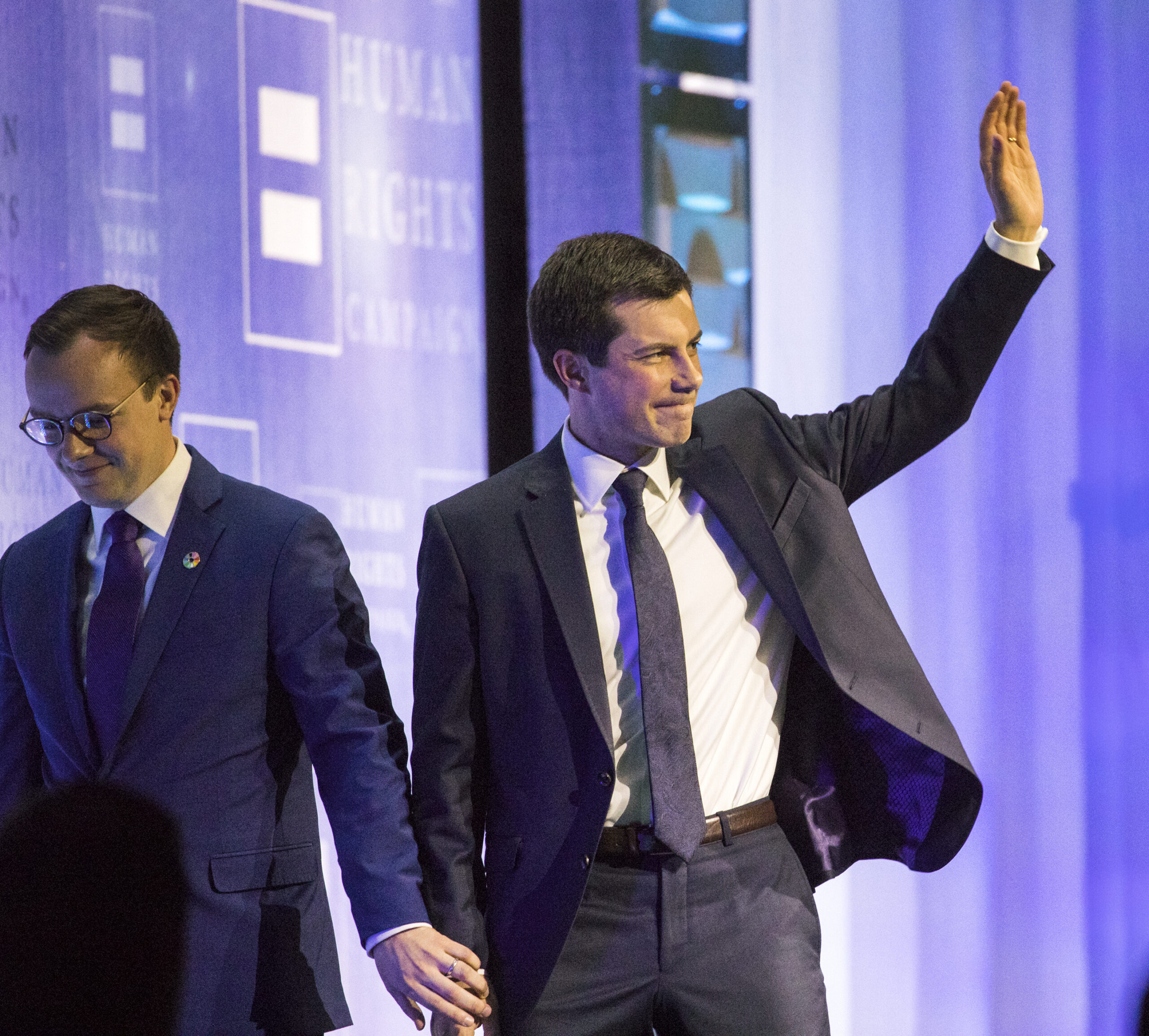 Democratic presidential candidate Pete Buttigieg knows a thing or two about what it feels like to not belong.

Ten years ago, when Buttigieg first stepped foot on a U.S. Navy base, he couldn’t reveal his sexual orientation. Five years ago, his marriage to husband Chasten Glezman wouldn’t have been legal in his home state. Now, the openly gay mayor of South Bend, Indiana, is running for the nation’s highest office — a situation Buttigieg said he never would have dreamed possible as an awkward teen growing up in a conservative state.

“Part of why I launched this unlikely campaign, part of why I’m so optimistic about the future of this country is because even with everything we’ve been through, I have faith in the possibility of change and growth in this country,” Buttigieg said Saturday night in Las Vegas.

The Indiana mayor and rising star in the crowded 2020 Democratic field delivered the keynote address at the annual Human Rights Campaign dinner, held this year at Caesars Palace. Buttigieg shared his coming-out story during a speech anchored in what he said is his belief that Americans need to tear down the metaphorical walls between each other and recognize that everyone has their own story.

Just because he’s a gay man, Buttigieg said, doesn’t mean he understands what it’s like to be a transgender woman of color living in the United States.

“The more you know about exclusion, the more you think about belonging,” he said. “We have a crisis of belonging in this country.”

The 37-year-old also offered something of an olive branch to women and minority voters who may not be keen on electing another white, male president.

“As much as I hope you will decide to be for me, if you don’t, I am still absolutely committed to being for you,” he said.

During his roughly half-hour speech, Buttigieg offered his support for women’s reproductive rights, referenced the need for better cybersecurity and election integrity and championed scrapping the Electoral College and moving to a popular vote. But he mostly steered clear of mentioning President Donald Trump, aside from saying the “horror show in Washington is mesmerizing.”

“The truth is we can’t let this election be about the president because if Americans see us spending all of our time talking about him, they’ll be left with this question: Who’s talking about us?” Buttigieg said.

It’s a message that resonated with William Wrightsman, 56, a professor at Touro University. Campaigns should be less about the current commander-in-chief, he said, and more about the men and women aspiring to be president.

“That’s what we want to know — what kind of America will we live in under his leadership?” he said.

The casino ballroom also exposed Buttigieg to Nevada voters who weren’t quite sure what to make of the Indiana mayor until Saturday night. Reade Palmer, 42, said he had never heard Buttigieg speak but left inspired and committed “100 percent” to casting a vote for Buttigieg during Nevada’s caucus.

“I really hope that people will embrace him and look past anything they might disagree with and be reasonable,” he said.

The Human Rights Campaign dinner — attended by about 750 members and supporters — marked Buttigieg’s second visit to Nevada this year. The Navy veteran visited last month and toured Veterans Village after speaking in a suburban coffee shop.

Buttigieg used his platform Saturday to take a swipe at Republican mega-donor and billionaire casino owner Sheldon Adelson, naming him and saying a “real democracy” should be about voters’ thoughts and desires versus “the number of zeroes” in one’s bank account. Adelson donated more than $123 million to Republicans and conservatives in 2018.

The Human Rights Campaign generally does not endorse presidential candidates until the general election. Instead, the organization provides opportunities for candidates to share their messages with voters during the primary election cycle. The HRC Foundation and the UCLA Luskin School of Public Affairs are co-hosting a presidential forum for 2020 candidates in October.

Buttigieg’s historic candidacy and sudden popularity, however, doesn’t mean the LGBTQ community has reached equal footing across the nation, said Chris Sgro, director of marketing and communications for the HRC.

“The field of Democratic candidates and HRC know there is still a tremendous amount of work to be done to win equality from coast to coast,” he said. “That’s why we are fighting so hard to pass the Equality Act right now.”

The Equality Act would update the Civil Rights Act and ban discrimination against LGBTQ people.