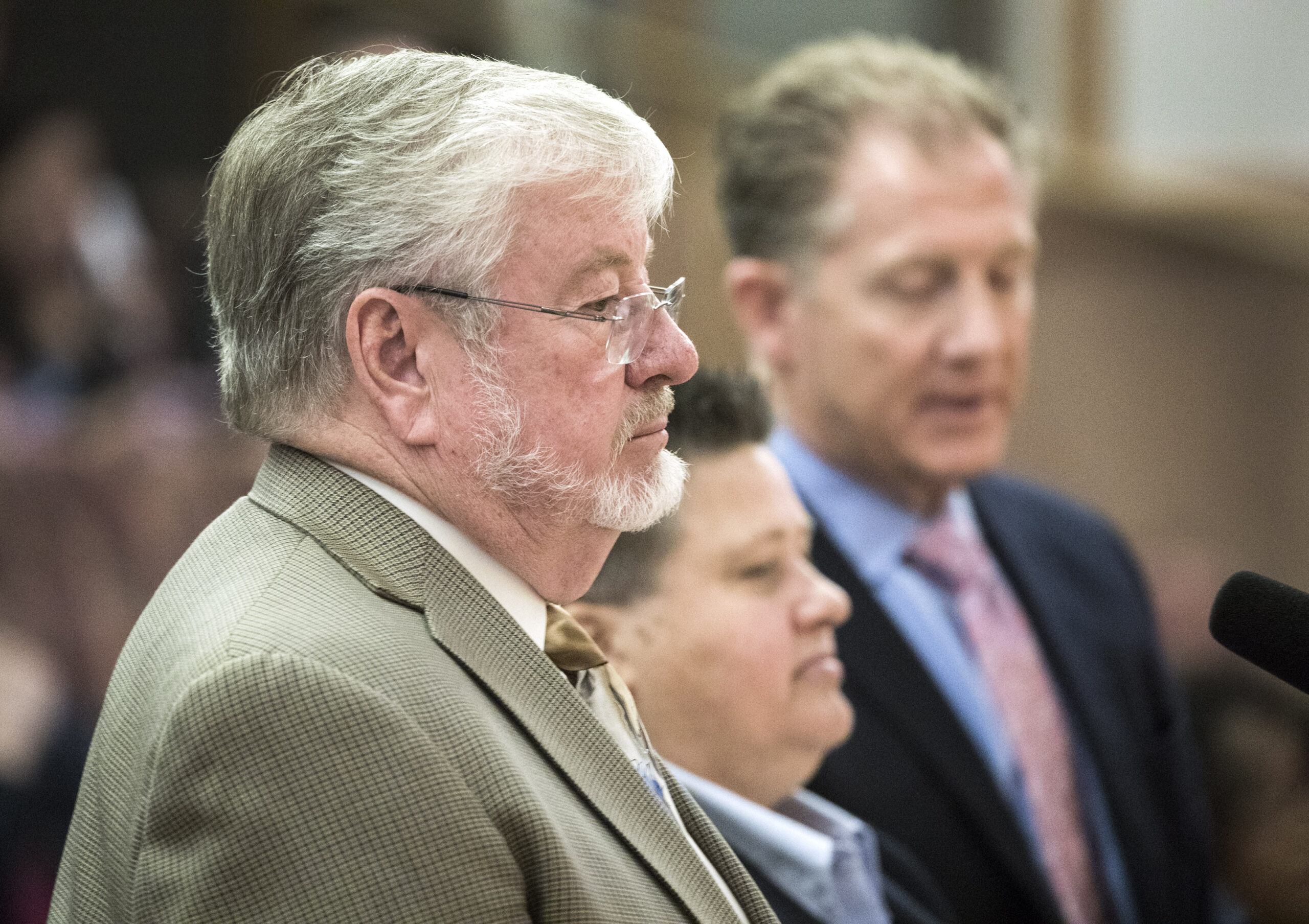 The immediate future of WestCare’s community triage center is no longer in jeopardy after the Clark County Commission on Tuesday approved stopgap funding that will keep the facility open through the end of the year while the county, cities, state and local hospitals develop a long-term solution to the community’s crisis behavioral health-care needs.

The commission, in a 6-1 vote, approved putting up its share of the funding needed to cover $1.5 million worth of uncompensated care provided by WestCare over the last fiscal year, from July 1, 2017 through June 30, 2018. WestCare representatives testified that the city of North Las Vegas committed that it will cover its portion of the funding for the current fiscal year, while county officials said that Henderson has said that it will follow the county’s lead.

Assistant Clark County Manager Kevin Schiller also said that the city of Las Vegas, a fourth local government funding partner, indicated that they would support future funding but still has questions related to WestCare’s data. City of Las Vegas spokesman Jace Radke said in an email Tuesday afternoon that there is no current financial commitment from the city to WestCare.

“The city of Las Vegas is aware of the actions taken at today’s Clark County Commission meeting, and city officials have been actively engaged in meeting with Clark County and the other government entities in the Las Vegas Valley regarding Westcare,” Radke said. “The city continues to reach out to Westcare to meet to go over accounting processes, but that meeting has yet to occur.”

Even if Las Vegas or one of the other jurisdictions decides not to put up their share of the local government funding, Commissioner Larry Brown asked WestCare to promise to remain the county’s partner as they “get through these tough months ahead.”

“That’s a commitment on our part to do that,” said WestCare CEO Dick Steinberg.

The commission also agreed to continue to fund WestCare through the first six months of the new fiscal year — through the end of December — while the funding partners decide how best to meet the community’s long-term need for crisis behavioral health services, including putting out a request for proposals for other companies to apply to be a community triage center. Schiller said that there are currently two companies that are going through the licensing process to be a community triage center and two others have expressed interest in applying.

The Tuesday decision represents the first funding arrangement WestCare has established with Clark County after its last agreement expired at the end of June 2016. Clark County officials have said that they did not renew an agreement with WestCare while they completed an audit of Medicaid reimbursements received by the company.

That audit, released earlier this year, determined that WestCare owed the partners $1 million for uncompensated care services that were actually reimbursed by Medicaid, not the $655,000 that the company had projected. The $1.5 million that WestCare says it needs to keep operating in the current fiscal year factors in the deduction of the $1 million owed to the partners, Steinberg said.

Had the commission not provided the funding to WestCare, its community triage center in downtown Las Vegas would have closed at the end of the month and shifted the burden of care for the patients it treats onto the jails and the hospitals. Schiller said that it would cost the jails between $150 and $160 a day to house those individuals — not including any additional costs for transportation if they need additional psychiatric care — or the county-run University Medical Center (UMC) between $1,500 and $1,800 a day to keep one of those patients in an emergency room bed.

“What alternative do we have? If they close May 31 and they lock their door and there’s no place to take the patients they’re either going to go to the jail ... or they can go to UMC or another hospital or they can be left on the street,” Commission Chairman Steve Sisolak said. “To me, that’s not an alternative. I mean these people need help. You can’t just throw them out on the street.”

Steinberg said that the funding from the local governments, the hospitals and the state will get WestCare’s bank, which has extended the facility a line of credit, behind it again and allow the company to move forward. He said that after 23 months without a permanent agreement between the partners and the funding that comes along with it, the bank told them that it couldn’t continue to back them.

“If we are made whole again for this year and we have a plan moving forward, then we can keep our doors open and move forward,” Steinberg said.

Commissioner Marilyn Kirkpatrick, who was the lone no vote on the proposal to keep funding WestCare, continued to express doubts about the effectiveness of WestCare when it comes to providing care management services to patients as she had at a commission meeting earlier this month.

Based on numbers provided about WestCare, Kirkpatrick said that the community triage center is seeing about 20 people a day who are staying anywhere from 36 and 48 hours and receiving on average 12 “touches” — the term WestCare uses to refer to the different interactions staff have with patients in the facility, anything from taking a patient’s vitals and medication management to discussing with the patient his or her plans for when they leave the facility. Now that WestCare accepts Medicaid, it can bill the insurance program for many of those “touches.”

“We’ve increased the amount of client care each year as we’ve continued to expand what we're doing especially under the requirements of Medicaid,” said Peggy Quigg, WestCare’s executive vice president.

But Kirkpatrick expressed concern that many of those patients may only be staying 24 hours or so, receiving their 12 “touches,” and then headed out the door with no plan in place for what happens to them next. She said that without case management services to try to break the cycle, many of those folks may end up in the emergency room — the same problem that the community triage center was supposed to address in the first place when it opened in 2003.

“For me, policy wise, it's important, dollars are important, but most important is getting people healthy so they can get back into the community to do things well. And it is possible but it takes a long time to get there and you can't do it in three days,” Kirkpatrick said. “So I still have the same questions.”

Giunchigliani, who voted in favor of the WestCare funding, expressed similar concerns, saying that she felt like the services the nonprofit is providing is like a “drive-by touch.”

“‘You came in we touched you, we said hello and now you're moved back out again,’” Giunchigliani said. “I don’t have a good sense of what we’re really providing service wise for these individuals. That's what I'm trying to get at.”

Asked by Weekly whether patients are essentially discharged “to the curb,” Quigg said that 28 percent of clients leave after being referred to outpatient or other supportive services in the community, 10 percent are referred to inpatient behavioral health, 21 percent return to stable living conditions, 2 percent return back to the hospitals, 20 percent return to the streets and 19 percent leave with no specific plan or disclosed information.

Steinberg noted that there hasn’t been a communitywide discussion about what role the triage center should perform — including whether it should provide more of those case management services — since the community came together to create it in 2002. He suggested that some sort of committee could be formed to look into what other services it should be providing.

“The pieces that you're asking about needed to be added in,” Steinberg said.

“Shame on you if 15 years later you're saying we got to to go back and look at it,” Kirkpatrick said. “Shame on you.”

Quigg said that WestCare’s old 4th Street facility in downtown Las Vegas, which closed its doors in November, had both a 50-bed community triage center space and also a 50-bed “step down” unit where patients in need of less immediate help could stay to receive case management services for a longer period time and at a lower cost.

“Our numbers were actually better when we were operating both of those facilities,” Quigg said.

Commissioner Susan Brager said that she thinks part of the challenge for WestCare is that they don’t have that secondary unit anymore, which makes it difficult to ensure that people coming in for crisis care get connected with the long-term services that they need and don’t just end up using the triage center time and time again.

Quigg said that WestCare already submitted a funding proposal to the county to implement a “step down” model instead of just a flat bed rate paid for by the county and the other funding partners, which would allow WestCare to provide those case management services during someone’s second or third day of stay.

“We recognize that’s an important issue and we would like to see the commission address that as well,” Quigg said.