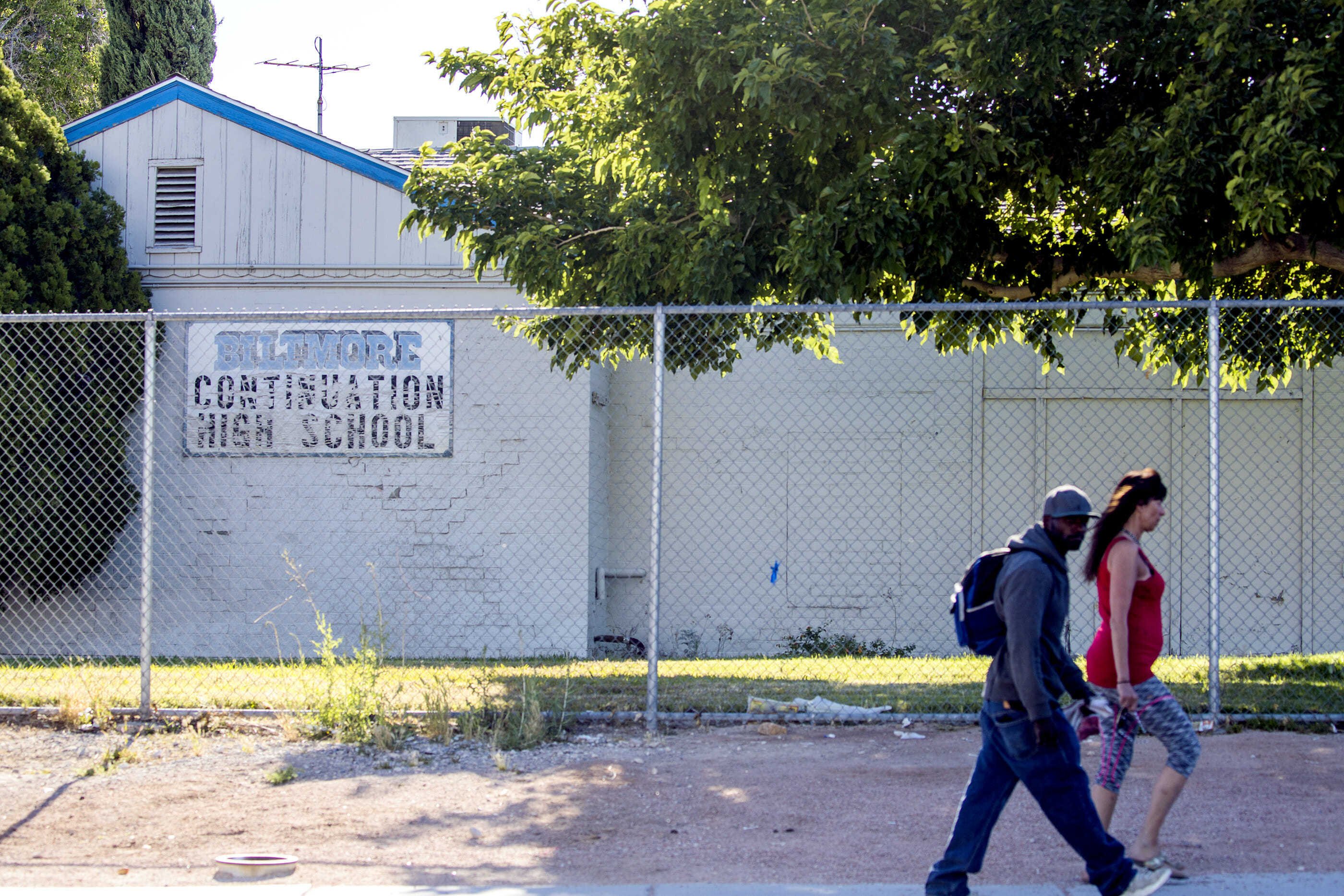 The Clark County School Board of Trustees approved a plan to launch a recovery high school dedicated to helping young addicts stay clean.

A representative from the Caesars Foundation also delivered a $5,000 donation to help fund support services that will be offered at the school.

Associate Superintendent Jeff Horn, who has played a key role in planning the recovery high school, praised the trustees’ decision.

“It’s hard to say no when you see this type of testimony,” he said. “This is great for the community. We are going to save people.”

District officials plan to fold the recovery school into the new budget and present an amended version to the board in June.

But Clark County School District officials think a cosmetic makeover could transform this vacant, aging building near Las Vegas Boulevard and Washington Avenue into a beacon of hope for students overcoming drug addiction. The idea: Create a so-called recovery high school that provides teens a support-filled, fresh start — away from negative peer influences at their old schools who may impede their sobriety efforts.

“We’re at a turning point in society, where, (with) this group of kids that we’re losing, we need to do more,” said Jeff Horn, an associate superintendent within the district.

The plan, more than a year in the making, goes before the School Board of Trustees for a possible vote Thursday evening. It would authorize the district to move forward turning the former behavior school into a recovery high school by the upcoming academic year.

The proposed budget includes roughly $824,000 for staff and $1,500 for student transportation. Horn said it mostly would involve a reallocation of existing resources based on per-pupil funding from the state.

School officials say it’s a small investment that could save the community money down the line by curbing the school-to-prison pipeline. Too often students ensnared in drug use seek treatment but fall back into their old habits upon returning to school.

It’s a cycle, they say, that can lead to students dropping out of school, increasing their risky behaviors, committing crimes, going to prison or winding up dead from drug-related overdoses or accidents.

“Drugs are not in back alleys,” said Joe Engle, president of the Las Vegas chapter of There Is No Hero In Heroin (TINHIH), which has been involved in the planning process. “Drugs are easy to get in high schools.”

The proposal calls for enrolling as many as 100 students — referred by parents, counselors, treatment centers and the juvenile justice system — who are recovering from drug addictions and need an environment that fosters a sober lifestyle, Horn said. The four-year recovery school would be just like any other high school in terms of academics, but it would also boast programming and supports designed to keep students on a clean path.

For instance, the school district plans to partner with community organizations to create an alternative peer group, which is essentially programming beyond normal school hours to keep students engaged in healthy activities that promote recovery. Aside from two community health workers paid for through an AmeriCorps grant, the alternative peer groups would rely on community volunteers to carry out the extra support services.

The recovery school also would require family involvement in counseling and student participation in random drug tests. The latter isn’t meant to be punitive but rather a means to address any relapses, Horn said.

There will be no cost for students to attend the recovery school. Pending space, the school would be open to any Clark County student in grades nine through 12 recovering from drug addiction. The district hasn’t formalized an admittance process, given that the concept still needs trustees’ approval.

Horn said he believes the positive environment will be a game-changer for students trying to overcome their addictions, whether it be to alcohol, marijuana, prescription drugs, heroin or other substances.

He knows firsthand the importance of a supportive peer group. Horn battled addiction in his early 20s but entered a recovery program and has been sober ever since then.

“People come together and realize they’re not alone,” he said. “It’s a powerful tool when that happens.”

The recovery school proposal isn’t indicative of an out-of-control drug problem among Las Vegas teens. Data suggest the state’s teens use illicit drugs at rates fairly consistent with the rest of the nation.

The Substance Abuse and Mental Health Services Administration found that, in Nevada, 9.6 percent of young people ages 12 through 17 reported using illicit drugs in the month prior to being surveyed in 2013 and 2014. The national average was 9.1 percent.

The problem here, local officials say, is the lack of services for those who are addicted.

“Unfortunately, Las Vegas has very little treatment and recovery support services in comparison to other cities its size,” she said. “There’s just not as much as we need.”

That’s why Ross thinks a recovery high school would provide a much-needed addition to local prevention efforts. Although not a treatment center, it stands to help more young people stay sober and lead productive lives, especially at a time when Las Vegas, like the rest of the nation, tries to get a handle on the opioid epidemic.

Engle, whose 19-year-old son Reese died from a heroin overdose in July 2011, suspects the recovery school would serve a large number of students overcoming opioid abuse. As his family knows all too well, it’s an incredibly difficult drug to quit. His other son, who also battles a heroin addiction, recently re-entered recovery after a brief relapse.

If approved, Las Vegas would join a host of other cities across the country that have recovery schools. There are 36 recovery schools operating in 14 states, according to the Association of Recovery Schools. The majority of those are private or charter schools.

Clark County’s possible development of a public recovery high school would be a “huge win” for the movement, said Hugh Guill, a former new schools coordinator for the Association of Recovery Schools and current board member for Archway Academy, a recovery high school in Houston.

“It’s really exciting when truly public schools come into the mix because you’re able to help out a lot of young people who may not have the resources to get other help on their own,” he said.

Still, recovery high schools don’t magically absolve students of their addictions. They’re simply another way to promote sobriety — and, as far as organizations like the PACT Coalition are concerned, that’s reason enough to support the initiative.

“I don’t think any of us are delusional to think that no one who goes to this recovery high school will ever use again,” Ross said. “But the hope is that this will be a place where if you want to recover and want to stay sober, you can.”

Disclosure: Caesars Entertainment has donated to The Nevada Independent. You can see a full list of donors here.
SHARE
Comment Policy (updated 4/20/2021): Please keep your comments civil. We reserve the right to delete comments or ban users who engage in personal attacks, use an excess of profanity, make verifiably false statements or are otherwise nasty. Comments that contain links must be approved by admin.