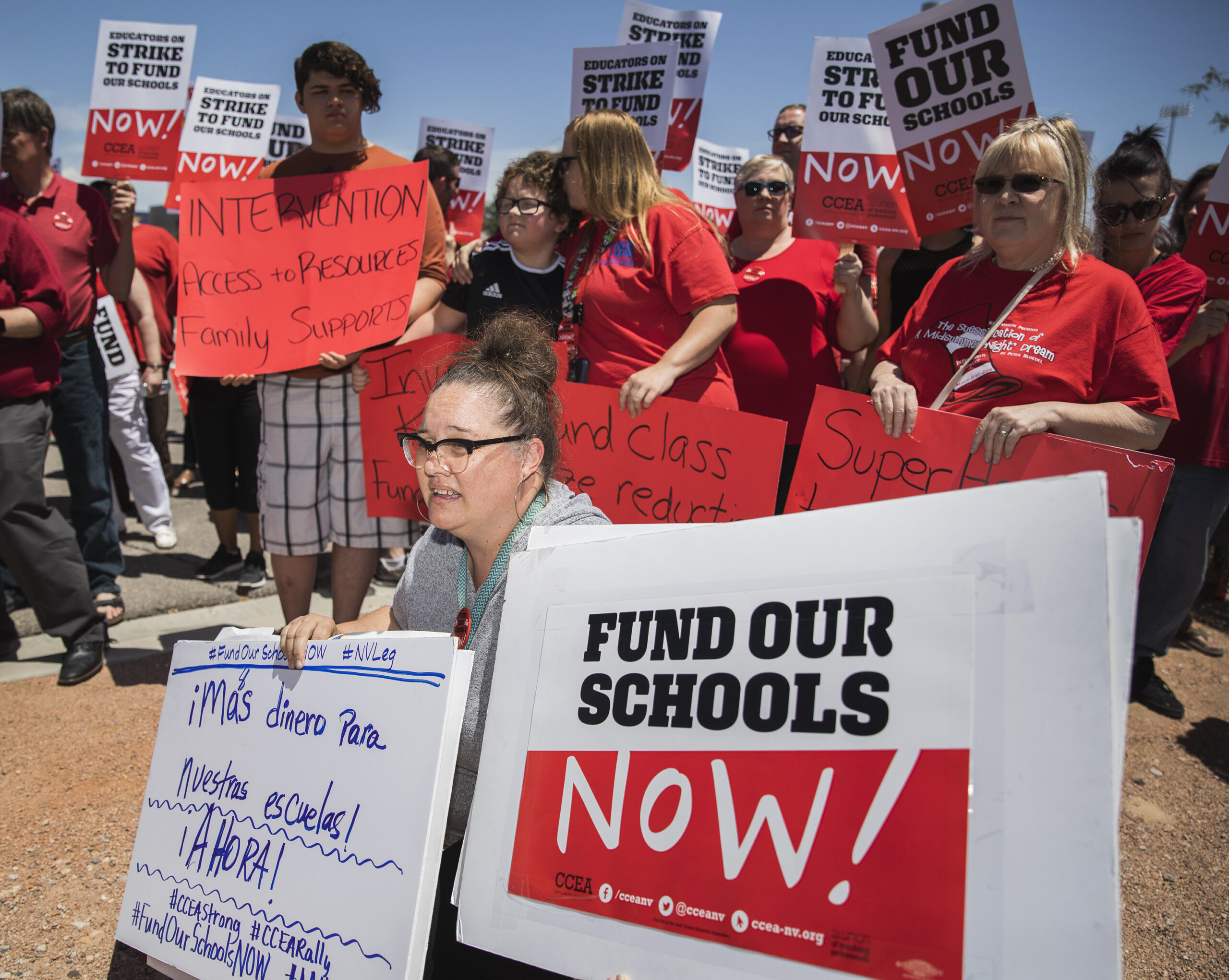 The teachers’ union sent an email to educators Tuesday morning announcing its plans, following weeks of increased tensions between the two parties. Last week, CCEA rejected a contract offer from the school district, which included a 3 percent pay increase this year, step pay increases for eligible employees in the 2019-2020 and 2020-2021 academic years and a 4 percent increase in the district’s contribution to the medical plan for those two years.

Union officials said the district’s offer didn’t go far enough because it only included financial incentives already promised by the governor and legislative leadership. The union has called for pay increases tied to so-called column movement — which refers to a teacher’s advancement based on completed professional development — among other demands.

“On August 23, 2019 if there is no change in CCSD’s offer then CCEA will mobilize for the first strike action to take place on September 10, 2019,” the email states. “The strike date will give parents ample notice to make arrangements for their students. The data will also provide educators across the district time to organize.”

CCEA has threatened to strike since the spring, despite teacher strikes being illegal under Nevada law. The union backing a strike could be subjected to daily fines reaching $50,000 and participating employees could be suspended or fired.

It’s unclear how many teachers would walk out. CCEA is the larger of two teachers’ unions and the official bargaining unit, although not every teacher is a dues-paying member.

John Vellardita, the union’s executive director, declined to speak with The Nevada Independent.

The strike threat hasn’t garnered support from other employee unions, which received the same contract offer from the school district.

The Education Support Employees Association released a statement Tuesday saying it does not support or encourage its members to participate in a strike. ESEA, which is the largest local affiliate of the Nevada State Education Association, is working on “finalizing the pay and benefits increased” promised by Gov. Steve Sisolak during three more scheduled negotiation sessions with the school district, union officials said.

“We expect to settle a contract with the District via the bargaining table; and not in the streets,” ESEA’s president, Virginia Mills, said in a statement.

“The current strike threat could harm our kids and communities while doing little to alleviate our overcrowded classrooms or create opportunities for our students,” NSEA’s president, Brian Rippet, said in a statement. “NSEA remains committed to putting our kids first and problem-solving with key education stakeholders to ensure a quality education for every Nevada student.”

Stephen Augspurger, executive director of the administrators’ union, said his organization doesn’t support a strike in “any way, shape or form.” The Clark County Association of School Administrators and Professional-Technical Employees has had one negotiating session with the district with another planned for later this week.

He cautioned the school district against singling out one bargaining group for a better contract proposal.

“If one bargaining unit receives a disproportionately higher share, that not appropriate,” Augspurger said. “We would expect to be treated in the same fashion.”

The looming strike threat, however, has caused unease among principals, he said. The head of the administrators’ union faulted Superintendent Jesus Jara for not addressing the strike possibility sooner and forming contingency plans centered around student and staff safety. He also questioned why Jara hasn’t pursued court intervention to stop any impending strike.

Jara’s decision to eliminate deans — which he later reversed — fractured his relationship with the administrators’ union this summer. After Jara restored those positions, middle and high schools were forced to cut their budgets by $98 per student.

Augspurger said Jara should have been discussing the strike potential with administrators this summer and figuring out logistics, such as how many long-term substitutes would be needed and how to get them fingerprinted and approved for duty.

“That time has come and gone,” he said. “We don’t have enough time to put that kind of plan in place.”

Jara pointed to the district’s ongoing fiscal challenges for why it can’t meet CCEA’s demands.

“A strike must be prevented. We agree that teachers deserve more pay, which is why we are offering a 3% raise, a step increase and contributing 4% towards medical for all their tremendous work,” Jara said in a statement. “The total for those increases is approximately $69 million, therefore an additional request cannot be met with an approximate $35-million-dollar forecasted deficit for the biennium. To that end, a compromise must occur to ensure our student’s academic progress isn’t interrupted.”

School district officials say the Legislature came close — but still short — of meeting their financial requests. Jara announced a $17 million deficit for the current school year (and roughly $35 million over the biennium) shortly after sine die.

CCEA continued to monitor the district’s budget situation while never fully backing away from launching a strike. If Clark County teachers do strike, they’ll be joining thousands of educators across the country who have taken to the streets in recent years to demand better pay, improved working conditions or a combination of both.

District officials said the human resources office is “working diligently” to ensure the necessary number of substitute teachers should a strike materialize. Per that effort, the district is waiving the cost of fingerprinting for substitute hires. They’re also calling on retired teachers, local universities and philanthropic organizations to help with staffing if necessary.

“No child will be turned away from our District,” Jara said in the statement. “All doors will remain open, regardless of any decision by union leadership.”

Sisolak responded Tuesday to the strike threat during the Tahoe Summit and expressed optimism the situation could be avoided. The governor also said he hadn’t spoken to school district or union officials in the last two days.

“Education has been and will continue to be our number one priority,” he told reporters. “I think that everyone needs to step back and keep in mind that the most important things that we are dealing with here are teachers and the kids that they are educating. And when you put that in perspective, I’m hopeful they’ll be able to come to some kind of agreement.” 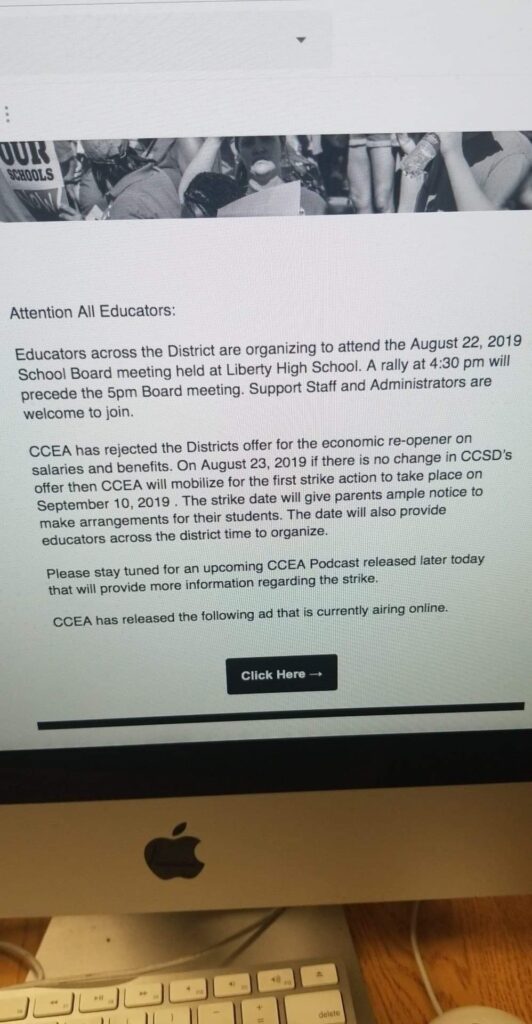 This story was updated at 2:10 p.m. and again at 5:07 p.m. to include more information and reactions.