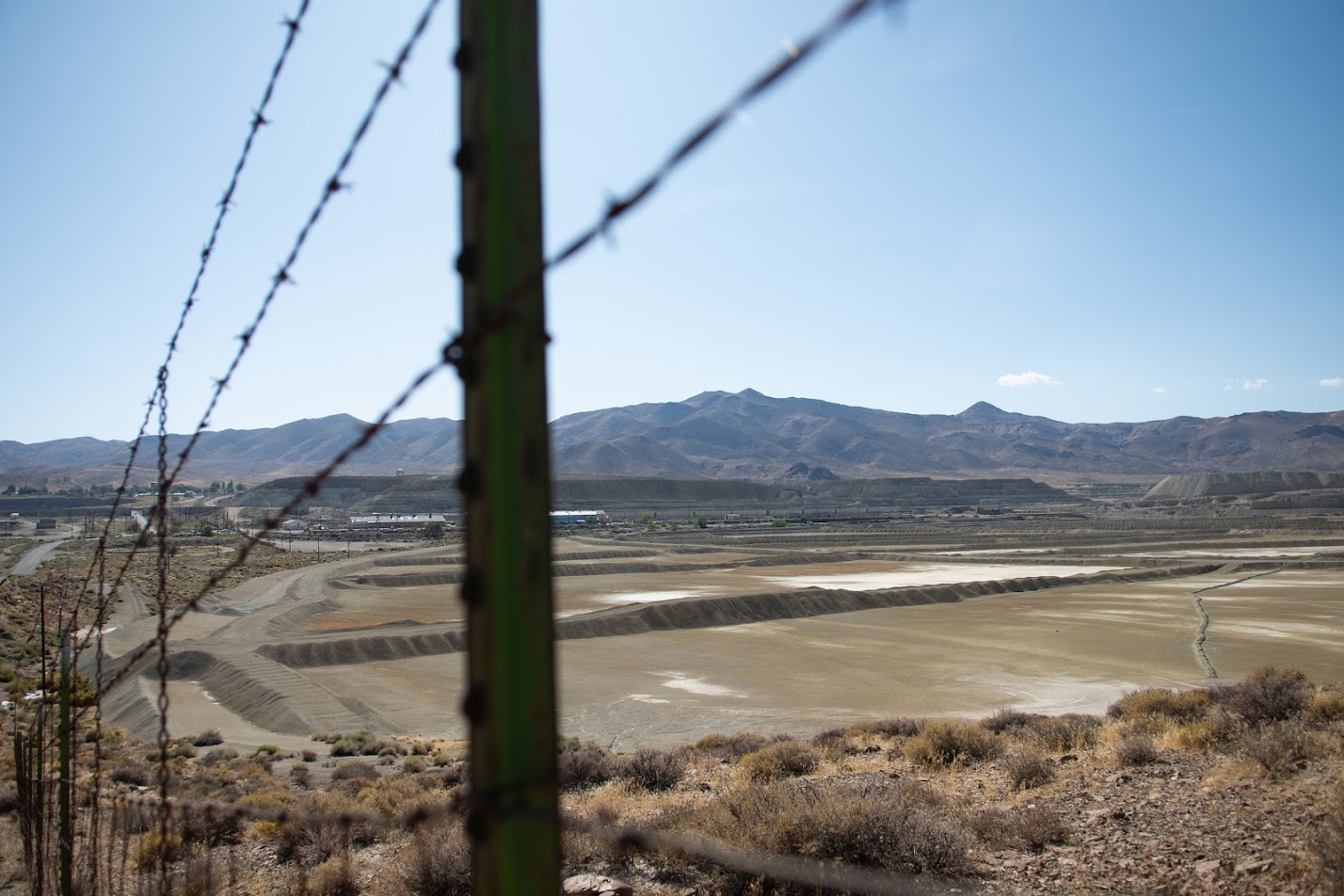 An effort to privatize public land at the former Anaconda Copper Mine in Yerington would leave the federal government with little oversight over a massive cleanup led by state regulators who have faced criticism for relying on company data to assess an aquifer with high uranium levels.

A previous effort to privatize the land, brought forth in Congress, died at the subcommittee level in 2018. Similar legislation, introduced in 2019, has not received a hearing. Both bills proposed to transfer public land from the U.S. Bureau of Land Management (BLM) to the Atlantic Richfield Company, better known as ARCO, the entity responsible for cleaning up the contaminated mine.

Now ARCO is looking to acquire about 2,000 acres of public land through an administrative process.

State officials and the company have suggested that such a land transfer would speed up the cleanup and make it more efficient. But some, including Sen. Catherine Cortez Masto, have expressed concerns about how a land transfer could affect oversight and tribal governments.

Lauren Wodarski, a press secretary for the Democratic senator, said Cortez Masto is engaging on the state level and “continues to have concerns with the proposal to convey contaminated federal land to a private entity without the appropriate transparency and oversight.”

Federal rules for operating on public land are strict and require public involvement. The state, which is leading the cleanup, does not have the same requirements. If the land became private, the BLM confirmed, it would no longer comment and sign off on decisions made at the site.

Gov. Steve Sisolak’s office declined multiple requests for comment. But the Nevada Division of Environmental Protection (NDEP) said that it had no oversight concerns should the land transfer go through. In 2018, NDEP wrote a letter supporting the goals of Amodei’s land transfer bill.

In emailed responses to questions, an NDEP spokesperson said the state “does not have any concerns regarding oversight of [cleanup] actions whether the land is on private or public land.”

The federal agency routinely identifies public land that is suitable for "disposal" through sales, transfers or exchanges with private entities or local governments. Before the Anaconda land is transferred, the BLM plans to conduct an environmental analysis and opportunities for the public to weigh in.

An ARCO spokesperson confirmed that the company “is seeking to acquire land currently held by the Bureau of Land Management (BLM) that they have officially designated for disposal.”

“By consolidating ownership, a more effective and secure site-wide remedy can be achieved and BLM can resolve its liability,” ARCO’s statement said. “The BLM parcels will provide a source of fill and cover material necessary to implement” plans to remediate the mine site.

But watchdog groups worry such a transfer could eliminate the federal agency’s oversight of the state-led cleanup. As a landowner with potential liability, the BLM offers a regulatory check.

As recently as July, technical experts hired by the BLM pushed back on NDEP, questioning whether a state-approved report of groundwater pollution relied on “good science.” The report, which largely relied on ARCO’s science, reduced the scope of contamination tied to the mine.

“It's definitely concerning to have an additional oversight agency walk away from the project,” said John Hadder, who directs Great Basin Resource Watch, which monitors mining projects.

Republican Rep. Mark Amodei, who authored the congressional legislation to privatize the land,  said the BLM would and should continue to play a role in the cleanup and the decision-making.

“I certainly wouldn’t expect to wake up one day and have somebody say, ‘you don't get to say anything about it, BLM,’” Amodei said in an interview. “They’re a cooperating agency at least.”

But BLM spokesperson Lisa Ross said that, once transferred, “the lands would then be under private ownership and BLM would have no authority over the management of those lands.”

A land transfer could also make it harder for two Native American tribes affected by the legacy mine and its contamination to raise their concerns. The BLM, as a federal agency, has a legal duty to consult and collaborate with tribes. The state does not have the same responsibility.

"They don’t want to have to consult with the tribes or hear our thoughts and recommendations,” said Amber Torres, chairman of the Walker River Paiute Tribe, which is involved in the cleanup.

“Even if they brought us to the table to consult, they don’t have to honor anything.”

Wodarski said that Cortez Masto wanted to ensure tribal governments are at the table in the decision-making process.

“The senator wants to ensure that the impacted parties are fairly compensated and local communities and tribal governments are being given a voice in decisions that could alter the federal government’s remediation responsibilities,” Wodarski said in a statement.

State officials have not communicated a consistent position on the land transfer. When asked this month whether NDEP supports the land transfer, a spokesperson said “NDEP does not have a stake in the potential land transfer.” But NDEP has supported such efforts in the past.

In a 2018 letter to Amodei, NDEP Administrator Greg Lovato wrote that the state “supports the goals” of his legislation, which aimed to privatize the land. When asked to reconcile its past and present statements, NDEP sent an updated statement that appeared to support the transfer:

“NDEP does not have a formal position, for or against, either legislative proposal authorizing the land transfer. However, NDEP remains generally supportive of the broad goal of both bills as it relates to enhancing and facilitating the efficient, effective clean-up at the Anaconda site.”

Lovato also discussed the reasoning behind privatizing the land in a recorded interview last year. He did not state a position, but Lovato said that the BLM’s rules “can be cumbersome.”

Lovato, in explaining why the company was pursuing the land transfer, said that “it’s one thing to permit a new mine or operate something on public land. But to clean up a property, you’re kind of in a different realm. You’re not trying to make money. You’re just trying to get this done.”

“But,” Lovato continued, “BLM’s processes for operating on public land can be cumbersome, even if you are just trying to clean it up. So Atlantic Richfield’s effort is to consolidate all the land under their ownership so they are just dealing with one regulatory agency and that’s NDEP.”

Environmental advocates argue that it is the federal government’s exhaustive rules that strengthen, rather than impede, the cleanup and protect against contamination in the future. One company is actively looking to re-mine mineral deposits at the contaminated site. If the land is privatized, Hadder worries future mining could become exempt from an environmental review.

Activities on public land must comply with the National Environmental Policy Act (NEPA). The act requires federal agencies conduct exhaustive environmental reviews before any agency can approve new development on public land. Nevada does not have an equivalent state-level law.

“If it’s all private and there is no need for a federal agency action, that means that re-mining of the site would fall outside of NEPA,” Hadder said.

In the short-term, Hadder said that privatizing the land could mean a further reduced role for the federal government, which has already backed away from the cleanup. In early 2018, the EPA deferred its responsibility for the cleanup to NDEP. In practice, the “deferral agreement” meant the federal agency would no longer provide formal technical input on most decisions at the site.

"One of the concerns that was raised when they were first talking about the deferral agreement is the state agency would not have the necessary capacity to hold the company accountable, said Ian Bigley, a mining justice organizer for the Progressive Leadership Alliance of Nevada.

If the BLM no longer has a stake in the cleanup, it could mean one less regulator reviewing the science. Bigley said that could leave ARCO “able to set the conversation on their own terms.”

In at least one instance, NDEP has allowed the company to revise modeling in its favor.

After the EPA deferred its oversight to NDEP, state officials accepted new science from ARCO and approved significant revisions to an EPA-accepted report. The revised report minimized the scope of the mine contamination in a groundwater aquifer tainted with uranium and sulfate that flows below agricultural fields, residences and toward the Yerington Paiute Tribe’s reservation.

Even before NDEP approved the report in May, technical experts had raised serious concerns.

In late 2018, consultants for the Yerington Paiute Tribe said NDEP “failed to notify” the tribe that it was allowing ARCO to submit a new scientific analysis. The consultants, in comments to a draft report, said NDEP had not held any technical meetings to vet the science, as EPA had.

Sisolak’s office did not comment on his administration’s approval of the revised report.

For more background on the Anaconda cleanup, please read our three-part series on the issue.