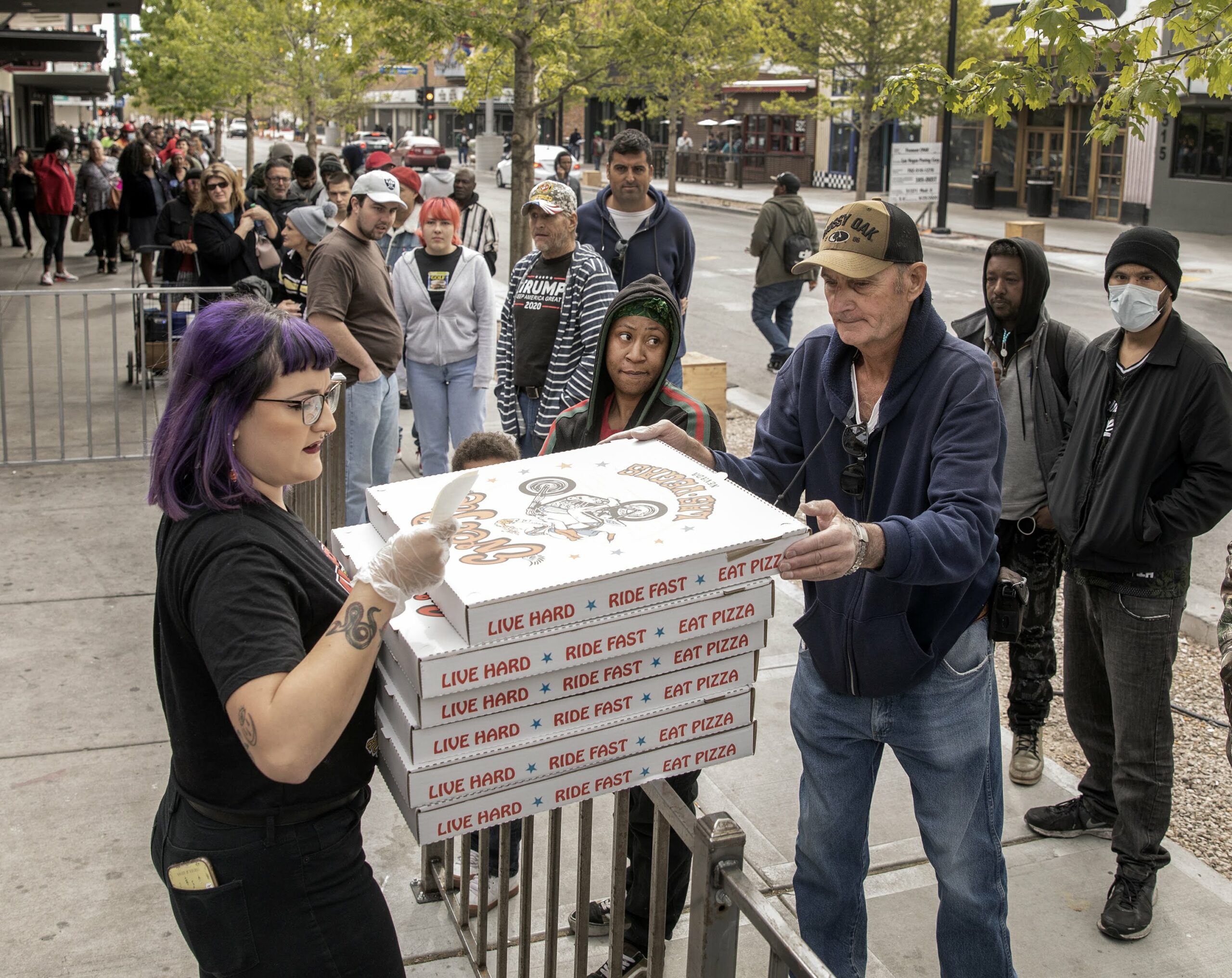 Rather than opening its doors to customers during its final hours of operation Wednesday morning, rock-and-roll pizza shop Evel Pie on the corner of Las Vegas Boulevard and Fremont Street gave out more than 300 pizzas free of charge to the downtown homeless population.

The shop is among the “non-essential” businesses closing for 30 days at the request of Gov. Steve Sisolak as a result of COVID-19. Sisolak announced Tuesday night that businesses should be closed by noon Wednesday. With such short notice, Evel Pie was left with an excess of ingredients, and co-owner Brandon Powers decided to use the dough for those less fortunate.

“We had perishable food, and we didn’t want to just throw it away if we could help people affected by this shutdown,” said Powers. “In times like this, the people must band together to get things done. We encourage all restaurants to do the same.”

As cases of COVID-19 have proliferated, advocates have raised concerns about how the estimated 7,169 people experiencing homelessness on any given day in Nevada will fare when shelters are cutting back on services to minimize contact with people during an outbreak that threatens those living in close quarters, the elderly and people without access to facilities to properly clean themselves.

“These are a group of folks who, oftentimes, don't have a voice, and so they're not the ones who are reaching out to electeds, they aren't the ones who are posting on social media,” Reno City Councilman Devon Reese told The Nevada Independent in an interview on Wednesday. “And not only that, how do we keep the folks who are working [in nonprofits] safe as they go about their efforts to work within the population of vulnerable people?”

Service providers have modified operations to try to prevent the virus from reaching the homeless population, of which more than half have reported pre-existing medical conditions. About 14 percent of 352 people who responded to a survey in January 2019 reported that they were 60 years or older, an age group vulnerable to the virus.

In light of the pandemic, the Nevada Homeless Alliance reduced its Project Homeless Connect distribution pop-up event on Tuesday to showers and food distribution instead of its usual range of services including housing information, haircuts, health care benefits and legal aid support.

Despite these efforts in and among service providers, Catholic Charities of Southern Nevada said on Wednesday that an employee had tested positive for the virus.

A statement given by a representative of the nonprofit said that the organization immediately contacted the Southern Nevada Health District and is following all recommendations, but the health district has not recommended closing the shelter at this time.

“Individual employees who may have been in contact with the identified individual have been notified as to any requirement for self-quarantine,” the organization said. “(Catholic Charities) will continue to pay the employees who fall into this category.”

Catholic Charities is one of many homeless and social service centers located in the so-called Corridor of Hope in downtown Las Vegas. It is situated directly across from The Courtyard Homeless Resource Center, a city-funded facility that reports a sleeping capacity of 450 people per night in its open-air facility.

The limited space at the .6-acre Courtyard makes it nearly impossible to follow Centers for Disease Control and Prevention recommendations for emergency shelters to place beds and sleeping mats at least six feet apart. City officials do not plan to reduce occupancy at the Courtyard in order to prevent spread.

City spokesman Jace Radke said that the shelter has made clean restrooms and washing facilities available, as well as other key components identified by the National Healthcare for the Homeless Council. He added that next week, staff will begin taking temperatures of those entering the Courtyard as a screening measure.

“If someone is sick or shows signs of being ill, we ask that they visit a doctor. In addition Las Vegas Fire and Rescue emergency medical technicians are available to check on Courtyard guests,” Radke said in an email on Wednesday.

The Nevada Homeless Alliance submitted a petition to elected officials on Monday urging them to enact an immediate moratorium on all camping bans, which exacerbates crowding in emergency shelters and in the Courtyard and limit options for self-quarantine.

However, the city of Las Vegas continues to enforce new ordinances that make sleeping or camping downtown a misdemeanor crime if space is available in a shelter, and allow fines or arrests for people obstructing “street cleaning” during designated hours. Critics have accused both ordinances of “criminalizing homelessness.”

Radke said there have been no arrests or citations in connection with the encampment ordinance, which went into effect in February.

On the other hand, the city of Reno suspended homeless camp cleanups for the next 30 days in alignment with Gov. Sisolak’s timeline for non-essential business closures during the epidemic. In addition, city officials postponed the Reno Works program, an initiative offering full-time employment assistance along with life skills education. ReStart Nevada, an organization offering mental health support and crisis intervention as well as other services for homeless and at-risk individuals, has also canceled in-person visits, now operating only via phone.

The homeless shelter in Reno has responded to the pandemic by temporarily ceasing street outreach and is monitoring residents for signs of illness. Outreach monitors check everyone in at the shelter’s gate and are logging the names of people entering and leaving along with the times they do so.

Susan Cameron, a caseworker at Catholic Charities of Northern Nevada and the St. Vincent’s Programs, said the food pantry is handing out food and basic resources such as clothes and blankets to clients, but is having people come in one at a time. She added that she has been assisting callers over the phone, but the offices are closed to the public.

“[The shelter] resource center has limited services to just mail, so I have heard that clients can no longer use the phones to make calls, and unfortunately other closures like public libraries have further limited resources for clients,” Cameron said. “Many homeless individuals don’t have access to updated information, which is causing more anxiety and frustration for clients.”

Diaz Dixon, the executive director of the Eddy House, a center offering support for homeless and at-risk youth ages 18 to 24 in Northern Nevada, said he and his staff have been increasing sanitation, telling non-essential staff to work from home and reducing working hours but maintaining the same level of pay.

“What we're trying to do, first and foremost, is make sure that we keep calm and that we educate our clients and our staff as much as we can,” he said, noting that the staff is having residents sleep head-to-toe and the shelter is at maximum capacity possible while still maintaining distance guidelines recommended by the CDC.

Dixon’s greatest concern is providing food for the youth because the Eddy House often receives donations of food from restaurants and volunteers who are now hunkering down because of the virus.

Even though the shelter has not yet had to turn away any youth, Dixon said he’s fairly certain that the day is “right around the corner.” If youth are unable to stay at the house, they will have to rely on other shelters.

For now, he said the young people staying in the shelter are adjusting to the social distancing guidelines.

“They're in a place that's safe versus being out on the streets and dealing with the unknown,” Dixon said. “We are hoping that all of our partners don't have any major issues that come up too soon because they're all valuable resources and jointly we put together a halfway decent network that [young people looking for shelter] can access.”

Other service providers have taken it upon themselves to do what they can to prevent infection.

Tim Doss, the coordinator for the Reno Hope Bus, a nonprofit providing low-income and housing insecure populations with goods and services, said he has adjusted his deliveries to comply with CDC recommendations.

“Before, people would be able to step into the bus and look for what they need. Now I'll go wherever everybody is and drop stuff off and then drive off,” he said. “So there's no shaking hands or saying anything.”

Doss said he is worried about members of Reno’s homeless population lacking adequate resources, especially those located outside of the city center, relatively far from support.

“I don't want to say I'm not worried about the virus, but I'm worried about people not eating because the worst feeling in the world is not having anything within the refrigerator,” he said.

Reese said city officials have been meeting with community partners, advocates and other groups to discuss ways to protect Reno’s most vulnerable populations. He said discussions have included using spaces in casinos and hotels for homeless populations, creating medical triage centers with shipping containers and providing services to those most at risk.

“Which of those ideas stick or not, I think in some ways will depend on the trajectory of the crisis,” Reese said. “If we flattened the curve of course as quickly as we are able to do, then some of the options which may seem to others to be bigger or heavier lifts or that sort of thing, may not be needed.”

Although he was not sure what steps the council would be taking next, Reese said city officials are planning a donation drive to supply homeless and at-risk residents with essentials such as toilet paper, cleaning supplies and hand sanitizer. He added that he and his staff are also creating a way for people to volunteer, and the city is looking to other municipalities for ideas.

Cities outside of Nevada have been enacting various initiatives to prevent the virus from affecting their homeless populations. The Los Angeles City Council passed several measures on Tuesday, including temporarily stopping enforcement of a law that requires tents to come down during the day and instructing city agencies to provide weekly shower services at “major” homeless encampments.

The city of Dallas opened a temporary shelter on Sunday to help those displaced from existing shelters, because of the need to reduce occupancy to ensure social distancing. In Denver, the public health department is supplying wellness packages to homeless people that include vitamin C, hand sanitizer and information sheets with emergency contacts and maps of public hand-washing stations.

Dixon and Doss both noted they have been seeing fewer and fewer donations.

“Compared to 100 percent giving, it's down to 10 percent,” Doss said. “I think everybody's scared … There's less people on the street, less people to pass out money or food or anything.”

Dixon noted that if people feel uncomfortable giving their time, they can make financial donations to help the organizations addressing the crisis.

“The best way people can support us obviously is financial,” he said. “If there's anything they have to donate to go towards operations and client services, great. If they've got the ability to help towards meals, breakfast or dinner and get plugged in on our schedule, those are wonderful opportunities as well.”

Reese said he has seen concerned citizens offering each other support ranging from babysitting services for parents who are still working while schools are closed to sending out a call for donations to help those in less fortunate situations. He believes people will start contributing once they are less afraid.

“It may be that in the last five to ten days, people have been unsure,” he said. “So I fundamentally believe that it is just a momentary taking of inventory, and now we're about ready to see our community come together like wildfire.”