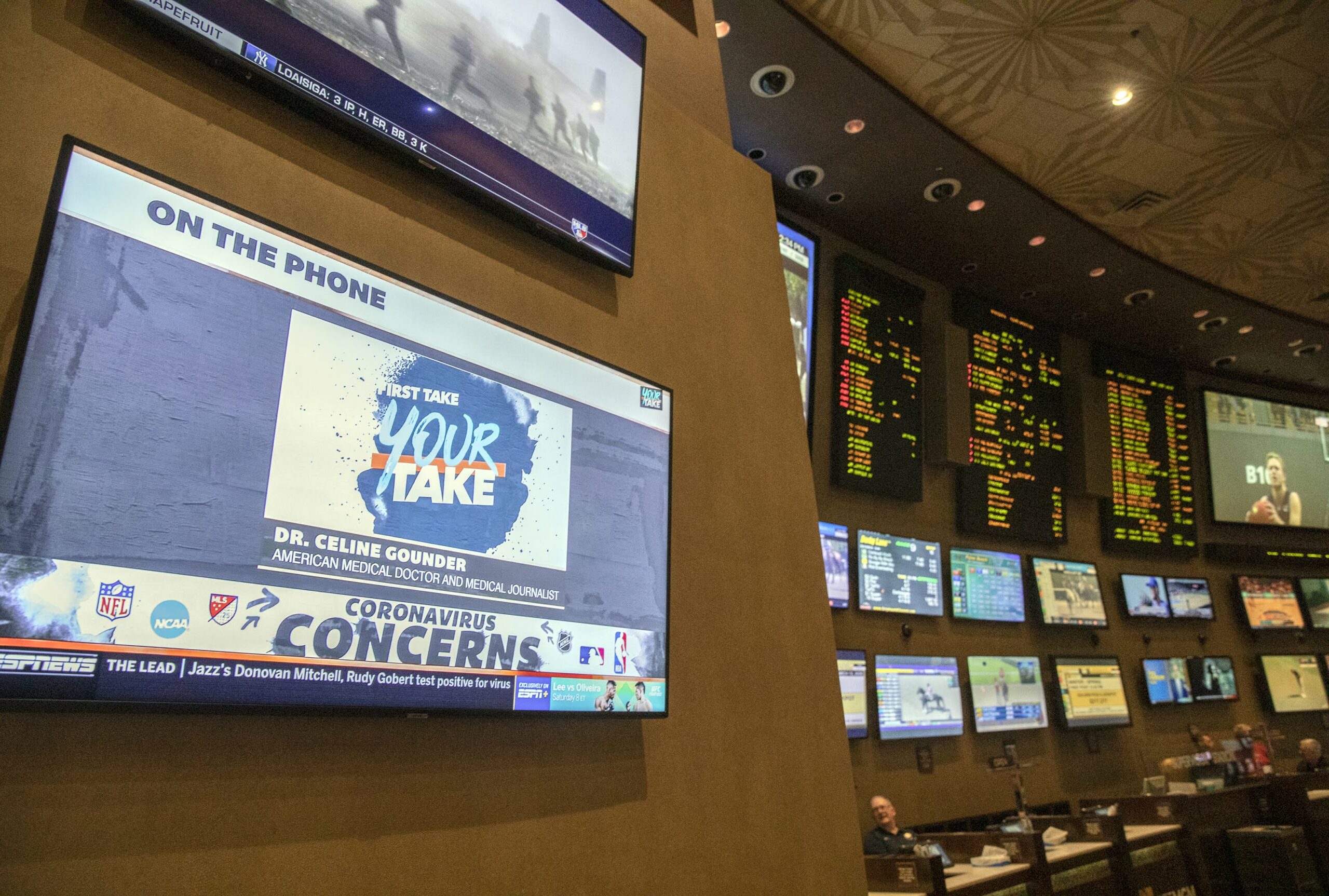 It’s going to be a quiet few weeks inside Nevada’s sportsbooks.

The cancellation of the NCAA Men’s and Women’s College Basketball Championships on Thursday – better known as March Madness – added to the financial burden heaped onto the state’s resort industry by the coronavirus outbreak. Domestic and international travel to Las Vegas has diminished and large conventions have been canceled.

Without the busy four days of March Madness, coronavirus will take another big chunk out of the state's $5 billion a year sports betting industry.

Between Wednesday night and Thursday morning, the NBA, NHL and Major League Baseball put their seasons on hold for indefinite periods as concerns over the spread of the virus made large-scale events a potential hazard. Late Thursday afternoon, the upstart XFL, which gave football bettors a reason to visit the sportsbooks, suspended the remainder of its inaugural season.

Gaming analysts have often said the first four days of March Madness rival the betting activity on the Super Bowl as the biggest event annually for sportsbooks. This year’s Super Bowl wagering hit a near-record $154.7 million.

Nevada gaming regulators don’t break out March Madness betting totals in reports. But to give some perspective, the state took in $498.7 million in basketball wagering – combined college and professional – in March 2019. Several analysts said the vast majority of the total was on college basketball.

“We really have entered uncharted territory,” said William Hill U.S. CEO Joe Asher, whose company operates more than 100 sportsbooks and sport betting kiosks throughout the state. “The difficulty is we just don’t know how long this will last.”

For Nevada casinos, particularly those in Las Vegas, March Madness is more than just an opportunity to place some college basketball wagers.

The opening four days of the tournament – which were scheduled for next week – meant large crowds of both tourists and local residents spending many hours at their favorite casinos, oftentimes gambling on table games and slot machines and spending money in restaurants and at other entertainment venues.

“From a business perspective, the timing was not good,” Asher said. “I spoke with employees today. Obviously, this too shall pass. We’ve been focused on building this business five to 10 years down the line. This is something we will have to manage through.”

Sports betting has continued to flourish in Nevada in recent years, despite competition from 15 other states. In 2019, Nevada sportsbooks took in a record $5.319 billion in wagers, the 10th consecutive year for increased sports wagering total. In 2019, sports betting accounted for $329.1 million, or roughly 3 percent, of the state’s $12 billion in total gaming revenue.

In a statement released by MGM Resorts International, CEO Jim Murren said coronavirus has reduced broader travel demand in Las Vegas and across the globe.

“As a result, our domestic resorts have been impacted in the near term, primarily driven by increased cancellations in our hotel and convention bookings in Las Vegas, particularly during the months of March and April,” Murren said.

Strip hotel room rates have been dropping over the past two weeks.

“We are also now seeing material sequential declines from April until late May, down now 15 percent to 59 percent, versus last week’s 1 percent to 8 percent (drop),” Jonas said.

Global Market Advisors Partner Brendan Bussmann said the resort industry is adding up lost revenues on room night cancellations, and not just from the loss of the tournament.

The National Association of Broadcasters, which cancelled its April conference, would have brought 90,000 visitors to the city over a five-day period.

“The way this is playing out, we're starting to see another 9/11,” Bussmann said, referencing how the terrorist attacks in New York, Washington and Pennsylvania in 2001 caused the airlines to shut down for four days and sent Las Vegas visitation and gaming revenues plummeting.

It took more than a year for the resort industry to recover.

“We’re starting to see a lot of empty seats on planes and fares are down,” Bussmann said. “We will see how this plays out.”

“We understand and respect NCAA’s decision to suspend its basketball tournaments,” Nelson-Kraft said. “We recognize this difficult decision by the NCAA will certainly affect leisure visitation as our destination serves as a popular location to watch and wager on the tournaments.”

Coronavirus fears started whittling the group last week, but Villano and a couple of other members of the group still planned to make the trip up until Wednesday afternoon, when ominous signs appeared.

“We had a contingency plan not to play table games that would minimize exposure,” Villano said Thursday. “I was completely devastated once I called and canceled the reservation at T-Bones (a restaurant at Red Rock), and canceled the cabana at the pool.”