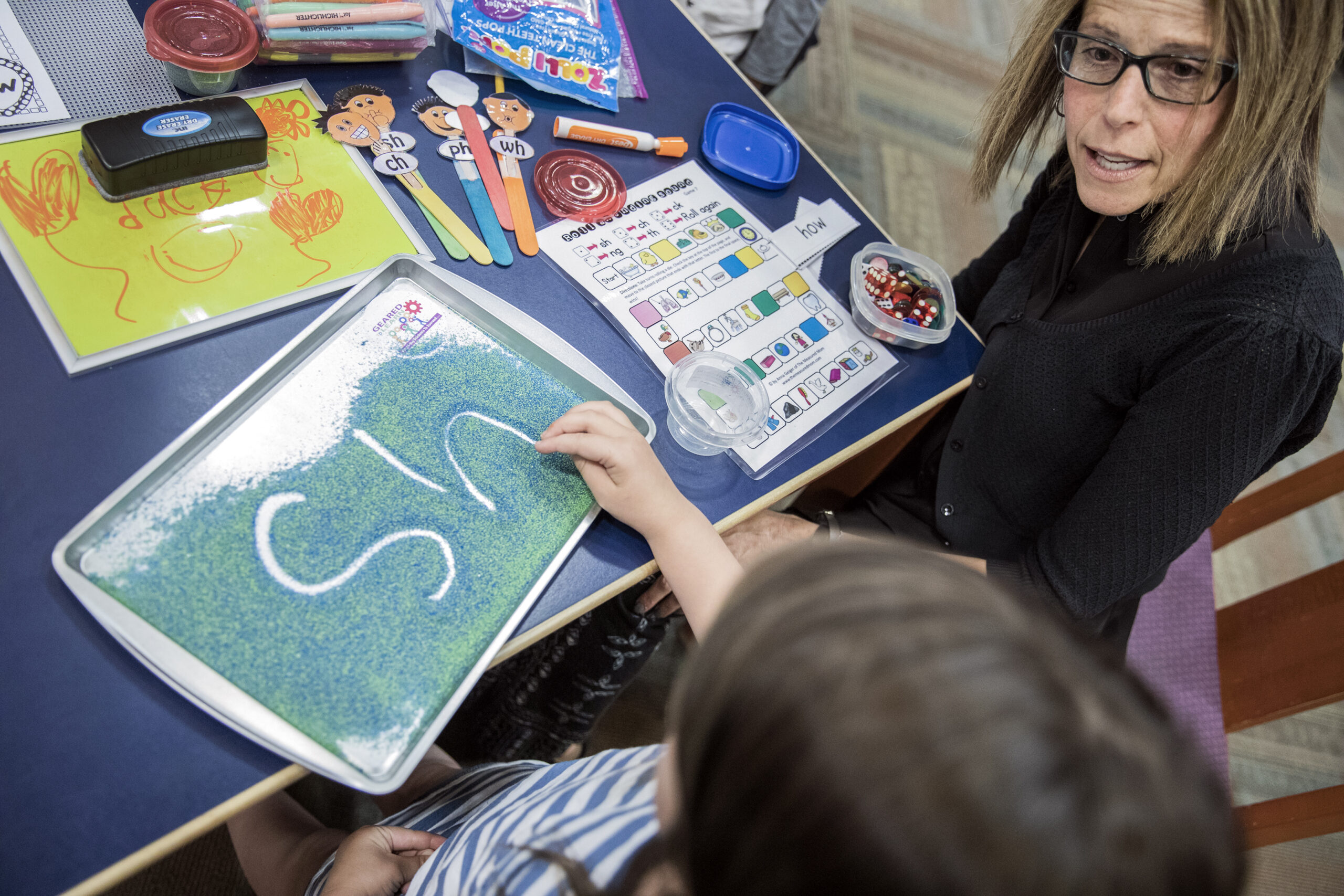 In a quiet environment filled with books, then-6-year-old Ellie Hayes recently dumped colored sand onto a cookie sheet and arched her hand.

It’s the type of scene that might make parents shudder, imagining a disaster waiting to happen. But not on this day. Ellie was simply following instructions from her reading tutor. Soon, her sand-covered cookie sheet had transformed into a writing canvass.

“W-I-L-L” Hayes said aloud as she traced letters into the sand.

The exercise continued inside the Summerlin Library. Shelley Kalb, a learning specialist, gave Ellie a word or consonant blend — such as “sp” and “st” — and the first-grader etched it in the sand. The activity was about more than just making learning fun. It was a multi-sensory approach to reading, combining touch, sight, hearing and movement. Kalb said it would ingrain new words in Ellie’s long-term memory.

Ellie’s father, Trevor Hayes, first realized something was amiss when his normally confident and talkative daughter didn’t want to go to school one day. She was afraid to read out loud in class.

“She’s the first one to raise her hand and sometimes doesn’t even wait to be called on,” said Hayes, a regent with the Nevada System of Higher Education. “She is a participator. To see her have that nervousness was something new.”

Conversations with her teacher at Our Lady of Las Vegas School led to a trip to Southern California, where a pediatric neuropsychologist diagnosed Ellie with dyslexia. The determination set Hayes on a journey trying to understand the learning disorder that makes reading and spelling difficult.

What he found: widespread misunderstandings about dyslexia and limited access to interventions that could help students like his daughter. Now, he’s on a mission to change that in Nevada.

There’s a common misconception about the language-based learning disability known as dyslexia. Experts say many people think dyslexia is a problem that involves reading letters or sentences backwards when, in fact, the disorder is much more nuanced.

The National Institute of Neurological Disorders and Stroke defines dyslexia as a brain-based impairment that often involves difficulty with phonemic awareness (the ability to identify and manipulate speech sounds that make up words), spelling and rapid visual-verbal responding. The severity of symptoms varies by person, and dyslexia is not an indication of intelligence.

By some estimates, as many as 1 in 5 people may have symptoms associated with dyslexia. But other researchers say the prevalence rate is probably between 5 percent and 10 percent of the population.

Still, do the math, and it’s likely that every classroom may have several students with varying levels of dyslexia.

“The biggest problem is that these students who are dyslexic are not identified early enough,” said Beth Moore, a fellow with the Academy of Orton-Gillingham Practitioners and Educators, which provides training on an instructional method to help students with dyslexia.

Nevada has made steps toward changing that. In 2015, lawmakers passed Assembly Bill 341, which requires early literacy screening for indicators of dyslexia, evidence-based interventions and professional development for teachers regarding the learning disorder.

Will Jensen, Nevada’s director of special education, said the state law has raised more awareness about dyslexia and the federal requirements surrounding it. The federal Individuals with Disabilities Education Act (IDEA) lists dyslexia as a specific learning disability.

“It was hit and miss,” Jensen said. “Some people had a real understanding of the IDEA and the instructional needs of persons with dyslexia. Some people simply did not. As a system, now a majority of people know and understand.”

The bill ran concurrently with legislation that implemented the Read by Grade 3 program, which sought to improve literacy among students in kindergarten through third grade. In those early grades, students are learning to read, but afterward, they’re reading to learn. The distinction illustrates how poor literacy skills can hamper student achievement.

Standardized tests results from the 2017-2018 school year show that less than half of third-graders — 46 percent — read proficiently in Nevada.

(The state does not track the number of students who have been diagnosed with dyslexia, as it’s a condition within the specific learning disability, or SLD, category.)

Even several years after the passage of the dyslexia and Read by Grade 3 bills, Jensen said the state has “a long way to go” in terms of boosting literacy. But he doesn’t think educators or parents should view dyslexia as a mysterious disorder. State education officials, he said, are working to sharpen educators’ reading instruction skills, including using evidence-based techniques to help students with dyslexia.

“If I had my way, it would be to let each teacher know that if they teach reading, they also know how to teach dyslexia and help bridge that gap for them,” he said.

Still, parents say unlocking services for children with dyslexia can be a time-consuming process despite the relatively new state law.

Allyson Juneau-Butler says it took 18 months of pushing before her son’s Henderson elementary school evaluated him for an Individualized Education Program (IEP) — an academic plan developed for students who qualify for special education services. By then, her son was halfway through first grade when he started receiving services for dyslexia.

Juneau-Butler had raised concerns with his teacher within the first month of kindergarten. She had noticed her son, whose name she doesn’t want included in the story, wasn’t picking up preschool academic content very easily. Thinking it might have to do with his late birthday, she delayed him starting kindergarten until age 6. Still, he struggled with letters and stumbled over spelling his name.

“He just didn’t seem to be grasping it like I had witnessed other children grasp it,” she said.

Her son’s kindergarten teacher and school administrators, however, initially resisted her requests to test him for dyslexia. Juneau-Butler kept pushing. About the same time she secured a private assessment for him, the school also agreed to do an evaluation. Both tests confirmed dyslexia, she said.

She attributes the struggle to educators’ inexperience versus any ill intent.

“Most of the reason it was difficult to advocate for him is because as much as they want to help all kids — and the staff at his school is wonderful — they just didn’t know what to look for,” Juneau-Butler said. “They weren’t trained or prepared. So they did not recognize that early intervention is extremely important for dyslexic children.”

School administrators purchased a curriculum based on the Orton-Gillingham method of teaching students with dyslexia, she said. Now, her son, who just finished second grade, no longer has daily homework-related meltdowns after school. He even enjoys reading signs and menus.

His literacy progress gives her chills.

“That makes my heart so happy as a parent,” she said.

The Orton-Gillingham approach is one of the more widely known methods of teaching students with dyslexia and is named after the neuropsychiatrist, Samuel Orton, and educator, Anna Gillingham, who researched and created it. Essentially, it’s a multi-sensory instruction method that’s personalized for each student and uses systematic phonics and applied linguistics.

It’s the method Kalb, the private learning specialist, uses with Hayes’ daughter, Ellie, when they meet twice a week for an hour. Hayes said Ellie’s Catholic school has formed a learning plan for her. He also applied for support through the Clark County School District’s Child Find Department, which identifies students not enrolled in public schools who are eligible for federally funded special education services.

Hoping to connect Ellie with services as soon as possible, though, Hayes began searching for private learning specialists. The pursuit proved difficult. He couldn’t find many people trained in the Orton-Gillingham approach in Nevada. Plus, the private services don’t come cheap: He pays $80 for every hour of tutoring Ellie receives.

Although it’s a financial burden his family can afford, Hayes said it would be too much for many others to bear. That’s why he has embarked on a quest to increase the number of trained educators and tutors. Hayes has spearheaded organizing a two-week Orton-Gillingham training course to be led by Moore, the academy fellow, this July in Las Vegas.

The 16 available spots have been filled, he said. Corporate and individual donors have pitched in money to defray the cost for participants.

“If I can get 16 more people trained, that’s a great start,” he said. “Hopefully, it goes so well we can do three times as many next summer.”

Hayes also flew to New Orleans earlier this spring and attended a Council of Parent Attorneys and Advocates conference. His experience navigating the complicated special education world for dyslexia services has inspired him to reactivate his law license and help other students who need an advocate.

“I now have a little bit of knowledge and a lot of passion,” he said.

One of the registrants is Karen Cavallaro, who knows all too well the demand for dyslexia services. She founded the Nevada chapter of Decoding Dyslexia, a parent-led organization bent on increasing awareness about the disorder and advocating for children.

Cavallaro’s twin son and daughter have dyslexia. Like other parents, she ran into roadblocks navigating the educational system for her son, whose dyslexia is more severe. The experience launched her into the advocacy and educational realms. Cavallaro took online courses on the Orton-Gillingham method and now tutors children in the Reno area, where she’s constantly turning away families seeking services.

“We’re failing a large percent of the population by not understanding how reading is even taught,” she said.

Cavallaro said she’s attending the Las Vegas training course because she wants certification from the Academy of Orton-Gillingham Practitioners and Educators.

Moore places some of the blame on higher-education institutions, which she said should spend more time preparing future educators for teaching reading. The Orton-Gillingham approach, she said, would benefit all students — not just those with dyslexia. The difference would be pacing.

“This class should be in undergraduate teacher education,” she said. “If students were going to teach elementary to middle school education, they should have this class and then it should be followed by a practicum, where they are observed teaching students. They should have that before they walk out the door.”

Dr. Laurie deBettencourt, a professor at Johns Hopkins University’s School of Education, agrees aspiring teachers need more exposure to evidence-based methods for reading instruction, but she cautioned against colleges relying too heavily on any particular approach or program. Her reasoning: School districts have great autonomy in choosing what reading curriculum and programs they use. Instead, she said education majors should be taught to use and look for evidence-based practices.

Still she would like to see all education students — whether they’re in the general or special-education tracks — take more than one course about phonemic awareness.

Roberta Kaufman, an associate professor in special education at Nevada State College, said higher-education institutions have faced external pressures regarding literacy instruction for at least 15 years. The college regularly reviews its curriculum and makes adjustments based on feedback and the changing needs of K-12 students.

It can be a balancing act, she said, reconciling everything the college would like to teach within the confines of the degree’s 120 credit hours.

“We would love to be able to do more,” Kaufman said.

Hayes hopes his fledgling effort to bring more Orton-Gillingham training to the state helps fill those gaps and sparks a larger conversation about dyslexia. After all, he has seen the effect a few months of tutoring has had on his daughter, who recently finished first grade and turned 7 years old Sunday.

“She’s doing a lot better,” he said. “She still thinks she can’t read, but then I saw her reading a book to her brother the other day.”