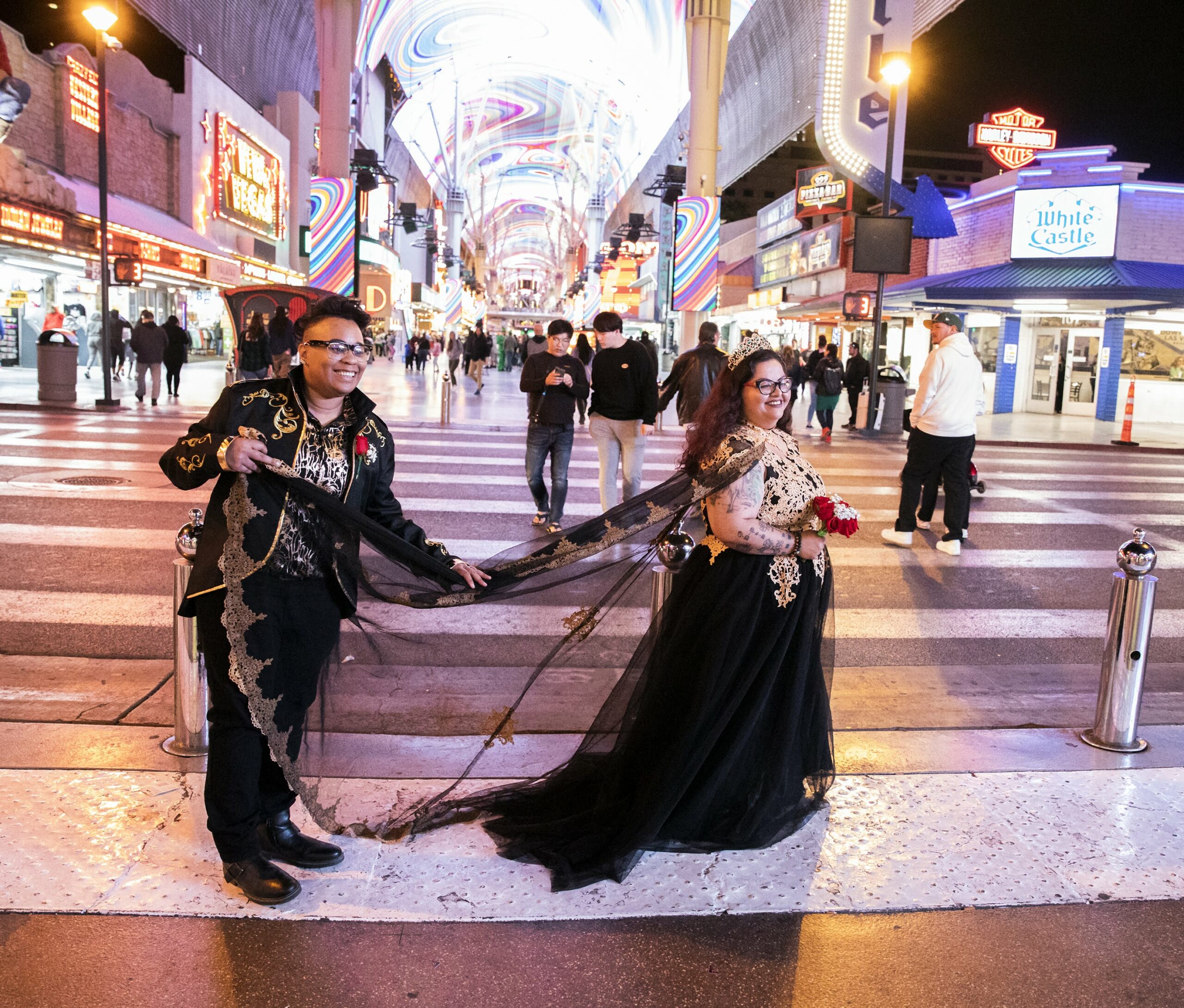 Once overflowing with wedding cliches and love-drunk newlyweds, Las Vegas and the rest of Nevada has had a near silence of wedding bells since the start of the COVID-19 pandemic.

Aside from the obvious effects of postponing the "happiest day" of people's lives, the decrease in marriages goes with an unexpected $2 million cost to domestic violence service providers across the state.

Since 1982, Nevada has dedicated a portion of marriage-related documents and services to funding domestic violence programs. The funds collected from fees of marriage licenses, commissions and certificates make up varying amounts of programs’ budgets: smaller, rural programs may have a bulk of their funding from the state while larger programs may rely on the funds to fill gaps from federal funding and match federal dollars when required for certain grants.

The state collects $5 from each marriage commission fee, $5 from each certified copy of marriage certificate or abstract fee and $25 from each fee for a marriage license, which costs between $60-$80 depending on the county. In Clark County, $3.75 of the $25 goes to funding sexual assault programs and $14 from the overall $77 fee goes to promoting wedding tourism.

But marriages have plummeted during the pandemic. Across the state, marriage licenses issued have fallen 87 percent, according to officials. Shutdown orders closed marriage offices and some still don't have a reopening date.

The drops in marriages directly translate into funding shortfalls.

Just in Clark County, home to the self-described wedding capital of the world, there was a 95 percent decrease in revenue for domestic violence programs from marriage licenses in April and a 69 percent drop in May compared to numbers from 2019.

Last year, domestic violence programs across the state received $3 million from marriage-related fees, the only state funding they receive. For the next fiscal year starting July 1, programs will receive an expected $1 million.

"That's a 66 percent decrease in funding that is basic to the work that we do," said Sue Meuschke, executive director of the Nevada Coalition to End Domestic and Sexual Violence that provides support and advocacy for programs on the ground. "We're only getting a third of what we had anticipated. It's cause for alarm."

With an indefinite end to the pandemic, it's uncertain when exactly weddings will return to typical levels in Nevada and funding for domestic violence programs will return to the $3.4 million amount that's held since fiscal year 2016.

Strains from budget cuts, coupled with increased need and decreased capacity for domestic violence service, haven't been felt yet but will be soon when programs receive their one-time award for the next year on July 1. In response to the $2 million shortfall, the state is partnering with the coalition for the first time to do a fundraiser later this month to try to soften the blow of budget cuts.

The lack of funding has become another factor in a sort of perfect storm domestic violence programs have been weathering since the start of the pandemic.

Nevada has historically had high levels of domestic violence, and programs were already experiencing a higher need than the previous year at the start of the pandemic. Shelters statewide provided 44 percent more beds from January to March of 2020 than in the same months last year.

But the coronavirus came with new challenges and worries for those working in domestic violence programs. Some programs experienced a decrease in calls once the shelter-in-place began, which Meuschke said was because some victims were unable to call while stuck at home with their abuser. Some didn't know programs were still open.

With the reopening of the state, calls have increased. Programs across the state reported up to a 65 percent increase in calls since restrictions have been eased.

This increased need is in the context of decreased capacity. Like many other organizations and companies, the programs had to secure large amounts of personal protective equipment and reduce capacity to follow social distancing guidelines. Programs also have had less volunteers, who help with critical functions such as working hotlines.

Service providers have made extra efforts to make communities aware they are open and following guidelines to keep victims safe "not only from the violence, but also from the virus," Meuschke said.

"So you had the reduction in regular capacity due to the need to prevent COVID from spreading, the decrease in marriage license funding, and then that, you know, the explosion in need," said Ross Armstrong, administrator of the Division of Child and Family Services. "So yeah, it was a perfect storm for the victim service providers for sure."

The overarching impacts of the coronavirus on almost every aspect of life means that domestic violence programs have seen an increase in the amount of services each person needs on top of the increase in people seeking services, Meuschke said. For example, victims may need help getting food or finding a job on top of help in staying safe.

"We know that across the board that making that decision to leave can be a lethal decision," Armstrong said. "So it's critical that we have these services there to help that victim navigate that moment and do it safely."

Stakeholders expected cuts in funding because of the pandemic but only learned the depth of cuts about a week ago, according to Meuschke, three weeks before they received their reduced award.

The state-collected funds are split amongst counties. Each county receives base funding and then additional funding based on population. Local service providers then apply for the funds of the county or counties they serve. Only Washoe and Clark County have more than one program providing services.

Clark County alone is expecting a take over half of the cut, experiencing a more than a $1.2 million loss when they receive their 2021 award of $628,900.

Funds started dropping in March following the beginning of the shutdown of the state. In March, the state received almost $189,000 in funding from marriage licenses, a $60,000 decrease from the $249,245 of March of 2020.

The drops aren't completely because couples decided to postpone their wedding day — office closures made getting the necessary documents difficult.

In Clark County, offices closed March 18. The county gave couples in need of marriages for emergency reasons, such as an expiration of a visa, rapid processing of a license at the office window during the shutdown. The Marriage License Bureau reopened April 27 for all couples and the commission office reopened May 20 with limited hours for ceremonies made by appointment only. Ceremonies are still performed at the office window and couples cannot bring any guests.

The Washoe County marriage commissioner's office has been closed since March and does not have a reopening date at this time, according to state officials.

But even before the coronavirus all but halted marriages in Nevada, there have been changes in wedding trends. This leaves marriage-related fees as a funding source in a "wait and see posture," Armstrong said.

Trying to fill the gap

Individual programs will have to decide what cuts to make from their own portion of the $2 million gap. They may choose to cut certain services, such as peer counseling or educational workshops, and/or adapt services, such as decreasing the number of hours hotlines are available, to keep afloat, Meuschke said.

"We have been in an overwhelming need, underwhelming resources for a long time," Meuschke said. "Even in the best of times, certainly we did not have enough resources to do everything we needed to do."

Meuschke said that trainings and some personnel, which accounts for the greatest amount in programs' costs, are probably on the top of the list of things to go. She said she expects programs will prioritize keeping their shelters open and hotlines running.

Federal funding may help fill in some holes. The state applies for federal grants, such as the one under the Victims of Crime Act (VOCA), and passes the money to programs. Normally, VOCA funds must be matched, which many programs used their funds from marriage-related fees to do, but the requirement has been waived because of the challenges of the pandemic.

Programs also may have money from their year-round fundraising efforts. Some have received PPP loans.

The state is also working with the coalition to have a fundraiser, the first time Meuschke has seen such a partnership in her 36 years working with domestic violence in Nevada.

"When the state offers to throw you a fundraiser, you know things are bad," Meuschke said. "We live in new days."

The "Say I Do" campaign asks communities to donate directly to local domestic service providers via the coalition's website on June 26 in light of the decrease in funding from marriage documents and services.

For people who can't donate money, Meuschke said that shelters need volunteers and will need donated items when it becomes safe to accept them again.

She said that she's seen many people get creative in how they use their skills to help during the pandemic, such as making homemade masks. She said she encourages community members to bring that same creativity to helping domestic violence service providers.

"I want to encourage the community to find out about their local program," she said. "We need everything."