Democrats take aim at Lombardo on election laws, school choice after State of the State 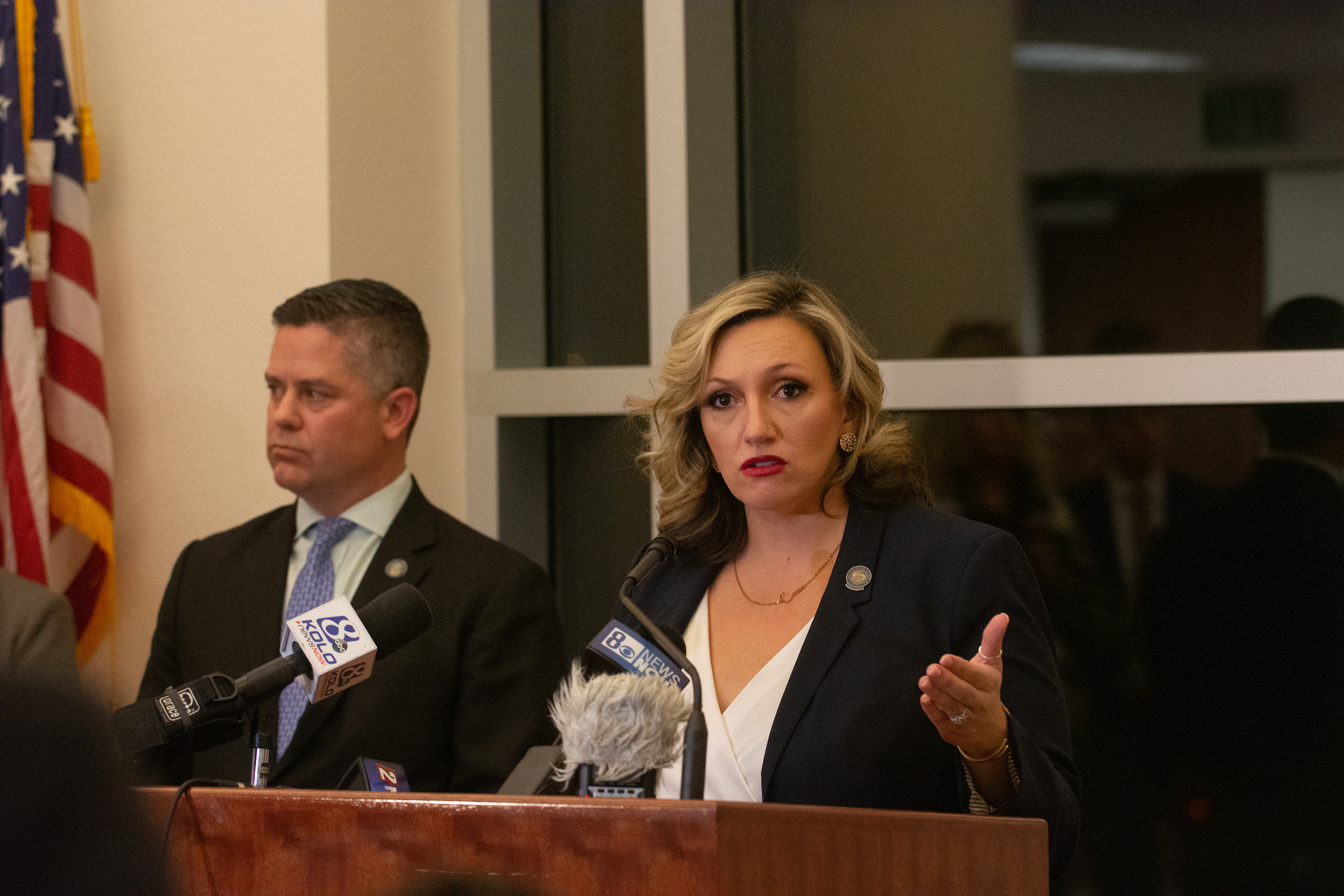 In the wake of Gov. Joe Lombardo’s State of the State speech, Democrats — who still control both legislative chambers — were quick to criticize the partisan elements of the address, even as they signaled they may support some funding priorities on bipartisan grounds.

Lombardo on Monday announced both substantial tax cuts and massive educational spending programs, competing philosophies fueled by a post-pandemic surplus in state coffers. But Democrats in the Assembly and state Senate noted what they called a lack of solutions proposed to address the affordable housing crisis, low teacher salaries and out-of-reach health care costs.

They also criticized the decision to place surplus dollars into the Rainy Day Fund when the funding could be used for needs such as additional rental relief aid.

Reaction from top Democrats, as well as from several key outside advocacy groups, is collected below.

For a full account of Lombardo’s speech, you can read more here. For a deep dive into the specifics of the governor’s proposed budget, go here.

He signaled that legislative Democrats may compromise with Lombardo on some crossover issues, including increasing pay for state workers and increased education funding, and touted Democratic involvement in the creation of the Pupil-Centered Funding Formula now being expanded by Lombardo under the recommended budget.

He also said that Democrats agree jail should be a last resort for acts related to mental health issues.

His Senate counterpart, Majority Leader Nicole Cannizzaro (D-Las Vegas), also criticized the partisan tack of a “few things” in Lombardo’s plans, though she expressed optimism about his intent to “work together” with lawmakers.

However, Cannizzaro, who spearheaded the public health insurance option during the 2021 legislative session, slammed Lombardo’s characterization of that measure as both rushed and “political theater,” saying “both those things cannot be true.”

“There is no proposal that we heard tonight from the governor to reduce costs for Nevada families,” she said. “For health care, there is no plan [from Lombardo] to figure out how to insure the static number of Nevadans that remain uninsured, despite expansion of Medicaid and despite investments in other health care pieces, which is exactly the reason why we passed the public option.”

She also pushed back against the funding of Opportunity Scholarships, which support private school tuition, noting that for many Nevadans the only opportunity to receive an education is the public school system.

“We have in Nevada, an issue in our public school systems. We don’t have a qualified teacher in every classroom … We are not investing in them enough,” she said. “And frankly, speaking to things we didn't hear that speech tonight, I didn't hear anything about teacher pay. And we know that that's a critical issue.”

While Lombardo announced plans to put an unprecedented amount of money into state savings accounts — including a proposal to send an additional $626 million to the Rainy Day Fund, an account used to fund state government during emergencies — Yeager raised questions about whether those dollars could be used for more pressing needs.

“At some point, how much is enough?” Yeager asked. “As our former colleague Maggie Carlton used to say, ‘It's great to be able to save money, but you can't put money in a savings account when you can't feed your family, and you don't have a roof over your house.’”

Both Cannizzaro and Yeager said they would not consider any changes to existing election policies. Lombardo proposed repealing universal mail-in voting.

“Scaling back on the way that we vote — it’s a non-starter,” Yeager said.

Democratic Secretary of State Cisco Aguilar, in a separate statement, pushed back against Lombardo’s election policies more obliquely, touting the state’s mail-in elections as “some of the most secure and accessible elections in the country.”

“The 2022 election proved that universal mail ballots work for Nevadans across party and partisan lines, which is a testament to the foresight of our legislature,” Aguilar said. “Last November proved that Nevada voters have faith in our elections, and my office is working hard to keep that faith.”

“We didn't hear about health care, and what the governor's plan is to address insurance premiums and prescription drugs,” said Assemblywoman Selena Torres (D-Las Vegas). “Did you hear about a plan for health care providers for state? Quite honestly, the day after the 50th anniversary of Roe vs. Wade, we had no conversation regarding reproductive rights or women's health care.”

A tale of two teachers unions

In the wake of a heavy dose of education-centered policy goals — from a massive funding increase to a proposed repeal of key portions of a restorative justice bill to a push to expand school choice through Opportunity Scholarships — the state’s two largest teachers unions took two different paths.

In a tweet sent during the speech, the Nevada State Education Association, the statewide union, said “we heard no bold proposals to fix the ongoing crisis in our schools.”

“Instead, [Lombardo] dusted off a failed voucher scheme that does nothing to improve the quality of education in Nevada,” the group tweeted. “Transferring public tax dollars to private schools is the wrong answer.”

The Clark County Education Association — the state’s largest teachers union centered in Las Vegas — did not make mention of the school choice announcements, instead lauding the governor for putting more money into the new “weighted” school funding formula, school safety and teacher retention and recruitment.

“This kind of investment is unprecedented and has been a long time coming,” the statement said.

Several outside groups that also traditionally back Democrats took aim at policy specifics within Lombardo’s State of the State.

That includes a spokesperson for the Culinary Workers Union, Bethany Khan, who criticized Lombardo’s push to repeal SB4, a 2020 measure enacted during a special session with certain health and safety requirements for hotels and casinos.

“Culinary Union’s SB4 has saved countless lives,” Khan wrote in a tweet. “It already has a built-in sunset when COVID rates go down. If Lombardo wants to do something, he can encourage gaming companies to give workers a raise and decrease their workloads.”

Athar Haseebullah, executive director of the American Civil Liberties Union (ACLU) of Nevada, praised Lombardo for promising increases to state funding for education, state workers and mental health — but also took aim at Lombardo for his proposals on criminal justice.

“Regressive measures within our already absurd and outdated criminal legal system aren't likely to make people more safe,” Haseebullah tweeted. “They drive up costs for taxpayers you pay for, create little long term public safety benefit, and have been a historical failure.”

On the potential issue of public employee wages — which Lombardo proposed raising by 8 percent in 2024 and 4 percent in 2025 — at least one major union signaled that more negotiations are still on the horizon.

Harry Schiffman — head of the American Federation of State, County, and Municipal Employees (AFSCME) Local 4041, which represents many public employees in Nevada — said in a statement that Lombardo’s promises on state worker pay were encouraging, but “do not go far enough to support retention and recruitment needed to address the chronic understaffing across all state agencies.”