Despite casinos reopening and tourism activity resuming, many workers remain left behind 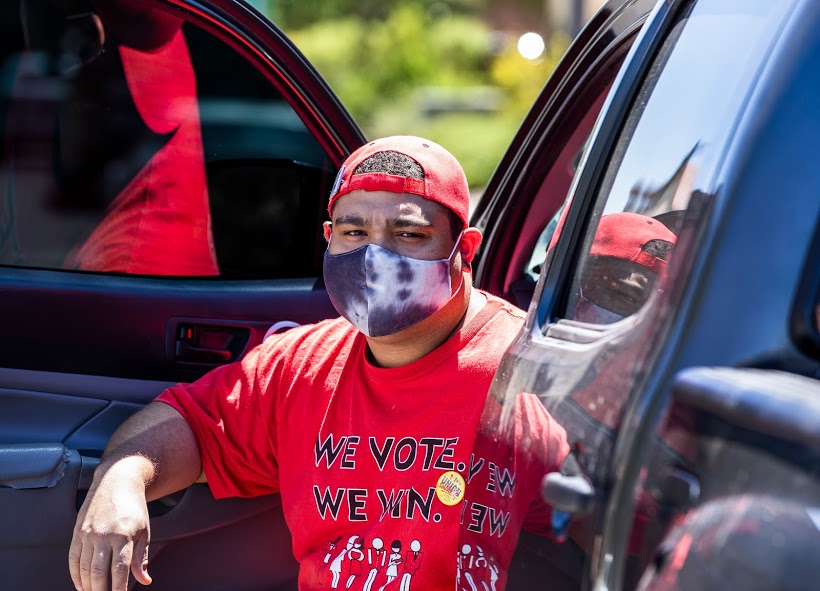 A television ad beckoning tourists to Las Vegas debuted last week, showing the casino-dotted boulevard lighting up with the flick of a giant switch.

The 30-second commercial ends with a simple message: “NOW OPEN.”

The reality is more complicated for the state’s gaming- and tourism-dependent workforce. While the lights may be on, not everyone is back home. The coronavirus-triggered shutdown sidelined gaming, hospitality and entertainment workers across the state — thousands of whom have not returned.

Donna Kelly-Yu is one of those workers in limbo. A dispatch butler at Caesars Palace, she prided herself on making sure guests received what they ordered, whether it be a late-night snack, gluten-free meal or bite-size meat for the dog who accompanied them to Las Vegas. Now, she’s deferring mortgage and car payments while waiting to receive a call back to work. A snafu caused by vacation pay, Kelly-Yu said, has delayed her approval for unemployment assistance from the state.

“I know they’re working on it,” she said. “I have faith in the governor. I know that he is doing his best and I’m not the only one this is happening to, but it’s very challenging.”

Kelly-Yu and her husband have been living off his Social Security benefits and retirement pay as well as some money socked away in a savings account. They’re also babysitting their grandchildren three days a week and receiving financial assistance from their daughter.

The 57-year-old is like many of her fellow Culinary Workers Union Local 226 members who don’t know when they can resume their jobs. (As of Friday, the Culinary Union could not say how many of its members had been recalled to work, which is based on house seniority.)

And they’re not the only ones. With nightclubs, concerts and shows still dark, most of those workers aren’t returning to their jobs in or around casinos either. R.J. Owens — better known as “Bebe Francois” in the Cirque du Soleil show “Mystere” — has traded his on-stage act for a myriad of household projects while laid off. He has made Roman shades, cleaned his office and garage, built furniture, cured meats and done some leatherwork to stave off the loss of what he calls “the best job in the world.”

“I’m a 50-year-old man who gets to wear a diaper to work and not because I have to,” he said. “I get to do something different every single show. I feed off the audience.”

It’s unclear how long their wait will be. Casinos gradually have been reopening at reduced capacity to comply with new health and safety policies. Plus, the prohibition on gatherings of more than 50 people has put some of the city’s hallmark entertainment options off limits.

The ripple effect can be found in company layoff notices. Drai’s, a nightclub at The Cromwell, gave notice to county and state officials in a letter dated May 27 that it was furloughing or laying off 526 employees. The notice, required by a federal law known as the WARN Act, says the company hopes to rehire employees during a “phased resumption of operations.”

“These sudden and unexpected circumstances and the dramatic economic downturn suffered by Las Vegas and our industry are conditions outside of our control,” the letter states. “The COVID-19 pandemic is an unprecedented natural disaster, the full effects of which remain to be determined.”

About 38 percent of the state’s unemployment insurance claims have come from the “accommodations and food services” industry, while another 3 percent stem from “arts, entertainment and recreation,” according to a DETR (Department of Employment, Training and Rehabilitation) report for the week ending May 30.

Jeremy Aguero, principal analyst with Las Vegas-based Applied Analysis, said gaming and tourism-related jobs are expected to return in thirds. The first round of employees, he said, were rehired to staff the casinos that reopened June 4 when the 78-day shutdown lifted. Aguero said the second wave could be rehired by the middle or end of summer as activity ramps up, but the third group may face a prolonged stretch of unemployment given structural industry changes caused by the pandemic.

There are some promising early signs, though. Apparent pent-up customer demand has increased hotel bookings enough that major gaming companies have moved up opening dates for some of their casino-resort properties.

“We should not misinterpret positive signs as the fact that our economy has recovered,” he said. “That is going to be measured in a lot longer than a couple of months.”

Even if visitor volume steadily increases, the likelihood of all jobs returning is nil, said Barry Jonas, a senior gaming analyst with SunTrust Robinson Humphrey. The closure accelerated the industry’s search for efficiencies that could boost the bottom line, he said. Automation or so-called touchless technology — a selling point in the age of coronavirus — will render some jobs obsolete.

“A lot of these initiatives are not just about the COVID prevention,” he said. “They’re about profitability.”

Geoconda Argüello-Kline, the Culinary Union’s secretary-treasurer, said the organization never expected jobs to bounce back overnight. The union knew it would be a “slow process,” she said, and has prioritized workers’ health and safety over anything else.

Even so, the Culinary Union, which represents roughly 60,000 workers, has been negotiating with casino and resort companies to secure two-year recall rights for its members. That would mean workers could be recalled to a full-time position in their job classification and at the same level of pay for up to two years after the layoff.

So far, the union has reached that agreement with the Cosmopolitan, Wynn, Encore and Hilton Grand Vacation properties. Other logistics, such as if and for how long unemployment assistance would be extended, have yet to be worked out with the state.

“If you’re going through this pandemic crisis and you have this economic situation, your job is on the line waiting for you when the business is better. That’s one thing,” Argüello-Kline said, explaining how the union is balancing the health and economic interests of its members. “But the most important part is how they are going to protect their life and their families.”

The union is maintaining health coverage for its laid-off members and has set up a food assistance program. Since March, about 34,000 baskets of food have been given to union workers and their families.

Mariza Rocha, a utility porter who was laid off from the Stratosphere, said her family would be struggling if it weren’t for the $600-a-week federal unemployment assistance she receives on top of the state aid. But the federal benefits are set to expire at the end of July.

As a utility porter, Rocha spends her work days completing building upkeep tasks such as shampooing carpet or cleaning walls. The 39-year-old said it can be tough but satisfying work. She’s clinging to hope that her job will be recalled by the time all casinos reopen. If not, Rocha said she would consider looking for work elsewhere.

“I like (it) better to work than to be on unemployment,” she said.

Owens, the Cirque du Soleil performer, said he’s “woefully concerned” about his job. Two-thirds of his performance involved audience participation, a less-than-ideal scenario amid a pandemic that has made social distancing a key tool in the battle against the virus.

The trained magician and actor who has bachelor’s and master’s degrees in theater arts has applied for an assortment of other jobs, including Amazon delivery driver, while he waits it out. But he has already received two rejections from companies that told him he was overqualified.

Owens has another trick up his sleeve — moving to Los Angeles to pursue acting roles — but he’s not quite ready to take that plunge.

“There’s a part of my heart that knows Las Vegas is about entertainment, and Cirque du Soleil is as much the entertainment juggernaut in Las Vegas and the thing that people want to see,” he said.

The job uncertainty stretches far beyond the “Welcome to Fabulous Las Vegas” sign, though. Consider the small city of West Wendover, which sits near the Utah border in Northern Nevada. Casinos employ about two-thirds of the city’s workforce, so when the coronavirus shut down nonessential businesses statewide, roughly 2,000 residents — including Mayor Daniel Corona — found themselves out of jobs.

The local food bank, he said, went from serving about 50 families a day to more than 300. Corona, who lost his health insurance and burned through $3,000 in savings, eventually sought the food bank’s assistance, too. He even wrote an essay about the decision, hoping it would encourage others to not feel any shame about food insecurity.

Since then, four of West Wendover’s five casinos have reopened, meaning not all of its laid-off residents have gone back to work. Corona, a poker dealer, said he “got really lucky” because he temporarily was moved into a bartender role until the poker room reopens.

The notion that economic hardship is suddenly over now that casinos can operate irritates the 28-year-old mayor.

“It’s not like switching on a light switch where we reopen the casinos and everything is back to normal,” he said. “Obviously, there has to be a transition phase.”

On Thursday, exactly one week after casinos could reopen, Rocha, the porter, received a call from her employer asking her to take a COVID-19 test. It’s a clue she may be back at work soon, though her start date is unclear. For many other workers tied to tourism, the waiting game continues. But that doesn’t bother Juston Larsen, a Culinary member who works as a Starbucks barista inside McCarran International Airport. As someone with asthma who carries an inhaler, he knows his health condition elevates his risk for the virus.

“I know it’s going to take some time,” he said of being called back to work. “And that’s totally okay.”