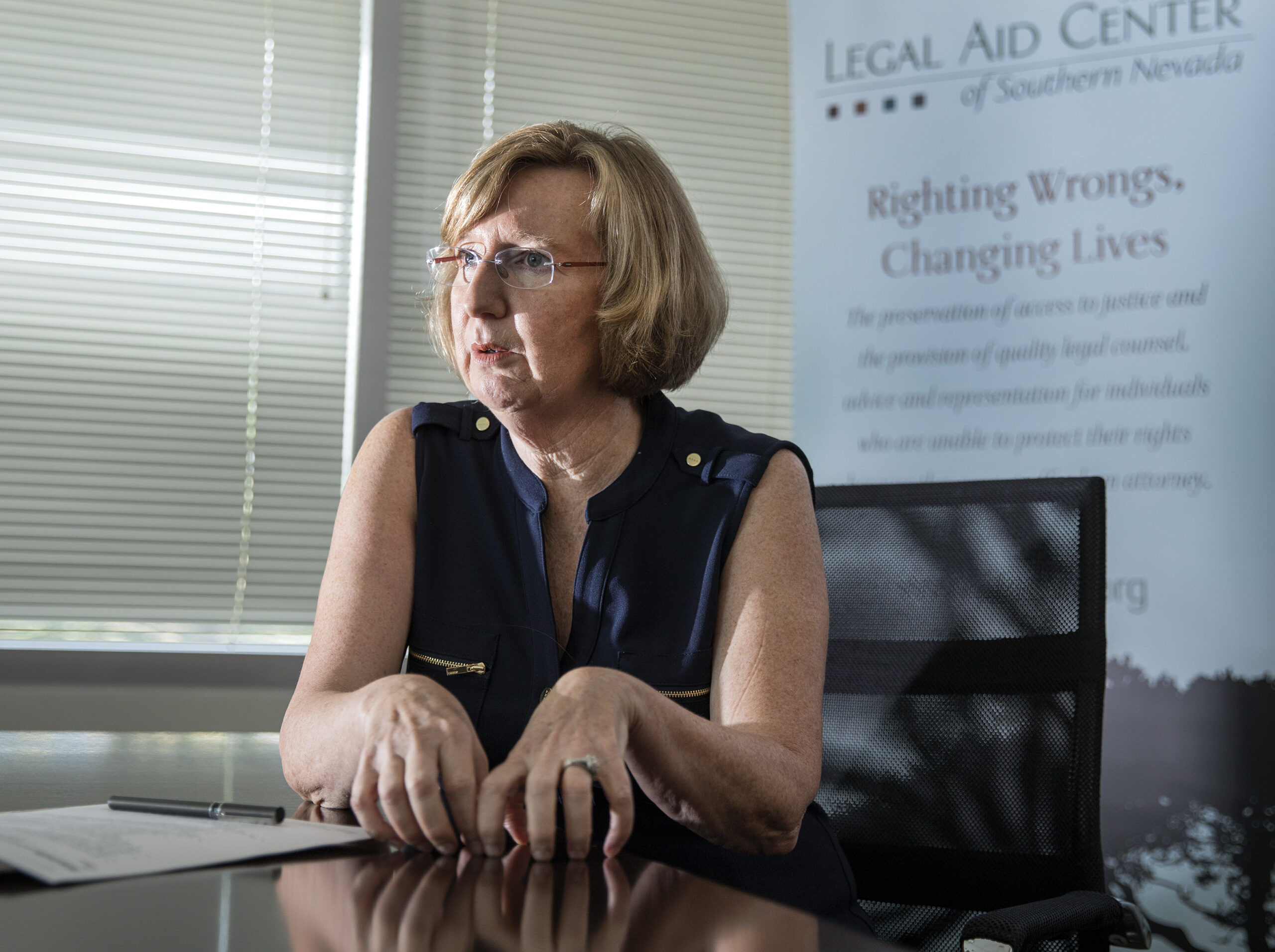 Although the federal government is poised to extend unemployment programs that are supporting hundreds of thousands of Nevadans but were set to expire in four days, state officials expect there will be a gap in benefits as computer systems adjust to the changes.

Barbara Buckley, head of a strike force that is assisting the Nevada Department of Employment Training and Rehabilitation (DETR) work through the deluge of claims it has received during the pandemic, said she’s pleased that people depending on programs such as Pandemic Unemployment Assistance (PUA) will have the prospect of benefits in the new year.

But she said Congress’ procrastination has not allowed enough time for state officials all across the country to understand the bill, reprogram computer systems and continue payments uninterrupted. That could have “really, really devastating” effects for claimants who have already burned through their savings and may go without income for several weeks while the system catches up with the law and can dole out back payments.

“Waiting to the last minute is really horrible,” Buckley said in an interview with The Nevada Independent on Monday. “It's a horrible way to govern, and to ensure that there's no gaps for people who desperately need the money.”

A 5,593-page bill in Congress, introduced on Monday, will add 11 weeks of eligibility to the PUA program that is set to expire after this week and is serving about 80,000 Nevada claimants. With Nevada participants already eligible for up to 46 weeks, the extension could allow them to claim up to 55 weeks.

It will also add 11 weeks to the Pandemic Emergency Unemployment Compensation (PEUC) program, which is serving nearly 100,000 Nevadans who have exhausted their regular state unemployment benefits. Claimants can make an initial application to PUA or PEUC for any weeks ending up to March 14, and if they have not exhausted their entitlement of PUA or PEUC, can continue making weekly claims up to April 5.

The bill also restores Federal Pandemic Unemployment Compensation payments that are added on to base benefits, although they will be $300 a week rather than the $600 a week provided earlier this year. Nevada PUA claimants, who can draw up to $469 a week in benefits, would receive up to $769 a week with the add-on.

Another provision that may relieve stress for Nevada claimants is that it allows states to waive the obligation that PUA claimants reimburse the government if they are overpaid, if it was not the claimant’s fault and if forcing them to repay would go against “equity and good conscience.” Buckley and DETR Administrator Elisa Cafferata said that errors are common in applications and can generate a request to already-destitute claimants that they pay back sometimes tens of thousands of dollars.

But Buckley said that the bill still falls short of Nevada’s needs and “is a little disappointing” because it extends programs for 11 weeks rather than the 16 originally discussed in Congress. Some 280,000 people filed a weekly claim for benefits in the most recent week on record — a number that is up from the week earlier in a sign that the state’s tourism-fueled economy is stagnant.

“Nevada is not going to turn around overnight,” Buckley said. “Perhaps they'll extend it. But again, certainty and only having to do the programming once would have been great, and then it doesn't create more backlogs.”

DETR said that because of computer setbacks, it is still in the process of paying out the fifth week of Lost Wages Assistance — a program that pays out $300 bonuses to certain claimants who were unemployed for weeks starting in August and are receiving at least $100 a week in base benefits.

The process was supposed to take about five to 10 days, but is now still going about a month after beginning. The delay is even standing in the way of the Federal Emergency Management Agency (FEMA) making a decision on whether it will give Nevada more money to pay a sixth week of Lost Wages.

Cafferata said the system was quickly able to pay out PUA claimants, whose minimum benefit is $181 a week. But the process has taken much longer for the pool of claimants in the regular, state-paid unemployment program, where claimants can receive amounts below the $100 threshold, requiring DETR verify who is and isn’t eligible for the benefit.

“Up until week five, it was taking about five to 10 days to get through all the batches in UI. And then we had to do a computer programming fix that was totally unrelated to Lost Wages, but was impacting those runs,” Cafferata said. “So we had to stop doing week five, run the computer programming fix, and then restart week five ... So it just is much slower than we would like.”

She said the system is also buckling under a workload that is about 10 times more than it was designed to handle. This weekend, the state processed about 50,000 Lost Wages payments, and is hoping to wrap up this week.

“This is really a very constrained computer program that can only make one change at a time,” she said. “And the team is doing a phenomenal job with a system that is operating far beyond its capacity that it was built for.”

While DETR has requested more money so it can pay eligible claimants a sixth installment of the benefit, FEMA has not committed to doing so.

“They just will not commit to making the adjustment until we finished paying our week five,” she said. “I would say don't count on week six … The grant is not large enough to cover it.”

After a judge found DETR to be in contempt of a court order issued this summer to restore the flow of benefits for people who had seen payments stop, DETR has pivoted to ensuring they are in compliance by a Dec. 24 deadline.

Washoe County Judge Barry Breslow fined the state $1,000 and ordered immediate action on about 9,000 claims for which payments were stopped.

“The priority up until and through this week will be making sure we come into compliance with a court order,” Cafferata said. “We still have one small group of claimants to review and make sure we're in compliance.”

DETR must restart payments that had stopped unless claimants have not filed weekly claims for benefits, are making earnings in excess of the allowable limits, or if there is clear and convincing evidence of fraud. A status check in the case is set for Dec. 31.

Resuming the payments should help address many of the cases stuck in the backlog of appeals, Cafferata said.

Cafferata also said there are about 400 or 500 cases that have been scheduled for an appeal or are awaiting scheduling. Beyond that, there are additional cases that are thought to need review from staff but that could be settled outside of an appeals hearing setting.

The same group of staff that is trying to ensure DETR pays out people under the court order is the group that will then work on addressing claims that need a non-hearing solution.

“Once we are able to put five or 10 more people on that, we should be able to get through them very quickly,” Cafferata said.

Hearings are quasi-judicial proceedings that are supposed to be independent of the day-to-day operations and staffing of DETR, to make the process fair. While appeals in the regular unemployment program involve hearing from the claimant and their employer — often on questions of whether the person was laid off or quit — the PUA program for the self employed is more centered on whether the person qualifies under the existing parameters of the program.

“A lot of it is this question of is your unemployment COVID related?” Cafferata said. “And it seems like it should be very clear, and it's not.”

To work through the appeals backlog, DETR has reached out to the Public Utilities Commission and UNLV’s Boyd School of Law to try enlisting more people with expertise in applying the law and federal guidance to the facts of a claimant’s case.

“There's definitely a willingness to help us out, which is great, we appreciate that,” Cafferata said.

DETR officials say that a force of 200 welfare workers who are working overtime for DETR to address pending claims have been able to work through 5,000 to 6,000 cases a week that have yet to be approved or denied.

Nevada recently depleted its unemployment trust fund and is now borrowing money from the federal government to keep regular, state-funded benefits rolling out for claimants.

Under normal circumstances, employers whose laid off employees tap into unemployment are docked and must pay a higher tax rate into the trust fund based on the usage rate, called the “experience rating.”

But a bill passed by the Legislature in a special session over the summer holds businesses harmless for relying on the fund, and the rate of the overall employer tax rate will remain the same in 2021 as it has been in 2020, pending approval of regulations by the Legislative Commission later this month.

“It really wasn't anyone's fault that this economic crisis hit,” said Cafferata. “There won't be an immediate change for businesses, which is good news for them, because they're all struggling. And so it's important to sort of keep things stable for them.”

DETR has also taken action to ease the burden on nonprofits and government employers, called “reimbursable employers,” who are on the hook to pay the full cost of benefits paid out to their former employees if they are laid off. That’s different than the standard arrangement where employers pay a low tax rate in an insurance-style arrangement that has the state covering the majority of benefits in the event of a layoff.

“They've seen much higher bills than they normally would, because of the unemployment rates and also the fraudulent claims,” Cafferata said. “So we are forgiving 50 people of those charges, just because again, it was no fault of their own.”

Buckley said she is preparing a report on the strike force’s activities and plans to step back from the volunteer role she has held since August when that is complete. One of the recommendations that will be included: investing in the computer infrastructure needed so the system can better handle large volumes of claims.

“We can't be tied to a system that can't serve the people,” she said.

She said she’ll also be looking to see what Congress might be doing beyond the proposed extensions to carry Nevada to recovery.

“So we got a little Band-Aid. But in the end, there are a large number of people who were laid off in March who still don't have a realistic chance of being called back,” she said. “So I think we gratefully accept … these extra weeks that we're receiving, but it is not a bridge to the other side yet. It's a couple large boulders in the creek. It's not a bridge.”