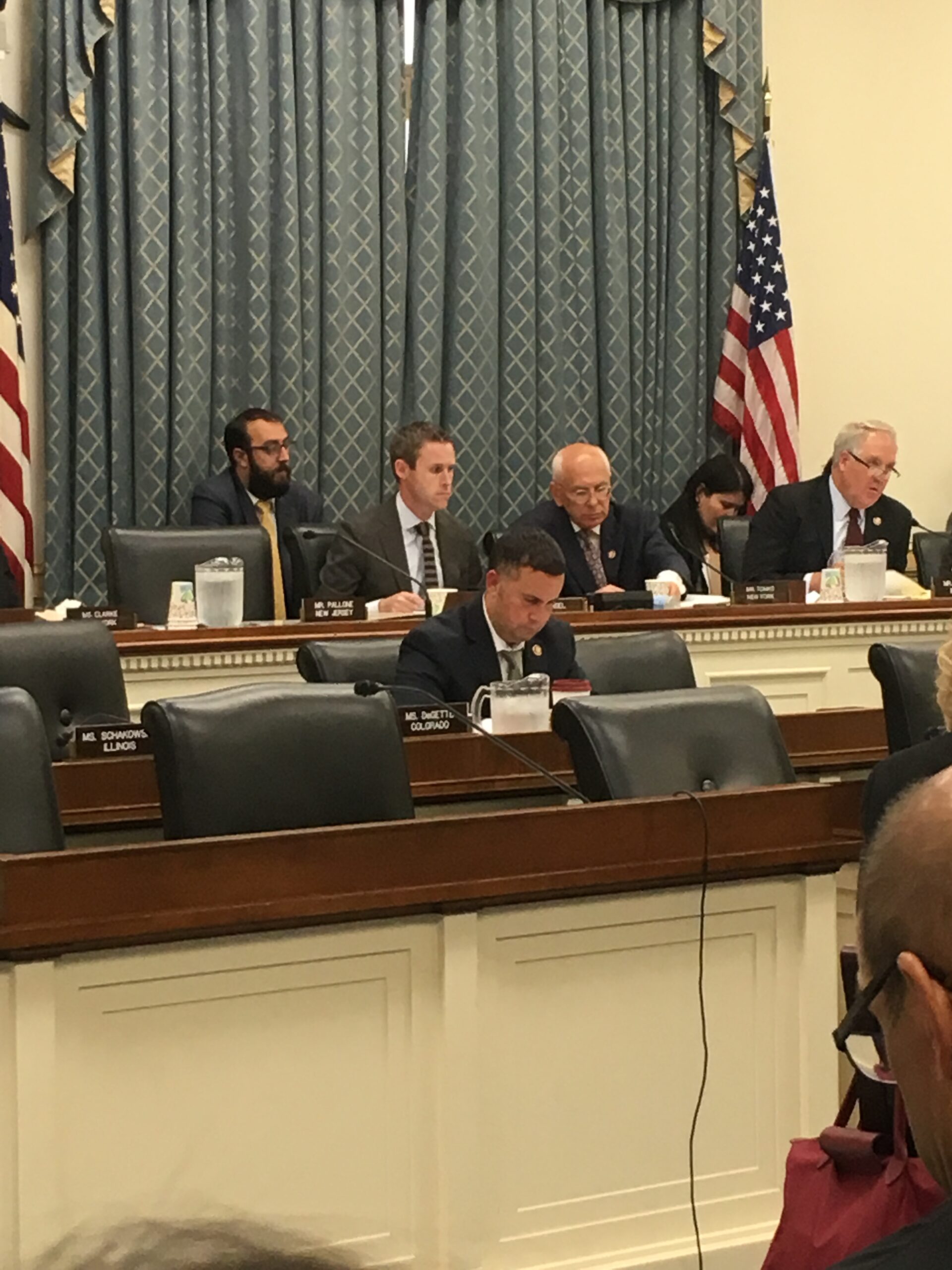 The stalemate over building a national nuclear waste repository in Nevada could possibly be overcome if the Department of Energy was no longer the lead federal agency on the project, experts and members of Congress suggested at a House nuclear waste hearing.

“It seems there has been a huge gap between the Department of Energy and the state of Nevada and that they are operating using two different sets of facts and don’t trust each other, which is leading to cause further delays,” said Missouri Republican Rep. Billy Long.

Long, a member of the Energy and Commerce Committee’s Environment and Climate Change Subcommittee, which convened the hearing Thursday, asked former DOE nuclear waste official Lake Barrett if the DOE should be replaced by another agency.

“I think it would better if it was another federal agency or some other federal organization,” Barrett said. “I think there’s an awful lot of old baggage with the Department of Energy and we could have a better engagement with a different type of organization."

The DOE did not immediately respond to a request for comment on the idea — or on why no DOE official was on the witness panel.

A Senate bill introduced in April by Alaska Republican Sen. Lisa Murkowski would establish an independent agency to manage the country’s nuclear waste program in place of the DOE.

Although Robert Halstead, executive director of the Nevada Agency for Nuclear Projects, agreed that DOE had not been a productive partner, he said that irrespective of what agency sits across from the negotiating table, the state would need to have veto authority over the project like that given in the Nuclear Waste Informed Consent Act. Introduced by Democrats in Nevada’s congressional delegation, the bill would require state and local consent to advance the project.

“If [Congress is] willing to adopt the Nuclear Waste Informed Consent Act, or its equivalent with different language, then that would open the door to have a discussion with Nevada,” Halstead said after the hearing.

South Carolina Republican Rep. Jeff Duncan also indicated frustration with the DOE — and not just over the repository at Yucca Mountain, but also with the 2014 decision to scrap a plant in South Carolina to repurpose plutonium into nuclear fuel.

“I say that no one wants to trust the federal government with regard to doing what they say they're going to do,” Duncan said.

The mothballing of the plant in South Carolina forced the DOE to find a new place to store the plutonium, some of which was shipped to Nevada for storage at the Nevada National Security Site. That development was just the latest event in the agency’s long history with the state.

Nevada, which contends the DOE secretly shipped the plutonium despite negotiations to prevent the shipment, is suing the agency in an attempt to prevent future shipments. Preliminary arguments are scheduled for August 8 as part of Nevada’s appeal of a judge’s decision to deny its initial effort to block future shipments. The DOE contends that state officials were aware of the agency’s plans

“I think you heard it and seen it in the state comments, they are very frustrated with DOE on the defense plutonium,” Barrett said after the hearing. “It has nothing to do with this [Yucca] issue, but nonetheless there’s bad feelings, ‘that you didn’t tell me, you should have told me’ or whatever and I think that is clouding getting in the way of progress.”

After the hearing, Robert Halstead, executive director of the Nevada Agency for Nuclear Projects, who testified on behalf of the state, called the DOEs absence from the hearing “strange,” adding that he did not believe the agency had endorsed any of the bills the subcommittee discussed.

Those bills include a measure to restart the licensing Nuclear Regulatory Commission process for building a national repository at Yucca Mountain.

During the hearing, Halstead reiterated the state’s opposition to the bill, stating that the site is not geologically sound, and would require man-made barriers to prevent contamination of an aquifer from which water is drawn for a variety of purposes including drinking water, agriculture, food processing and Native American religious ceremonies.

“Yucca Mountain contradicts the foundational principle of geologic disposal that the site itself—its geology and hydrology, not engineered barriers designed by humans—must prevent the radioactive contamination of groundwater in the accessible environment for tens of thousands to a million years,” Halstead said.

Supporters of the bill argued that Congress should move forward given that a law passed in 1987 deemed Yucca Mountain as the site for a national repository and that electricity users paid fees established by the law for the project’s construction.

“What do we say to ratepayers if we just walk away from the Yucca Mountain licensing review and allow unadjudicated contentions to stand by default?” Illinois Republican Rep. John Shimkus asked the panel.

“It’s embarrassing,” he said of the situation, which has seen the fund for the project balloon to more than $40 billion since it was established. (DOE stopped collecting the fee in 2013 given the stalemate over the project.)

Shimkus is a champion of building the site at Yucca, and a bill he authored last year passed the House with overwhelming support. With Democrats taking the majority in the midterm elections, the lead sponsor of the bill is now California Democrat Jerry McNerney.

But the future of the bill is uncertain at best with the Democratic members of the Nevada delegation setting up hurdles where possible.

Rep. Dina Titus’ office predicted the bill would not advance to the House floor. Titus is close with Speaker Pelosi, who has historically opposed Yucca.

“Representative McNerney’s irresponsible bill is a weak attempt to force nuclear waste down Nevada’s throat,” Titus said in a statement provided from her office. “We have already beaten back stronger threats, and I’m confident that this reckless legislation will not see the light of day. I’m grateful that the committee invited Bob Halstead from Governor [Steve] Sisolak’s office to testify because he is an expert who understands that pro-Yucca politicians do not have science on their side.”

Rep. Steven Horsford, whose district includes Yucca Mountain and who has also been active in beating back the efforts to jumpstart the project, submitted testimony to the committee for the record in which he made the case against the project.

Halstead did recommend that Congress move forward with establishing a temporary storage program in order to consolidate the 121 sites in 39 states around the country where waste is currently kept. Democratic Rep. Frank Pallone of New Jersey, who is chairman of the full Energy and Commerce Committee, also indicated support for interim storage.

But concerns were raised that without progress on a permanent repository, like that proposed at Yucca, temporary storage could become permanent by default. One of the bills the panel discussed was a proposal to authorize DOE to start an interim storage program with priority given to decommissioned nuclear power plants.

“If you don't have the long-term repository, when you sign up for the interim repository, you might feel like you're signing up for the long term repository,” said Maria Korsnick, president of the Nuclear Energy Institute. “And so it really negates the idea of having consolidated interim storage until people have a view that there is a long term answer.”

Her comments come after New Mexico Governor Michelle Lujan Grisham wrote a letter this week to the DOE opposing a proposed temporary nuclear waste storage site over concerns that it would pose problems for the state’s oil, gas and agriculture industries. The site is one of two, the other in west Texas, that typically is discussed with regard to temporary nuclear waste storage.